More than meets the eye?

Some medals which look superficially to be quite ordinary or to be nothing more than they seem can, with research, open up a career which is far beyond what the medal implies. This is, of course, the pleasure of medal collecting – to record a possibly neglected career or revive the memory of a person and his or her service.

The medal in question (shown below) is the Military General Service Medal, 1793-1814, with the single clasp Egypt. This clasp was, of course, something of an afterthought, not issued until 1850, so that many men who had already claimed their MGS medal did not get round to claiming the additional clasp a few years later. 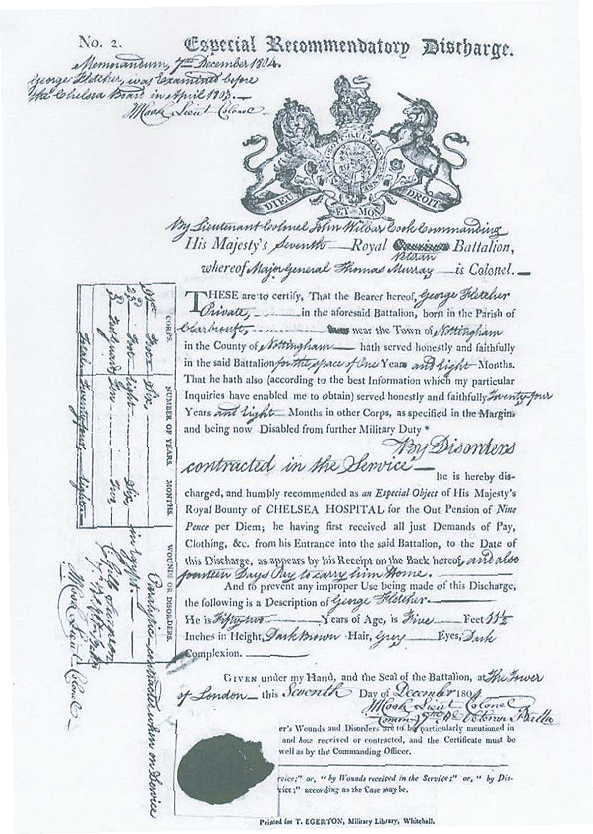 Fletcher’s service in the 3rd Foot Guards is easily related from his papers – he joined them on 14th March 1793 and was discharged on 15th April 1803 after just over 10 years’ service, then enlisting into the 7th Royal Veteran Battalion, which did duty at the Tower of London. These Veteran Battalions did exactly that sort of work – old, ill or wounded ex-soldiers who could still perform some sort of useful duty served in garrisons or as convoy, prisoner or recruit escorts etc. Fletcher ended his service with the 7th Veterans in December 1804, discharged as a result of “disorders contracted in the service” which included “paralysis contracted in Egypt” but he managed to find employment with the West India Dock Company in a post which he held for 36 years until about 1840.

However, more detailed research into Fletcher’s career reveals an extraordinary story above and beyond the experiences commemorated by his surviving medal. Fletcher lived in Poplar and came to dedicate himself fully to preaching and working with Sunday Schools in the East End docklands of London. He had clearly been of an evangelical bent throughout his career (“from six years of age he had been brought up in the tenets of Wesley and remained a member of that body until his death”) but had an entire “second career” as an active pastor following his final retirement from military service in 1804 and was often referred to as “the Rev. George Fletcher”. The remarkable thing is that, according to contemporary accounts, Fletcher went on preaching “two or three times a day … for the objects of benevolence and charity” into what even now would be regarded as extreme old age – 108 years.

As he became older and older, Fletcher became something of a celebrity – he drew huge congregations in the East End who came (one assumes) not just to hear the Gospel preached but to witness the spectacle of a man of his great age actually standing up in front of them and preaching. Using the new-fangled railways, he travelled extensively to other cities to preach, like Bristol and Nottingham, where he drew equally large and curious crowds.

His increasing age and popularity drew a great deal of press interest and in 1851 – when Fletcher was apparently 104 years old – the venerable Illustrated London News took an interest in him and arranged for his portrait photograph to be taken by Beard’s of King Wiliam St. in the City. It noted that although he was offered a “conveyance” to take him back and to, it was deemed remarkable that the old man simply walked all the way there and back. The original photo (I wonder where that is?) was printed and copies sold by Fletcher and his followers at his prayer meetings; it was later reproduced by the ILN (shown below – the image “flipped” by the process of printing). 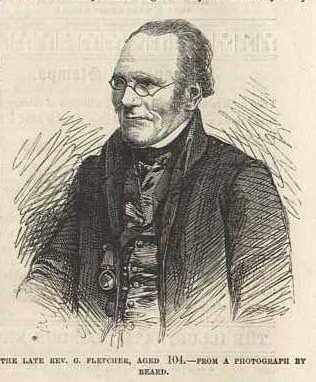 1851: taken from a photo – “flipped” in the process of printing (medal on wrong side)

When he died, the ILN recorded that :

“He spent eighty-three years of his life in active pursuits – he was twenty-one years a farmer [where?], twenty-six years he served his Sovereign in the Army – was at the battle of Bunker Hill and followed Abercrombie into Egypt where he gained the respect and esteem of his officers”, before thirty-six years with the Docks Company; the ILN records “his astonishing activity of mind and body, for which he was so remarkable.” 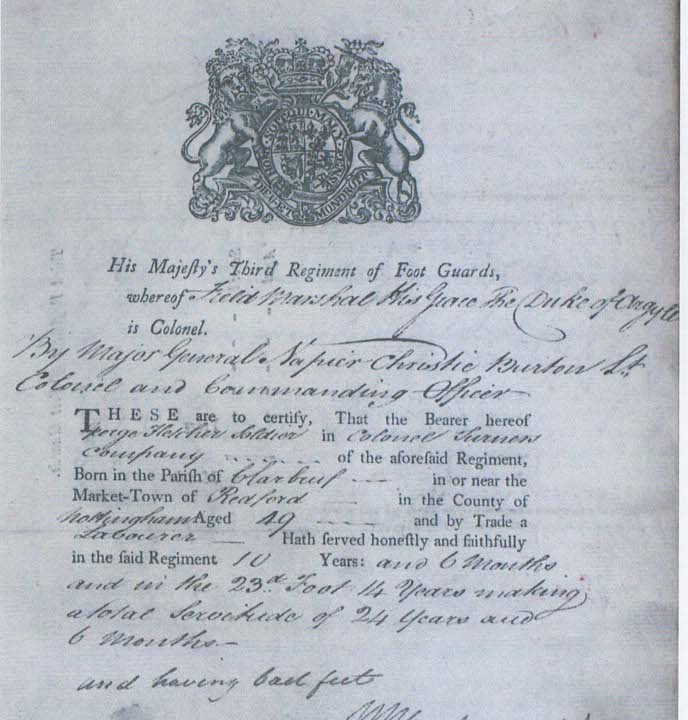 His career in the army and in the London docklands is perhaps nothing very remarkable, except for his stated age. But there is, again, more to say. When he preached, Fletcher was famous for using his own military service and experiences to illustrate or prove a point. In particular, he frequently referred to his service in the 23rd (Royal Welsh Fusileers) in the American Revolutionary War and more particularly his memories of the battle of Bunker Hill, fought on 17th June 1775, where, as he was fond of relating, he recalled the severity of the fighting and the cries of his wounded colleagues. It was a recurrent and often-recorded feature of his preaching.

This takes us much further back than Egypt in 1801. He was stated in later press accounts to have been born at Clarborough, Notts., in 1747 and would therefore have been 28 at Bunker Hill – perfectly possible. His discharge papers for the 3rd Guards in 1803 record his birth in “Clarbruf” and attestation in the regiment in 1793 and make the claim that Fletcher had already served for 14 years in the 23rd Foot, giving him just over 24 years’ service when discharged at the age of 49 in 1803 – which would give a birth date of 1754, not 1747 and of course too young to have been at Bunker Hill.  He is, however, recorded as deserting from the 23rd RWF in March 1792 but returning to military service in 1793 following a Royal Amnesty which allowed deserters to rejoin “before May 1793” without penalty. It was usual for such men to be posted to a different regiment – not the one they had abandoned! – hence his move into the 3rd Guards. 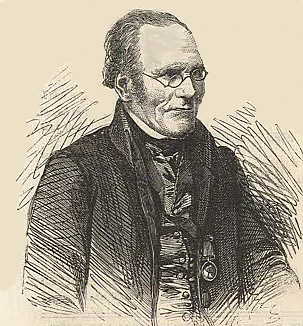 Fletcher died in Poplar in 1855 supposedly at the much-publicised age of 108 (= born 1747), but almost immediately serious doubts were publically raised about his real age and the veracity of his statements. It was widely cited that he had added various numbers of years to his age and that he was actually “only” 92 or 98 when he died. The Vicar of Clarborough was asked to investigate and stated that no “George Fletcher” appeared in their baptismal rolls until 1764 – seventeen years after Fletcher’s assumed birth date. This man did indeed enlist into the 23rd RWF (but in November 1785) and did desert in 1792 before joining the Guards in 1793 after the amnesty.

However, different official documents record different things. His discharge papers from the 7th Veteran Battalion in 1804 offer yet another scenario – that he had served for six years in the 91st Regt., then eight years and six months in the 23rd RWF and then ten years and two months in the Guards. Where the information on the 91st came from is unknown; it doesn’t occur anywhere else and wouldn’t put him in the Revolutionary War! However, this does give Fletcher service prior to 1804 of just over 24 years – which accords with his Guards’ papers, though it adds the 91st Regiment into the mix. 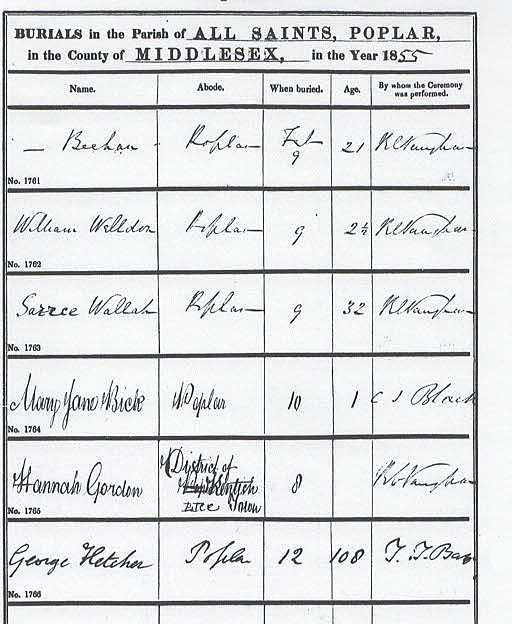 Burial register for All Saints, Poplar, recording Fletcher’s death at the age of 108 in 1855

Short of a detailed survey of the appropriate regimental muster rolls [not yet completed] which might actually sort out his presence in a regiment at a particular time, it looks as if all the details remain to be proved. Was Fletcher – perhaps, as some have suggested, under another name which he changed when he joined the Guards – actually at Bunker Hil in 1775?  He certainly made much of his supposed experiences at the battle. Or do we have to assume that the venerable pastor, who spent decades dedicating his life to evangelism, preaching before large audiences and talking about his time in the Revolutionary War, was just, as we might politely say, “economical with the truth”?