The Action at Matta Mughal Khel. 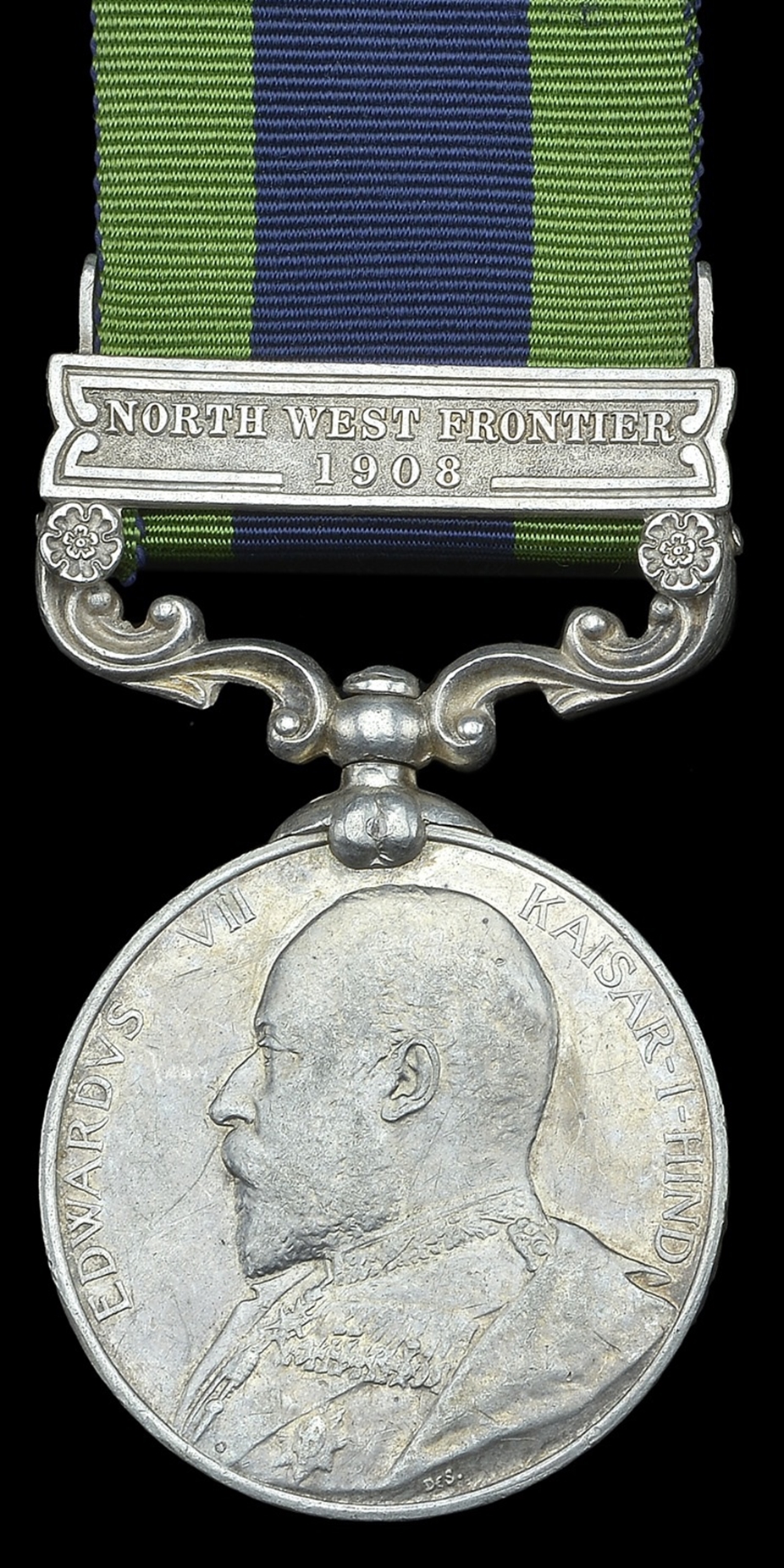 The death of Queen Victoria in 1901 might have been taken as an opportunity to institute a new India General Service Medal. The current one had been in use since 1895 (first awarded for the Defence and Relief of Chitral) but perhaps the authorities thought that the medal was too “new” to warrant a change of design as early as 1901. At any rate, when a clasp was awarded for service in Waziristan in 1901-02, the 1895 design was used, but with a new obverse effigy of Edward VII.

Not until the campaigns of 1908 – against the Zakka Khel in February and against the Mohmands in April-May – was thought given to a new India General Service Medal. The logic of altering the design for the new reign then seems by then to have become clear and a new version, the India General Service Medal 1908, was instituted. It bore the standard effigy and titles of Edward VII on the obverse and a depiction of the fortress of Jamrud, guarding the approaches to the Khyber Pass, on the reverse. This type, with its new ribbon, was to remain in use until the end of the reign of George V, its last clasp being North West Frontier 1935.

The campaigns on the North West Frontier which called forth the 1908 IGS have been consigned to the margins of military history. Commanded by Sir James Willcocks and dubbed “Willcocks’ Weekend Wars” by the satirical magazine Punch, that against the Zakka Khel in the Bazar Valley in February 1908 was indeed a short, sharp affair, with little serious fighting before the tribe sued for peace. It took the form of the usual destruction of tribal property and fortified towers – as carried out on frontier punitive expeditions since 1849. However, the Mohmand campaign of April-May was much more difficult. Like the Mahsuds of Waziristan, the Mohmands had been opponents of British authority from the time of their first contacts with it. Campaigns – for which medals or clasps had been awarded – had been waged against them since 1852 and were to continue to 1933. 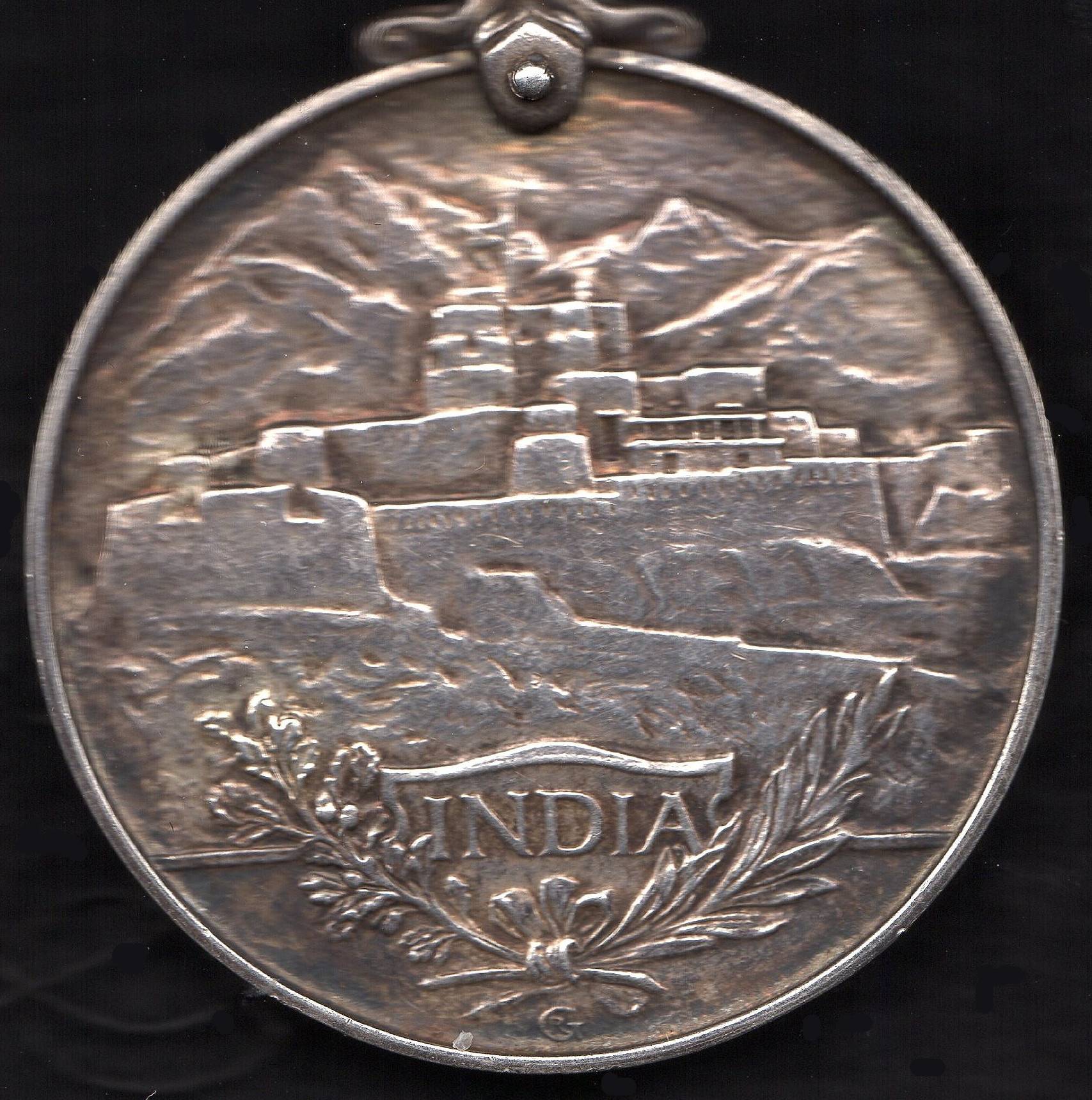 Reverse, showing Jamrud Fort in the mouth of the Khyber Pass.

The Mohmand campaign of 1908 produced only two or three large-scale actions which are worthy of note, one of them being fought near the village of Matta (or Matta Moghul Khel) on 24th April 1908.

Trouble between the British and the Mohmands had been flaring since the Zakka Khel campaign of February. The Mohmands reacted quickly to the British invasion of the Bazar Valley and there was strong support for the raising of a lashkar [tribal force] to go to the aid of the Zakka Khel. But potential Mohmand intervention was ended by the speed of Sir James Willcocks’ campaign and by the collapse of Zakka Khel opposition. Nevertheless, tension along the Mohmand frontier increased through March and April, with cross-border raids, minor clashes and sniping into border posts. At first, the British were inclined to do nothing – another expensive frontier campaign was not contemplated. However, as a security move, border posts and camps were reinforced from the garrison at Peshawar and it was hoped that the lashkars would simply disperse if not provoked. 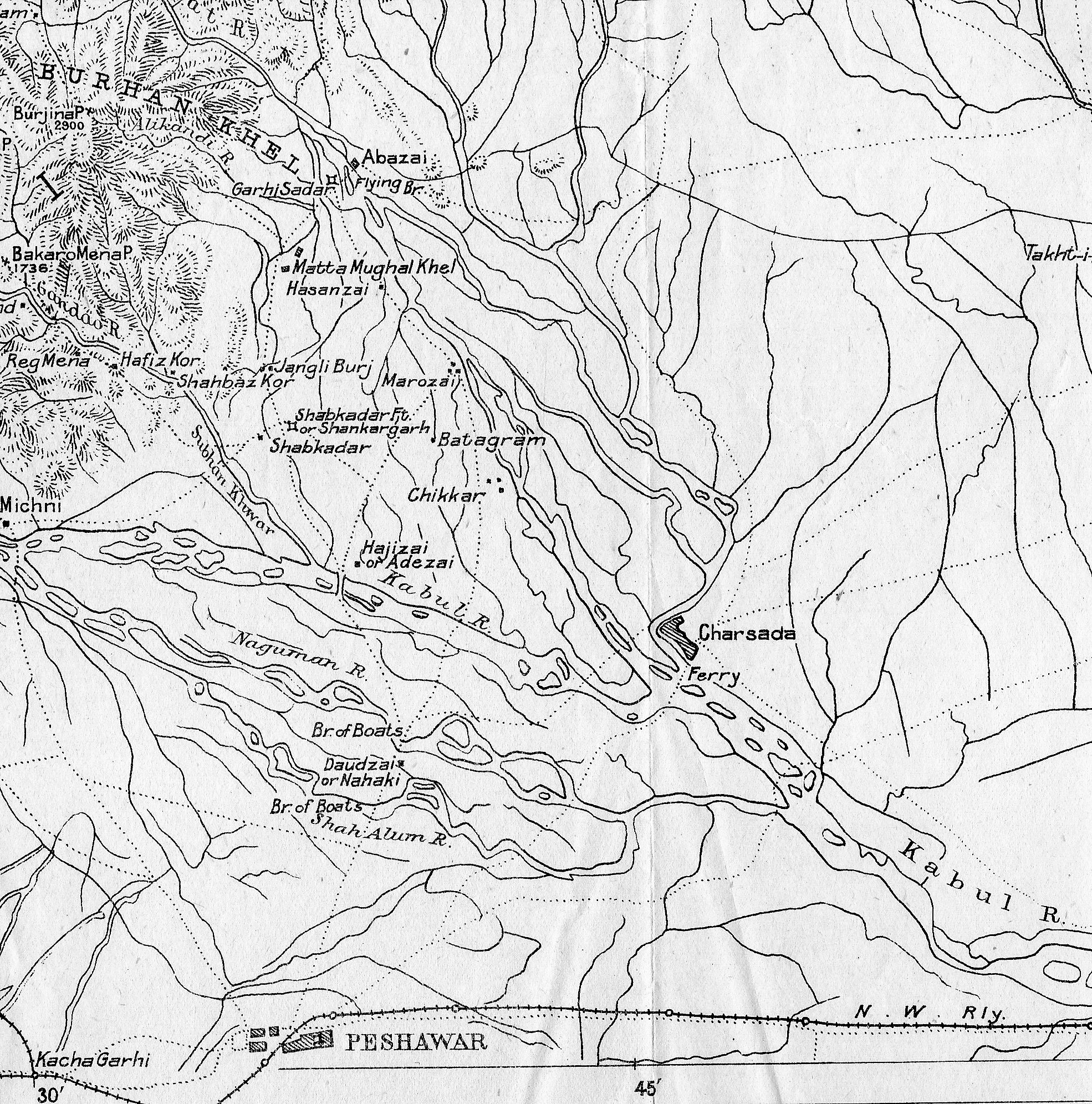 But it was not to be. By the 23rd April, lashkars of several thousand men were displaying their standards near Matta and in the mouth of the Gandao Valley and Alikandi Pass and had begun to construct sangars [stone breastworks] and other defensive works. That night, the tribesmen attacked Garhi Sadar and the fortified camp near the village of Matta; they also attempted to destroy one of the boat bridges which was vital to communication with Peshawar.

By this date, Sir James Willcocks, commanding the Peshawar Division, had assembled nearly 2,000 troops on the Mohmand border and decided to undertake a limited offensive to scatter the tribesmen before they grew any more dangerous. At dawn on April 24th 1908, two columns marched to attack the enemy. The Left Column, under Colonel Unwin, was little more than a reconnaissance in force, moving from Shabkadr Fort to Shahbaz Kor. It comprised the following troops :

400 men of the Seaforth Highlanders

100 men of the Royal Warwicks

Under cover of fire from the 18th Battery this force easily cleared the nearby sangars forming the far right flank of Mohmand positions in the foothills and drove the enemy towards Hafiz Kor. Having inflicted casualties on the enemy, Unwin then retired slowly – as ordered – towards Shabkadr. During the return march, the Seaforths, the 28th Punjabis and the Warwicks warded off all attacks, the only casualties being Lieut. Gray of the Seaforths and one Private wounded. This decisive movement by Unwin prevented the tribesmen from reinforcing those near Matta, where 8,000 tribesmen had constructed a series of defences which stretched for about one and a half miles along a line of low hills. It was these positions which were now attacked by a stronger Right Column under Brigadier General A. A. Anderson.

Anderson’s column was drawn from a mixture of scattered units :

From Abazai 250 of the 53rd Sikhs, Frontier Force.

From Gardi Sadar 200 of the 57th Rifles, Frontier Force.

300 of the 1st Royal Warwickshires.

250 of the Northumberland Fusiliers.

This gave Anderson a force of two squadrons of cavalry, four guns and about 1,150 infantry. The infantry were placed under the command of Lt. Col. R. A. Carruthers, 59th (Scinde) Rifles, and the cavalry under Colonel Biddulph, 19th Lancers. The whole force concentrated at Matta camp and then entered the foothills to the west. The slopes were covered with the flags and sangars of the tribesmen who were present in great strength, blocking the main road into Mohmand territory over the Alikandi Pass. With the 53rd and 57th kept back as a reserve – stationed to the right rear – Anderson brought forward the rest of his infantry in line and prepared a simple frontal attack. 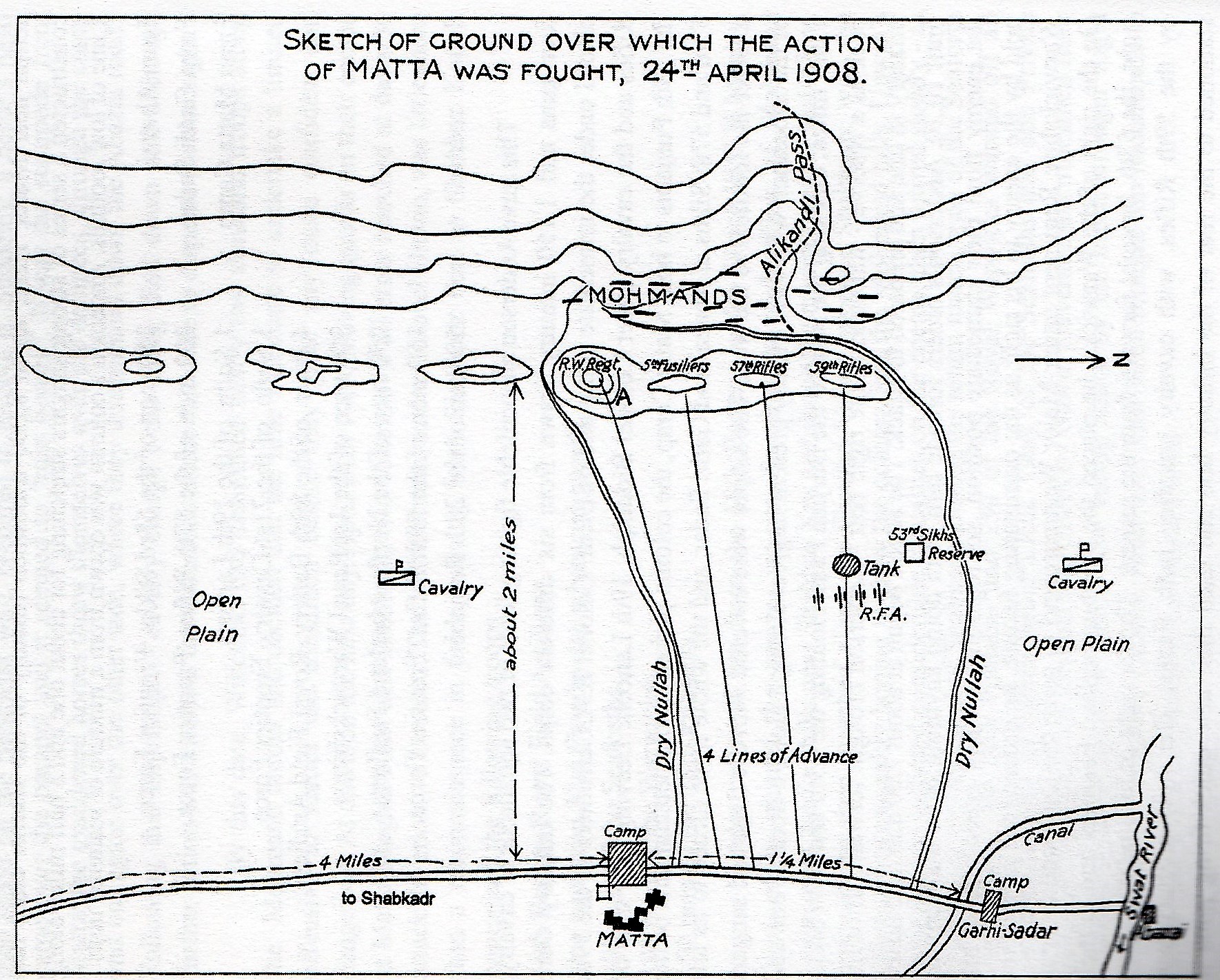 The action began about 7.00 a.m. and lasted until 10.20. Anderson’s orders forbade him from doing more than driving the enemy from their immediate position – since a larger punitive expedition was not authorised – so, regarding a small green-topped hill held by the Mohmands to his right as the dominating feature, he ordered the men of the Warwicks under Major Westmoreland to seize the knoll. On the right of the Warwicks, he placed the Northumberland Fusiliers and to their right, the 57th Rifles, brought forward from the reserve. The far right of his line was taken by the 59th Rifles, with cavalry guarding both flanks. The artillery was stationed to the rear of the infantry line and used new quick-firing guns in action for the first time. As the engagement developed, these were brought up successively closer to the fighting line and inflicted further casualties once the enemy began to retire.

The advance had not progressed far when the tribesmen opened a heavy fire, which grew in intensity as Anderson’s line drew nearer to the hills. The Warwicks charged straight on to their objective, the small hill, pushing parties up the slopes, then collecting together in an area of dead ground near the crest before rushing the summit with fixed bayonets and taking the hill “with great elan“. The Northumberlands, keeping level with the Warwicks, took their objective to the right with little opposition. The heaviest fighting fell upon the 57th Rifles and the 59th Rifles to the right of the British regiments. To their front, the ground was very broken and divided into a series of low ridges; here, the enemy defences were strongest and the opposition most fierce. The men went into the attack with the bayonet, the 59th led by Subadar Major Ditt Singh, and sangar after sangar was taken, but only after severe hand to hand fighting. Eventually, the position was won and the tribesmen fell back into the hills after having received – and given out – a fair degree of punishment. 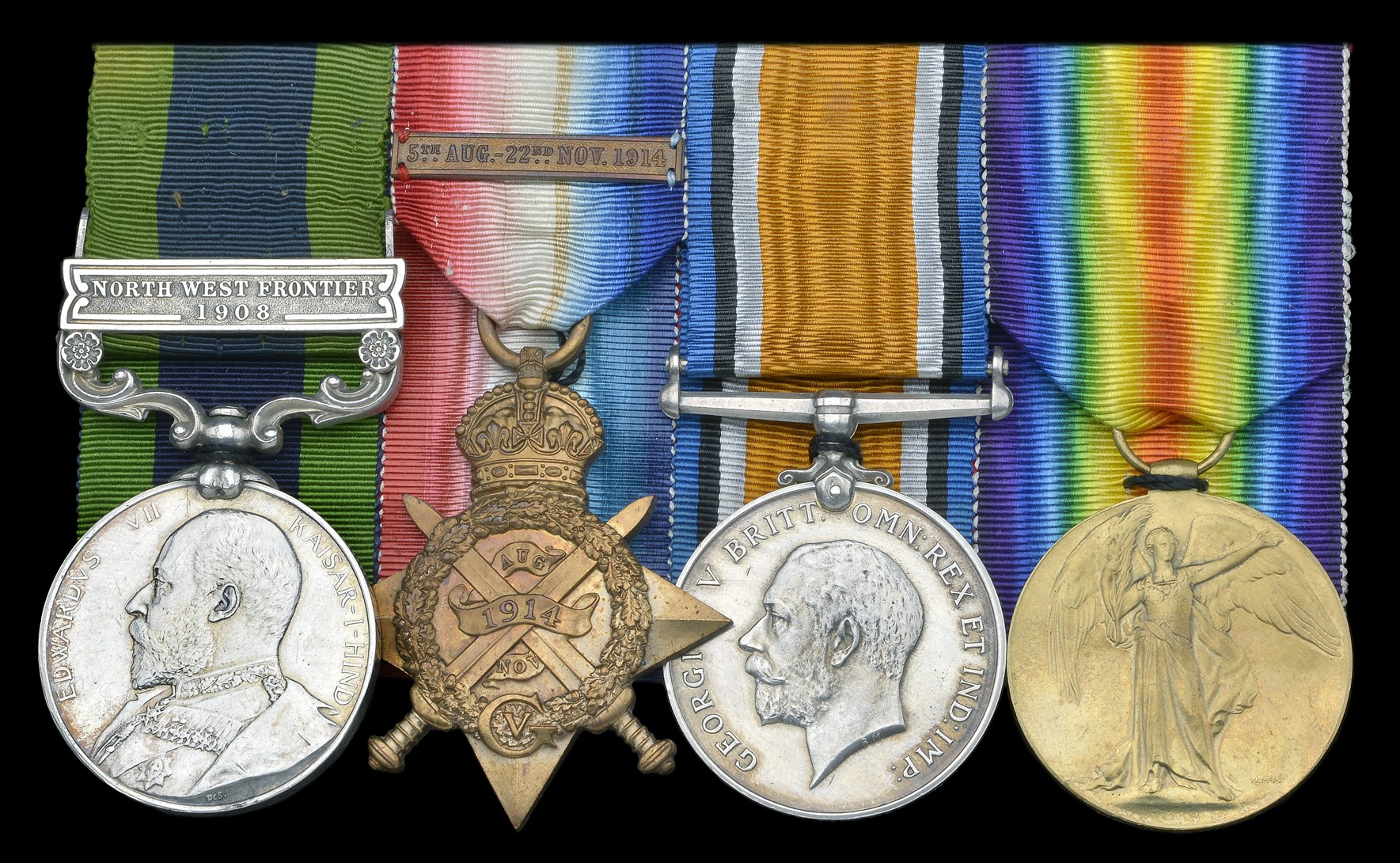 Group to an officer of the 59th Rifles, who was present at Matta.

Since Anderson’s attack had now achieved its objective – the first line of low hills – the troops were halted and were then ordered to retire. The return was carried out from the right, with the 57th and 59th leading the way towards Matta, followed by the Northumberlands and Warwicks. The green hill was the last point evacuated and only the last men to retire faced any further opposition. As Lieut. G. D. Martin and the last few men of the Warwicks cleared its base, they were attacked by a group of tribesmen who had made their way to the spot unseen along a nullah [dry river bed] which ran round the hill. Lieut. Martin was mortally wounded in the encounter – more or less in view of his brother, H. W. Martin, an officer of the 59th Rifles. Gunfire from the reserve and the 80th Battery quickly drove back the remaining tribesmen and the column returned to Matta camp with no further attempt by the enemy to get to grips. Speaking of the affair near Matta, the history of the 59th Rifles records :

This action at Matta was rather lost sight of in the larger expedition into Mohmand Land which followed it, but it was a noteworthy affair and was regarded by those who took part in it and in the subsequent expedition as the most important as well as the hardest fought action of the year.

The official dispatch agreed that Mohmand losses had been severe – perhaps up to 800 men – and that Anderson’s attack was carried “with the spirit and dash which are so characteristic of this fine soldier and [which] have earned him the respect of all who had the honour of serving with him in the field.” British casualties amounted to six killed (two of the Northumberland Fusiliers and four Indian soldiers) and fifty wounded.

Although Willcocks was able to write in his Dispatch that after Matta, no further attempts were made at raiding, night firing or crossing the border and that “the enemy had disappeared beyond reach“, he assumed that offensive operations were immediately called for and accordingly ordered the assembly of an expeditionary force to operate against the Mohmands, “to check [their] incessant raids…across our border and their wilful attacks on villages within the British Administrative boundary.”

Thus began the Mohmand campaign of April-May 1908 – which was to prove a far more arduous and difficult campaign than that fought earlier in the year against the Zakkha Khel. With medals with the clasp North West Frontier 1908 still fairly easily available (and reasonably cheap!) an interesting collection could be made of the various regiments represented in the two campaigns of 1908 – not forgetting the range of bronze versions to Indian “followers”.

The new IGS in bronze, as awarded to Indian non-combatants.