Recently, there were proposals to award a special medal to those ‘frontline’ NHS staff and associated services who had laboured (and still labour) with great dedication to combat the Covid virus which has swept among us. So far, nothing has come of these suggestions and perhaps the issue is so complex that nothing can or will be done in this respect.

France produced the most regular and organised system of awards for service in epidemics. In 1885, one of its series of ‘Medals of Honour’ (for long or distinguished service in a wide range of professions) was dedicated to those who fought outbreaks of epidemic disease in France and its empire. These medals (les médailles d’honneur des épidémies), of which several types were produced over the years, were awarded in various grades (bronze, silver, gilt and gold) well into modern times. The named medals are reasonably common on the market and fetch only tens of pounds – though those to British recipients are more popular in the UK and can be more expensive. Interestingly, it was announced in May 2020 that the medal is expected to be revived to reward those serving in the Covid outbreaks in France. 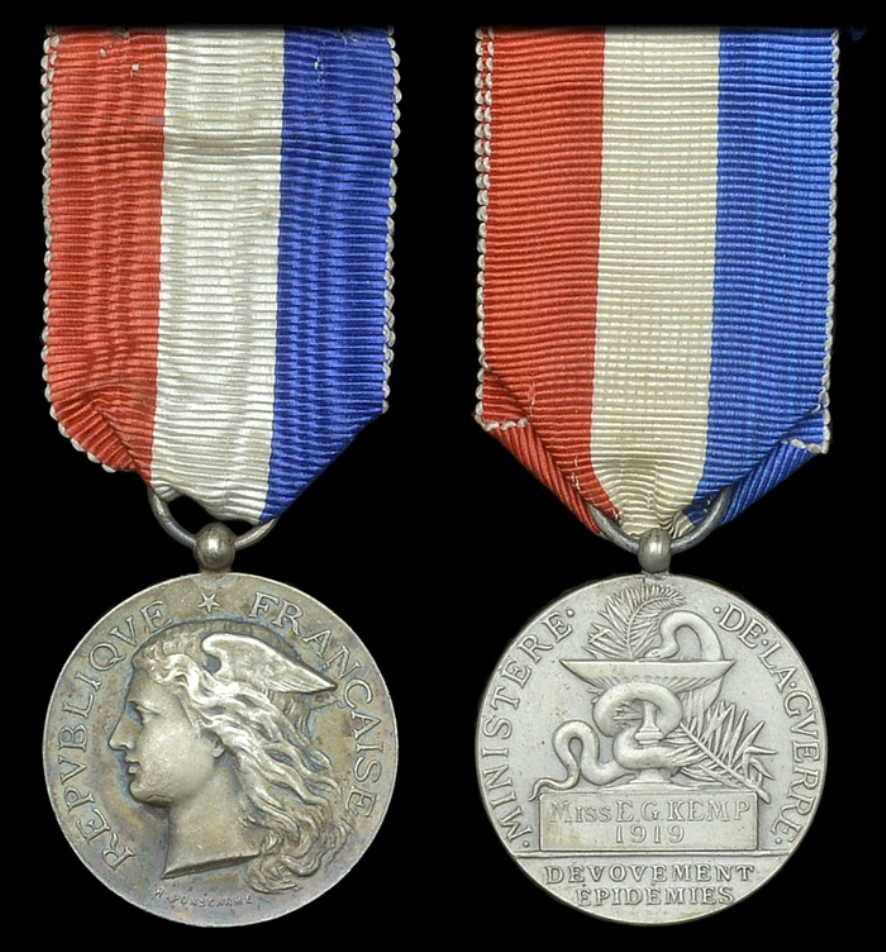 An example of the later (1914-18) French Medal of Honour for Epidemics. They are usually named to their recipient and awarded in various grades

Though Britain by no means escaped its own large-scale epidemics, like those which swept through its industrial towns in the 19th century, with major outbreaks of cholera in 1831 and 1854 for example, the British authorities never saw fit to issue a general medal to those who fought the diseases. Some local councils did issue commemorative medals to record the defeat of a particular outbreak (e.g. the Maidstone Typhoid outbreak of 1897) or create special awards to worthy individuals. 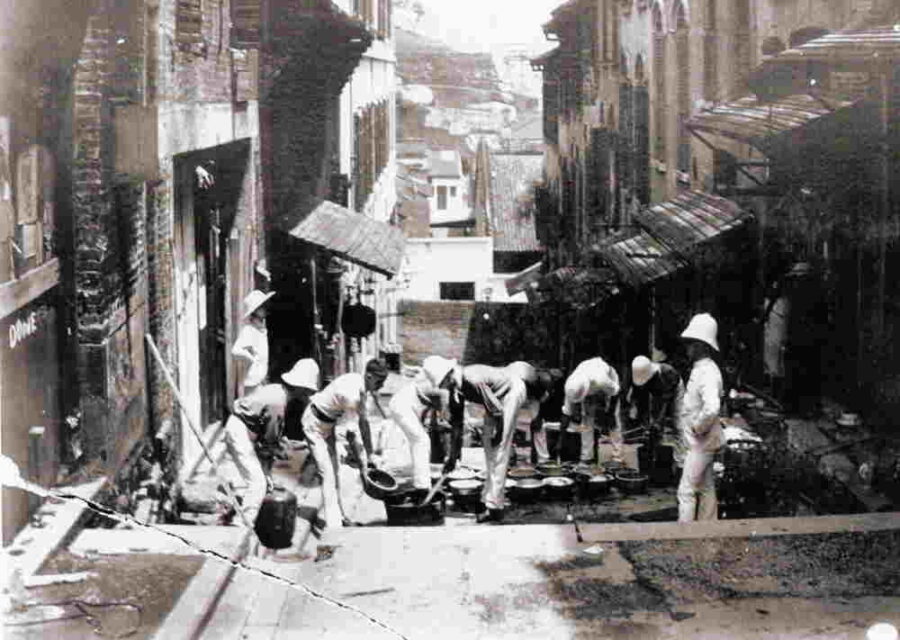 The nearest Britain got to a general medal for epidemic service was the well-known Hong Kong Plague Medal of 1894. In that year, an outbreak of the notorious Black Death – the infamous disease which had decimated Europe since the mid-14th century – hit the colony, having already caused terrible casualties in China. The outbreak was tackled by local civilians and volunteers from the naval and military forces in Hong Kong – mainly men of the 1st King’s Shropshire Light Infantry (about 600), Royal Engineers, police and naval personnel. These men took on the dangerous job of isolating plague areas, cleansing the streets, disinfecting houses and removing the dead. As a reward, the Hong Kong government conferred a special Plague Medal – well-known to collectors – in gold for officers and higher-ranking officials and in silver to Other Ranks. But since the medals were instituted by a colonial authority they were not deemed to be ‘official’ and whilst recipients were allowed to accept them as commemoratives they could not wear them in uniform (i.e. while still serving). It is perhaps for this reason that many turn up adapted as brooches or watch fobs or set into other artefacts. The largest single collection of these medals is displayed in the Soldiers of Shropshire museum in Shrewsbury Castle. 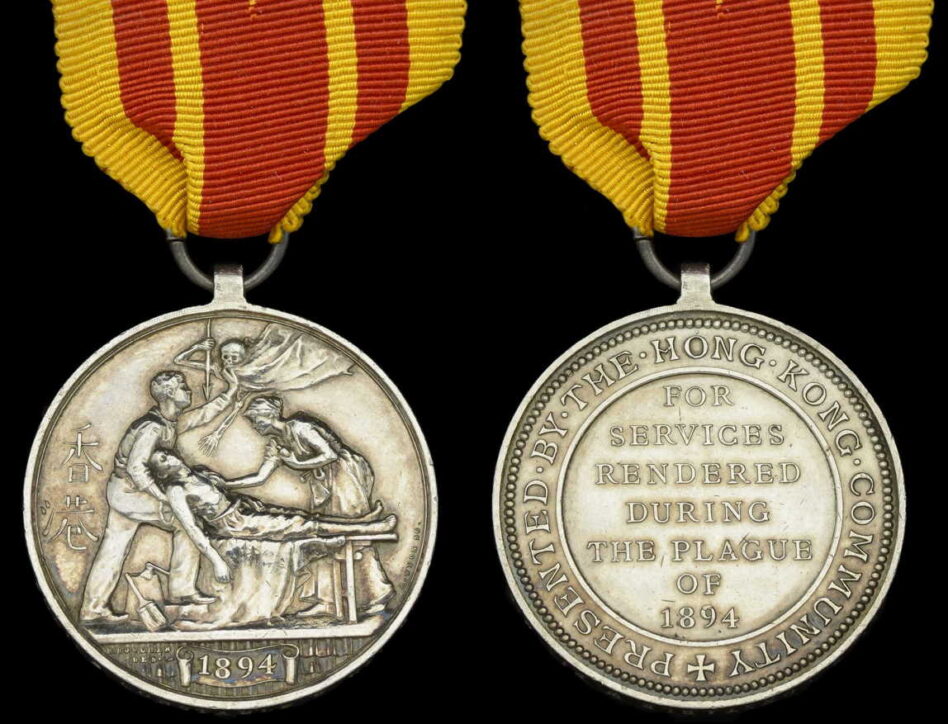 The Hong Kong Plague medal in silver. Most are found to men of 1/KSLI; others are much rarer

It is perhaps surprising that no special medals were awarded by any states to reward service during the terrible ‘Spanish Flu’ pandemic of 1918-20 which, as is well known, killed more people than the Great War (perhaps 50 million), though the French médailles d’honneur des épidémies continued in use. Again, perhaps the sheer scale of the pandemic made general awards too costly or impracticable, though it is known that individuals were sometimes rewarded with existing decorations for meritorious medical service or by specially created ‘one off’ awards.

[Left – The Meritorious Service Medal, of 1916-28 ‘immediate award’ type, given to Bandsmn F. Harrison, Northumberld. Fuslrs, for dedicated service in the typhus epidemic in Gardelegen p.o.w. camp in Germany 1917-18]

Ebola, the highly-infectious virus which can infect humans and other primates, was first recorded in the Democratic Republic of Congo in 1976 and cases spread rapidly through a number of sub-Saharan countries, such as Ivory Coast, Gabon, Mali and Senegal; it proved especially lethal in Liberia, Sierra Leone and Guinea, where there were many thousands of cases and thousands of deaths. In those three states, 28,600 cases and over 11,000 deaths were recorded. There were even cases reported as far apart as Italy, Russia, Spain, the USA and the UK but these were minor instances easily treated. As with other viruses, mutations of varying degrees of seriousness occurred, the fatality rate being between 20% and 90% depending on the strain. A major international medical response, organised under the auspices of the World Health Organisation, saw trained staff and equipment being sent from all over the world to contain the disease, isolate victims and treat the sick.

What is formally known as ‘The Ebola Medal for Service in West Africa’ or more simply as ‘the Ebola Medal’, was instituted to reward a range of people – specialist civilian medical staff, volunteers and service personnel – who rendered aid during the crisis as part of the United Kingdom’s response to the emergency; it ceased to be awarded after March 2016, with no further awards apparently contemplated – though this will be kept under review. Unfortunately, the date does not mark the end of the virus – there were outbreaks in the Democratic Republic of the Congo as recently as 2021; it remains a threat and as yet there is no definite cure. 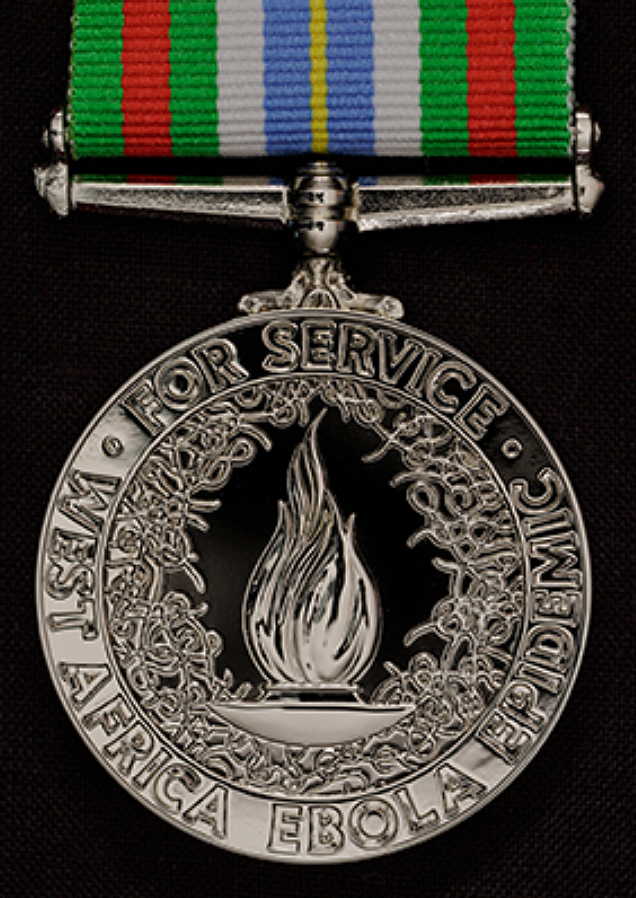 The reverse of the Ebola Medal

The medal was awarded to those working directly for HM Government or for NGOs (‘Non-Governmental Organisations’) which formed part of the UK’s formal response to the Ebola outbreak between March 2014 and March 2016. Given the age and range of Britain’s system of medallic awards, it it interesting that this is in fact the first official British medal for humanitarian medical aid. Awards covered service in “the geographical territories of Sierra Leone, Liberia, Guinea, and their territorial waters…. [which] have been defined by the World Health Organisation as having had “widespread and intense transmission” of the Ebola virus”. The commencement date for the medal, 23rd March 2014, reflected the date on which the World Health Organisation officially recognised the outbreak in West Africa; the full award terms are laid down in a Command Paper of 11th June 2015.

The circular medal was manufactured by Worcestershire Medal Service of Bromwich (as with a number of recent medals) and is of standard dimensions (36mm diameter), made in nickel-silver and suspended from its ribbon by a swivelling straight bar. The colourful striped ribbon combines the colours of the three West African states most severely affected by the virus.

The qualifying period for award is from 23rd March 2014 to 29th March 2016 and it is given for 21 days’ continuous service within the designated area or 30 days accumulated service on working visits of 48 hours or more. As is common with British awards, relevant service reduced prematurely by death, serious illness, evacuation or disability will be deemed to qualify. 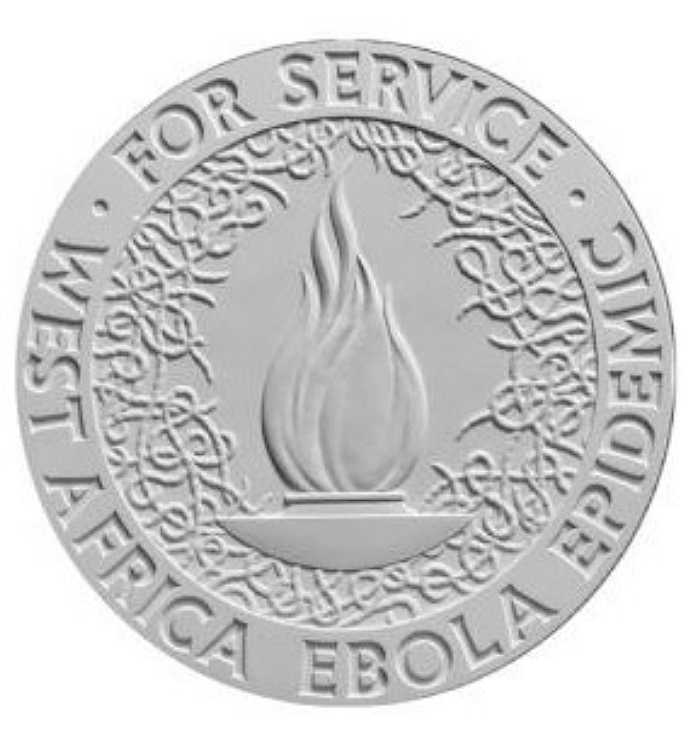 Design for the medal’s reverse

The Ebola Medal in its pale blue box of issue.

The obverse carries the modern profile of the Queen in the design by the sculptor Ian Rank-Broadley FRBS, who is well known as a coin designer and for a range of public statuary, including the recent statue of Princess Diana in Kensington Palace. The profile is surrounded by the usual legend ELIZABETH II DEI GRATIA REGINA FID.DEF. The striking reverse was designed by the sculptor John Bergdahl, known for his designs for the Royal Mint, and shows an ‘eternal flame’ symbolising Hope shining through a sinister background representing the spreading Ebola virus; above are the words ‘For Service’ and below ‘West Africa Ebola Epidemic’. As is usual with British awards, the medal carries the recipient’s details engraved around the rim.

Exact figures of issue are not available, but a figure of around 4,000 is often quoted. Not surprisingly, the medals are currently rare on the market.