However this confusion over which clasp Konitsky was actually entitled to or was awarded is just the beginning of a complex saga. He appears in fact five times on at least three different medals rolls for 1877-79 and served in at least four different colonial regiments.

Louis Bernard von Konitsky (in various spellings and with the “von” coming and going!) was born and baptised in Bremen in May 1851, the son of a merchant. Some of his siblings were born in France and Belgium. There was a significant Konitsky involvment in shipping in Bremen in the C19th, but whether L. B. Konitsky was a member of this branch of the family is not known. 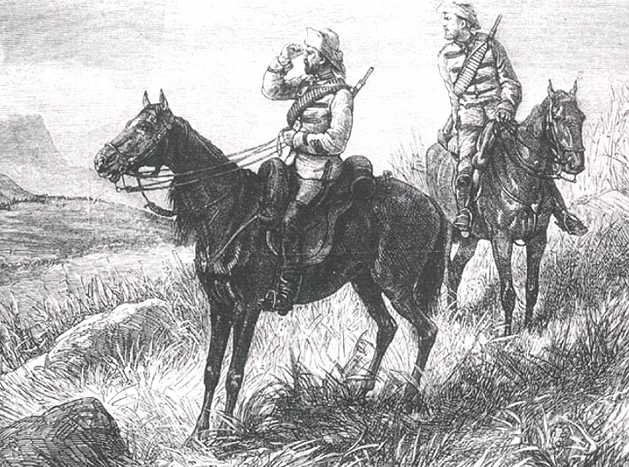 Konitsky had moved to South Africa by the mid 1870s and whilst living in Port Elizabeth in 1877, enlisted in September into Prince Alfred’s Volunteer Guard. The records show that he served with PAVG in the 9th Frontier War against the Gaika and Galecka, involved in operations from 10th October 1877 and, according to his service record, was present in the major action at umZintzani on 2nd December. He was discharged from PAVG at Port Elizabeth in December 1877.

134 South Africa medals were awarded to PAVG, of which 27 were returned to the Mint unclaimed or recipients unfound, which leaves 107 actual awards. Konitzky appears twice in their roll – once as Private L. B. “von Konitshi”, with medal and clasp “1877-78” (noted as returned to the Mint as late as 1911) and again as simple “Konitzky” and “rank unknown”, with clasp “1877-8-9”, which is not recorded as returned, so may well have been issued to him.

In March 1878, Konitsky enlisted into the Stutterheim Mounted Police, being promoted to Corporal on 1st April but on 5th May he is shown as joining the famous Frontier Light Horse at King William’s Town. With the FLH he took part in the 1st Sekhukuni (Bapedi) campaign late in 1878 and in the beginning of the Zulu War. He was present with the FLH in the early days of their service with Sir Evelyn Wood’s column and would have seen some arduous duty at the beginning of the Zulu campaign. However, he was one of over 70 men of the FLH who, as “time expired”, took their discharge at Kambula camp early in February 1879, just before the FLH became involved in the famous (or infamous) action at Hlobane in March. He accordingly appears on the FLH medal roll, with the clasp “1877-8-9” but this is recorded as “unclaimed” and later as “returned to the Mint”, in this case in December 1887. A man of this surname, but with different intials, also occurs in the roll of the Natal Light Horse, entitled to “1879”.

Obviously not quite finished with soldiering, Konitsky was in Luneburg in the Transvaal when he enlisted in Ferriera’s Horse on 27th Sept. 1879. This regiment served at the tail end of the Zulu War in the Northern Column on the Natal-Transvaal border and, on the conclusion of the war, was deployed in the 2nd Sekhukuni campaign. Konitsky was discharged in Pretoria on 23rd Dec. 1879.

His actual medal, as stated, now has the clasp “1878-9” – and it is of course possible that someone altered the clasp at a much later date. There may also be other medals out there named to him in the other units he served with – it is not an unknown occurrence with the colonial volunteers.

Various snippets of information on Konitsky’s later career are traceable. In the 1880s, he lived at Wepener and Helvetia in the Orange Free State and at one stage was recorded as a Burgher at Barberton. In the 1890s, he seems to have lived (at least for a while) at Potgietershoop near Piet Retief; there are various records in the Transvaal archives which mention him. Over the years, he followed different occupations, but in the main seems to have worked (after a spell at farming) as a book-keeper and clerk. He was involved as a successful plaintiff in a well-known High Court case in South Africa in 1893 and later that year visited England, reason unknown.

Louis Bernhard von Konitsky, then recorded as a storekeeper, died unmarried in the Central Hotel in Heidelberg in the Transvaal on 18th April 1904 aged 52. The story of his medal (or medals) and their possible clasp entitlements is a good indication of the complexity that can arise with these colonial volunteers, who moved on short-term appointments from regiment to regiment as circumstances or whim took them. If only they had known the trouble they would cause medal collectors! 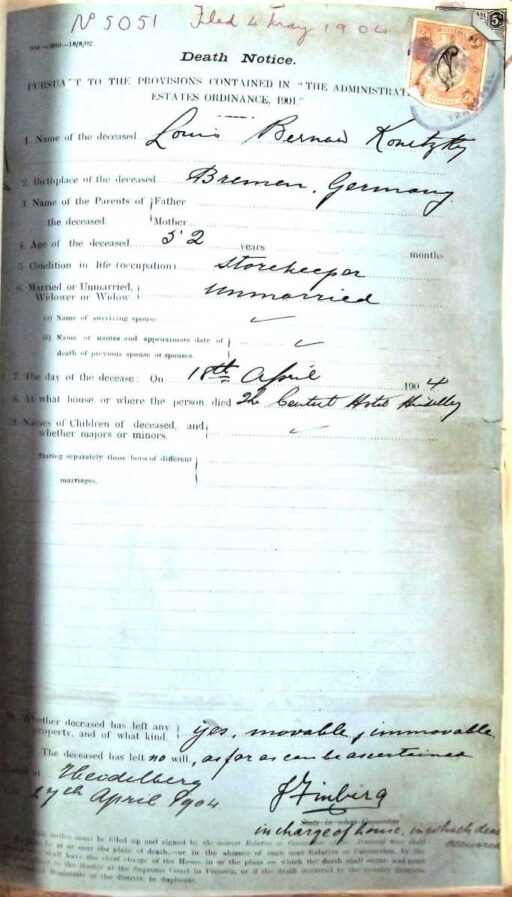