A Medal for the Suffragettes. 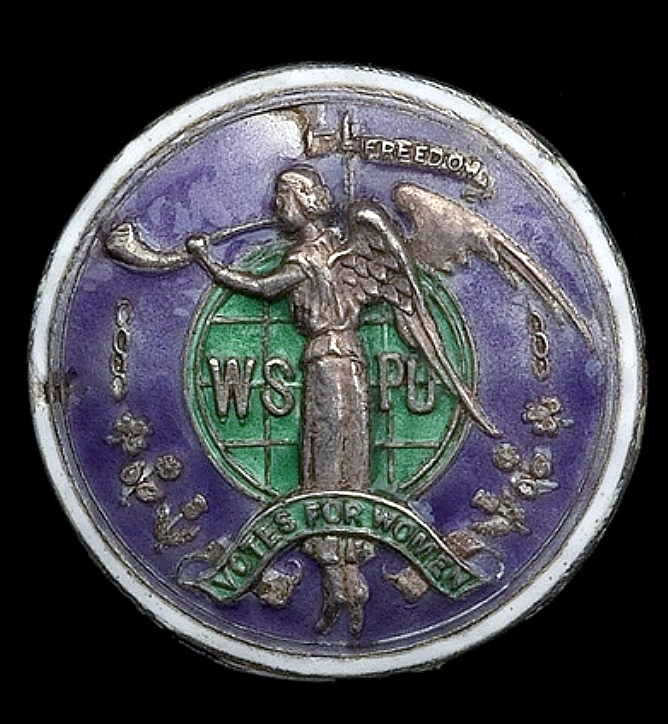 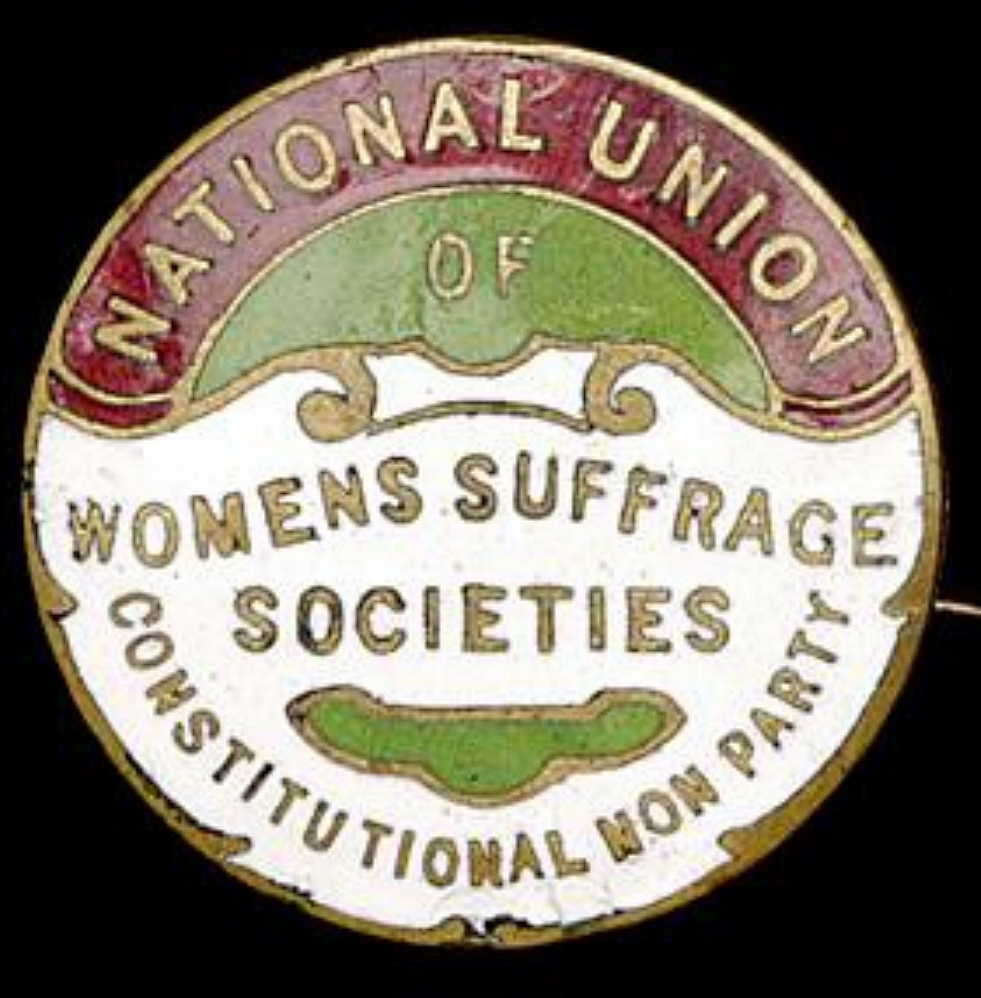 Brooch publicising the popular NUWSS; the WPSU was far from being the only suffragist society pressing for women’s votes.

The cause of women’s suffrage – achieving the right for women to vote on equal terms with male voters – is widely held to have been brought to the fore in the days before World War One by the activities of the Women’s Political and Social Union (WPSU) founded in Manchester in October 1903 by Emmeline and Christabel Pankhurst; members were referred to as ‘Suffragettes’ for the first time in 1906. But of course the cause of ‘votes for women’ in Britain can be traced back much further than that – perhaps to 1792 and Mary Wollstonecraft’s “Vindication of the Rights of Women” and to associations active throughout the C19th (necessarily supported by men and male politicians) which unsuccessfully pressed the issue. And the WPSU was by no means the only large-scale organisation active in the years before the First World War, to say nothing of professional groups (like the Actresses’ Franchise League) or local associations like the Manchester Women’s Suffrage Committee, founded in 1903. Other examples include the National Central Society for Women’s Suffrage, the Central Committee of the National Society for Women’s Suffrage (post 1888), the National Union of Women’s Suffrage Societies (of which the more militant WPSU was an offshoot) and the Women’s Freedom League founded in 1907. Many hoped that the powerful and reformist Liberal government after 1906 would support their cause and others put their faith in the support of the nascent Independent Labour Party and local trade unions. In fact, Britain was rather slow (for a professedly advanced ‘liberal’ country) in granting voting rights to women. As early as 1869, the women of Wyoming (USA) gained the right to vote, followed by New Zealand in 1893, the new Commonwealth of Australia in 1902, Finland in 1907, Norway in 1908, Denmark and Iceland in 1915 and Canada, Germany and Poland in 1918 – which is when Britain’s first and limited act for female suffrage was enacted.

Nevertheless, we can be certain that as a result of the activities of these suffragist groups and their supporters in and out of politics, ‘votes for women’ came to have mass support in the UK. Marches attracted often huge numbers of militant and non-militant supporters, male and female, from all walks of life. The Women’s Sunday Procession in June 1908, for example, attracted more than 300,000 banner-waving protesters in London and with an estimated membership of 50,000 by 1914, the NUWSS was far better supported than the more middle-class WPSU with perhaps only 5,000. 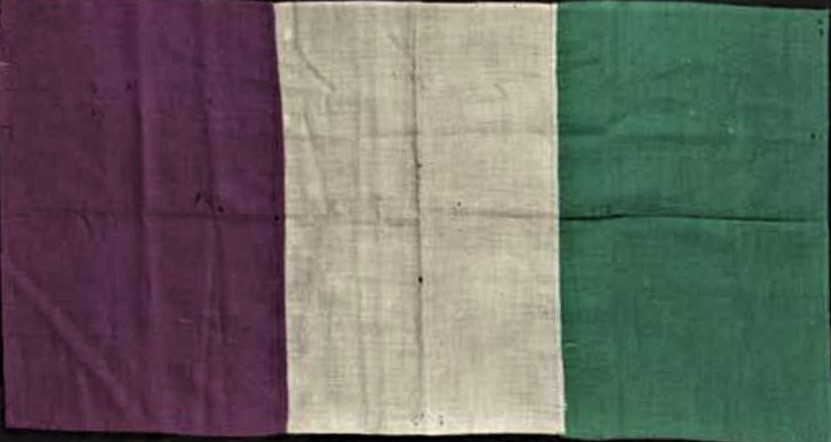 A rally flag of the WPSU

To publicise their cause – which they did very well – the women’s suffrage movement (whether the WPSU itself or related organisations) produced a wealth of badges, ceramics, household wares, medallions, ribbons, sashes, posters and souvenirs, all of which are seriously collected nowadays and can command high prices – albeit that most of them were sold for a matter of pence at the time to fund the various pro-suffrage activities. Articles of ladies’ clothing were also produced in the WPSU suffragette colours and even, it is said, ‘unmentionable’ items of ladies’ underwear – which might have shocked a non-suffragist husband!

Items like these were sold at rallies or fairs for the benefit of the cause and, for the WPSU, often incorporated purple, white and green, the official colours of the union. These corporate colours were revealed for the first time in a massive Women’s Sunday Procession and Rally in London in 1908. Supporters of the WPSU were supposed to wear their badges, sashes and hat ribbons to similar protest meetings in which many thousands of marchers could turn out in cities throughout the UK.

For wealthy supporters, the three WPSU suffragette colours could be translated into pieces of bespoke jewellery at whatever cost one might want to pay. For example, in the Mappin and Webb catalogue for Christmas 1908 – truly a high-end source – there is a whole page dedicated to ‘Suffragette Jewellery’, featuring pieces in enamel and gemstones, with brooches and pendants in gold set with emeralds, pearls and amethysts in the relevant colours and costing from £2-£6. The more expensive pieces represented almost a week’s wages for a domestic servant!

But all that Glisters is not Gold! One problem for collectors nowadays is that there is a tendency to assume that any piece of jewellery featuring these three colours, or with these prominent amongst others, must be a visible token of support for female suffrage – which clearly may not be the case. Nevertheless, such items, even with no provable link to ‘the cause’, can be expensive purely because of an assumed association. Provenance is important with such pieces. 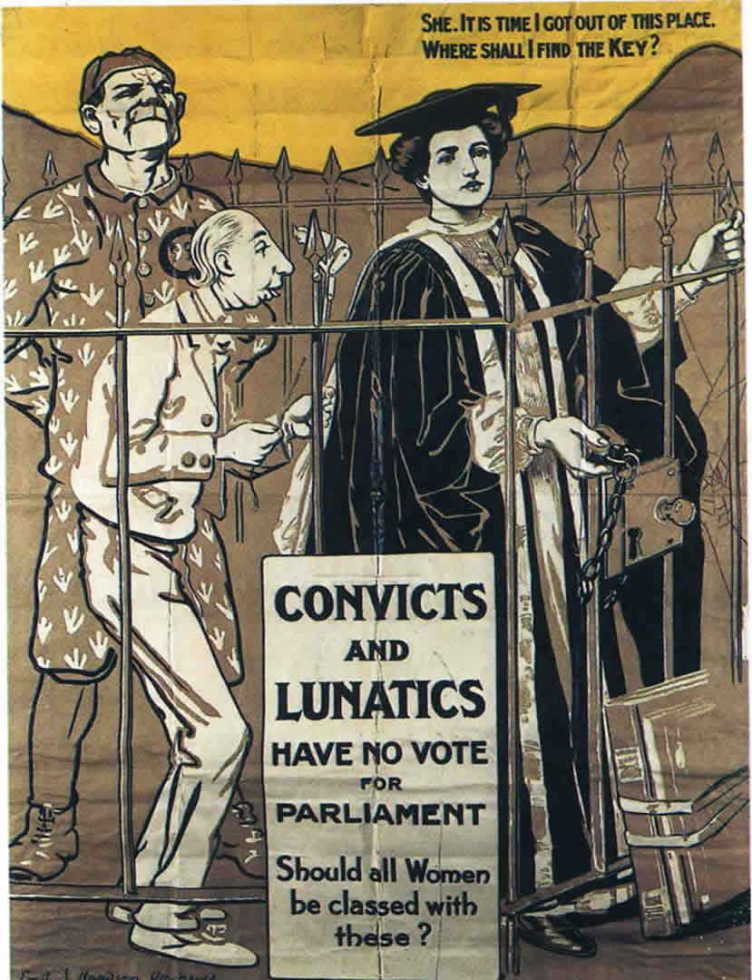 One of many different Suffragette posters – this one showing that women (even graduates like the one depicted) shared with criminals and lunatics the inability to vote.

The suffragette acts of militancy by the WPSU, from which they drew enormous national publicity, are well-known and well-recorded – from Emily Davison’s fatal attempt to stop the King’s horse at Epsom in 1913, to ‘direct action’, like attacking works of art in galleries (such as the famous axe attack on the ‘Rokeby Venus’ in the National Gallery), burning ballot boxes and other acts of arson, chaining oneself to railings and doors in very public positions, heckling at prominent political events, throwing ink at famous people, window-breaking and obstruction incidents at Downing Street, the Home Office, the Colonial Office, Piccadilly Circus etc.

It is common knowledge that many of the suffragettes who were arrested for their various misdemeanours (some seeming very slight to modern sensibilities and carrying over-severe sentences) went on hunger strike to increase the publicity value drawn out of the circumstances of their initial action, arrest, trial and imprisonment. It is equally well-known that many of the hunger strikers faced the barbaric, physically invasive and even dangerous act of force-feeding, with prison staff forcibly holding down the victim while liquid food (like cocoa or bovril) or medicine was forced down their throat or through the nose. Force-feeding could be repeated throughout the day and over a period of many days. It is estimated that the number of women who went to prison specifically over suffrage was more than 1,000, but many more were imprisoned locally under public order offences and are not easy to identify. Neither do we know exactly how many went on hunger strike or were force fed.

This sort of forced treatment received very bad publicity at the time and was widely regarded as cruel and excessive. So many female prisoners suffered serious effects from both their hunger strike and the physical assault on them that the Liberal government responded with one of the most unusual (to say the least) pieces of legislation ever enacted. The 1913 ‘Prisoners (Temporary Discharge for Ill Health) Act’ provided that women prisoners could be let out on licence to recover their health but would be required to present themselves to the authorities, once deemed to be recovered, to continue their sentences. 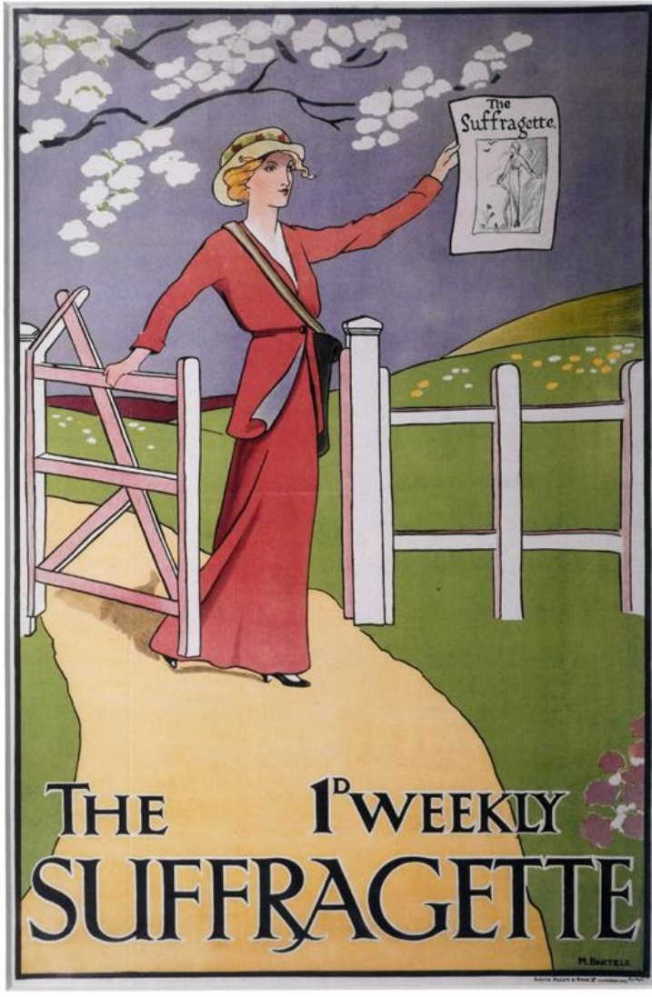 The cover of “The Suffragette” – one of a number of suffragist magazines which publicised the cause. 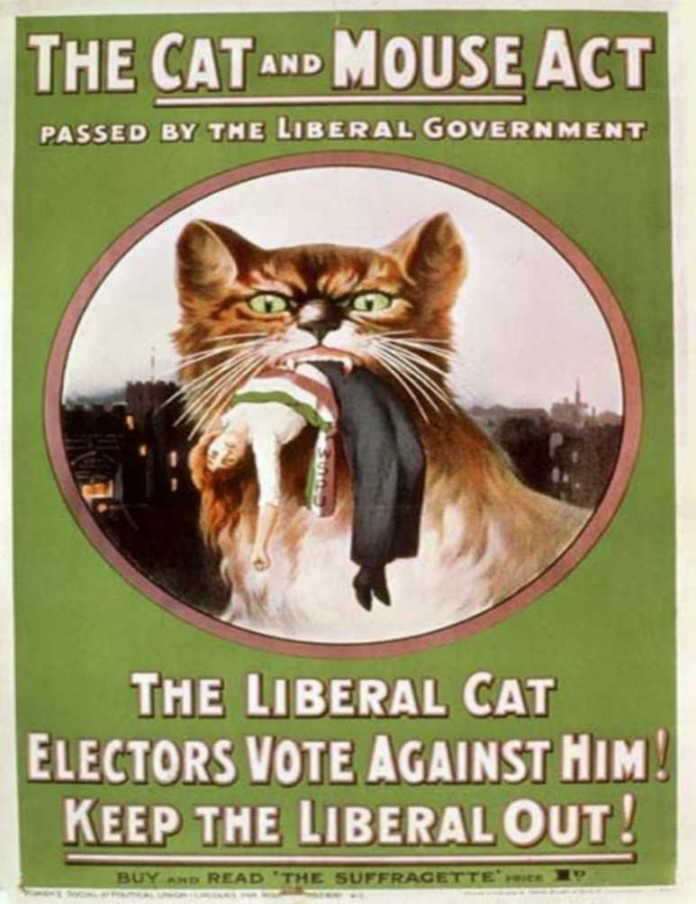 Many Suffragettes ignored this requirement and made strenuous attempts to evade re-arrest – hence they could not live at home or attend meetings or even be seen in public. Not surprisingly, the 1913 Act became known as ‘the Cat and Mouse Act’, the Police or authorities being the cats and the women the mice. In effect, the Act simply created a vicious circle, with women whose health was damaged being temporarily released from prison to recover, only to be returned to prison when they were fit enough to complete their sentence. There was even a government proposal to certify suffragettes and put them in criminal lunatic asylums and many were threatened with this punishment.

From the collectors’ point of view, one interesting response to the bravery shown by suffragettes in risking actual imprisonment and hunger-strikes and the indignity of force feeding, was the production of the well-known (but nowadays rare) WPSU ‘Hunger Strike’ medal.

These hall-marked silver medals were first presented by the WSPU at a ceremony in London early in August 1909 and were given to women who had gone on hunger strike while serving a prison sentence as punishment for an act of suffragette militancy. They were produced by Messrs. Toye, the well-known Clerkenwell medallists and jewellers (ancestors of the present Toye, Kenning and Spencer) who charged £1 each for them. This is a very far remove from their present market value of thousands (or even tens of thousands) of pounds each. Associated paperwork, ephemera or photographs can increase their value considerably, depending on the recipient’s fame (or infamy!) 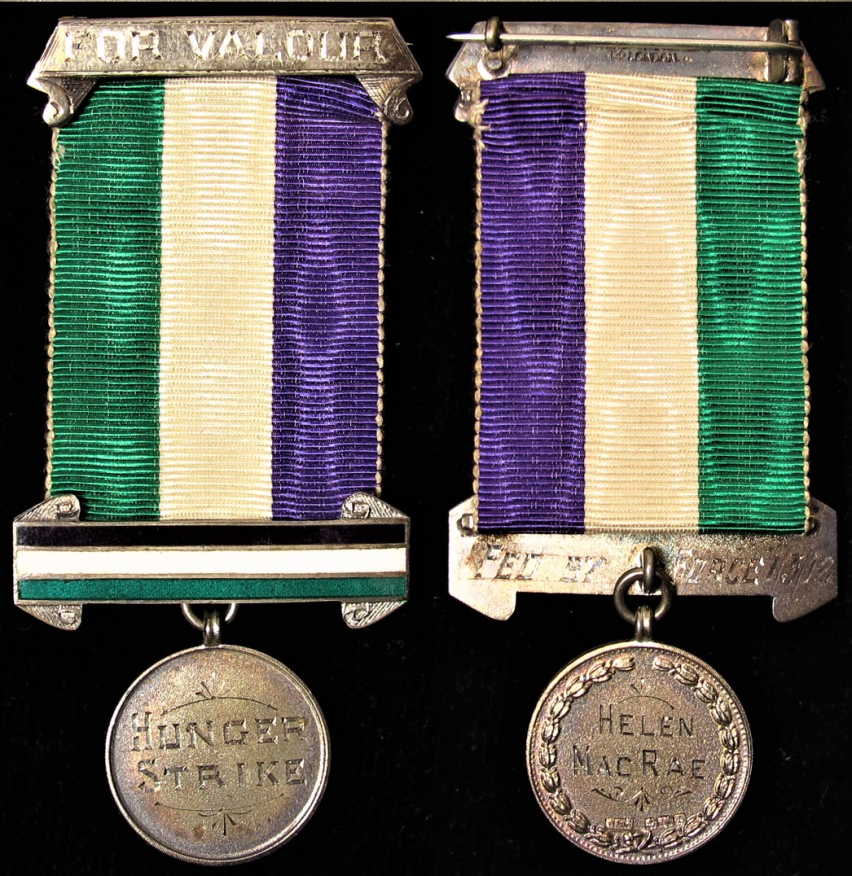 The medals comprise a silver pin bar engraved ‘For Valour’, hanging from a length of ribbon in the purple, white and green colours of the WPSU; these colours, approved by the WPSU in 1908, are taken to represent the ‘purple blood’ of royalty said to flow in all our veins, white for the purity and dignity of women and green for hope – as for a new Spring of political freedom.

There is often a top-bar in silver engraved with a date denoting the day of the recipient’s arrest. The enamelled purple, white and green bars are engraved on the reverse with (for example) ‘Fed by Force…’ and a date or dates; some cover long periods. Many of the known medals, such as that worn by Emily Davison, carry more than one dated bar, indicating multiple arrests and hunger strikes. Eight bars is the most recorded.

Each medal was presented in a purple box, with a green velvet lining. The lid was lined with white silk on which was printed in gold : ‘Presented to ….. by the Women’s Social and Political Union in recognition of a gallant action, whereby through endurance to the last extremity of hunger and hardship a great principle of political justice was vindicated’. 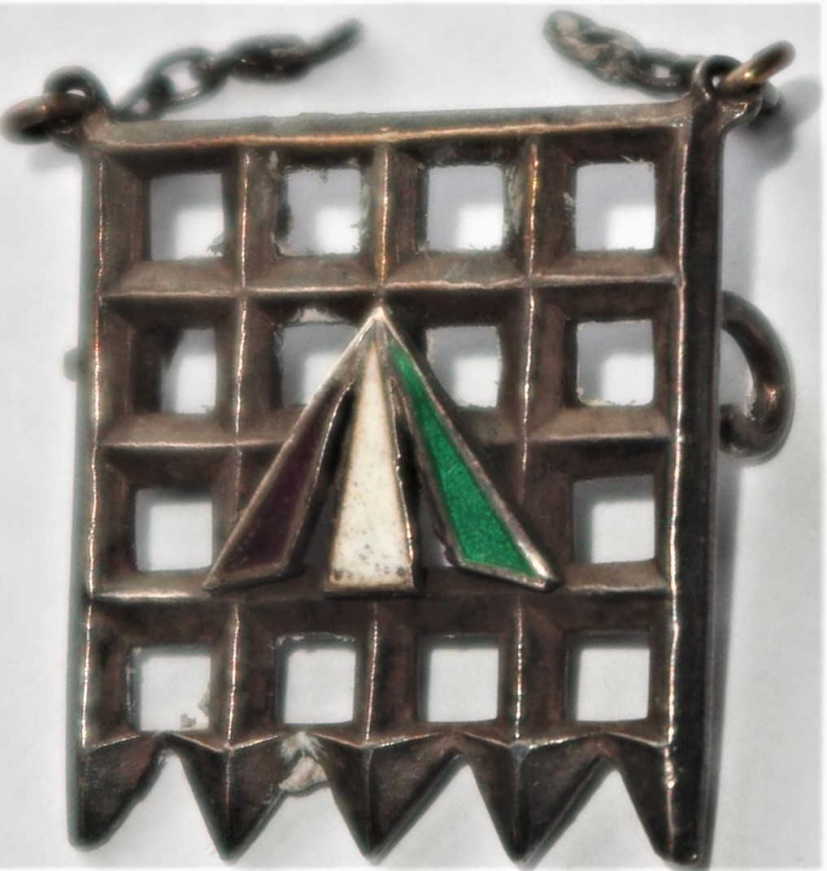 An example of the silver “Holloway” badge.

A modern reproduction of the portcullis badge.

A device frequently seen attached to the ribbon of these medals (and awarded at the time as a simple brooch) is a sliver pin-backed badge, featuring the chained portcullis derived from the arms of the City of Westminster (and hence incorporating in its symbolism the House of Commons) on which is superimposed the well-known government ‘broad arrow’ symbol (enamelled in purple, white and green), as used on convict garments and representing imprisonment. Described as the ‘Victoria Cross of the Union’ it was worn by or presented to women who had been imprisoned and is often referred to a ‘the Holloway Badge’ after that prison; Emmeline Pankhurst is often seen wearing one in contemporary photographs. Designed by Sylvia Pankhurst, the badge was first referred to in the suffragist newspaper ‘Votes for Women’ on 16th April 1909 and first presented to ex-suffragette prisoners at a mass demonstration at the Albert Hall on 29th April 1909. This was held to coincide with the meeting in London of the International Woman Suffrage Alliance and to honour the sacrifice of a large number of ex-WSPU prisoners on the platform. The ceremonial presentation to them of the first ‘Holloway’ brooches was intended to make an international impression. As with other WPSU artefacts, original examples (which are sometimes named and/or bear the date of imprisonment) can fetch large prices but there are many modern reproductions on the market. 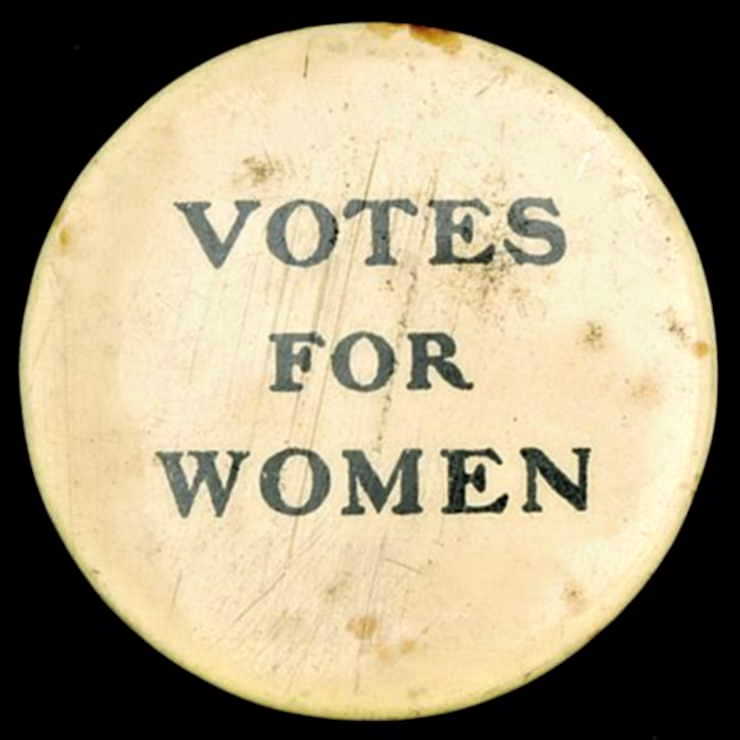