Medal collectors will be familiar with the fact that British soldiers serving in the Sudan from 1884 onwards were also awarded medals by the titular ruler of Egypt, the Khedive. This was because the Sudan was a subject province of Egypt and British actions in the Sudan were, technically at least, on behalf of the authority of the Khedive. Of course, Great Britain had her own strategic and commercial reasons for wishing to secure the Nile Valley and fend off potential foreign rivals like the French. But from 1882 onwards, when Britain intervened in Egypt to prop up Khedival rule, it was convenient to maintain the public stance that British action was in support of the Khedive’s authority.

The Khedive duly granted three types of medal to British, Egyptian, Sudanese and Indian soldiers and sailors who campaigned ‘on his behalf’ in the Sudan. The first type was the very familiar “Khedive’s Star”, issued for campaigns between 1882 and 1891. These were followed by the Khedive’s Sudan Medal of 1896-1908 with 15 possible clasps and its successor the Khedive’s Sudan Medal of 1910-22 with 16 possible clasps. Most of the clasps issued on these medals – with the exception of the “main” British actions on the Atbara and before Khartoum in 1898 – have been consigned well and truly to the dustbin of history. Most, if they are recalled at all, are simply place names on a map and few mean anything to other than very specialist medal collectors and historians. Without diving for the reference books, what remains in the public mind of campaigns and battles at Gedaref, Jerok, Katfia and Talodi (1896-1908 medal) or Mandal, Miri and Nyala (1910-22 medal); absolutely nothing I suspect!

This reflection of service in the remotest and most “difficult” areas of the Empire was brought home to me recently when I saw a group to a Royal Engineer, Charlie (sic) Lavis Perkins. Perkins, a plumber from Hatherleigh in Devon, had enlisted in 1894 and earned the Queen’s South Africa Medal with three state clasps, the King’s South Africa with the usual two clasps and later the Imperial Service Medal for Post Office telegraphs’ service. But at the end of his group he had the Khedive’s Sudan medal, 1896-1908, with the clasp “Sudan 1899”. This is a rare clasp – I don’t recall seeing another to an “other ranks” in the British army. On examination, the medal was even more interesting in that it was clearly “officially” named – in exactly the same style of elegant italic script found on RE medals for South Africa (and on Perkins’ own QSA) and on those of other Corps and some officers. Any medal book you care to examine will say that these 1896-1908 Khedive’s medals were issued unnamed, though frequently (as with clasp “Khartoum”) found privately or regimentally engraved. Perkins’ medal was clearly named at exactly the same time as his QSA and in the same official style – and I’m sure that other medals with this clasp should be found named in the same style.

The next thing to exercise my mind was what had a Royal Engineer Sapper been doing in the Sudan in 1899 to earn the medal? Another dash for the reference books, like “the Bible”, British Battles and Medals, produced only annoyance – they all simply stated the obvious, viz. that the medal and clasp were awarded for service on the Blue or White Nile south of Khartoum in 1899. Not very helpful!

Perkins was not on the medal roll for the British 1896-98 Sudan medal, so one obvious answer was that he was caught up in the fighting south of Khartoum after Kitchener’s great victory at Omdurman in September 1898. Though this battle effectively destroyed the Khalifate in the northern Sudan, it by no means finished off either the Khalifa, the sizeable remains of his army or the support he enjoyed in the south. Further military operations against the remnant Khalifate south of Khartoum were placed in the hands of Colonel Reginald Wingate, eventual successor to Kitchener as Sirdar of the Egyptian Army. In a series of operations in the eastern Sudan late in 1898 and along the Nile in 1899, culminating in the fierce battle of Gedid on Nov. 22nd 1899, the Khalifa himself was killed and most of his army destroyed. It was this action late in 1899, rather than that just that at Omdurman a year earlier, which effectively completed the Anglo-Egyptian subjugation of the Sudan.

All this looked very interesting and I was anxious to find out what exactly the Royal Engineers did in all this. The surprising answer was: nothing at all. In his excellent history, The Royal Engineers in Egypt and the Sudan, Col. E.W.C. Sandes makes it clear that there was no RE presence at all in the final campaigns of 1898 and 1899 along the Nile – i.e. with the actual fighting columns. However, he does have a chapter that seems to clear up the problem of what Sapper Perkins might have been doing. In the wake of the Anglo-Egyptian reconquest, it was decided to extend the system of telegraph lines as far as possible along the Blue and White Niles south of Khartoum. This sounds straightforward – but given the fact that these areas were still potentially dangerous, that they had hardly been mapped, let alone “secured” and that the terrain and climate were amongst the most inhospitable you could wish to meet, it is remarkable that the British authorities even considered constructing telegraph lines in that region at that time.

But the British were anxious to extend a communications’ system, which would eventually include a railway network, deep into the headwaters of the Nile. The Fashoda Crisis with France over the Nile as recently as Oct.–Nov. 1898 had awakened the British authorities to the dangerous possibility of “foreign” intervention in the Nile Valley. Given Britain’s serious concern over the security of the Nile, over Egypt and ultimately over the Suez Canal, a foreign “presence” was not acceptable. The British wanted a system which would allow information to be transmitted rapidly from the Sudan to Cairo and, ultimately, the ability to send troops to any threatened spot by rail.

Accordingly, in January 1899, a small RE party of three officers – Lieuts. J. S. Liddell, G. B. Roberts and W. S. Douglas – and 24 men, all specialists from the 2nd Telegraph Battalion, was dispatched to Khartoum. They then began a remarkable progress along both of the Niles, the Blue and the White. Employing local labourers, many of whom had very recently fought against the British, this group supervised the construction of hundreds of miles of telegraph lines in the most inhospitable terrain and climate and at minimal cost. 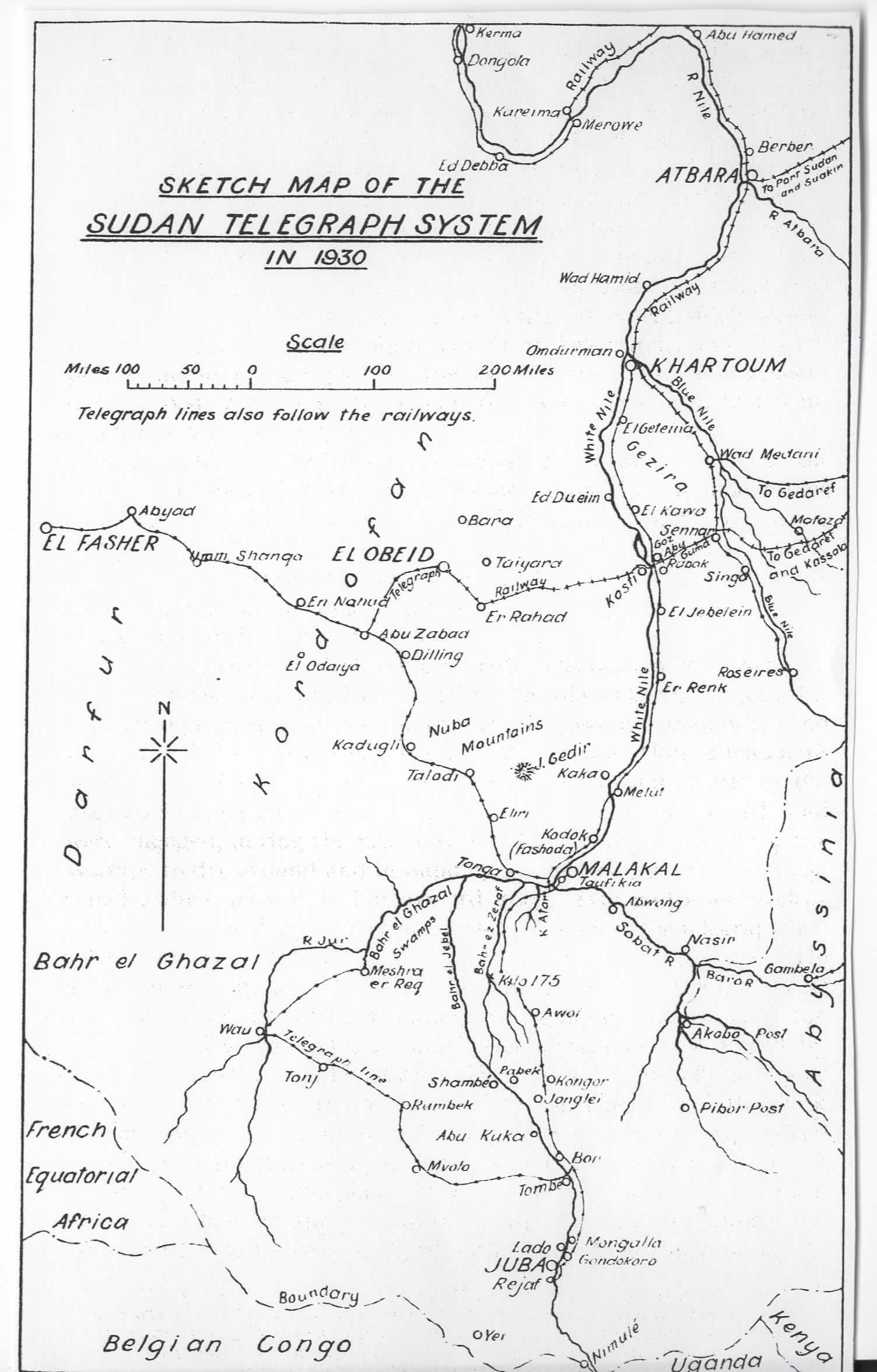 The extension of the Sudan telegraphs

Liddell, in overall command, began by extending the telegraph system from Khartoum southwards along the Blue Nile to Wad Medani and then a further 600 miles to Sennar and then on to Rosaires. Economy was the order of the day; hundreds of miles of old wire from other parts of the Sudan were re-used and the lines were laid along the ground or on low telegraph poles cut from local timber and ferried by river using local craft.

Liddell and his team then worked westwards towards the White Nile from Sennar via Goz Abu Guma, a task completed whilst further military operations against the Khalifa continued. After a brief diversion northwards from Khartoum to lay a line which would meet the approaching railway line heading down the Nile, Liddell and his men carried on from Goz to Er Renk and then to Fashoda and beyond. All along these new lines, manned telegraph offices were opened, staffed by local men. After the final defeat (and death) of the Khalifa at Gedid in November 1899, the telegraph line was pushed westwards from Omdurman across uncharted desert to El Obeid.

This work – hundreds of miles of poles and lines – was completed by the end of 1899. Charlie Perkins, who had qualified in telegraphy in 1895, left the Sudan at the end of November 1899 and shortly afterwards sailed for South Africa. What impresses me about all this is the “can do” attitude which prevailed – the whole idea of laying miles of line in that terrain and climate at such a dangerous time seems incredible. And yet they did it with only a small team of professionals from the Royal Engineers and with local labourers. Although in all likelihood he never fired a shot in anger, I am sure that Charlie Perkins earned his Khedive’s Sudan Medal; I hope he was proud to wear it.