A scratch artillery battery in the Sudan – M/1 at Tamaai

“M” Battery of the 1st Brigade, Royal Artillery, had spent a long but peaceful time in India when it was finally ordered home in 1884. In twelve years’ duty in India, it had seen no active service and had simply followed the usual round of movement between cantonments and garrisons, participation in regular manoeuvres and marches to “show the flag”. By all accounts, the officers and men were glad to be heading home when they boarded the troopship Jumna at Bombay on 6th February 1884 and set sail. However, their hopes for a homeward journey free of incident were to be short lived! 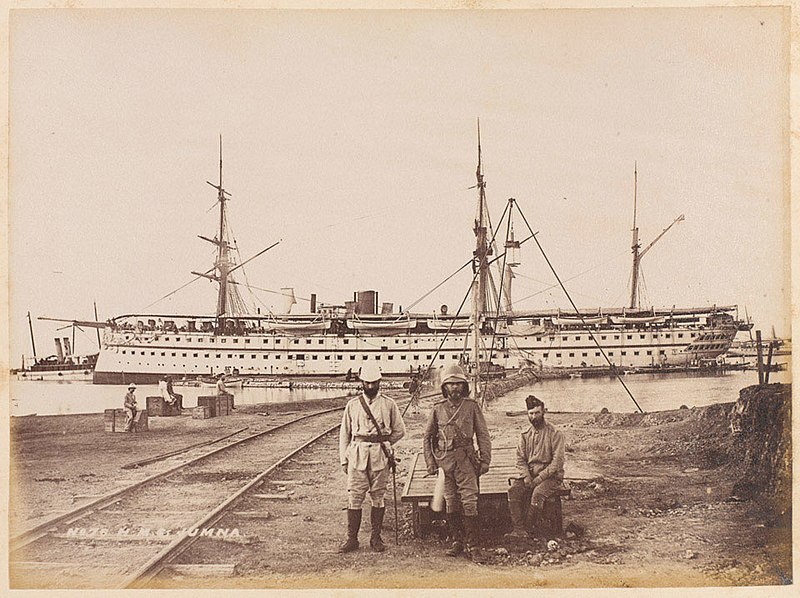 As the Jumna approached the entrance to the Red Sea, she was met by the dispatch vessel Amberwitch, which ordered her into Aden, where she learnt that she was in fact to head for Suakin, the recently-established British naval base on the Red Sea coast, and was to disembark her troops for active service. This largely meant the 2nd Battalion, Royal Irish Fusiliers, 1st York and Lancasters and the 10th Hussars, since M/1 Battery had only part of its personnel on the Jumna – some other men and all its guns, limbers, tack and equipment were on other ships. 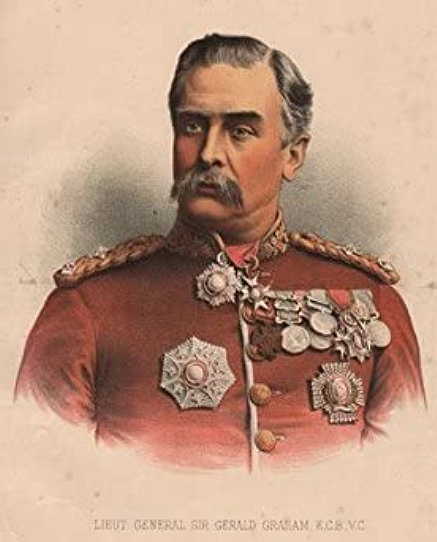 Britain ultimately placed a sizeable force in the eastern Sudan, commanded by Sir Gerald Graham, whose job was to engage or at least to distract local Sudanese (Mahdist) forces under the redoubtable Osman Digna (‘Uthman Diqna) who had already defeated Egyptian forces sent against him. The main fear was that he might intervene elsewhere in the Sudan or cause other tribes to rise; this became all the more important later in the year when Khartoum, defended by General Charles Gordon and its Egyptian garrison, came under siege (from 12th March).

At this stage, in February 1884, Graham had about 4,000 men under command but very little in the way of artillery, his main artillery arm being 6/1 (Scottish Division) R.A. under Major F. T. Lloyd. This had been in Egypt since the 1882 campaign, remaining as part of the Cairo garrison, and comprised 11 Officers, 116 British NCOs and men and 105 Egyptian artillerymen serving as camel drivers etc. For service in the Eastern Sudan, this battery was re-armed (with Egyptian guns) and organised into two camel batteries and in this form took part with the rest of Graham’s force at the battle of El Teb on 29th February 1884. It was the first time that British soldiers and Sudanese tribesmen had actually faced each other – and Graham gained a difficult victory after a hard fight. 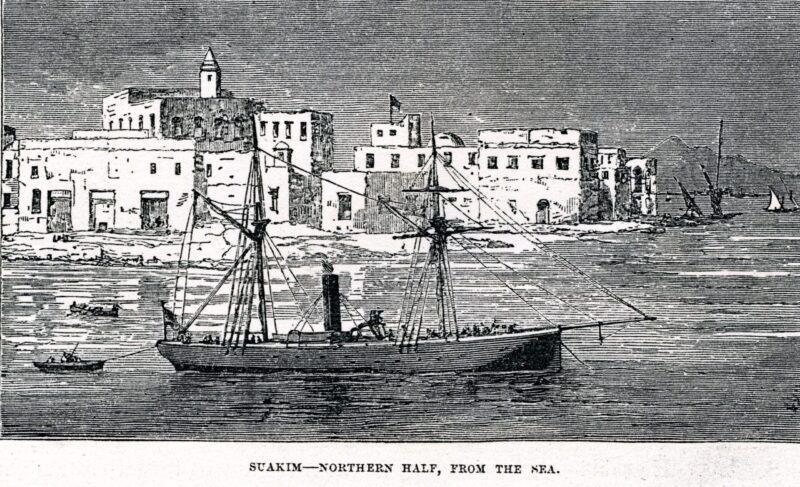 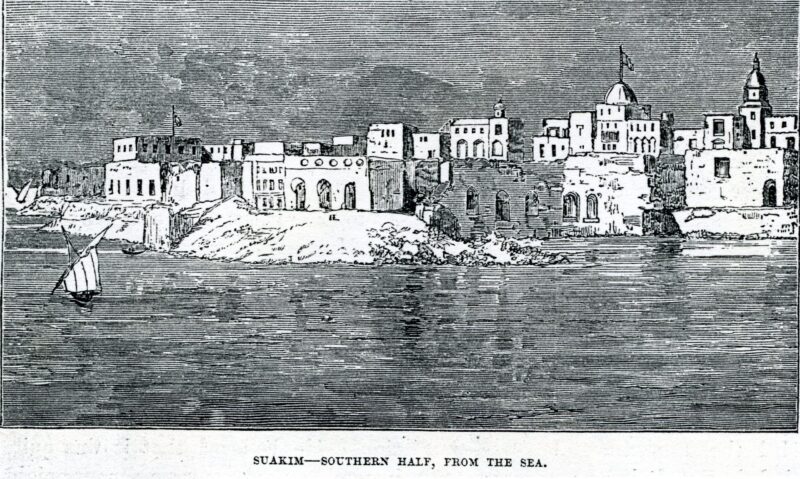 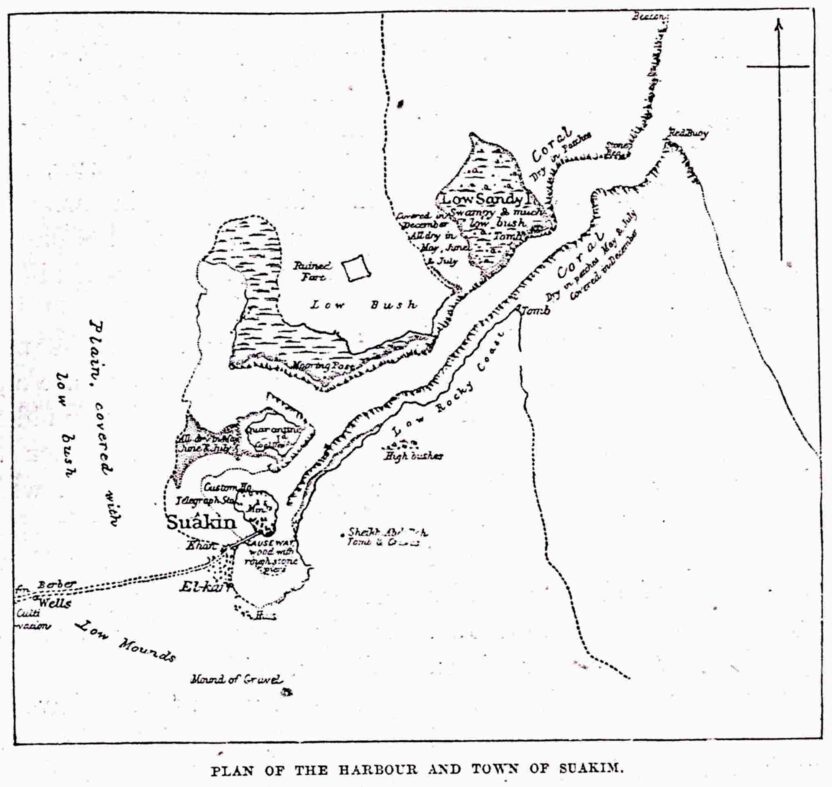 The Jumna had arrived in Suakin early enough for its two infantry battalions and the 10th Hussars to take part in the battle of El Teb, but being “unarmed” M/1 battery could not be put into use at that time. However, the officer commanding M/1, Major Edmund Hunt Holley, discussed with Graham the possibility that the R.A. men he had could establish a new battery there and then, though it would perforce be a rather “scratch” affair. There were 3 officers (E. H. Holley, Henry Welch Ind and Edward Travers Dixon) and  84 men of M/1 available on the Jumna; Holley was able to beg and borrow guns and ammunition from Royal Navy warships moored in the port – four 9-pounder rifled muzzle loaders (RML) – and with harness and tack scrounged from other units at Suakin and with old, abandoned Egyptian carriages and other kit, he managed to put together a workable if somewhat ramshackle field battery. Naval carpenters helped to put the carriages into some sort of working order, with “some parts missing”. The 9-pdr borrowed naval guns were described as “an odd lot” – two of six hundredweight and two of eight pulled by 52 mules “borrowed” (like the three officers’ horses) from the Transport Corps and carrying 86 rounds per gun. Holley was later to  be specially “mentioned” by Major Lloyd, comanding the artillery :

“Major Lloyd specially mentions Major Holley for the ability and energy with which he equipped this 9-pr. battery, entirely from naval sources, for the field, under exceptionally difficult circumstances. These guns were of great service, and Major Holley has proved himself an excellent Artillery Officer in the field”  (L.G. May 6th, 1884)

… And in Graham’s dispatch for the “ability and energy … under exceptionally difficult circumstances” which he showed in raising the battery. He was promoted to Brevet Lt. Colonel for his services in the Sudan and ended his career as Major General and Colonel Commandant of the Royal Artillery.

Since Osman Digna had clearly not been cowed by the clash at El Teb and, with an estimated 12,000 armed follwers, still posed a very real threat, not least to the security of the port, Graham marched out again to face him on 11th March and a second battle was fought at Tamaai (Tamai) on 13th March 1884.

Graham organised his force into two Brigades and these into two fighting squares, marching in echelon and setting off from their camp at 8.30 a.m. Of Graham’s small artillery contigent, 6/1 served in 1st Brigade square (under General Redvers Buller) and M/1 in the second (under Major General Davis) – though the 2nd Brigade was actually in advance – and it was upon this second square that the first Mahdist rush was concentrated. Their sudden appearance from a nearby ravine (the Khor Ghob) momentarily threw the square into some confusion but M/1, which had already been ordered outside the square, came into action on the right rear, firing shrapnel and changing to case as the range shortened. The battery was more or less isolated and unsupported but its fire effectively prevented the enemy from working round to the rear of the square and gave a breathing space for the 2nd Brigade square to be re-formed. Shortly afterwards, the first brigade square faced its own attack and 6/1 was soon in action at close range.

The battle in progress – 2nd Brigade in action to the left; 1st Brigade marching in on the right.

“… the battery of four guns under Major Holley, R.A., had been ordered outside the square on the right flank and when the disordered retirement took place in the 2nd Brigade, this battery was for a time unprotected by infantry and exposed to the assault of the enemy, now coming in crowds. Yet officers and men stood firmly to their guns, raking the advancing enemy with case, which told with deadly effect.” 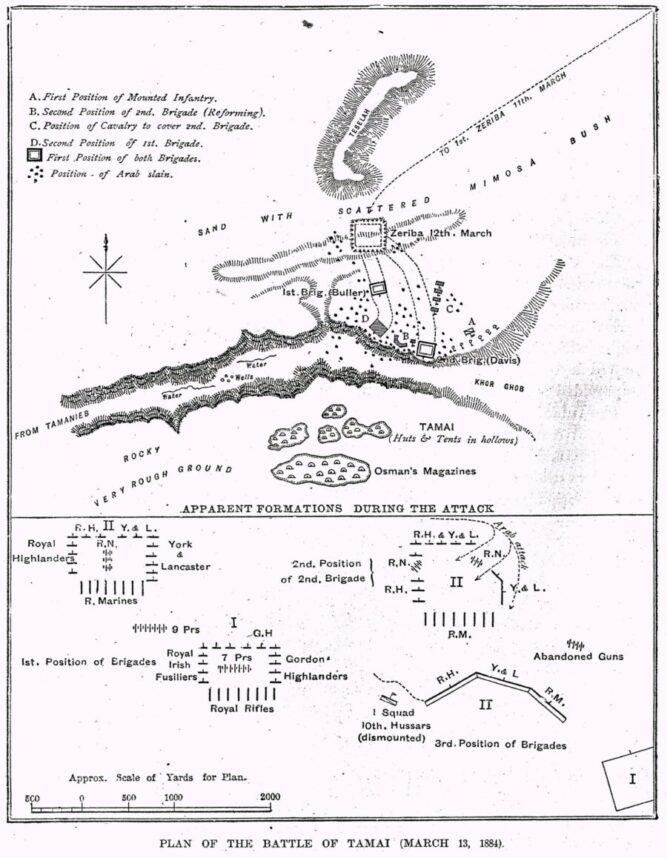 The guns of 6/1, moved to command the ravine in which most of the Mahdist forces were concentrated, were joined by those of M/1 which moved from left rear to right rear as the firing progressed. By 10.00 a.m., the Sudanese had had enough and disengaged, streaming off into the desert. During the action, 6/1 fired 132 shells of mixed type (shrapnel, common shell and case) and M/1 fired 182 similarly mixed rounds.

In the 2nd Brigade square at Tamaai 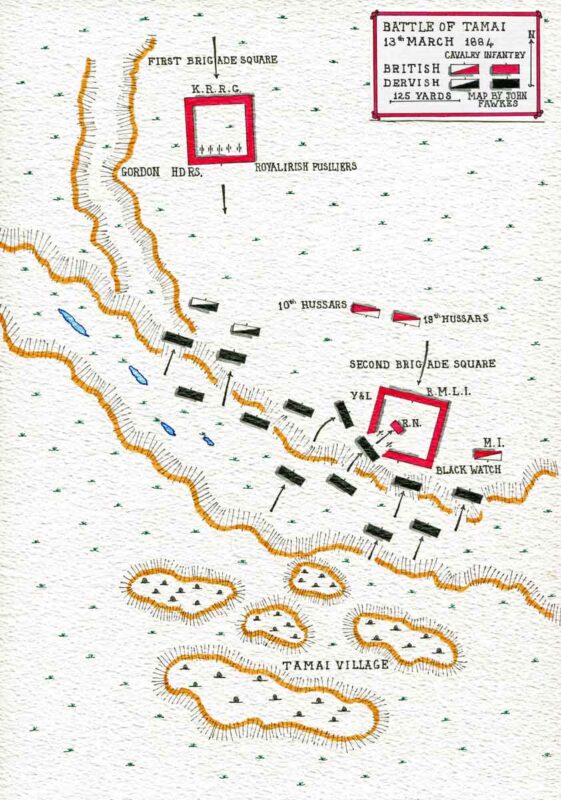 As desultory operations continued, M/1 saw its final action on 27th March 1884 when Graham led a column (again fighting in two squares) from Suakin against what was deemed to be Osman Digna’s main camp at Tamanieb but after facing only slight opposition, in which M/1 fired a few rounds, was back in Suakin on 29th.

With Gladstone’s Liberal government getting cold feet about the expense of operations in the distant and remote Eastern Sudan, instructions from London ordered Sir Gerald to cease operations at the end of March and disperse his force. M/1 was back aboard the Jumna with their former fellow-passengers the 2nd Royal Irish, 10th Hussars and 1st York and Lancasters. The Jumna then resumed its voyage after what had been an “interesting” six-week diversion for its complement and headed for England, arriving in Portsmouth on 21st April to be welcomed with “Home, Sweet Home” from the band of the St. Vincent. The battery proceeded at once to Woolwich.

It is interesting that at Tamaai, both R.A. batteries were “improvised” – 6/1 as two camel-drawn batteries with new guns and M/1 as a scratch formation made up from bits and pieces as available on the spot and manned by RA personnel who happened to be passing through!

The medal roll in WO.100.63 shows just 87 medals to the battery, of which as many 18 men did not receive the “Tamaai” clasp for some reason – perhaps ill or on duty elsewhere. That leaves only 69 medals with clasp “Tamaai” awarded to “M” Battery; very few seem to have appeared in recent auctions – perhaps half a dozen identified – so that medals to M/1 appear to be scarce on the market and are worth looking out for! 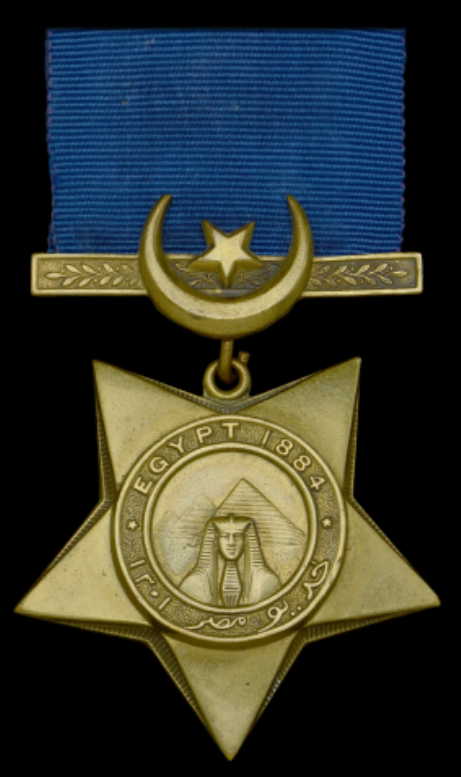