Home/Medals Articles/Battleships for the Japanese – and a medal from the Emperor.

Battleships for the Japanese – and a medal from the Emperor. 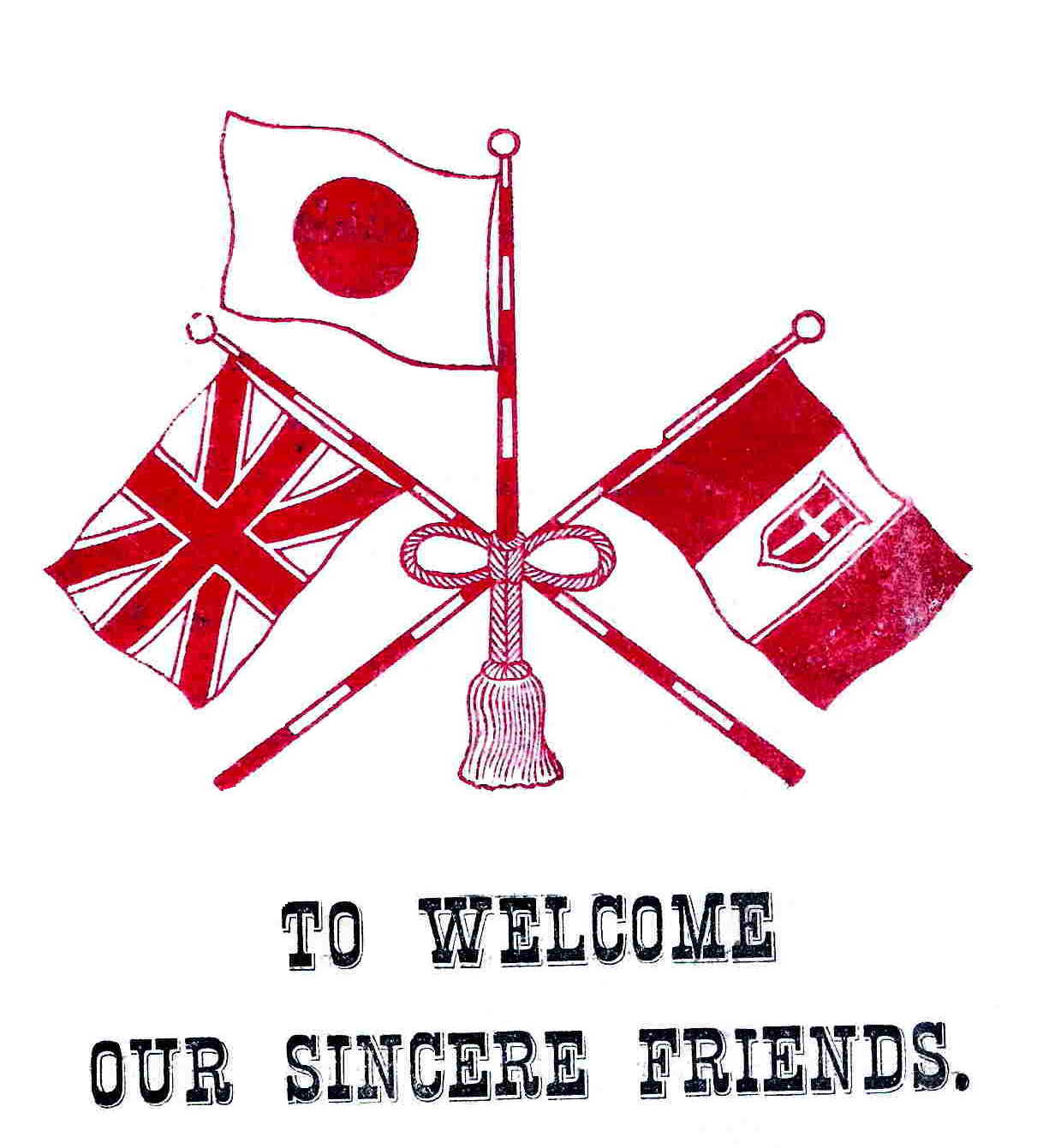 Born in 1865, Hugh Haweis Paynter entered the Royal Navy in 1879 but didn’t have an exciting career from a medal collector’s point of view; if we count what he was awarded simply for RN campaign service, it wouldn’t amount to much. As a young Midshipman, he was on HMS Northumberland off Egypt in 1882 and in 1885-86 served in the Eastern Sudan. By the time of his early retirement from the Navy as a lowly Sub-Lieutenant in 1888 he had just the 1882 Egypt medal with clasp Suakin 1885 and the 1882 Khedive’s Star. He spent most of the rest of his career as an engineer with various firms and with the major armament producers Messrs Armstrong-Whitworth and Vickers and toured the world working for them – presumably securing orders and generally

advancing their interests. In 1903, on behalf of Messrs. Armstrong, he delivered to the Sultan of Turkey at Constantinople a new “royal yacht”, the Seughudlu, for which he received the 3rd Class of the Order of Medjidieh. 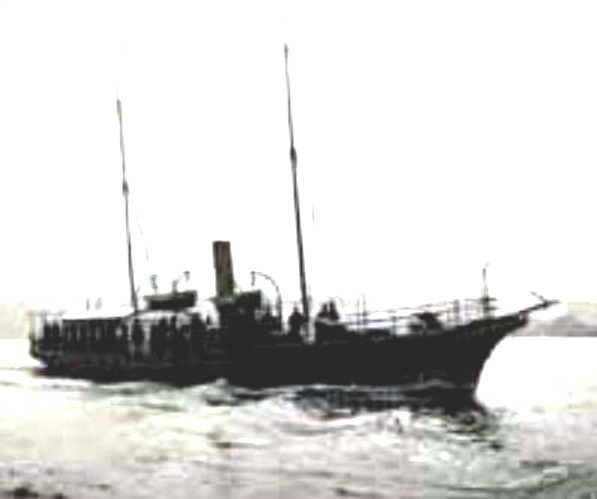 But shortly afterwards his career took an unusual turn and drew Paynter into the dangerous world of international power politics. Japan, very recently a “closed” society and famously opened to Western influence only after the 1850s, became eager under its new Meiji emperor to embrace all things Western and “modern”, not least to develop its armed forces on the most technologically advanced lines to support Japan’s growing imperial ambitions. The Japanese army was remodelled along French and German lines and its navy looked to Britain for help and inspiration. To Britain, the rise of a powerful Japanese navy as an ally was an attractive proposition – it would, for one thing, counter Russian naval influence in the Pacific and ease the naval and financial burden which Britain was beginning to feel in attempting to command the Far Eastern seas. A Japanese naval ally would allow Britain to draw back somewhat from the distant and expensive commitment to the Pacific and allow her to concentrate her naval forces on what appeared to be a growing (and closer) German threat. One result of this was the conclusion of the important Anglo-Japanese Treaty in January 1902, which, despite some strains in the relationship, especially over Japanese attitudes to India and China and British attitudes to Japanese influence in Korea, was reconfirmed in 1905 and 1911.

One important result for Japan was that the treaty promised British neutrality if Japan went to war with another power – and for Japan at that date, that really meant Russia –  and it guaranteed no interference from the Royal Navy.

Over the period 1902-4, Japan and Russia moved closer into war as both had rival interests in China, Korea and the Pacific and by the end of 1903 it was clear that the much-admired “little Japan” was ready to take on the might of the great Russian Empire – a thing which would have seemed ridiculous not very long before. The Japanese looked to enlarge their already powerful battle fleet (much of it built on the Clyde and in other British yards) and sought last-minute additions to their strength. Two brand new war- 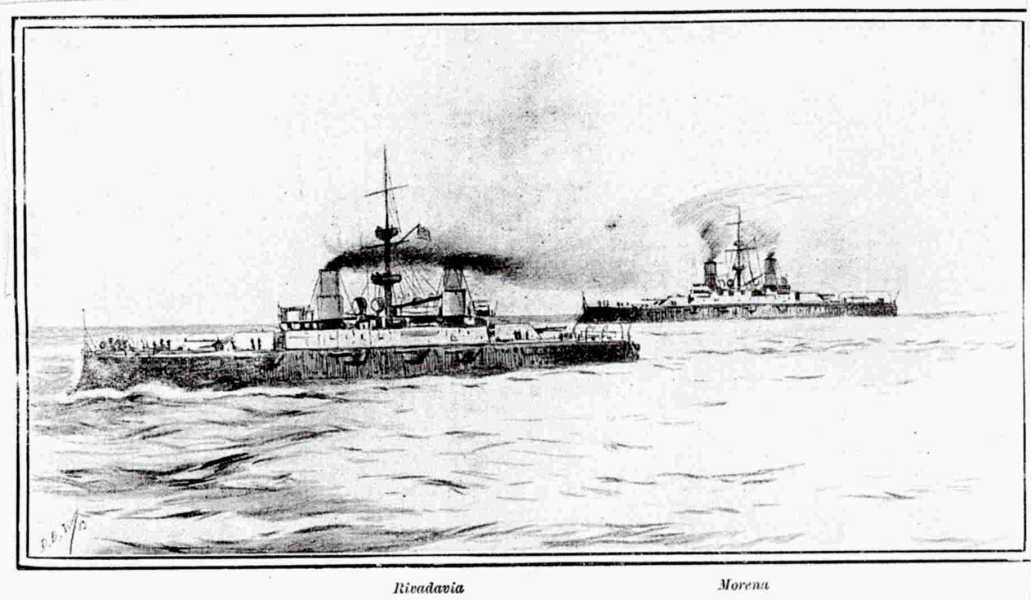 As designed for Argentina …

ships in Genoa attracted their attention. Here, the Genoese ship builder Ansaldo was constructing two battleships, the Morena and the Rivadavia, ordered by the Argentine government in 1902. They were armoured cruisers of the Giuseppe Garibaldi class, designed as a cross between a battleship and a cruiser, but with a smaller displacement, the strength to fight in the line of battle and with enough speed to avoid action with larger ships. However, after fairly closely-guarded negotiations, the ships were purchased by the Japanese government when near complete and were renamed the Nisshin (or Nissin) and the Kasuga.

As Russo-Japanese relations moved towards war, the Japanese urgently needed experienced officers to get these ships quickly from Italy to join the Japanese fleet and appointed Messrs. Armstrong to find the men. In January 1904, three British ex-naval officers were selected, one of whom was Hugh Paynter, who was to command Kasuga, the others being retired Lieut. J. F. Lea (appointed to command Nisshin) and former Captain Edward Boyle, who was to represent Messrs. Armstrong and would travel on Nisshin. All had been on the Emergency List of the RN, but of course were not supposed to engage in diplomatically sensitive employment like this – and it was very sensitive, given the probable Russian reaction. Paynter received a fairly curt letter from the Admiralty informing him that his name had been removed from the Navy List and his Commission cancelled, as were those of Lea and Boyle. 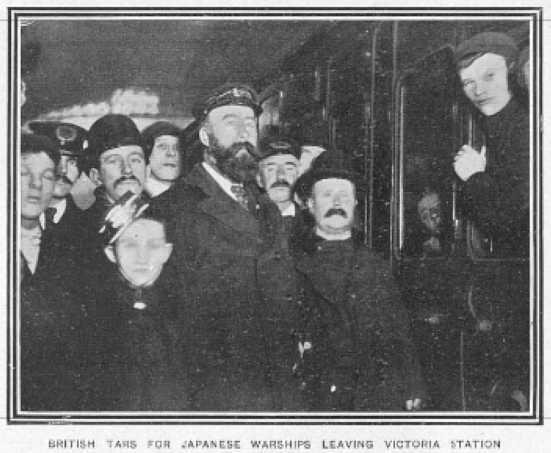 He nevertheless went ahead and worked on his first task – raising in the nine days available some 120 men (“at £6 per month or double if war breaks out, and a free passage home”) from the out-of-work sailors of the East End of London. It was quickly done “and there was no mistaking the trend of British sympathy”, but Paynter then had to take them all by train to Genoa to join the ships, which would be partly crewed by Italian engine-room staff and carry some Japanese officers, including Admiral Miri who was technically in command of both ships.

It is difficult to overstress how embarrassing or even dangerous this could have been to the British government, however pro-Japanese it actually was, and just how much interest it aroused around the world. There was no doubt about why the Japanese wanted these powerful new warships and no doubt about their future use and it was strongly believed in many quarters that the Russians would launch a pre-emptive attack on them during their long voyage across the Mediterranean and into the Indian Ocean and beyond. They probably would not be capable of defence (given their scratch crews) but could nevertheless be consigned to the bottom of the sea. And if that happened, what would the British government do if British officers and personnel were killed? 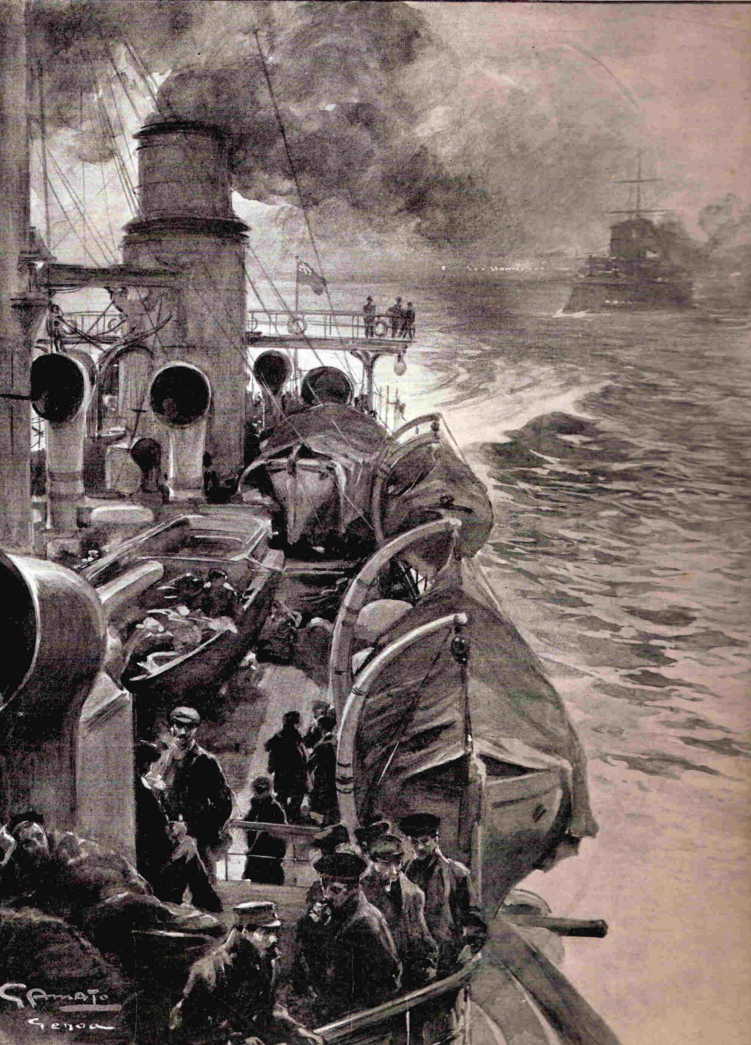 The incident caught the attention of the press around the world – and infuriated the Russians – and was excitedly watched and reported move by move. During the voyage, the Imperial Russian Navy did indeed deploy ten ships to shadow the two vessels, especially in the Mediterranean, with the undoubted intention of sinking them as soon as the imminent conflict started, but the Royal Navy’s cruiser King Alfred also shadowed the Japanese ships into the Indian Ocean once they had passed Port Said and the Russians, in the end, took no action. They were later, of course, to cause a major diplomatic incident with Britain when their Baltic Fleet fired on British fishing vessels on Dogger Bank, mistaking them (for some reason!) for Japanese warships.

The two 8,000 ton vessels sailed from Genoa on 9th January 1904 and after a long, nervous voyage, sailed at top speed between various coaling stops, Nisshin and Kasuga arrived safely in Yokosuka dockyard on 16th February, “their advent the signal for universal rejoicing”. War had formally broken out on the 4th, while the ships were coaling in Singapore. 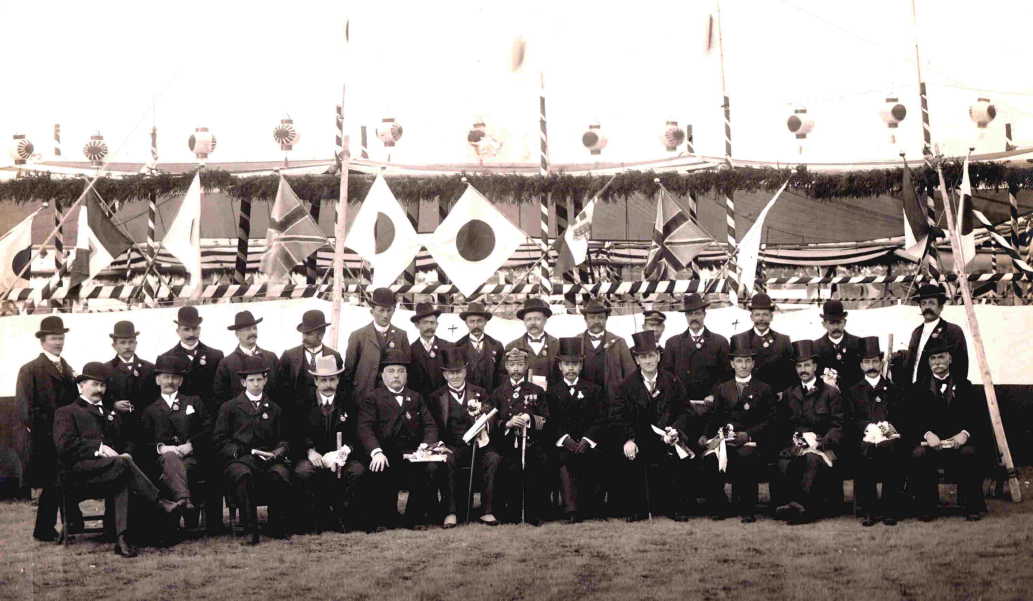 To their immense surprise, their crews were accorded a hero’s reception at Yokosuka and were taken by special train to Yokohama to further celebrations and finally on to Tokyo where they were treated to a full-scale garden fete in their honour in the city’s Habiya Park and to dinners, public addresses, speeches, local tours – and continued attention from the world’s press. 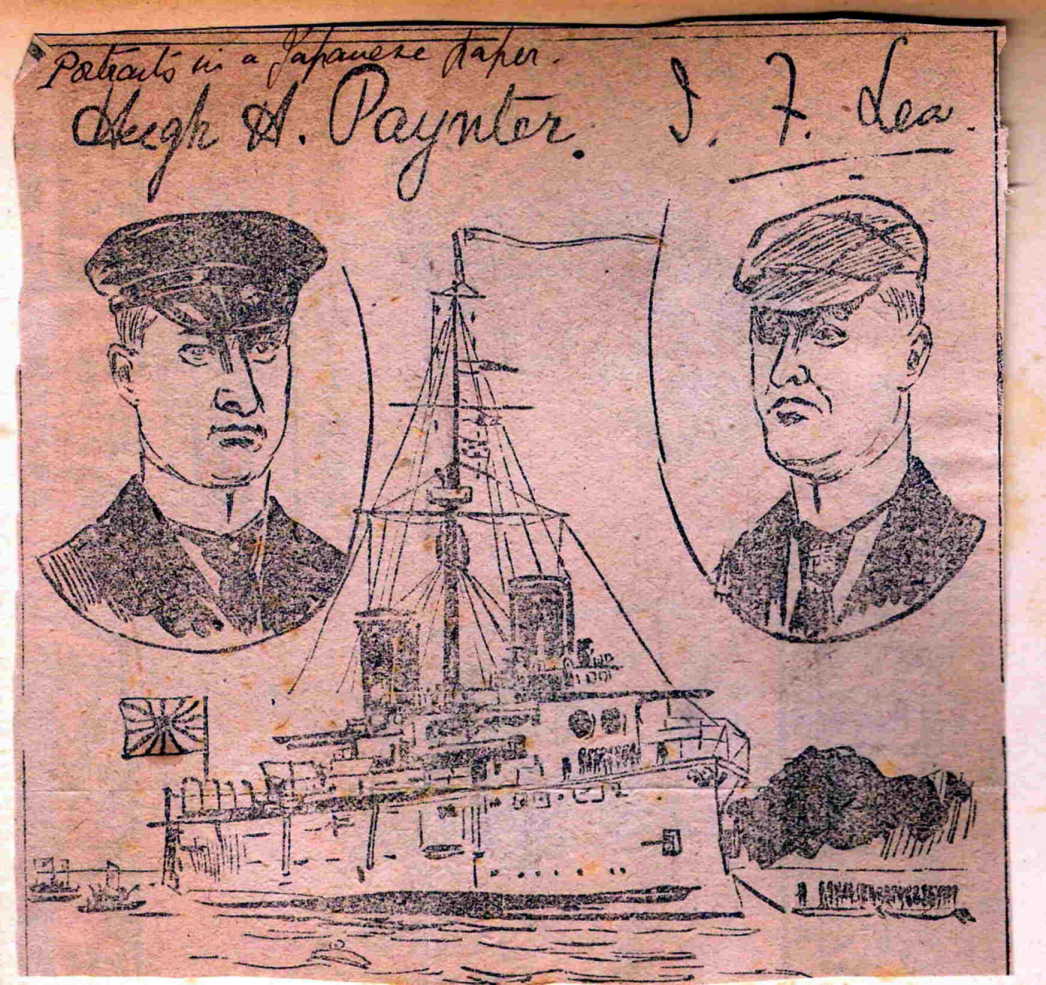 A Japanese newspaper’s view of their guests…

Undoubtedly the highlight of the trip for the three British officers – Paynter, Boyle and Lea – was the very rare honour on 23rd February of a personal interview with the Emperor himself, who conferred on all of them the Order of the Rising Sun, 4th Class, and gave them beautiful personal gifts.

The officers later returned to the UK via San Francisco, across the US and thence to Liverpool. Wherever they went, all three were besieged by international reporters wanting their story. 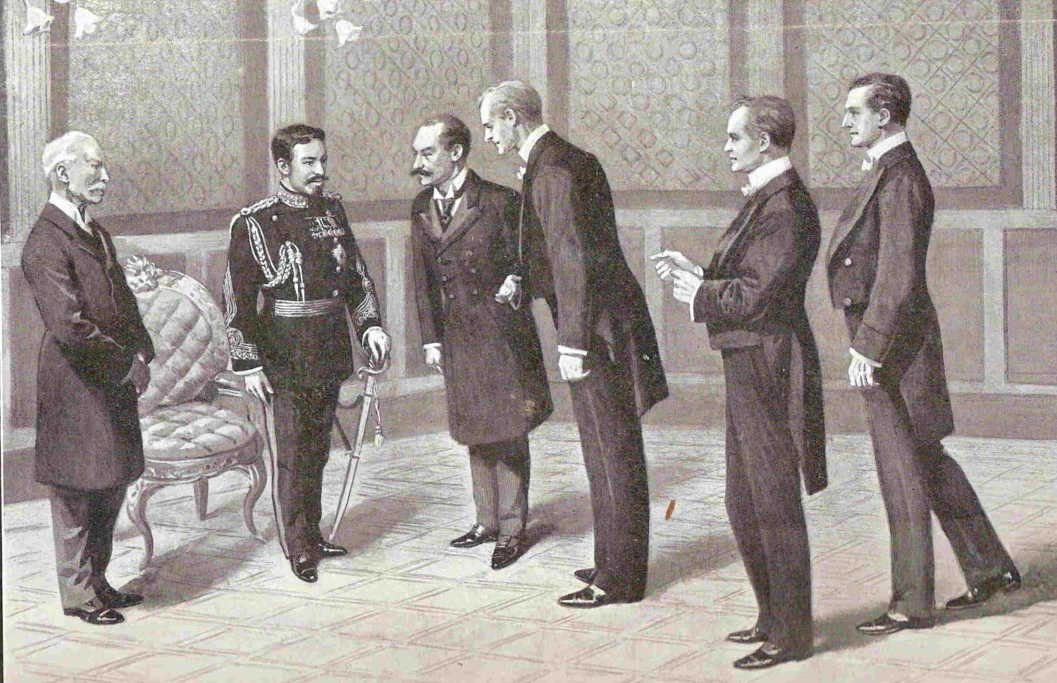 The honour of an audience with the Emperor. Paynter third from right.

In Japan, both warships were immediately completed and crewed and rushed to join the battle fleet; they were later involved in the siege of Port Arthur and in the decisive action in the Straits of Tsushima on May 14th 1905 which destroyed the Russian Baltic fleet after it had journeyed around the world to engage the Japanese. 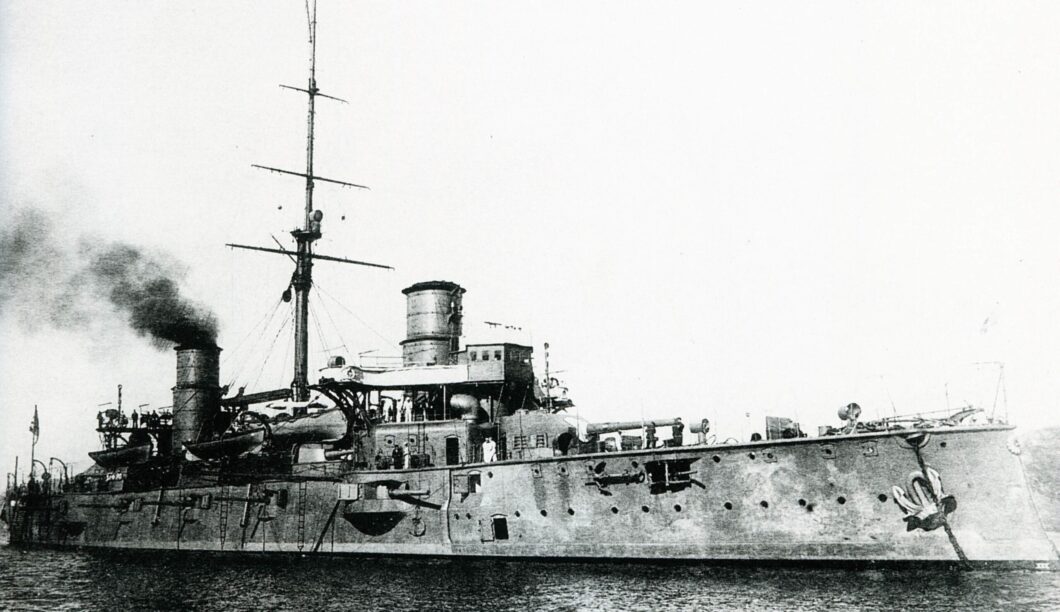 During the 1914-18 war, Paynter had his commission restored and served for some time aboard HMS Satellite, a depot ship based at Newcastle-upon-Tyne, no doubt linked to his service with the Armstrong factories. He was later given permission to “proceed abroad” on business of Messrs. Armstrong Whitworth – though not to wear uniform – and travelled to the US, France, Brazil and Italy. He ended the war in the rank of Lieut. Commander and resumed his civilian job with Armstrong’s.

Hugh Paynter died in March 1934, aged 68; he and his wife – and earlier members of the family – are commemorated by plaques on the north wall of Bath Abbey, though he was actually cremated in Bristol. 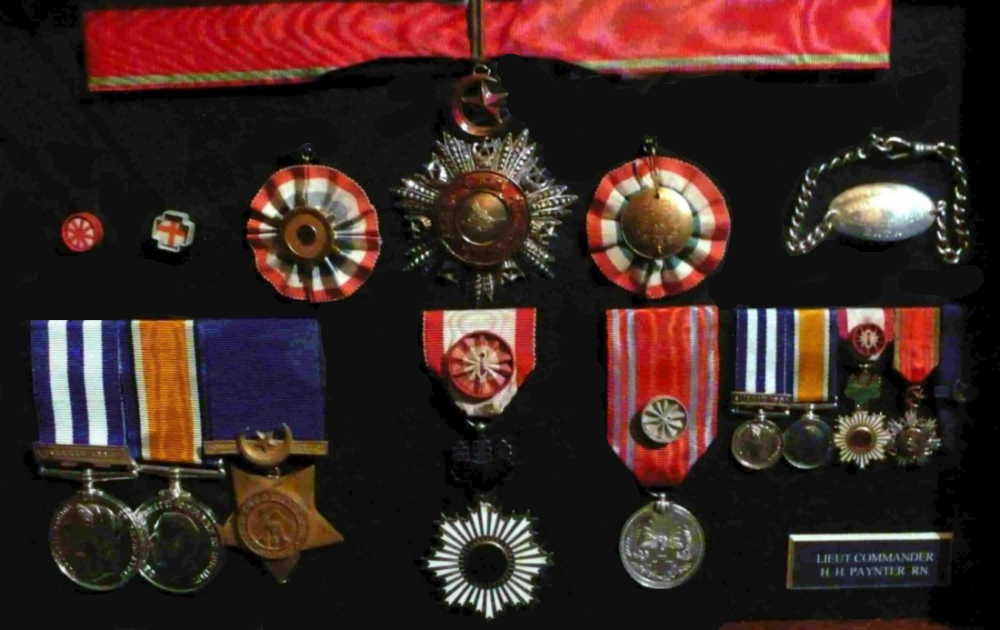 In the end, Paynter’s medal group was rather more impressive than his original “Egypt pair” – adding the Medjidieh and the Rising Sun, as well as the single British War Medal he received for 1914-18 service. These awards – and a very fine collection of documents and photographs – remain to remind us of the rather special “extra curricular activity” of a British naval officer.