The Africa General Service Medal was instituted in 1902 to reward service in campaigns of conquest or punitive expeditions in Africa. Some of these “small wars” were not so small – the commonest (and most recent) clasp on the medal, Kenya, for the Emergency of 1952-56 caused by the Mau-Mau insurrection, was awarded in considerable numbers to a whole range of units, British, local, police and civilian. But earlier clasps to the AGS are much rarer – East Africa 1902, for example, was awarded to only approx. 78 recipients.

The most accessible and easiest available of the early clasps to the AGS are some of those awarded for operations in Somaliland in the early years of the twentieth century. Many of these were earned by local forces, by the King’s African Rifles or by Indian contingents, with comparatively small numbers of Europeans deployed in the region. No fewer than six clasps to the AGS were awarded for service in Somaliland over a period of twenty years against the determined resistance of a man the British chose to call “The Mad Mullah” – in the usual way of denigrating your enemy. “The Mad Mullah” – Mullah Mohammed bin Abdullah – claimed to be the Mahdi or Islamic “expected one” and first proclaimed jihad against the British in 1899. He was one of those “native” leaders whose opposition to colonial rule ranks him amongst the most determined opponents of European expansion – men like Osman Digna in the Eastern Sudan, the Fakir of Ipi on the North West Frontier or Abd el Krim in North Africa. These were men who simply would not accept the imposition of Christian, western rule and spent their lives proving it; they are understandably regarded as nationalist heroes in their own states today. 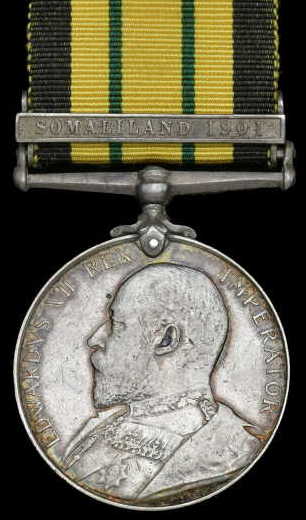 “Somaliland 1901” – the first and rarest of the Somaliland clasps 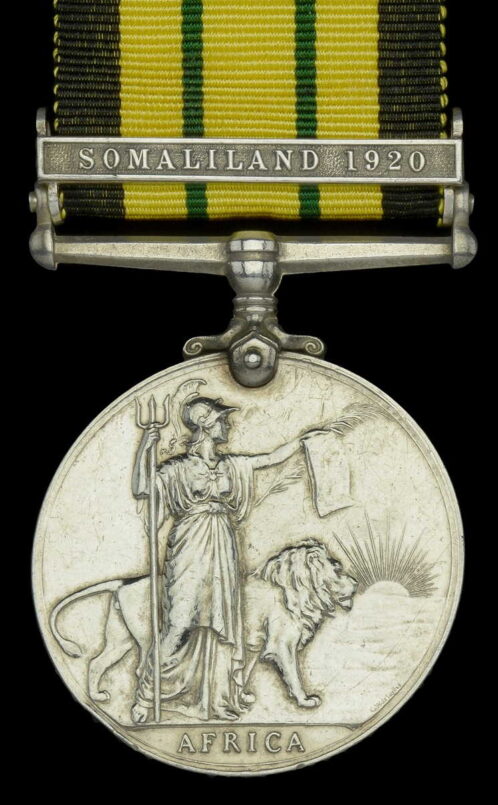 The AGS clasps awarded for service in Somaliland were :

Somaliland 1901 : Awarded per Army Order 133 of 1902. A rare clasp,seldom seen to local or Indian recipients, let alone to European officers or NCOs. For operations centred on Burao 22nd May – 31st July.

Shimber Berris 1914-1915 : Awarded per Army Order 90 of 1916. A rare clasp, awarded largely to the King’s African Rifles and Indian soldiers for the attack on and destruction of the Mullah’s forts at Shimber Berris in 1914 and 1915.

Somaliland 1920 : Awarded per Army Order 133 of 171 of 1921. A rare clasp and the only Somaliland clasp found to the RAF. For operations between 21st Jan. – 12th Feb.1920. Naval forces also received the clasp, including the aircraft carrier Ark Royal. 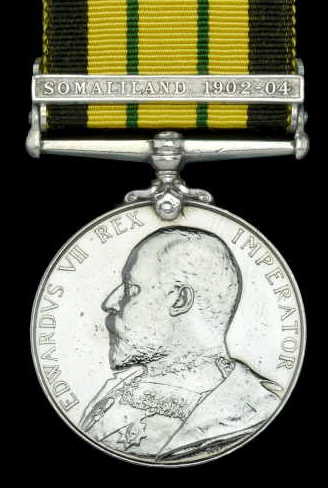 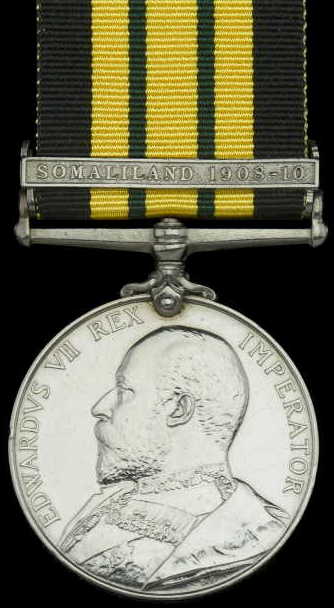 These expeditions, effectively brought about by one man’s determined resistance, were only ended with the death of the Mullah from disease just after the last campaign.

It will be noted that only one large-scale encounter was selected for special commemoration with its own clasp, the battle of Jidballi fought on January 10th 1904. The clasp, always seen in conjunction with that for Somaliland 1902-04, was awarded to significant numbers of British troops – most notably of the 1st Hampshires and 4th K.R.R.C., as well as to smaller contingents from other British regiments and large numbers of Indians and soldiers and the K.A.R. The battle lasted less than two hours and caused the British column casualties amounting to 19 killed and 36 wounded for an enemy loss estimated at over 1,000, of whom 666 were counted on the battlefield. 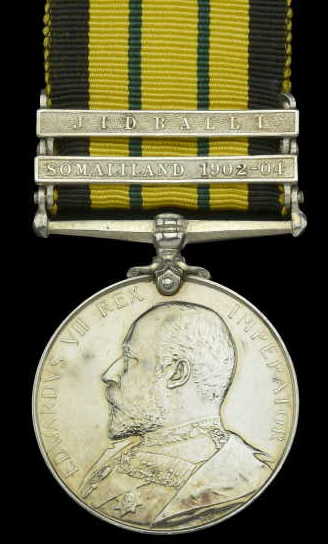 Nevertheless, because only one engagement was selected for commemoration with its own clasp, it should not be supposed that the other expeditions into the Somaliland interior were dull affairs – regardless of the appalling heat, dust and terrain. Medal collectors may consider that wide-ranging dates on a medal – like 1902-04, or 1908-10 indicate that there was no particular action or the lack of any significant incident worthy of being recalled. But in fact there were several sizeable encounters apart from that at Jidballi during the various periods of British operations in Somaliland. One of these – now completely forgotten – was fought at Gumburru, deep in the Ogaden Desert, on 19th April 1903 and was the sort of encounter which makes for interesting reflection on the nature of the campaign and the real strength of an enemy who knew the country and could “hit and run” with a degree of impunity.

On March 6th 1903 (during the 1902-04 period of operations), a column under Lt. Col. Fasken set off from Obbia to seek out tribal forces supposedly concentrating near the village of Galadi. It was confidently expected that the enemy would be met, engaged and defeated but it did not happen: no enemy forces were located and the force returned to base. However, the contingent of 2nd (later 52nd) Sikhs with the column was sent to the village of Galkayu as a garrison on what was one of the “lines of communication” between the oases in the region.

On April 8th 1903 a party of these 2nd Sikhs, under Captain Herbert C. Vesey, comprising two Indian Officers (Subadar Naraing Singh and Jemadar Mohammed) with 47 Other Ranks, set off from Galkayu as escort to a convoy carrying stores to the vicinity of Gumburru. Here, a small column under Captain A.S.Cobbe VC had been patrolling the area and had constructed a thorn-bush enclosure or zariba as a base. The convoy reached the zariba without incident on April 16th. Next day, a patrol of the King’s African Rifles sent in a runner to report that they had encountered a very large force of enemy tribesmen only a few miles away and that they were falling back to the zariba. On receipt of this news, Colonel A.W.V. Plunkett, commanding the K.A.R. with Cobbe’s column, set off with a company of his regiment to cover their return; by special request, he took with him Captain Vesey and all 49 men of the 2nd Sikhs. They set off at 9.00 a.m. on April 17th and none of the Sikhs was seen alive again.

At about 11.45 a.m., heavy firing was heard at the zariba from the direction of Col. Plunkett’s advance. Later that afternoon, 38 men of the K.A.R., most of them badly wounded, straggled back to the camp with the news that the rest of the column had been annihilated. With the exception of one wounded man recovered later, these were the sole survivors. 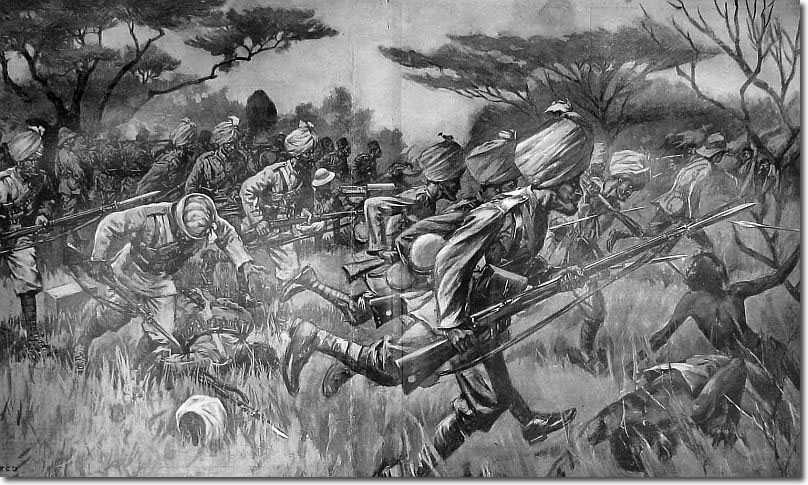 What had happened to Plunkett’s column was only pieced together by adding the accounts of the few survivors to those of Somali tribesmen captured later on – and by a visit to the battlefield. It seems that Plunkett’s column had met up with the patrol of K.A.R. it had gone out to assist only a mile and a half from the zariba. Plunkett clearly decided to take the fight to the enemy, rather than withdraw to base, and formed his small column of approx. 224 men into a three-sided “square”. The 2nd Sikhs formed the front face as the “square” advanced in search of an enemy. Three miles from the zariba, near Gumburru Hill, in an open area surrounded by very dense thorn scrub, Plunkett’s column was suddenly attacked by a force of 8,000 Somali tribesmen, estimated at 2,000 riflemen and 6,000 spearmen, many of them on horseback. Repelling the first attack by horsemen with volley fire, Plunkett appears to have advanced his “square” directly towards the mass of the enemy, heading for the middle of the open plain; some of the survivors of the K.A.R. claimed to owe their lives to the fact that they were left wounded “on the ground” while the fight moved away from them.

Those who died at Gumburru received the clasp “Somaliland 1902-04”

The first attack was followed by several others – with riflemen and with horsemen and spearmen who closed with the column. All the attacks were beaten off until the ammunition gave out. Each man of the K.A.R. carried 150 rounds and the Sikhs 100 rounds of ammunition on his person, but there was no reserve. Captain Vesey was supposed to have been killed early in the action and Col. Plunkett was said to have ordered a bayonet charge as a last resort in an effort to fight their way through the enemy and back to camp. He was shot in the head and killed in the attempt. The whole action seems to have been over just after noon, when the final Somali attack destroyed what was left of the “square” and killed just about everyone in it.

Those who escaped testified to the terrible casualties suffered by the Somali attackers – perhaps 1,000 men – which may have accounted for their failure to follow up the victory and attack Cobbe’s main zariba. The total loss at Gumburru was no fewer than nine British officers killed (including Vesey and Plunkett), both Indian Officers (Naraing Singh and Mohammed) and 176 Other Ranks killed, including all the 2nd Sikhs; of the 39 K.A.R. who survived, 28 were wounded.

A British officer visiting the battlefield soon after the engagement reported that the 2nd Sikhs lay dead in an unbroken line and that their face of the square was unbroken. Indeed, the staunch behaviour of the Sikh contingent at Gumburru was universally praised; in May 1903, Lord Kitchener, C-in-C in India, commended them in a public lecture and General Manning, commanding forces in Somaliland, spoke of the universal admiration for their bravery and dedication.

Needless to say, after Gumburru the hornet’s nest was well and truly stirred up and the British made immediate efforts to extricate Cobbe’s small force before it too was overwhelmed and before other columns set out in search of retribution. This may be said to have been achieved at Jidballi in January 1904 and to have closed what was just one more phase of the Somaliland “problem”.