The East and West Africa Medal :

the conquest of a tropical empire. 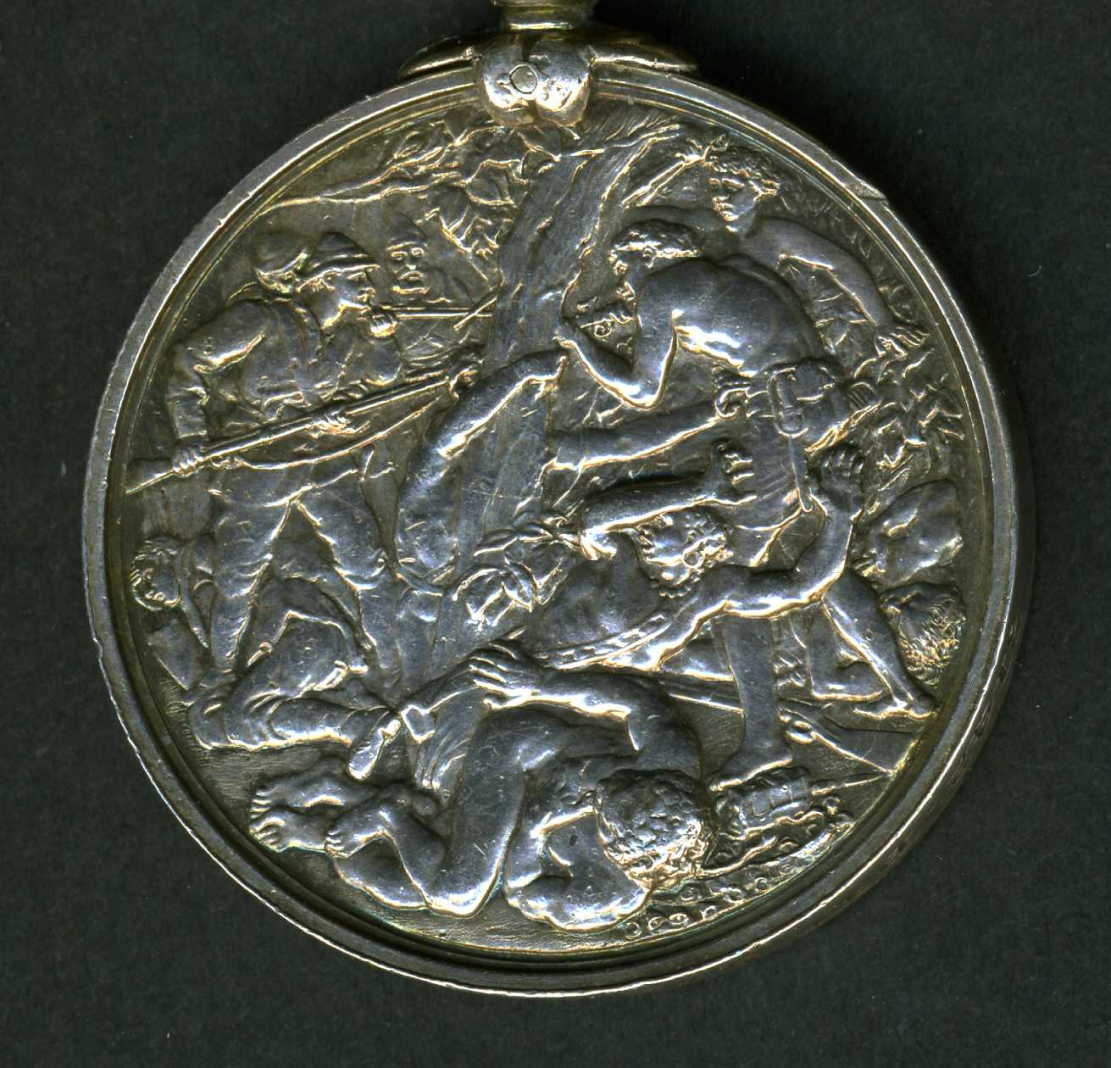 Between about 1887 and 1905, Britain became a leading player in what became known as “the Scramble for Africa” – the process of outright land-grabbing in tropical Africa, largely played out between Britain and France but involving on a smaller scale Germany and Italy. The result was the creation of the vast “new” African empires of Britain and France.

It is interesting to note that as recently as 1865 a Parliamentary Select Committee recommended that Britain simply abandon all of its West African territories (small as they were) on the grounds that they had no economic worth but cost money to administer. Only thirty years later, this attitude had changed completely and under the former Liberal turned ardent Tory imperialist, Joseph Chamberlain, as Colonial Secretary from 1895, Britain began a deliberate policy of annexation and expansion from its coastal enclaves. British territories in West Africa – the Gambia, the Gold Coast, Sierra Leone and the Niger Delta territories – were massively expanded by the seizure of territory inland in a bid to halt the equally aggressive French land grabs which, it was feared, would surround and cut off British territories and deprive them of a hinterland. Although there seemed to be no immediate value to the newly-acquired lands, the Salisbury governments worked on the “undeveloped estates” theory – that lands may offer significant resources and/or trade markets in the future and that it was better to take the lands now rather than lose them to the French forever. 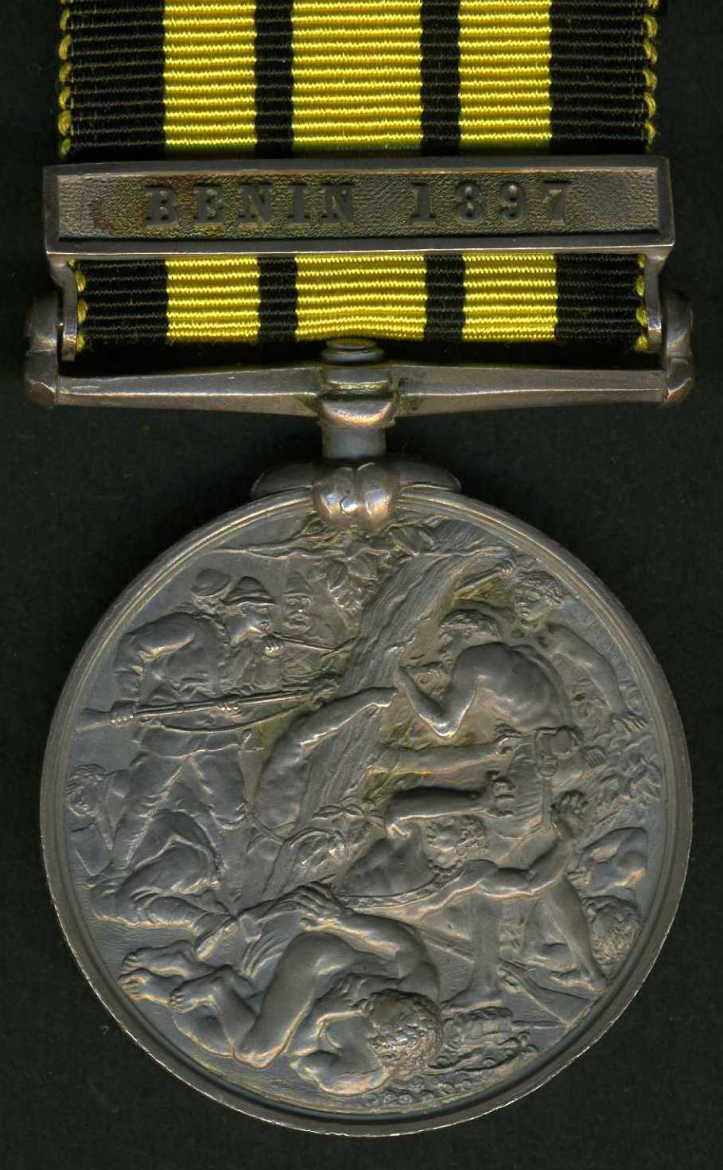 The result was a series of British military campaigns on the west and east coasts of Africa. They fall broadly into two types – campaigns of actual conquest, where British forces (largely African troops under British officers and NCOs) entered a particular territory (like the northern emirates of what is now Nigeria) and destroyed their forces in battle and annexed the area. Or there were “punitive expeditions” launched to retaliate against or suppress local uprisings in territories already seized (as in the Sierra Leone hinterland in 1898-99). Some campaigns also involved naval participation (naval brigades landed for shore service) or – in East Africa – the deployment of Indian troops.

To reward the personnel who took part in the expeditions between 1887 and 1900 (when a new Africa General Service Medal was introduced), the East and West Africa Medal was instituted. 21 separate clasp were eventually authorised, many of them simply bearing the year or years of the operation or operations in which the recipient served. Some recipients took part in a number of expeditions but had only one dated clasp to show for it. An unusual award was that for the East African coastal campaign at M’wele in 1895-96, where the medal itself was awarded not with a clasp but simply with M’wele 1895 or M’wele 1895-96 engraved on the rim. Why this campaign should have been treated like this – rather than with a distinctive clasp like all the others – is not known. 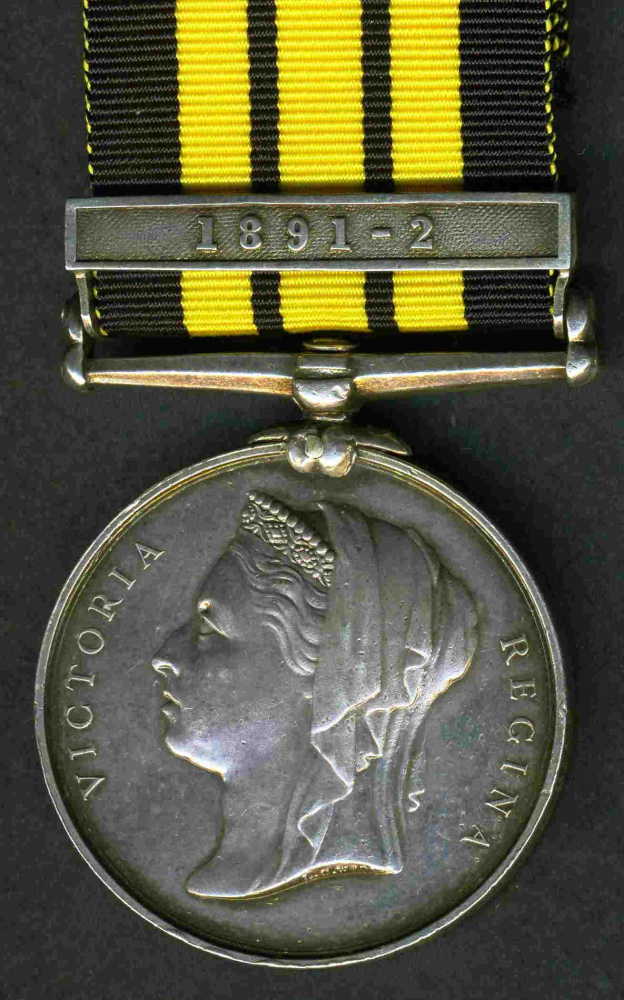 The medal bore on its obverse the “old head” or “veiled head” of the Queen with the usual title and for its reverse adopted the existing design of the medal for the Ashantee War of 1873-74 – a very finely detailed scene, depicting forest fighting, with a British force firing into the bush at an advancing African enemy. It is highly regarded by collectors for its aesthetic quality.

Some of the medals and clasps were awarded in fairly large numbers (in terms of colonial campaigns) where sizeable forces had to be deployed to take a territory or suppress a revolt. Examples of East and West Africa medals awarded in large numbers are those for Benin 1897 and Witu 1890 (which both involved sizeable naval elements) and Sierra Leone 1898-99. Some, on the other hand, were awarded in very small numbers. Dawkita 1897 was given to only about 90 men under Lt. F. B. Henderson RN, who defended that town in the Gold Coast hinterland against Sofa slavers, while for operations in 1893 along the Juba River only 21 clasps (Juba River 1893) were issued. Some medals are scarce to the Royal Navy and Marines, since only small numbers of men were landed for service ashore – examples are the dated clasps 1887-88 (38 to naval recipients) or 1898, awarded to approx 10 men of HMS Heron. 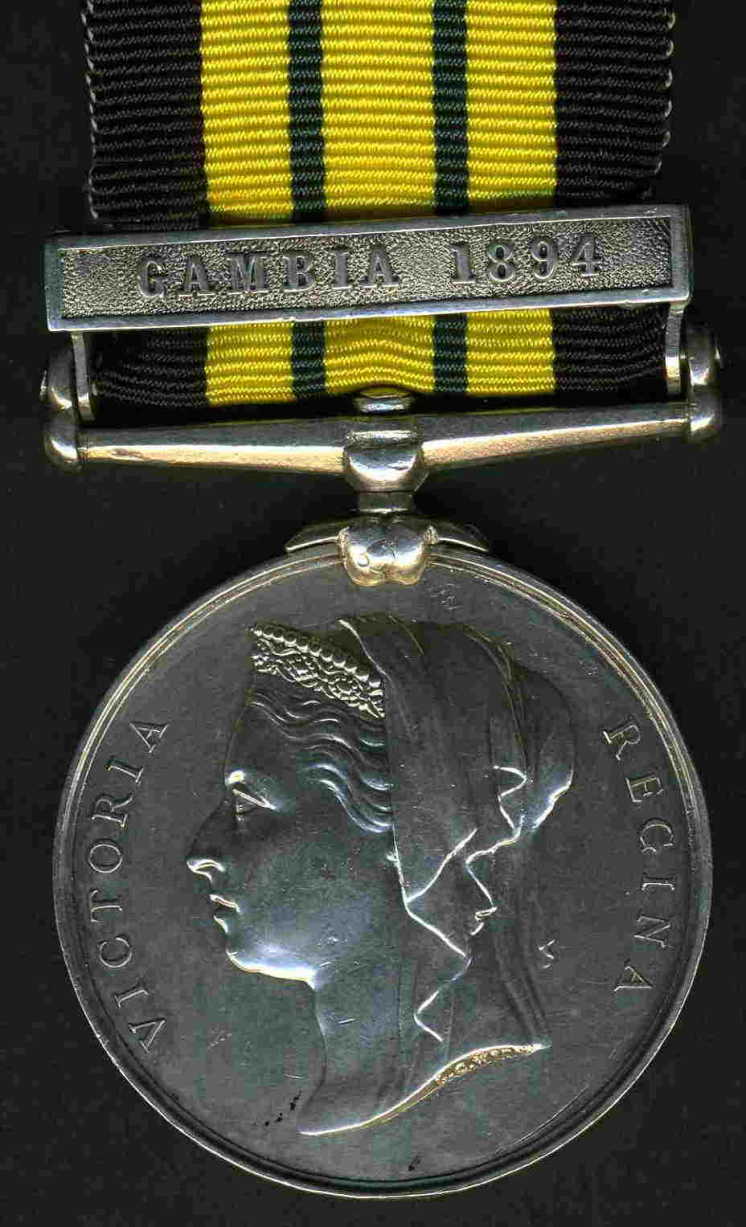 Many clasps were awarded for service in small “punitive expeditions” against local leaders who had offended (or were deemed to have offended) against British interests, usually by attacking trading posts or merchants. Examples are Benin River 1894 and Brass River 1895. Some involved repeated operations against the same target – like those for expeditions against chief Fodeh Silah in the Gambia area – e.g. clasps 1893-94, Gambia 1894. Fodeh Silah eventually crossed into French territory and surrendered to their forces.

In terms of effort, perhaps the most interesting clasp is Lake Nyassa 1893. This was given for a truly extraordinary expedition, which involved the manufacture of sectional boats in Jarrow on Tyneside, transporting them by ship to East Africa, carrying them in pieces 200 miles overland and then assembling them on the shores of Lake Nyassa so that a naval and Indian force could cross the lake and exact retribution against Chief Makenjira. What is just as remarkable – apart from the sheer effort that went into all this – is the fact that two very different medals were given to the forces which took part. Royal Naval personnel were given the East and West Africa medal with clasp Lake Nyassa 1893, while the approx. 100 Indian (largely Sikh) troops who took part were given the Central Africa Medal. It is not known why the men who served on the same campaign should have received different medals – but they did! Only 29 clasps were awarded to the naval personnel involved, but it is noteworthy that many of these men claimed duplicate and even triplicate awards, claiming that the original was lost or stolen, but perhaps reflecting the fact that they were selling their rare medals for a good price to collectors even then! A similar situation occurred with the rare Liwondi 1893 clasp (only 31 issued to RN), where the Indian soldiers deployed in operations in the Shire Highlands of Nyasaland received the Central Africa Medal, not the East and West Africa which was awarded to the naval personnel engaged. 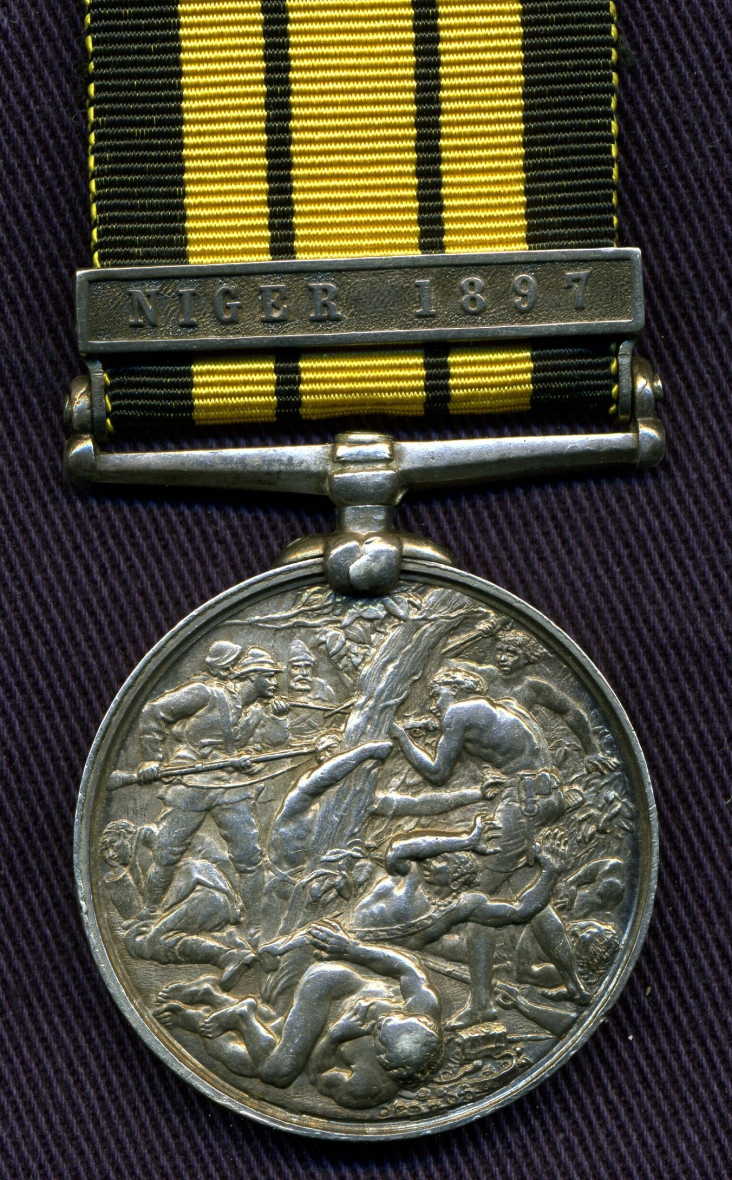 Perhaps the most remarkable in terms of imperial achievement is Niger 1897, where very small forces of African soldiers under British officers absolutely destroyed within weeks the cavalry armies of two huge emirates, with the effective use of Maxim machine-guns. Huge areas were added to the British holdings in the Niger area by the conquest of these ancient states by approx. 700 men operating along the Niger. 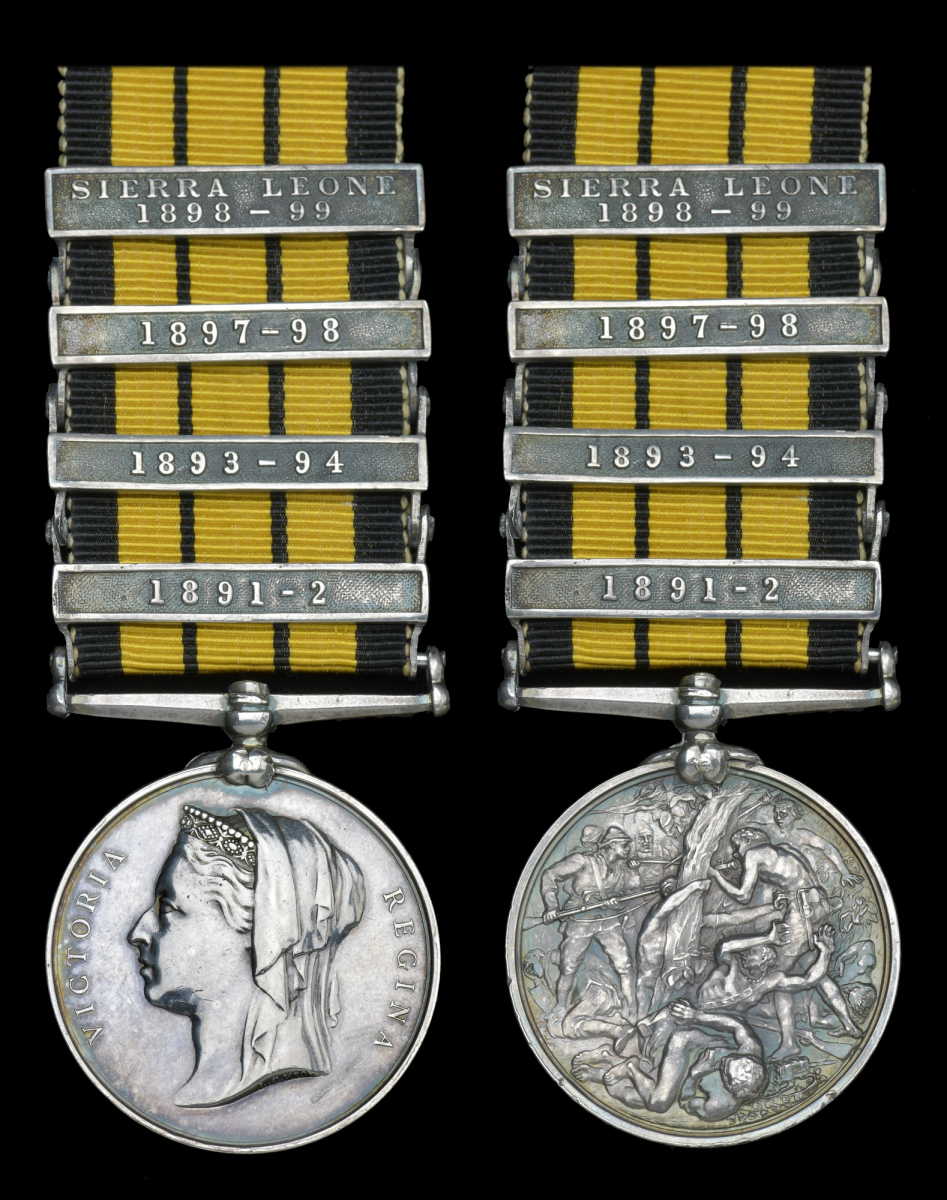 A multi-clasp medal. Many men must have earned them, but examples are now scarce.

The medal was not awarded without a clasp (except for the instance of M’wele related above). It was originally proposed that recipients who already wore the Ashantee Medal of 1873-74 should simply receive the appropriate East and West Africa clasps to add to that medal, as earned, but examples of this practice are very rare in reality and any recipients of the Ashantee Medal of 1873-74 who later earned clasps for “East and West Africa” service tended to receive a separate medal. Bronze awards also exist (e.g. as awarded to non-combatant Indian “followers”) but they are rare.

Clasps awarded on the East and West Africa Medal :

1887-8 for expeditions against the Yonni tribe in Sierra Leone.
Witu 1890 for the campaign on the East African coast against Sultan Fumo Bakari.
1891-2 for expeditions against chief Fodeh Cabbah in the Gambia region.
1892 for the Tambi and/or Toniataba expeditions in Sierra Leone or the against the Jebu in Nigeria.
Witu Aug. 1893 for the Jongeni and Pumwani expeditions near Witu in East Africa.
Liwondi 1893 for an expedition on the Upper Shire in Nyasaland against the Yao chief  Liwondi.
Juba River 1893 for a naval expedition over only 2 days (23-25th Aug.) against the Somalis of Jubaland.
Lake Nyassa 1893 for the expedition which crossed Lake Nyassa to attack chief Makenjira
1893-94 for either the expedition against the Sofas of Sierra Leone or operations along the Gambia river against chief Fodeh Silah.
Gambia 1894 awarded to naval personnel for an expedition up the Gambia River against chief Fodeh Silah.
Benin River 1894 for an expedition along the Benin River against Chief Nana of Brohemie.
Brass River 1895 for an expedition along the Brass River to punish King Koko for raiding.
M’wele 1895-6 for operations against Mbarak’s stronghold at M’wele on the East African coast. Dated 1895 or 1895-6 but engraved on medal rim – no clasp.
1896-98 awarded for several small expeditions in the northern hinterland of the Gold Coast.
Niger 1897 for the conquest of Ilorin, Egbon and Bida in northern Nigeria.
Benin 1897 for the large-scale campaign which conquered the Kingdom of Benin.
Dawkita 1897 for the defence of the town of Dawkita, Gold Coast, against Sofa raiders.
1897-98 for several small campaigns in the Lagos hinterland and northern territories of the Gold Coast.
1898 awarded for a series of small expeditions in northern Nigeria.
Sierra Leone 1898-99 for service in the rebellion in Sierra Leone known as the “Hut Tax War”.
1899 awarded for service in any of three expeditions in the Niger area.
1900 for the Munshi and/or Kaduna expeditions in northern Nigeria. 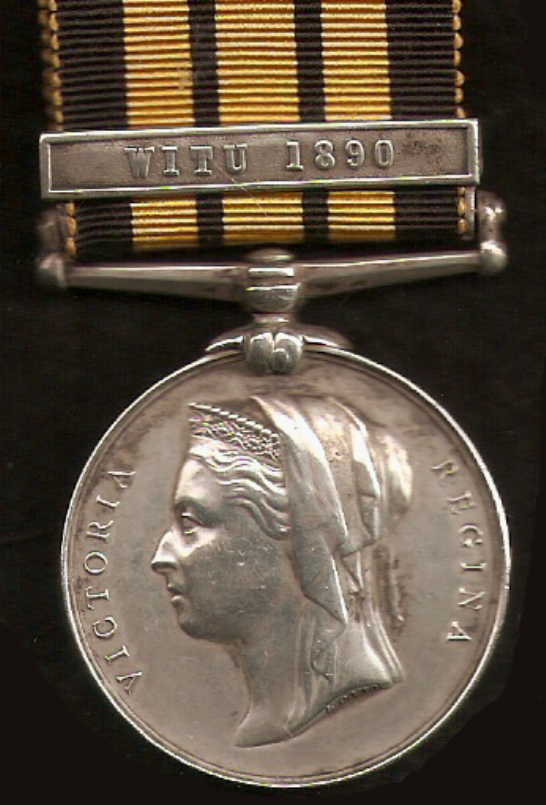 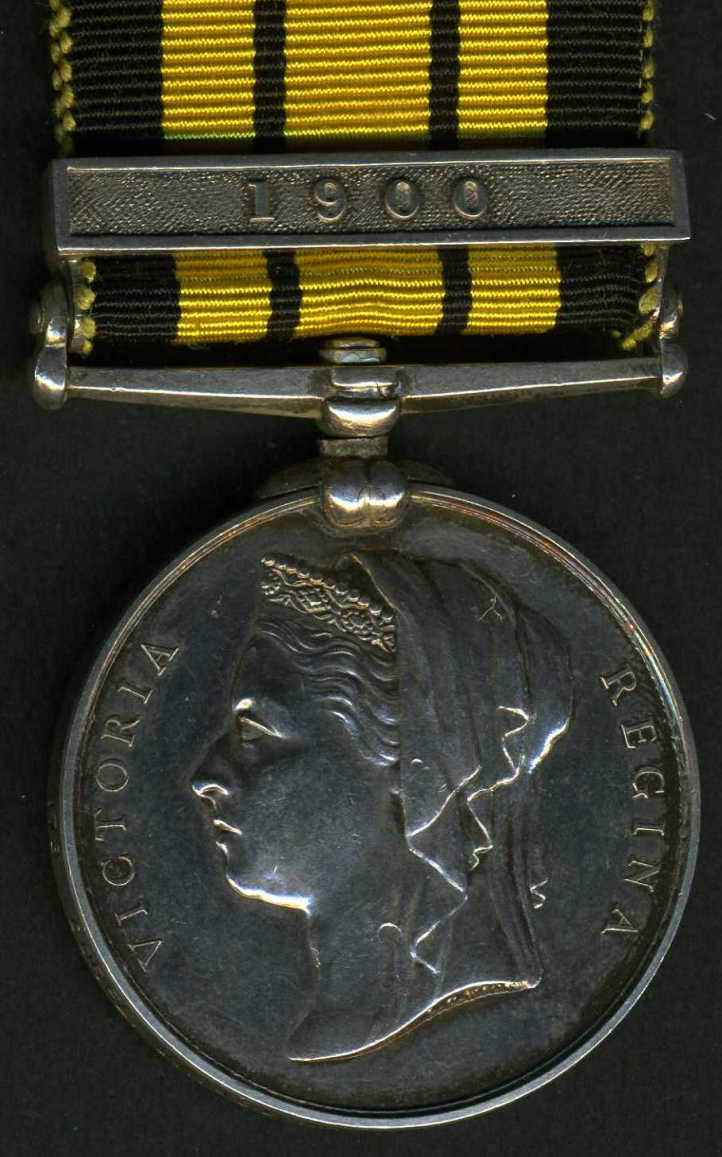 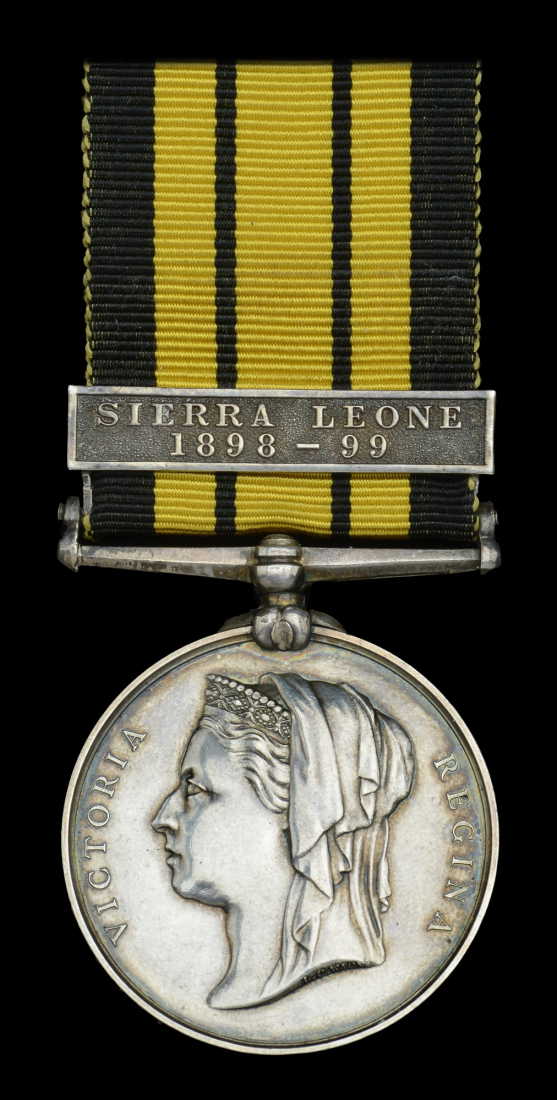 The East and West Africa Medal was superseded in 1900 by the new Africa General Service Medal, which was to be issued until 1956 (though not under George VI); no fewer than 45 clasps were authorised for this medal. It is not unusual – for obvious reasons – to see the East and West Africa Medal worn alongside the Ashanti medals for 1896 and/or 1900 and the Africa General Service Medal. Many men must have received such combinations, but survivals as groups are rare and singles much more commonly seen. 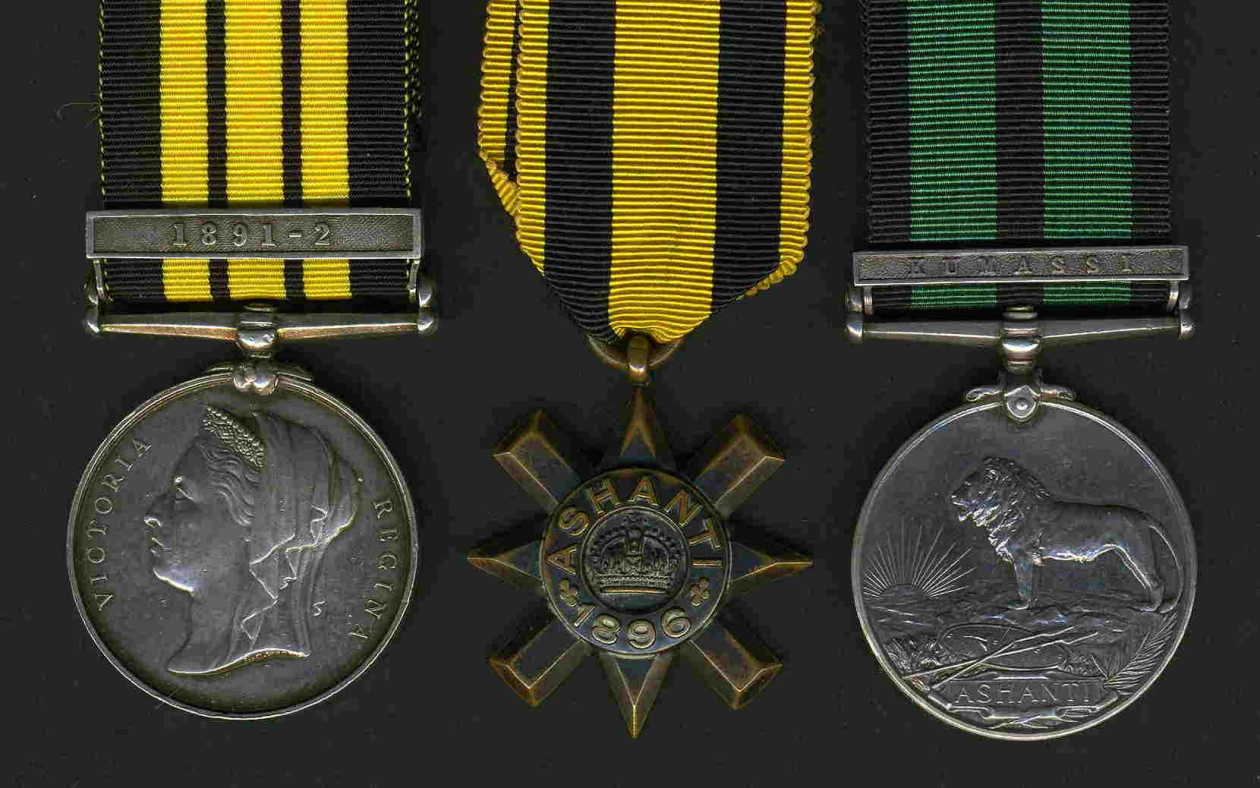