At the beginning of the Second World War, France of course resisted the German onslaught in the west and in the

early days of the war awarded medals for the 1939-40 campaign. The most familiar award from this time is the revived Croix-de-Guerre. This “War Cross” was originally instituted in 1915 to reflect a “mention in dispatches” and was widely awarded, with different dates to the reverse, to French and allied forces during the First World War. Re-established by decree in September 1939, the official WW2 awards for this early period had the single date 1939 on the reverse and a new ribbon – red with four narrow green stripes. After the German occupation and the establishment of Marshal Petain’s collaborationist “Vichy” government, this version was abolished by decree of 28th March 1941 and a new Vichy type inaugurated. Of the same basic pattern, officially issued types had a different ribbon – a rather striking green with black stripes – with reverse dates 1939-1940 in two versions, with rounded “3” or angular “3”. Other dated versions of the Vichy type are known, but regarded as unofficial productions – with single reverse dates 1941, 1942, 1943 or 1944 – while a very different version, equally unofficial, replaced the usual allegorical head of the Republic on the obverse with a francisque (an ancient throwing-axe) and reverse legend Etat Francais with date 1944. These are quite scarce. All post-1940 types with single dates on the reverse are Vichy awards. 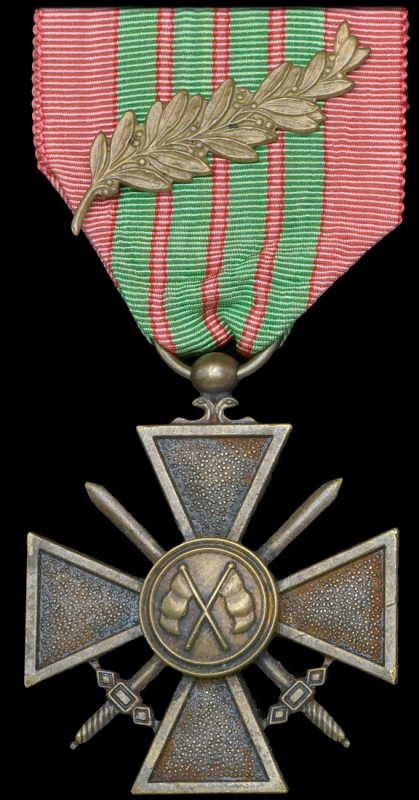 The obverse of the unofficial Giraud type

An interesting wartime variation of the Cross was created, without reference to the French “government in exile” in London, under the authority of General Henri Giraud, a French general who had been captured in 1940 but made a daring escape. Eventually commanding French forces and colonial troops in North Africa after 1942, he awarded his own types of Croix-de-Guerre, largely for the 1943 Tunisian campaign, which bore the reverse date 1943 and replaced the usual obverse head with crossed French flags. Unusually, the “Giraud” type apparently had two different ribbons – awards to the army used the old 1914-18 ribbon while those to air forces carried the 1939 ribbon. Original “Giraud” versions of the Croix-de-Guerre are rather scarce and can command high prices.

Similar local or “field” versions of the Croix-de-Guerre were created under the authority of General Henri Juin, a Divisional Commander captured in 1940, who on release was appointed by the Petain government to command Vichy forces in North Africa. However, after the allied invasion in Dec. 1942, he ordered them to fight with the Allies against the Germans and Italians and later commanded French forces in Italy, the Corps Expéditionnaire Français (CEF). The “Juin” style crosses – otherwise of standard type though often cruder in manufacture – are found with a range of different dated reverses – 1939-41, 1939-42, 1939-43, 1939-44.

A scarce type of Croix-de-Guerre was produced in London (“de Londres”) during the war, with a variant head on the obverse and just a blank roundel, with no date at all, on the reverse. Original examples of these are scarce on the collectors’ market.

Reverse of the Cross to the French Legion in Russia

A very rare French war cross was the bronze Croix-de-Guerre de la Legion des Volontaires Francais “contre le Bolchevisme”. Instituted in January 1942, approx. 400 were awarded to the little-known “legion” of French volunteers who served alongside German forces in Russia after 1941. The cross pattee, without crossed swords, featured in its obverse centre an eagle with outstretched wings, bearing the French shield, and circled with laurel and with the simple wording Croix / de Guerre / Legionnaire to the reverse. Its ribbon was green edged with black, with seven thinner black stripes to the centre. This cross is especially rare since, after the war, its possessors could prosecuted and imprisoned as traitors so that many understandably chose not to retain the medal; examples are therefore expensive on the collectors’ market at around £250, but they have been much faked – buyer beware!

The official post-1944 re-instituted Croix-de-Guerre as awarded to foreign recipients (like British troops) is usually found with general reverse dates 1939-45 and recommendations or citations are available for some in The National Archives (series WO.373). Where they survive in British archives they make interesting reading and reflect a large range of circumstances leading to award – from personal gallantry in action to meritorious service over a period. Two examples show the range of the type. Sgt. P. H. Purcell of 137 Field Ambulance, RAMC, received the Croix-de-Guerre in 1940 – “As leader of a section of British stretcher bearers placed at the disposition of a Demi Brigade of the Foreign Legion on 13th May 1941, he worked continuously from the beginning of the action. He demonstrated after the bombardment of the aid post great calm and devotion to duty”. Sgt. D. J. E. Roberts of 123 Light Anti-Aircraft Battery received the cross in Jan. 1945 for an incident in July 1944. When an injured pilot, whose plane had been brought down in flames, parachuted into the River Orne, Roberts rushed from his gun position nearby and waded out into deep water, under enemy fire, to bring him back to safety. 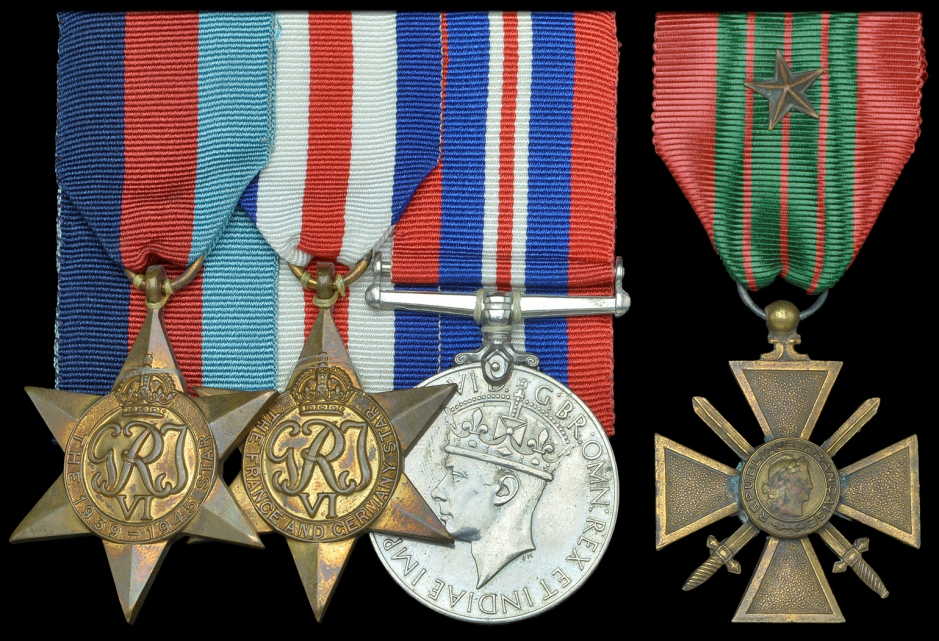 Understandably, British medal groups with a documented Croix-de-Guerre (e.g. with original award document and citation) are very collected and, depending on the circumstances of the award, can fetch high prices.

Since the Croix-de-Guerre was in its origins meant to reflect a “mention in dispatches”, ribbon emblems were worn to show the level of “mention”. These emblems (as had been used in WW1) were :

Bronze star – for mention in Brigade, regimental or unit dispatches.

Unlike the British system, where only one “mention” emblem is worn for WW2 no matter how many times the recipient may have been “mentioned”, the French system allowed the wearing of a number and variety of emblems on one medal to show multiple awards, so that one may see a Croix-de-Guerre with a range of emblems on its ribbon. They were also carried on the ribbon of the “Exterior Operations” Cross (see below).

As well as the various types and varieties of Croix de Guerre a number of other distinctive types of “war cross” were conferred by the Vichy and Free French authorities. 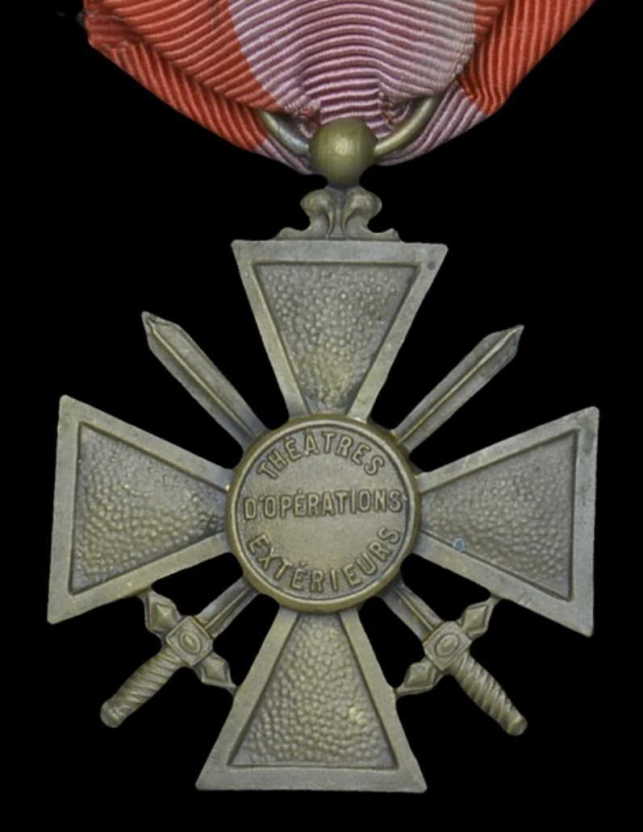 A Croix-de-Guerre type which continued to be awarded by both the “Free French” government in exile in London and the Vichy government was the cross “for Exterior Operations” (Operations Exterieures) which, as its title implies, would be awarded for military operations outside metropolitan France e.g. in the French colonies. Instituted in 1921, official Vichy issues produced during the war had the usual allegorical female head of the Republic on the obverse with reverse legend Theatres / d’Operations / Exterieures, while locally or “field” produced types simply had T.O.E. Its ribbon is sky blue with wide red edge bands. The official types are relatively easy to find and inexpensive while the “T.O.E.” versions are scarcer.

Another “war cross” which remained in use from earlier times was the Croix de Combattant (Combatant’s Cross). Instituted in June 1930, it was essentially produced as a result of considerable pressure from WW1 veterans to distinguish those who had actually seen combat service “at the front” from those who had served “behind the lines” or in support roles. The bronze cross carried on its obverse the usual female head (helmeted) symbolising the Republic with Republique Francaise around it, while its reverse simply bore Croix de Combattant around a sword and sunburst. Its ribbon was sky blue with seven stripes of rose red. The cross remained in use in its established form between 1939-45 by “Free French” forces; the Vichy version had a different ribbon (sky blue with five black stripes) and an altered reverse with Croix de Combattant 1939-40 around a sword and sunburst. Originals of the Vichy type are quite scarce on the market. 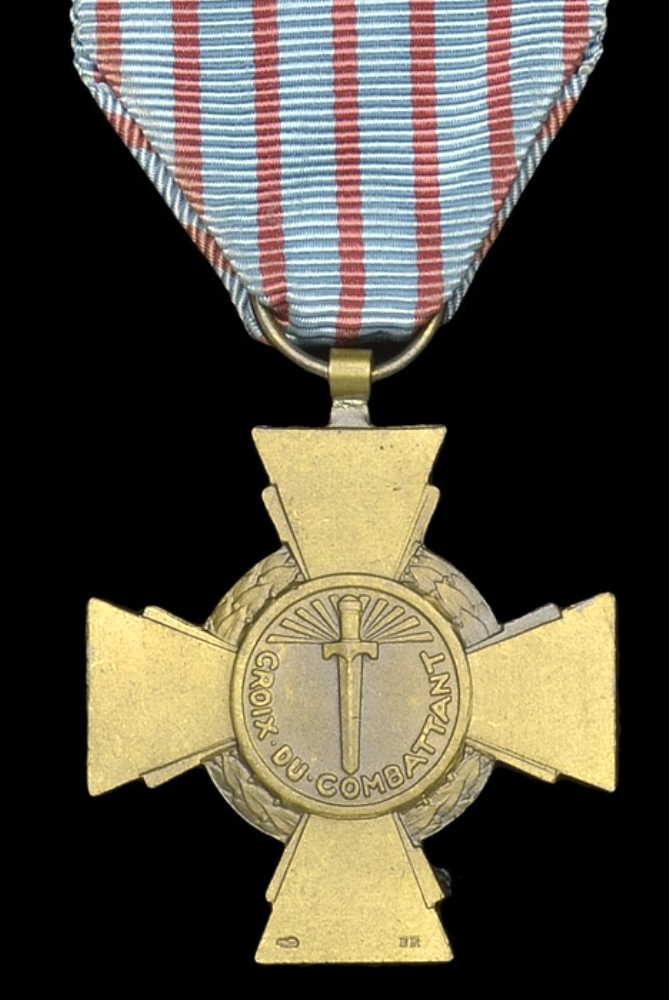 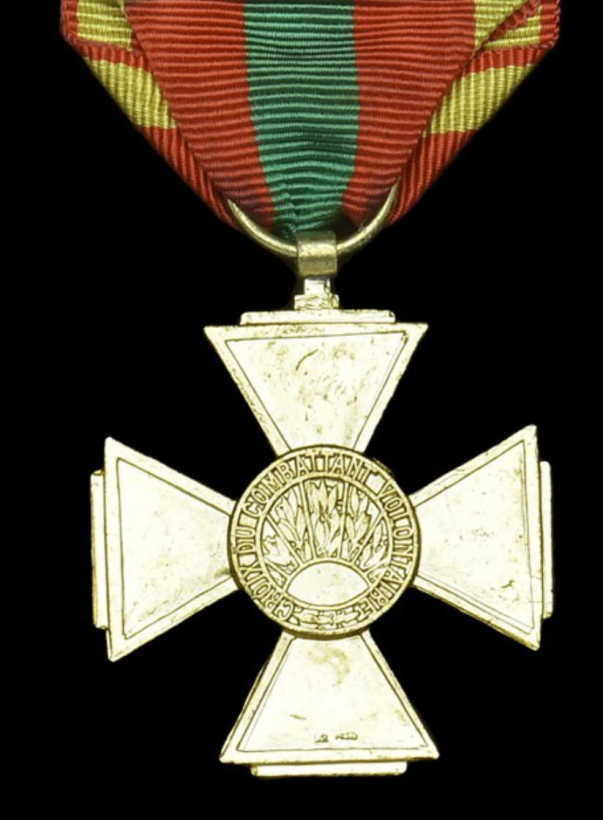 Yet another survival from an earlier foundation was the Volunteer (or Voluntary) Service Cross (Croix de Service Volontaire). First established in 1935 to reward those who (as its title suggests) volunteered for war service 1914-18 (i.e. were not conscripts), the rather more decorative cross was made in bronze, its arms bearing oak and laurel leaves, with a helmeted soldier’s head over a sword in the obverse centre and legend Republique Francaise. The reverse carried Republique Francaise / Combattant Volontaire with either a single laurel frond or a spray of several and dates 1914-18. This cross was revived in 1953 to reward 1939-45 service, with those dates on the reverse and an altered but equally colourful ribbon – red with a central green band, flanked by yellow stripes. Another version of this cross was instituted in 1954 to reward voluntary service with the French Resistance during the war; the obverse is essentially the same as the other but it carries on the reverse the familiar “Free French” emblem, the Cross of Lorraine, and has a ribbon of black with red borders and four stripes of green.

This award should not be confused with a 1934 decoration, the Croix des Services Militaires Volontaires (Cross for Voluntary Military Service) which was awarded in three grades – bronze, silver and gold – simply for undertaking military service voluntarily and not specifically (as with the above award) for combat duty. The Cross as awarded for 1939-45 service bore on its obverse centre the head of a helmeted soldier (with two variations in size) on a lozenge and Republique Francaise; the reverse carried Services Militaires Volontaires. A metal anchor was worn on the ribbon of naval awards and a small eagle with outstretched wings on the suspension of airforce awards. The ribbon was navy blue with a central red stripe for the bronze 3rd class, the same but with white edges for the silver 2nd class; the gold 1st class bore the same ribbon as the 2nd but added a rosette. The cross ceased to be conferred in 1957 but examples are reasonably easy to find.

The different types of War Cross produced during WW2 by the various French authorities – in exile in London, in Vichy France or overseas – would form an interesting subject for a specific collection, also allowing for the fact that, as with other French medals, manufacturers’ varieties can also be found. Generally speaking, with only a few exceptions, they are easily available on the collectors’ market and not too expensive! 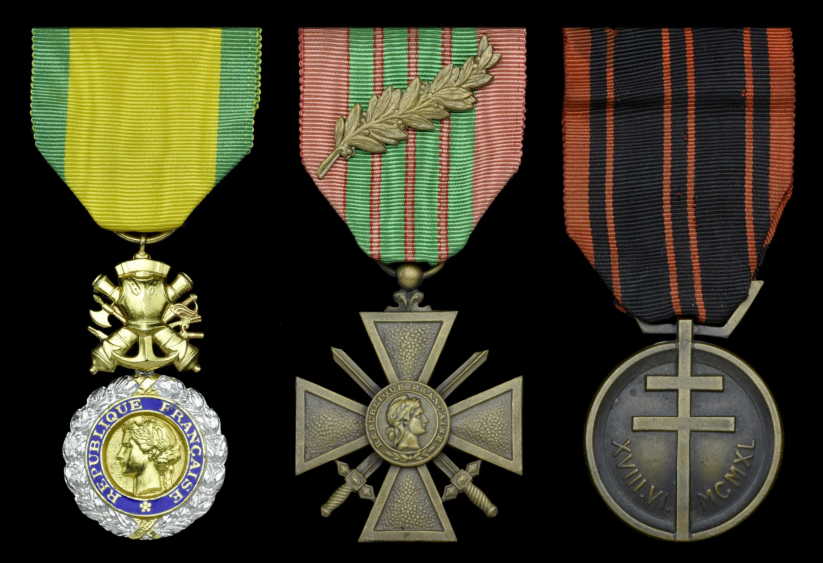 A French recipient’s medal group with the  Medaille Militaire, (Military Medal), Croix-de-Guerre with bronze palm and medal to members of the Resistance.