Home/Medals Articles/How to capture a town : a Distinguished Service Medal to a Tigris gun-boat.

How to capture a town :

A Distinguished Service Medal for Mesopotamia.

The Distinguished Service Medal was one of the new bravery medals like the Military Cross and the Military Medal which originated during the First World War. Instituted in 1914, it was intended to reward naval acts of gallantry which would not merit the existing Conspicuous Gallantry Medal. It is perhaps on a par with the Military Medal in the ranking of gallantry awards. At any rate, it is a far rarer award than many might realise.

If one looks at the approximate figures for the more familiar gallantry awards (including bars) for 1914-18, its rarity is put into context : 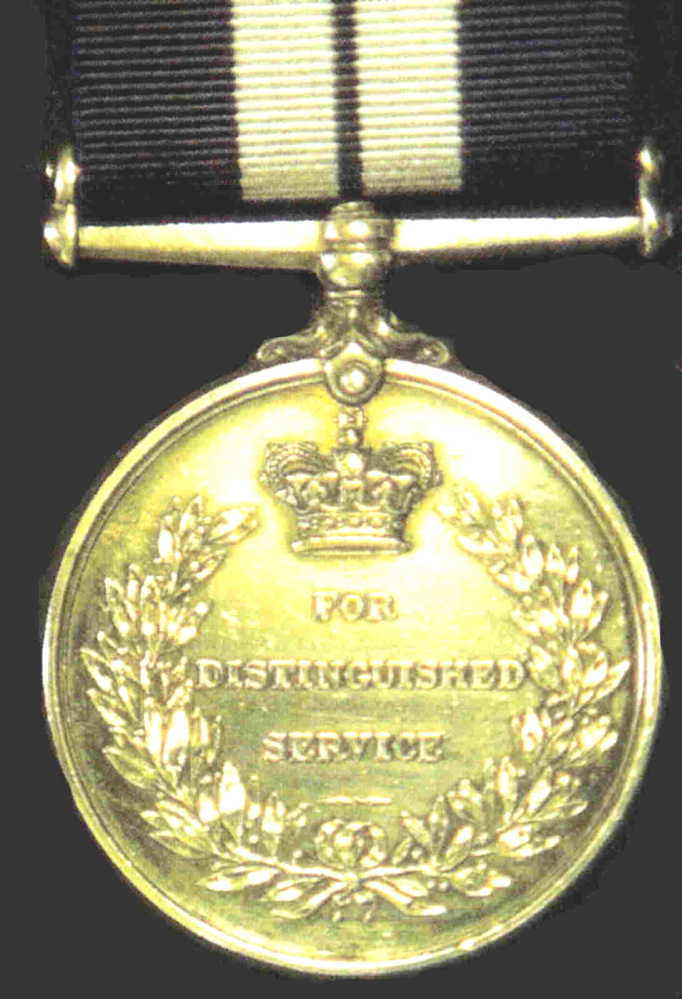 Naturally, given Britain’s sea-power and the global scope of the war, there are D.S.M. awards covering all sorts of actions and all locations, some very unusual. Each one has its own story to tell and whilst some London Gazette headings undoubtedly do not make for very exciting reading, there are many for very specific actions which certainly do – larger operations like the Gallipoli landings or evacuation, smaller operations involving Q-ships or submarine service, down to very individual and often desperate ship-to-ship engagements, which read like something out of the Napoleonic Wars. Then there are those awarded for service in the remote “side-shows”: operations on the Great Lakes in East Africa, in the Sea of Marmora or on the Dvina in Russia during the Civil War.

One such D.S.M. which recently came to notice was awarded for operations in an equally neglected “side-show”, being granted for service on the Tigris gunboats during the Mesopotamian campaign.

There was, of course, a British and Indian army fighting its way through what is now Iraq from the earliest days of the war. From 1915, with the advance which was halted at Kut, a strong British naval force was actively engaged on the great rivers of Mesopotamia, the Tigris and Euphrates. Not only did British ships carry stores and equipment up and down the river and take the wounded away, they also engaged in active operations in support of the land campaigns at various phases of the advance – scouting, guarding the flanks, shelling the enemy. Sizeable warships like Hardinge, Espiegle, Clio and Dalhousie could and did operate for some distance along the wide estuaries of the great rivers, based at the port of Basra, in the Shatt-al-Arab and in the Persian Gulf. 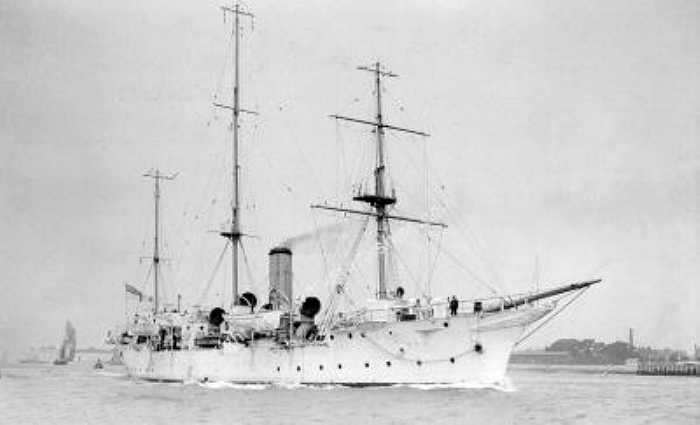 HMS Espiegle – one of the larger warships operating out of Basra

But further upriver, aggressive operations were the prerogative of the gun-boats – smaller, often custom-made or scratch-built warships of lighter armament and shallower draught which could penetrate far upriver and serve on the flanks of British and Indian columns which, for the sake of transport and supplies, used the great rivers as their arteries of advance. Some of the gunboats which operated on the Tigris and Euphrates at various times during the war were Blosse Lynch (a boat requisitioned from Messrs. Blosse Lynch of Basra), Lewis Pelly, Shaitan, Shushan, Sumana, Comet, Grasshopper and Greenfly. Some of these boats – Shaitan for example – although grandly designated “H.M. armed steam-launch”, were nothing more than harbour tugs carrying a piece of artillery. Between them, these small vessels, whose complements were usually taken from the larger warships operating in the Gulf or out of Basra, saw a remarkable amount of service and some very hard fighting.

HMS Grasshopper – a typical RN river gunboat of its era

To take just one of these, the tug/gunboat Shaitan (a shaitan being a malevolent spirit or devil) had a complement of only one officer (Lieut. Mark Singleton) and eight men, mostly drawn from HMS Clio, her armament comprising a single 12-pounder gun mounted towards the stern and one machine-gun. Nevertheless, Shaitan and her sisters played a major role in General Sir Charles Townshend’s rapid advance up the Tigris from Basra via Qurna to Amara in the Spring of 1915. General Townshend – the hero of the Defence of Chitral in 1895 – commanded the 6th Division of this army and he was given the job of leading the advance up the Tigris from Basra. Using Qurna (Kurna) as a base – captured as early as December 1914 and successfully held against a Turkish attack in April 1915 – Townshend’s next task was to advance up the Tigris, piercing Turkish lines of defence and aiming for the important regional centre of Amara. 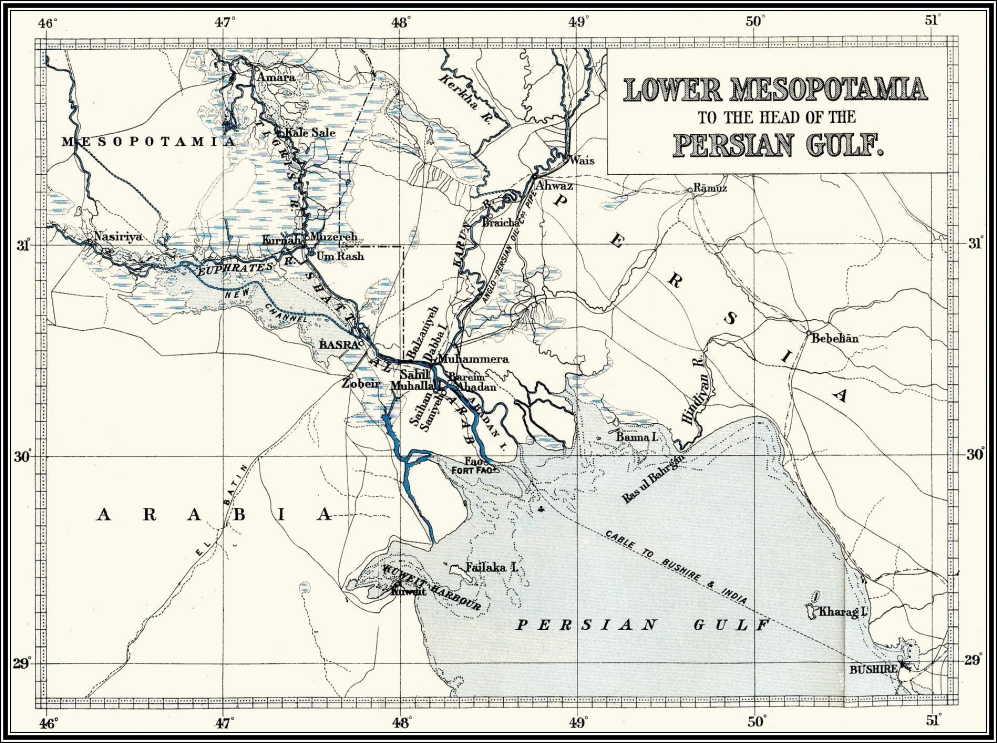 After brushing aside Turkish opposition outside Kurna (Qurnah), Townshend concentrated his force at Abu Aran and began the northward advance on June 1st. The river flotilla was very much part of Townshend’s plan, moving upriver in advance of the infantry and raft-borne troops and led by Shaitan and Sumana, acting as minesweepers. By this stage, Turkish forces – on land and on the river – were streaming away northwards and Townshend was anxious to keep pressure on them by a rapid pursuit. On the evening of June 1st, Shaitan sighted the Turkish gunboat Marmariss, the largest of a fleet of fugitive Turkish vessels, and opened fire with her 12-pounder gun, doing condsiderable damage. Shaitan was joined, as dusk fell, by Clio, Odin and Espiegle and between them, they hammered away at Marmoriss and captured Turkish barges laden with supplies and troops. As darkness ended the action, Shaitan captured a boat full of Turkish soldiers and anchored near the Turkish gunboat Bulbul, which she had sunk earlier in the day. 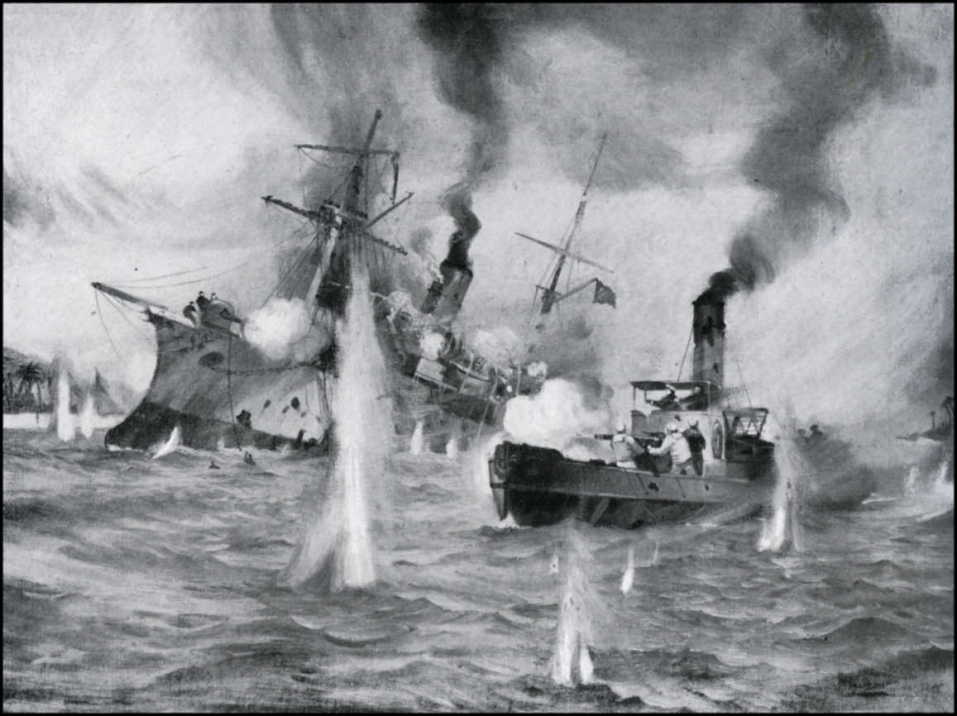 Shaitan in action – attacking the Turkish gun boat Marmariss. Was the Turkish boat that big??

As early as 2.00 a.m. the next day, Shaitan and the river boats renewed the pursuit, but the larger warships Espiegle and Clio soon found the river too shallow and had to leave further action to the smaller vessels. Marmariss was found on fire, aground and abandoned further upriver. It was clear that the Turkish retreat had become a rout and Townshend was anxious to push on as fast as possible – outstripping his own slow-moving infantry by joining the river fleet of seven gunboats himself. Throughout the 2nd and 3rd June the small flotilla pressed on up the Tigris, passing groups of fleeing Turks on the riverbank.

Halting 12 miles from Amara – the state of whose defences was unknown – Townshend initially ordered a halt, but the Senior Naval Officer, Captain Nunn, convinced Townshend that they should push on. Accordingly, at 9.45 a.m. on June 3rd, Shaitan sailed well ahead of the rest of the “fleet” as a scout.

What happened next, bearing in mind that this tug had only nine men aboard and one 12-pounder gun, is one of those “amazing stories” that seem to be more the realm of fantasy that fact. As Shaitan approached Amara, which lay across both sides of the Tigris, she could see Turkish troops fleeing in and around the city. Shelling a barge full of troops, Shaitan passed right through the city, with an estimated 2,500 Turkish soldiers milling about in all directions around her. Not one fired a shot and the gunboat proceeded northwards beyond the town. Here, she accepted the surrender of six Turkish officers and over 100 men, whom she “escorted” downriver back towards the city. The prisoners were ordered to march along the bank, “covered” by Shaitan’s one machine-gun. A few hundred yards further along, another 150 soldiers surrendered, joining the column marching alongside the ship. 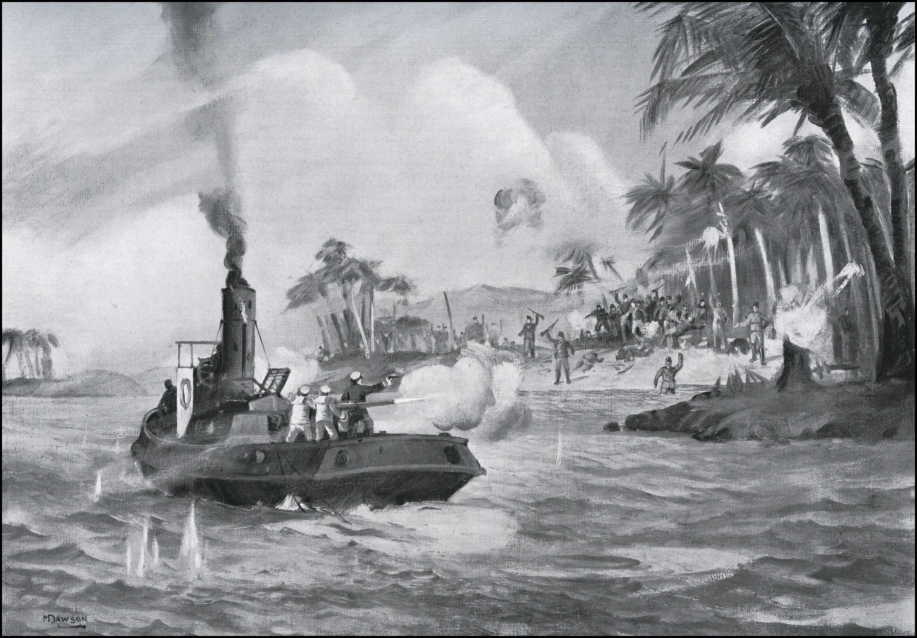 As they reached the northern outskirts of Amara – still occupied by thousands of enemy soldiers – Shaitan moored, sat her prisoners down by a coffee-shop and waited the arrival of the other gunboats, which were still some distance away. As the Official History rightly says, “greater daring than that of the Shaitan can hardly be imagined …. a very little resolution on the enemy’s side would have disposed [of her crew of nine] easily at point-blank range”.

But this was not quite the end of an adventurous day. Shaitan was joined by Comet and the rest of the flotilla in the afternoon and here General Townshend – who was aboard Comet – recieved the formal surrender of Amara. There now followed the fairly ludicrous process whereby an entire town and garrison were “secured” by the combined crews of the river flotilla – a few officers and forty-one men. One officer and 15 men were posted to “keep order” on the river frontage of the town; one officer and two men accepted the surrender of a 400-strong battalion of the Constantinople Fire Brigade Regiment; two British soldiers and a sailor were posted to guard the Naval Barracks and its garrison; four sailors “held” the Turkish army barracks and the river gunboats were deployed along the Tigris front to “cover” the town with their guns. There can be few examples in British naval history where so few men with such meagre resources achieved such a spectacular result!

Later in the day, two thousand Turkish troops who approached Amara from the north were shelled by Shaitan which moved out to intercept them; fifty surrendered to her on the spot and the rest scattered. 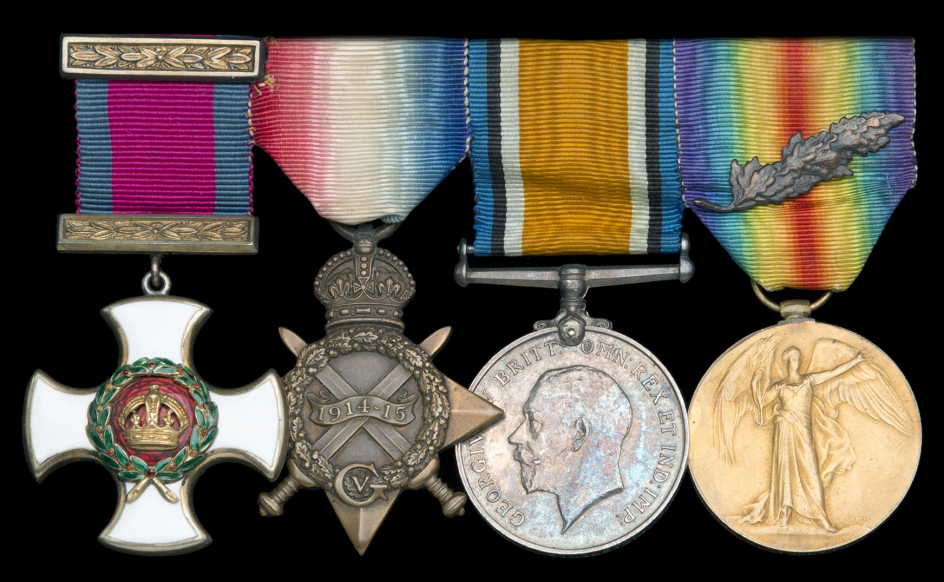 For their daring exploit and resolution, Shaitan’s comanding officer, Lieut. Singleton, was awarded the D.S.O. and two (out of eight) crewmen awarded the D.S.M.; one of these – to Leading Seaman Rowe – is illustrated below. As the Official History remarks, “These awards can seldom have been better deserved”.

“For his services during the advance from Qurnah and capture of Amara at the beginning of June 1915. Lieutenant Singleton was in command of the armed launch Shaitan and displayed great skill and energy in pursuit of the enemy gunboat Marmarris and other craft. He went ahead of the main force through Amara in a gallant manner and performed the remarkable feat in his small armed tug of bringing to surrender a body of about 11 officers and 250 Turkish troops, whom he had intercepted, and causing a large number to retire, thus largely contributing to the surrender of the town.” 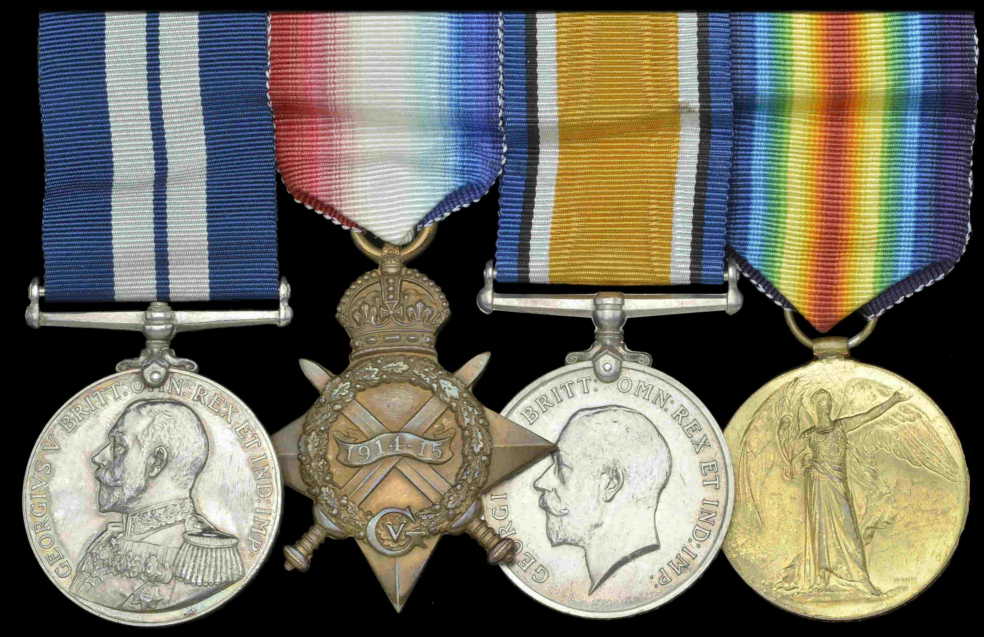 There is no doubing the audacity of Shaitan in her voyage to and through Amara nor of that of her sister ships – during the 1914-18 war few large towns can have fallen to such miniscule forces. But it is equally a reflection on the totally demoralised state of the Turkish Army. Unfortunately for General Townshend, this state of affairs did not last – his advance upriver saw him engaged in fierce actions at Kut and at Ctesiphon before he was forced to retreat and then faced the famous – and humiliating – siege at Kut-al-Amara. The war in Mesopotamia was nowhere near over at the time Shaitan took Amara and her own career had a sad end – later in Townshend’s campaign around Kut, she ran aground on the Tigris. Stripped of her arms and equipment, she was abandoned on November 28th 1915. She may still be there !

For collectors with smaller wallets, the papers of relatively inexpensive 1915 trios to RN recipients would reveal service on the Tigris gunboats and are well worth looking out for.