The auction house Spink recently sold the South Africa 1877-79 medal, with clasp 1877-8 to a Pte. J. Hawkins serving in “Streatfeild’s Fingoes” and correctly identifies him as the only European “other rank” on that roll. The roll shows only 14 medals to this unit of African levies, but with no awards to the levies themselves. The giving of medals to African auxiliaries obviously caused confusion – some levy rolls, like that for Streatfeild’s, show that 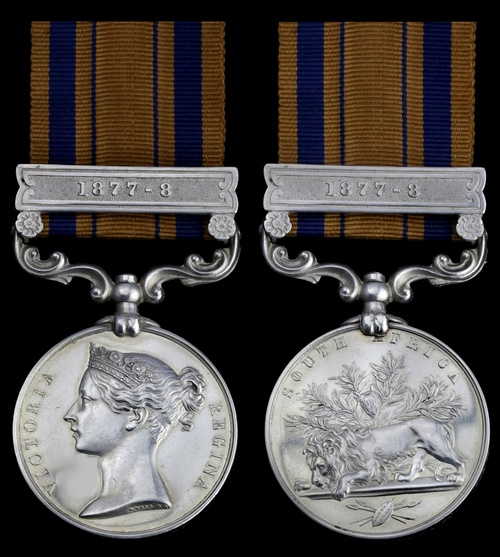 medals were only given to their European personnel (generally officers), whilst others show – or a least imply – that medals were given to the African soldiers e.g. in the Kamas Native Levy, the Komgha Fingo Levies, Herschel’s Native Contingent and Leach’s Fingoes, just to give a few examples. Many of these medals are unsurprisingly shown as “returned to the mint” since the authorities could not locate the recipients long after they had dispersed.

The roll for “Streatfeild’s Fingoes” [i.e. amaFengu or Mfengu – “Fingo” being the English usage at the time] shows, with one exception, only officer recipients – the Commandant, Captain F. N. Streatfeild, six Captains (one of whom, W. F. Bradshaw, was killed in action in 1878) and six Lieutenants. All the recipients received the clasp 1877-8 for service during the Ninth Frontier War, apart from Lieut. E. D. Weinand who had 1878 so presumably joined slightly later. The one exception on the roll is the medal to Pte. J. Hawkins – the only “other rank” on the Streatfeild list.

I found it intriguing to contemplate why just one Private (presumably a European) should have received the medal and clasp with this unit. It occurred to me that he was perhaps a serving British soldier or recent ex-soldier who had been brought in as an instructor in drill or musketry. But such a man would presumably have been moved up a few degrees in rank to give him some authority over his men and not remained as a Private.

The other possibility which occurred was that “Pte. J. Hawkins” was an officer’s servant or batman. If that was the case, it seemed likely, since he was the only one listed amongst 13 officers, that he would have been the Commandant’s servant rather than that of another officer.

In this instance, Streatfeild himself came to the rescue. He wrote two books of relevance to this story – one (Kaffirland: A Ten Months’ Campaign) was a detailed account of his service with the regiment of Mfengu levies he commanded in 1877-78; the other (Reminiscences of an Old ‘Un) was a more general autobiographical account, but which nevertheless contained a great deal about his time in South Africa. 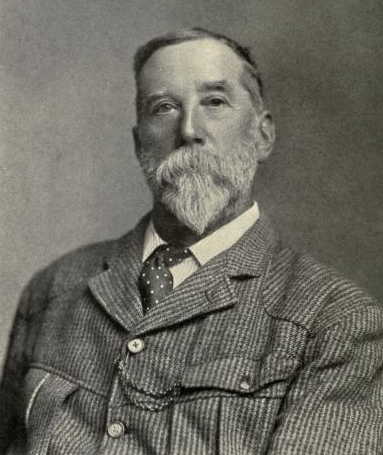 Frank Newton Streatfeild (1843-1916) was a remarkable and interesting man, born into a wealthy and old-established Kent family from Westerham, which produced a number of military and naval officers. He was indeed inclinded to a military career but was thwarted by his family’s Quaker links – the Quaker prison reformer Elizabeth Fry was one of his grandmothers. He was educated at Heidelberg and Eton and afterwards began a career with Trinity House. When he quickly found that he didn’t much like the work, he got an office job in insurance in The City and found that he didn’t like that very much either. So he and his wife ended up sheep and cattle farming at Netherby on the Scottish border, north of Carlisle, and when, by 1870, he found that he liked that no more than the others, he went out to Argentina (as you do) to take up flax growing in a new “colony” set up near Rosario. This project turned out to be based on a fraud in which Streatfeild lost a considerable sum, so he and his family ended up by 1871 living “on his own means” in Wickham in Hampshire, where he seems to have spent his time in hunting, shooting, fishing and cricket. All through his life he was a keen cricketer, fisherman, golfer and huntsman and later wrote numerous articles in magazines like The Tatler and The Field.

In 1875, family friends in Cape Colony offered him the chance to go and stay with them to learn the basics of ostrich farming – ostrich feathers then being at the high end of ladies’ fashion accessories. You can’t claim that Streatfeild wasn’t ready to have a go at new adventures! Accordingly, in July 1875 he set off on the S.S. Nyanza for the Cape to begin his apprenticeship as an ostrich farmer and then set himself up at Fairy Knowe near George in the Western Cape, “the loveliest place I ever lived in”.

It is at this point that Streatfeild starts to refer to “Jim” or “Jimmie” Hawkins and herein lies another remarkable story. It turns out that when Streatfeild went to South Africa in 1875, he took this man with him, as a personal servant, handyman and bodyguard. He clearly knew Hawkins well – he claims that Hawkins had already worked for him for three years, was a good shot and something of an experienced poacher! Hawkins (always simply as “Jim” and usually as “faithful” or a “loyal servant”) also occurs in Streatfeilds’ book on the Frontier campaign on several occasions : “I ought to give Jim a paragraph to himself as he will frequently appear in these pages. He had worked for me for some years in Hampshire, of which county he was a native, and when I decided to spend some time in the Cape Colony, I sent him a message and said I should be very glad if he would like to come and work for me again. He came to me at once and a more faithful and trustworthy servant never yet followed his master’s footsteps”.

The only man who “fits the bill” as this James Hawkins was born in Wickham (where Streatfeild ended up living) in 1843/44, the son of a bricklayer and himself at one stage a bricklayer’s labourer; Streatfeild mentions at one point – when he was building and later fortifying a new house in the Transkei – that Hawkins’ experience as a builder and bricklayer was of real value.

What on earth induced a bricklayer’s labourer in Wickham to accompany his master on an ostrich farming venture in remote South Africa? Perhaps a hope for a better life and a new start, but it betokens at least an adventurous spirit and no doubt a certain degree of courage! He could never have dreamed that he would end up serving in an African regiment in a colonial war! 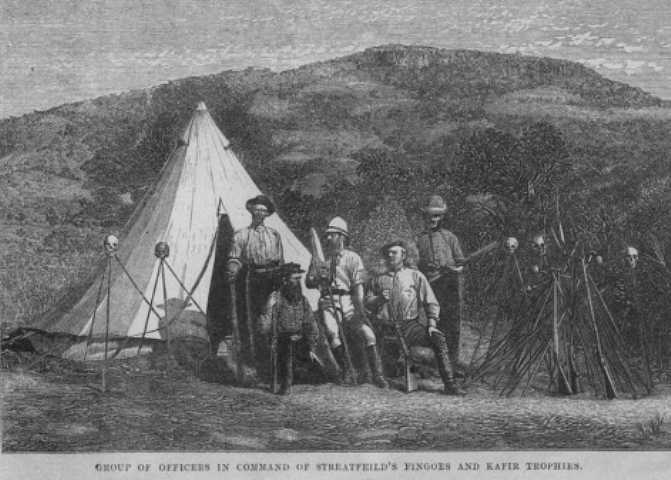 Hawkins is mentioned several times in Streatfeild’s Reminiscences. When the ostrich farming (with a certain degree of inevitability?) failed to suit him by 1877, Streatfeild was about to return home to England when he was unexpectedly offered the post of Magistrate at Willow Vale in the Eastern Cape and Hawkins was ready to go with him. Streatfeild had no sooner accepted this post, late in 1877, than trouble began to brew with the Galeka (Gcaleka), the Gaika (Ngqika) and their Xhosa allies in what erupted into the Ninth Frontier War (or “Fengu-Gcaleka War” or “Ngcayechibi’s War”). Equally unexpectedly, Streatfeild was then approached by a local Magistrate, Capt Rupert Lonsdale, who was raising Mfengu levies in the Keiskama Hoek area, and offered the command of a regiment of Mfengu. Streatfeild (who again cannot be accused of being reluctant to try new things!) immediately accepted and thus became Captain Streatfeild and Commandant of “Streatfeild’s Fingoes” based at King William’s Town. He notes in his Reminiscences that Jim Hawkins was with him when he first assembled his levies to inspect his new command and served with him throughout the subsequent campaign, which saw his men engaged in some very difficult fighting in the Amatholes /Amatalos and Pirie Bush. Hence Hawkins’ appearance as the only “other rank” in the medal roll. Streatfeild seems to have done very well as a levy commander, got to know and serve with Evelyn Wood and Redvers Buller and was noted as one of few levy leaders who actually led from the front; he was appointed C.M.G. for his services. 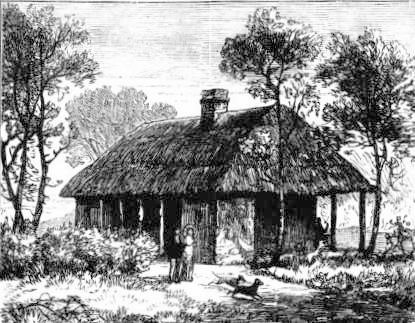 A Resident’s house in the Transkei : “These Magistrate’s houses are mostly of a primitive construction and are sometimes made with their own hands, whilst Kafir huts have even to be put up with until a better lodging can be built.”   (The Graphic)

After the long and arduous campaign, Streatfeild returned in January 1879 to the offer of the job as Resident and Magistrate at the isolated post of Willow Vale in the Transkei – “in the eastern part of the Galekaland territory which had belonged to chief Kreli” – a former enemy, well known to Streatfeild. By now, Streatfeild’s wife and one of his teenage sons had re-joined him from England and these three, still accompanied by Jim Hawkins as general servant and handyman, duly turned up at Willow Vale, where they found “a grotesque situation” – no house, no facilities, no neighbours. They began their life at Willow Vale by building simple and hugely uncomfortable grass huts, in local African style, but in time and with Hawkins’ help, they built a more suitable house, which they later saw fit to fortify, and Hawkins took up residence in a small hut of his own, with vegetable plot nearby. 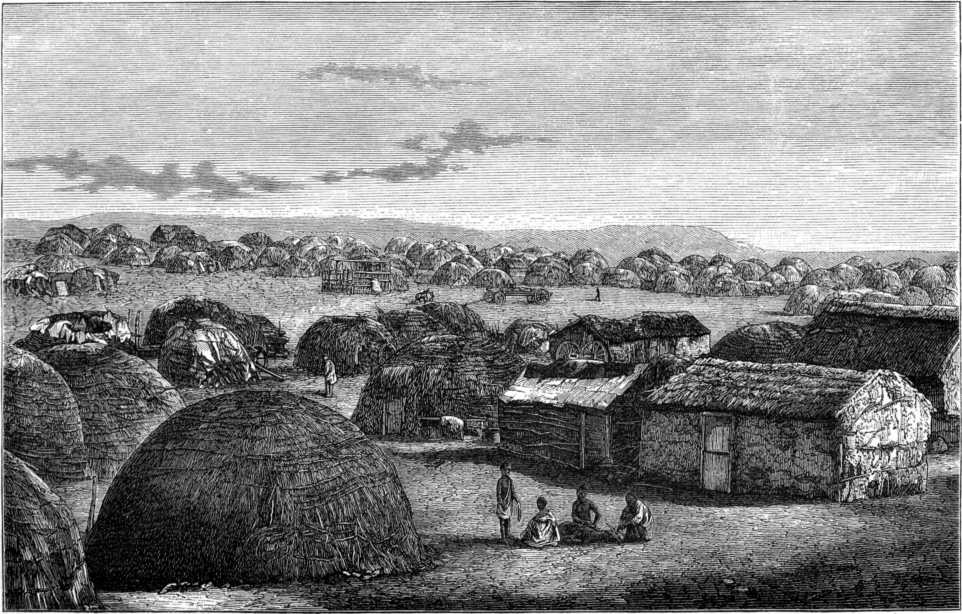 A Mfengu village in the Cape.

Hawkins stayed with Streatfeild and his family at Willow Vale for at least the next six years but, as Streatfeild sadly recalls, Hawkins had become increasingly addicted to the fairly lethal home-distilled fruit brandy known as “Cape Smoke” and his usefulness may well have declined as a result. Streatfeild makes no reference as to when or why Hawkins left his service. Streatfeild returned to England in 1885 (and was presented to the Prince of Wales at a Levee in St. James’s Palace in October) so it is probable that Hawkins returned to the UK with him at that time. Shortly afterwards, Streatfeild was appointed Resident and Civil Commissioner in the district of Kuruman in the newly-annexed Protectorate of British Bechuanaland (a post he held from 1887-89) and it looks as if Hawkins had left his service by that time.

Hawkins next turns up back at his home-town of Wickham in Hampshire, shown in the 1891 Census. He had married the widow Elizabeth Ann Callender in Hampshire in 1886 and their two young children are recorded as born in Wickham in 1887/1888 – so he was clearly back in England around 1885/86. Hawkins and his family occur again in the 1901 census but he died in Wickham in 1907 and nothing else is known about him; his wife lived on to 1926.

Frank Newton Streatfeild was obviously a remarkable, determined and gifted man who, after a number of  career “false starts” found his strengths as a soldier and administrator in South Africa; he died in Hever Cottage, Cookham, near Edenbridge, Kent, in January 1916. But we should also spare a thought for the “ordinary” labourer from Wickham who shared ten years of his life with him in South Africa and ended up with a career interlude that he could never have foreseen! I wonder if he wore his medal around Wickham? He would certainly have been one of very few men in the county who had the South Africa medal with clasp 1877-8 – and the only one who had served with “Streatfeild’s Fingoes” !

Reminiscence of an Old ‘Un is freely available in its entirety online at https://archive.org/details/reminiscencesofo00streiala/page/n7/mode/2up?view=theater.

Streatfeild’s book Kaffirland: A Ten Months’ Campaign on the Ninth Kaffir War is also available online at https://www.google.co.uk/books/edition/Kafirland/NQEwAAAAYAAJ?hl=en&gbpv=1as and as a recent reprint.