A forgotten female composer and musician 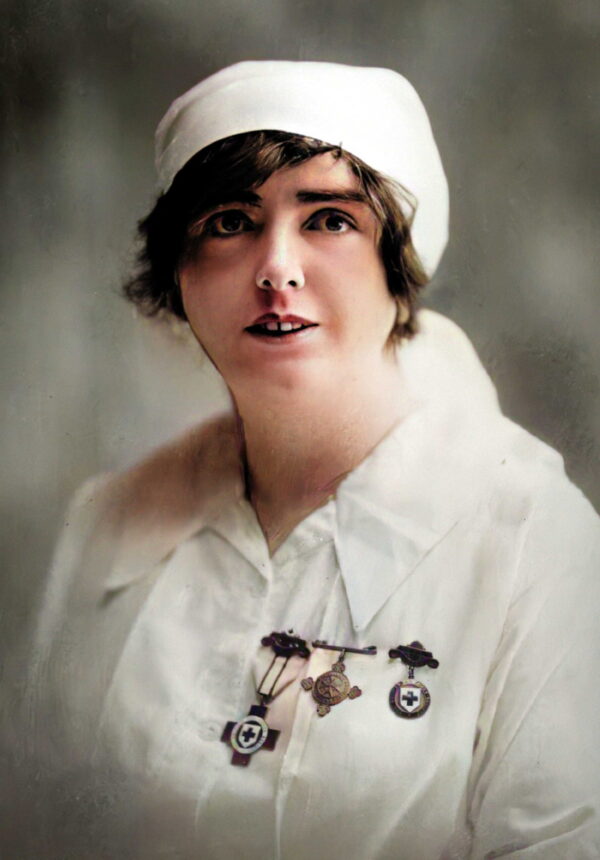 Born in 1884 in Gosforth, Julia Cook Watson (who became Mrs. Julia Chatterton by marriage in 1914) was an accomplished pianist, lyricist, public performer and composer prior to 1914 and an important figure in international folk music in later years. She established the music section of the North British Academy of Arts in Newcastle-upon-Tyne in 1908 and, more significantly, was an early member of the hugely influential Society of Women Musicians, set up in 1911, along with redoubtable female figures of the musical establishment like Ethel Smyth, Elizabeth McConochy, Katharine Eggar and Marion Scott. In these days when female composers and artists in all genres are rightly attracting greater attention, she deserves to be better remembered. 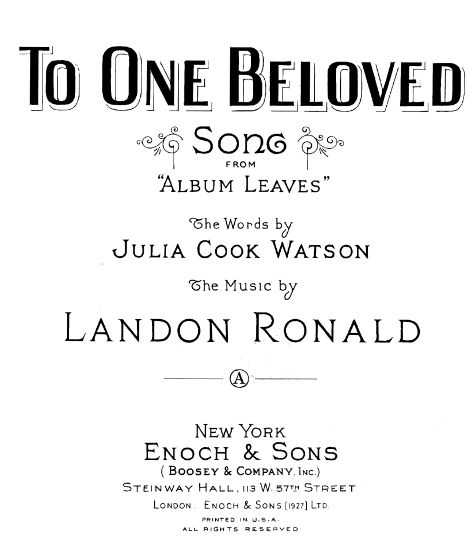 The young Cook Watson built up a fine reputation as a pianist, initially in the north of England and then in London and as an up-and-coming composer, attracting good reviews for her work and publishing, for example, numerous popular parlour songs and piano pieces before the Great War. She was also a regular contributor to a wide range of musical and art newspapers, like The Musical Standard, often under the pen-name Julian Cook – presumably a male persona to ease the possibility of publication. In addition, she wrote poetry and some of her verses were set to music by, amongst others, Sir Landon Ronald and Sir Hubert Parry, who set some of them in his last published set of songs. 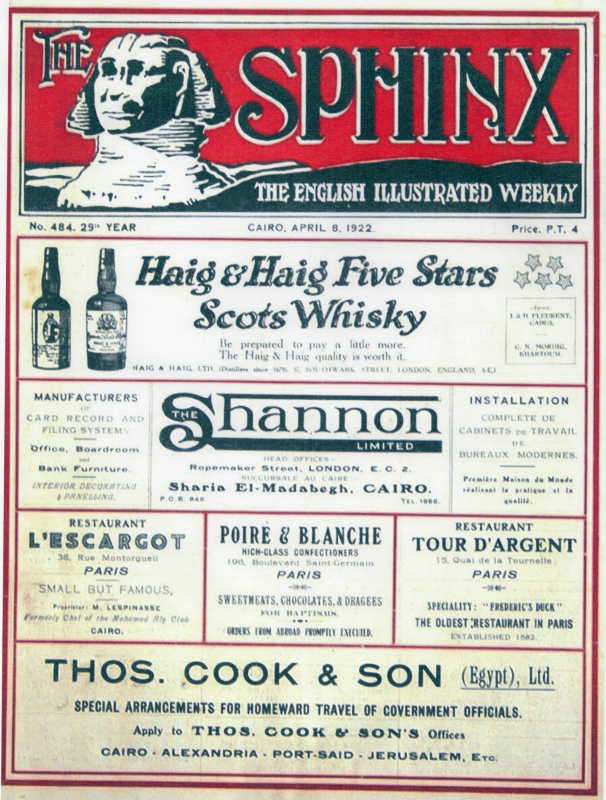 Before 1914, for reasons unknown, she accepted the post as Editor of the “The Sphinx” in Cairo, an ex-patriot newspaper published for the British community living in Egypt. She remained in this post for ten years and during that time married Frederick Chatterton, a respected English architect who was then working in Egypt with the Public Works Department and, like Julia, was doing war work with the Red Cross.

Julia Chatterton, who was already a Red Cross volunteer, threw herself wholeheartedly into VAD and Red Cross work in Egypt from the start of the war working, amongst others, in No. 2 VAD Hospital in Cairo and becoming a Section Leader in 1916. She also worked in kitchen management in a range of other hospitals in Cairo and superintended Red Cross work in the Convalescent Camp set up in the port suburb of Boulaq Dakrour. Not unexpectedly, she involved herself in music and organised concerts for the wounded and for the forces in general and was musical director of “The Cards”, a concert party which performed to convalescents in different Cairo hospitals. She obviously attracted a great deal of notice for the commitment she showed in both nursing and concert work – she was Mentioned in Dispatches by Sir Archibald Murray in January 1918 (“Cairo VAD Detachment”) and in 1919 was appointed M.B.E. 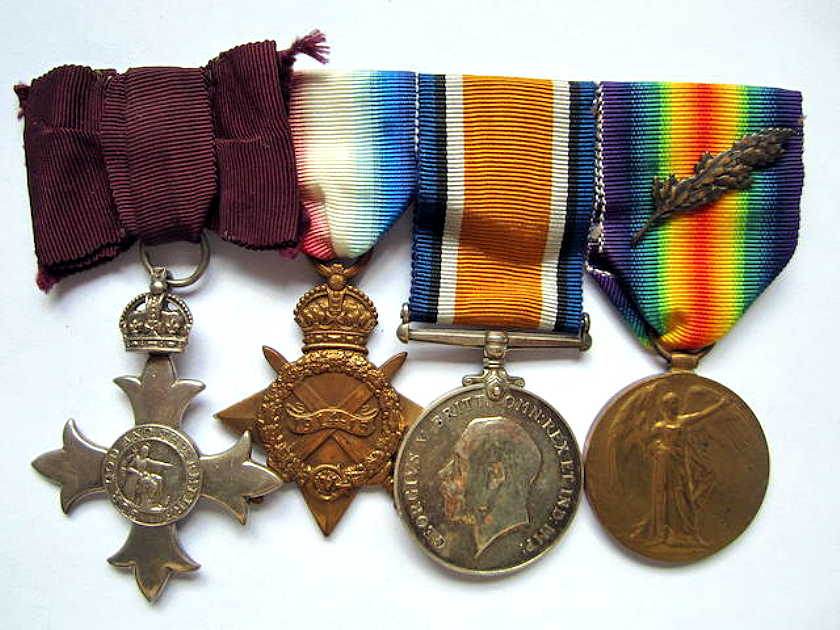 However, it was in the immediate post-war years that Chatterton really committed herself to serious musical projects. In particular, she became fascinated by folk song beyond the UK – an interest she first developed in Egypt, where she heard and copied local music. She founded The International Folk Song and Folk Lore Society and then began what one can only describe as a remarkably bold, adventurous and even dangerous career.

The collecting and recording (by pen and sound) of folk music was very much to the fore just before and just after WW1, with people like Ralph Vaughan Williams, Percy Grainger, Cecil Sharp and many others travelling around Britain listening to and recording “real” or authentic folk music before it finally vanished. Chatterton went much further – she decided to investigate and record the folk music of much more remote and unexplored areas. She began to tour the Balkans – by herself – and visited some very remote areas in Albania, Macedonia, Montenegro and Serbia (then as Yugoslavia) where tourists were by no means common and single travellers (and especially women) were potentially in real danger. Moving from village to village by mule, she listened to and wrote down “on the spot” examples of folk music. 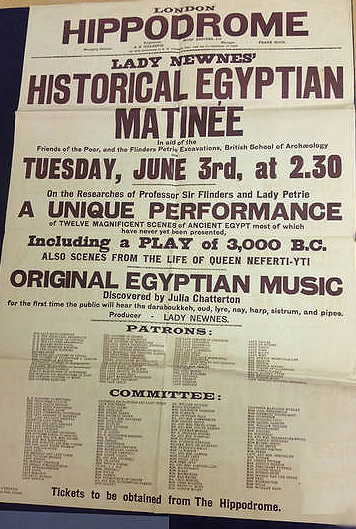 One of Chatterton’s exotic post-war concerts in London

From the Balkans, she moved to even more exotic areas – for a single woman traveller – in Morocco and Algeria. It is reported that she dressed as an Arab woman and “carried a revolver in her belt”! At least she had the advantage, learnt during her years in Egypt, of speaking good Arabic. Again, she listened to the songs and instrumental music performed in their original locations and wrote down her impressions “on the spot” on the music manuscript paper she always carried with her.

She was certainly a brave and determined woman. One report of many in the same vein, recounted that “in the sun-baked hills of north-western Morocco… by mule and pony she zig-zagged from village to village, dressed as an Arab married woman … when the sun goes down and dusk comes, she will sit unobtrusively amongst quaint village gatherings and jot down the songs that are sung – songs that, perhaps, have never been written down before and yet have been sung to the same rhythmical chants through the centuries”. Later, in London, she gave performances of and talks on the music she had collected, illustrating them by playing original instruments she had collected on her travels.

At the same time, when visiting these remote areas of North Africa and Europe (and she also toured – presumably without the revolver! – Spain, Flanders and France, recording ancient Provençal music) she collected a huge range of original musical instruments, “all of which she could play herself”, and gave performances in the UK using what were then very novel instruments producing novel sounds.

Sad to say, all this effort and achievement seems to have come to nothing. Her ambition, as her sister told a reporter, was to build up and publish a huge anthology of international folk music which would no doubt take many more years of work, but her hopes to continue collecting in Japan, China, India and East Africa were never realised. In 1936, at the age of 50, and after returning from another tour of Greece and the Balkans, she died suddenly at her home in Kensington – apparently from complications brought on by recurrent bouts of pneumonia which she had first contracted on service in Egypt. He husband, Frederick Chatterton, had died in 1934.

What became of her large and important collection of songs – she claimed to have amassed over 1,000 – and her impressive collection of folk instruments (“with which her flat is overflowing”) is unknown. They have not been traced in surviving music collections or as gifts or bequests to any such institution and, sadly, it looks very much as if they were simply dispersed or even destroyed, so that just about nothing remains (as far as is known) of Julia Chatterton’s pioneering and demanding work.