Born in Gosport in 1862, Ernest Frederic David was the son of a Major in the Royal Marines. It is no surprise to see, then, that he was commissioned into the RMLI in 1881. Thereafter, he had a most interesting career, as reflected by his medal group which has recently “appeared”, never having been on the market before. 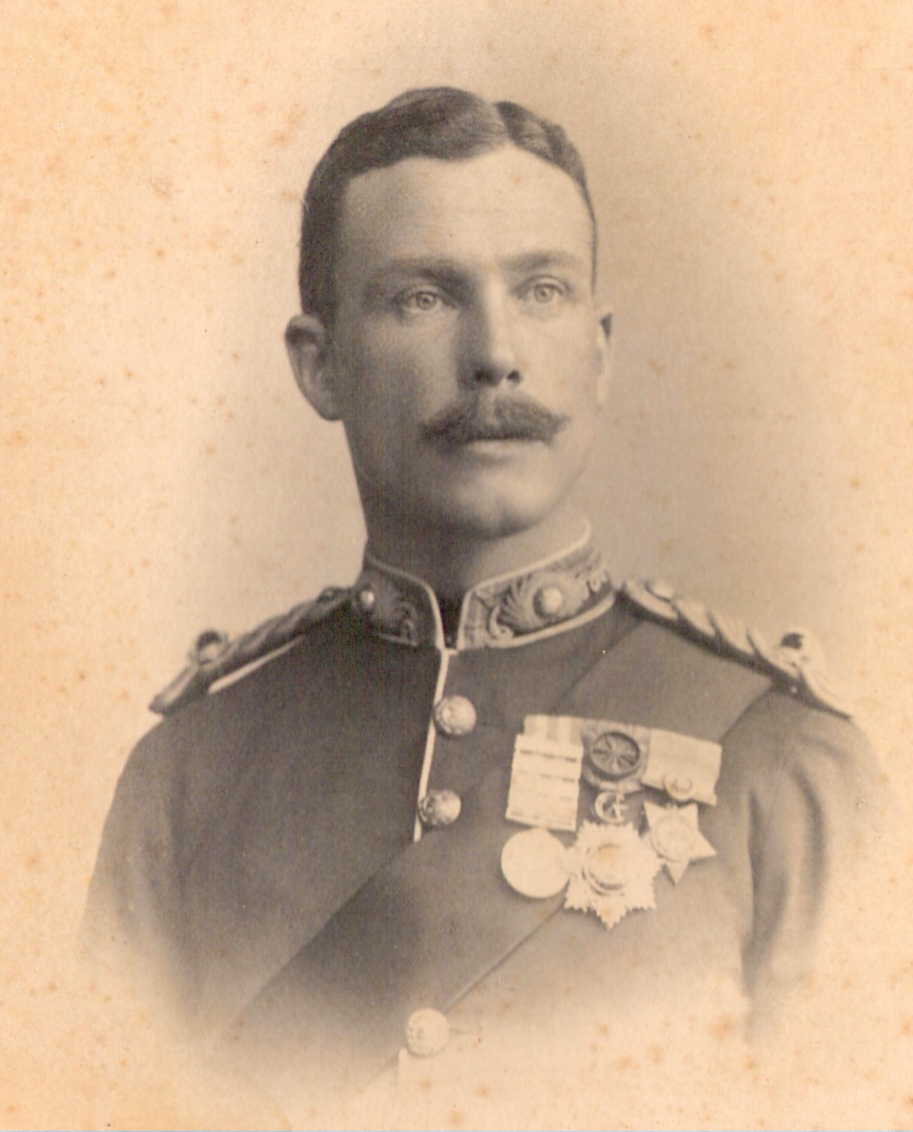 Apart from a brief period at sea as RM officer aboard HMS Orion between 1886-88, David spent his entire career on land, involved in operations in Egypt and the Sudan, and much of the time associated with the newly-formed Sudanese battalions of the rebuilt (post 1882) Egyptian Army. He rose from Lieutenant in 1881 to be second in command of the 10th Sudanese Infantry in 1888 and, remarkably, since he was  still only a substantive RM Captain and Brevet Major, was ranked as Brigadier in commanded of the 4th Brigade of Sudanese infantry in the first stages of Kitchener’s Dongola Campaign in 1896-97. 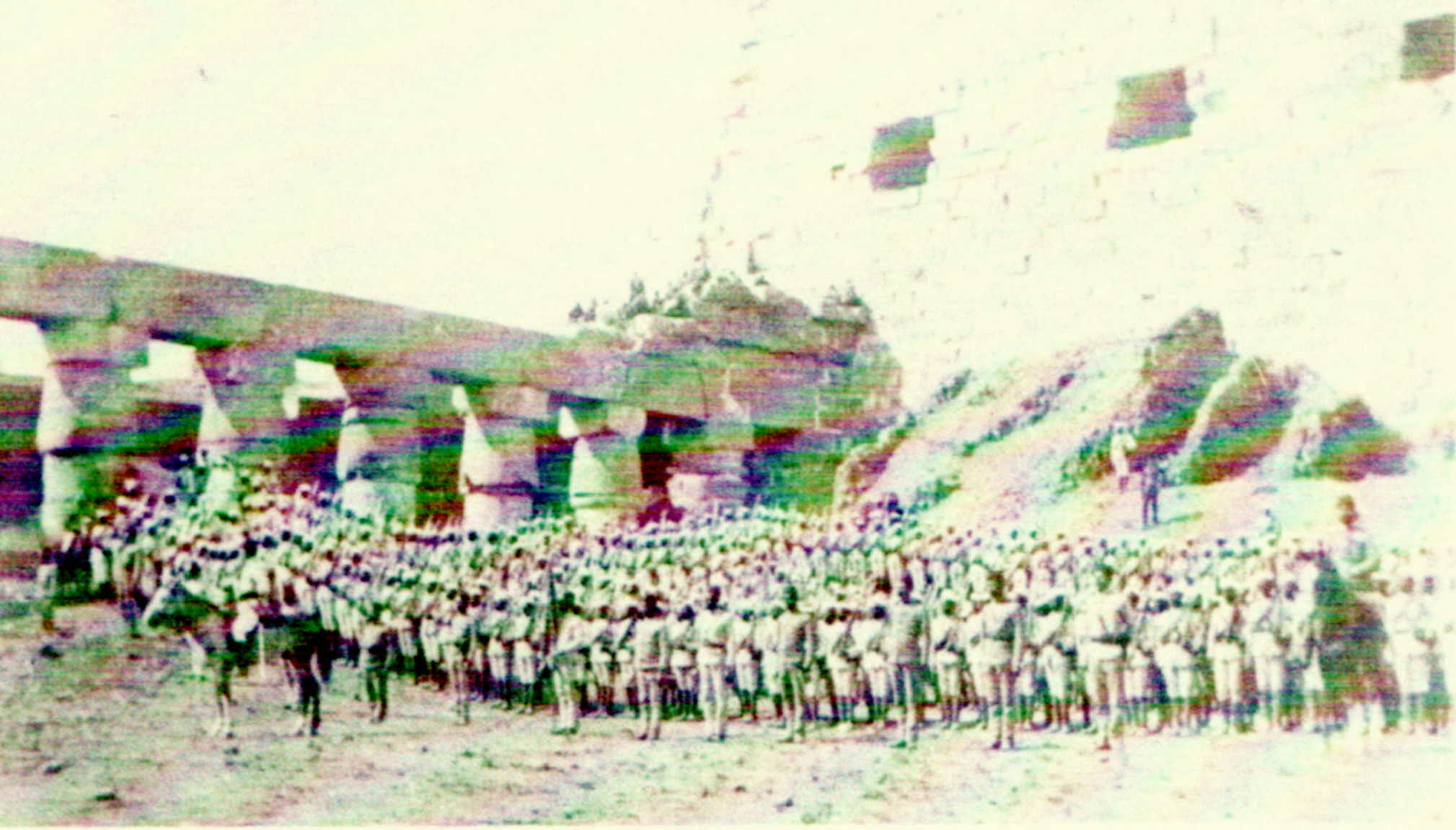 His interesting medal group reflects these years of service in the Sudan. As a young officer, David served in the RM Brigade which was landed at Suakin in the Spring of 1885 to defend the port and operate in the eastern Sudan against the tribal forces of Osman Digna. He took part in several actions as a consequence – at Hasheen on 20th March 1885 and at the major engagement of Tofrek on 22nd March, as well as smaller encounters during these operations. From Suakin, he did his only sizeable stint as a sea-borne RM officer, serving on HMS Orion in the Mediterranean and on the China Station.

But he must have impressed somebody in the Sudan, because in August 1888, still only a Lieutenant, he was posted straight from Orion to the Sudanese infantry and within two months was second in command of the 10th Sudanese. He was almost immediately back at Suakin and with the 10th took part in Sir Francis Grenfell’s offensive against Osman Digna in December 1888. He led the 10th into action at Gemaizah on 20th December, during which action he was one of very few British officers to be wounded. A clasp was awarded for this battle and is, of course, rare to British units – largely the Welsh Regiment, the King’s Own Scottish Borderers and the 20th Hussars – and is now regarded as uncommon. Unfortunately, unlike some other battles in the Sudan – especially Abu Klea – Gemaizah has fallen into the backwaters of history. Few books on the Sudan give it more than a passing reference, but in its day it was seen as an example of the fact that the newly raised and trained Egyptian and Sudanese battalions (albeit “stiffened” on this occasion by British troops) could fight very well. For his service at Gemaizah, David was awarded the 4th Class of the Turkish Order of Medjidieh. 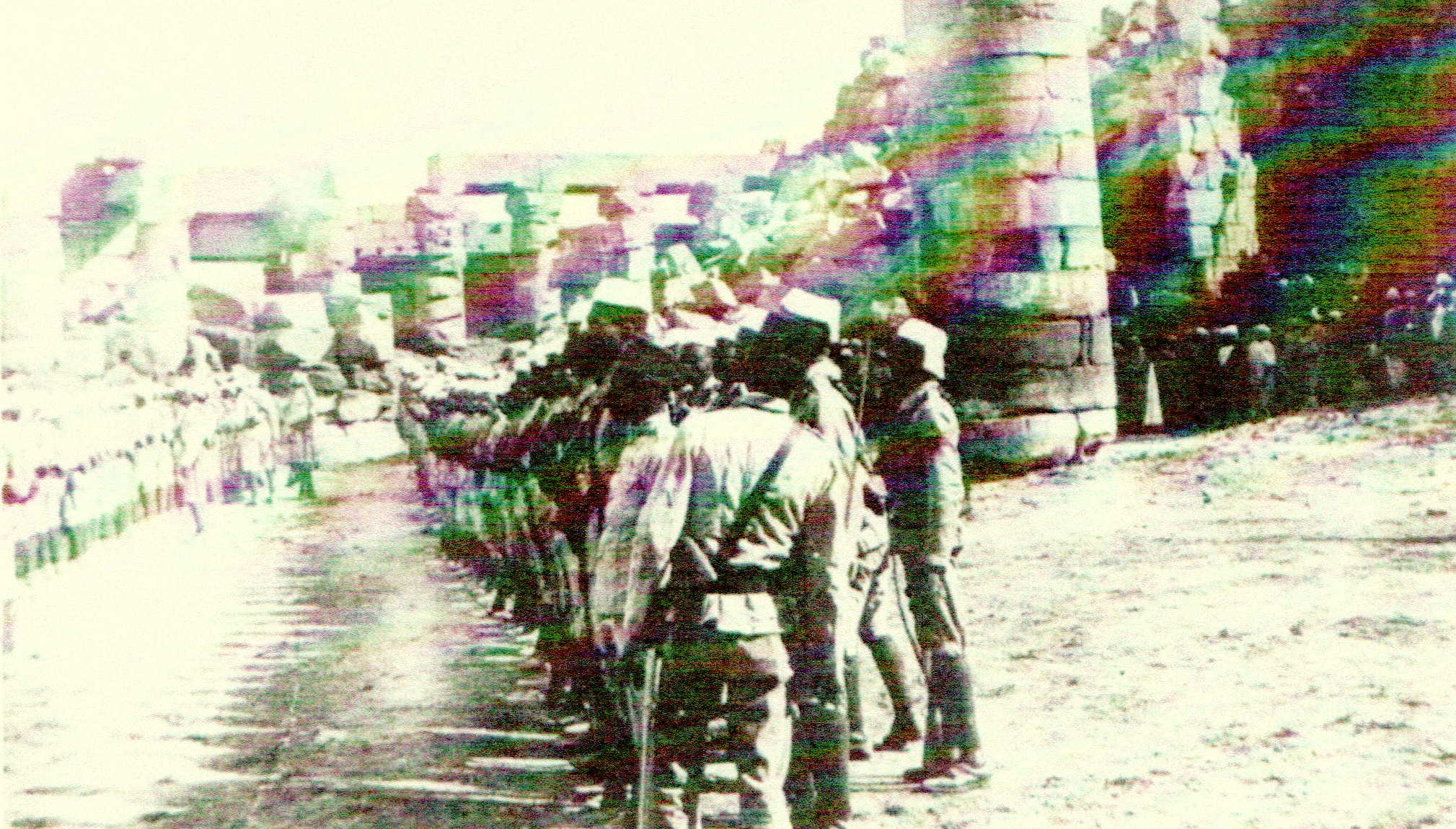 10th Sudanese at Luxor during the campaign

We perhaps tend to think that between the bigger actions for which clasps were awarded – between, say, Tofrek in 1885, Gemaizah in 1888, Toski in 1889 and Tokar in 1891, little happened. Nothing could be further from the truth. As Mahdism spread northwards from the Sudan towards Egypt, there was fairly constant contact and a whole series of engagements. British regiments and Egyptian on garrison duty on the Egyptian frontier around Wadi Halfa (in the Frontier Force) had nothing like a pleasant time of it between 1885-1890. Some of these actions, now largely forgotten and, from the medal collector’s point of view neglected because no clasps were awarded for them, were sizeable and significant victories. Examples are the battles fought at Ginniss on the Egyptian frontier on 30th December 1885 or at Argin on 2nd July 1889 which were major actions. 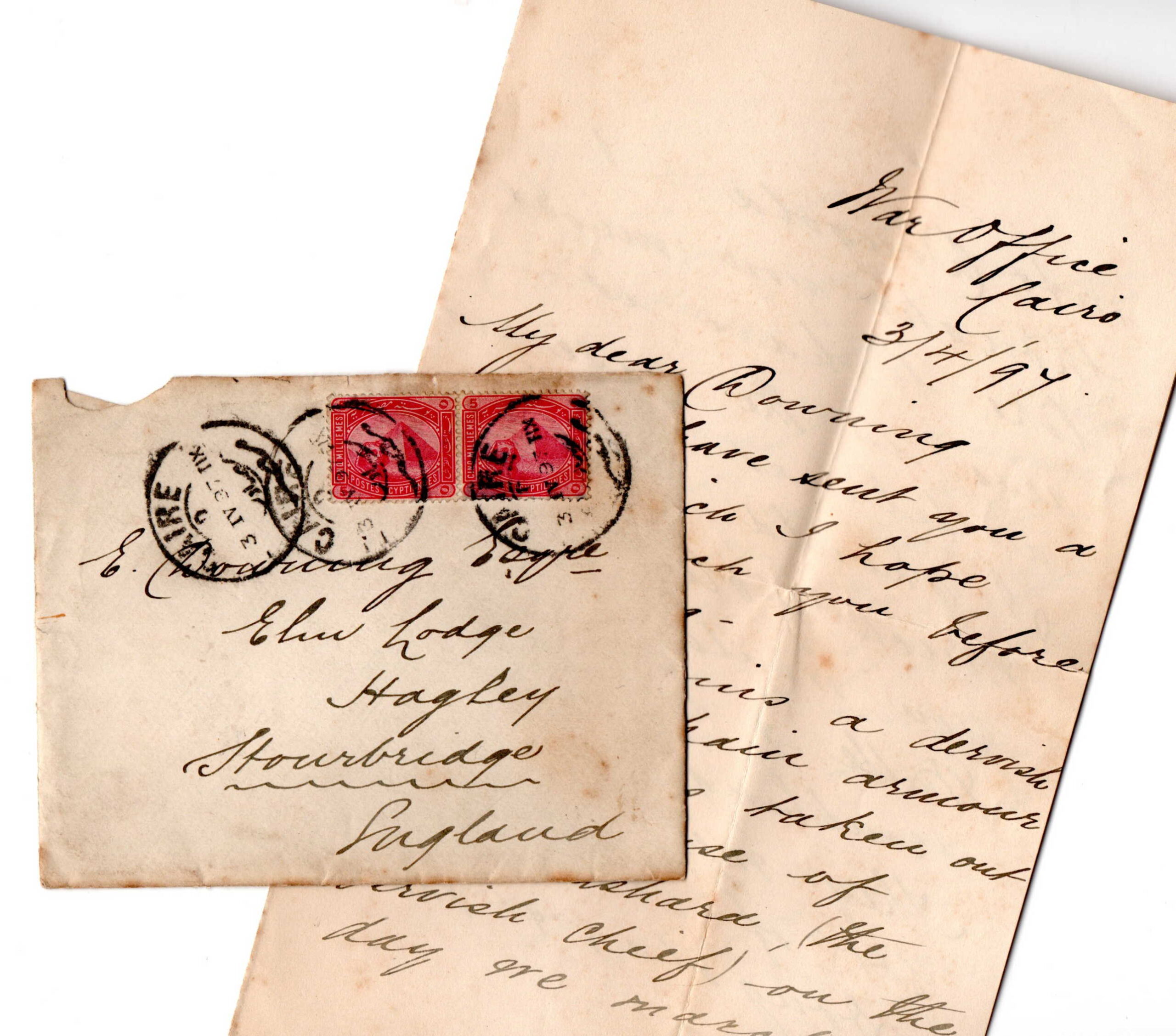 Letter of 1897 – sending a coat of chain mail taken at Dongola!

As a Royal Marines’ officer attached to the Egyptian Army, David was to spend the entire period 1888 to 1897 on the Egyptian frontier, at Suakin or on the Nile, and his few surviving letters from the frontier make it clear that “alarms and excursions” were common, borne on top of the usual discomforts of intense heat, sand and poor rations.

In 1889, David commanded the 10th Sudanese in the highly successful action at Argin on 2nd July and at the major – but equally forgotten – battle of Toski on 3rd August. Here, apart from a squadron of the 20th Hussars, an entirely Egyptian and Sudanese force under Sir Francis Grenfell won a major victory. The clasp awarded for the battle (Toski 1889) is a rare award to a British recipient and David was “mentioned in dispatches” for the battle. 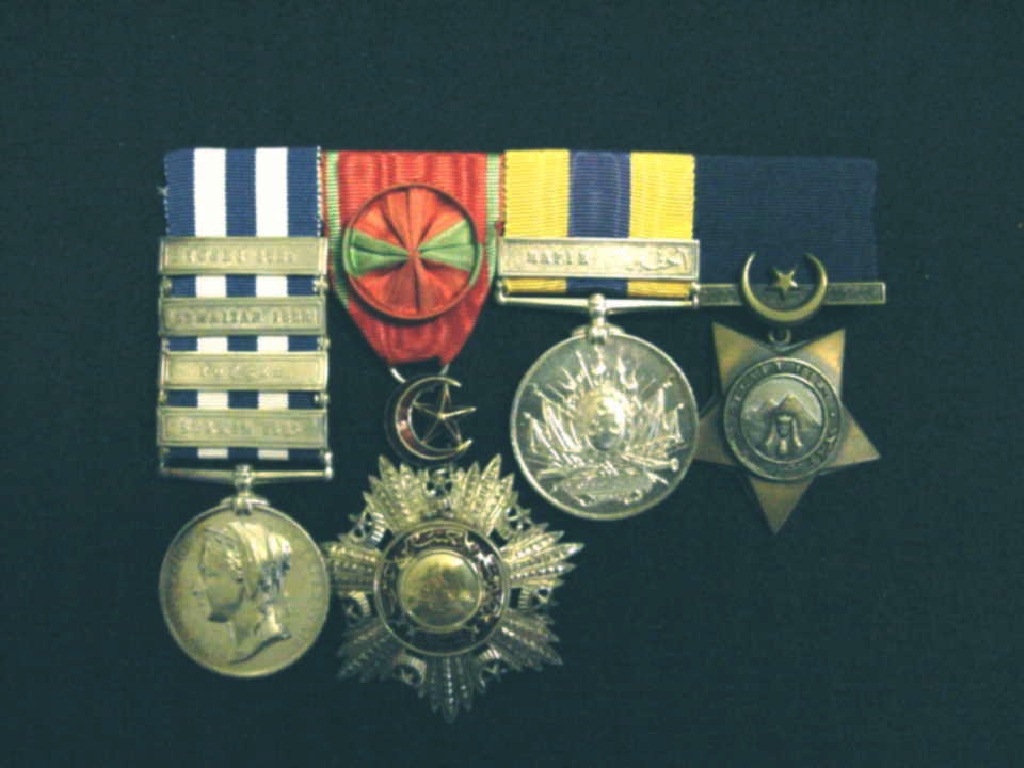 But apart from these larger actions, it was “business as usual” on the frontier. In one letter from Wadi Halfa in January 1892, David refers to receiving “certain news of the Dervishes. I was in bed, rather seedy, but an order came for the Xth [Sudanese] to go out and out we went to a place about half way between Wadi Halfa and Sarras”. After two days of waiting to see where the Dervishes would emerge, David sent his men into action against a party of 500 destroying the railway line and forced them to withdraw. For another two days, Colonel J. Wodehouse, commanding at Wadi Halfa, with a force of cavalry and the Camel Corps pursued these men across the desert and eventually the Camel Corps ran into and engaged the enemy. In the midst of the skirmish, Dervish cavalry charged into the melee, killing the Camel Corps commander, Captain Pyne (formerly of David’s 10th Sudanese) and 47 others; “they cut off Pyne’s head, and those of the men too … we had Pyne’s body brought out and buried near here. I read the service as Col. Wodehouse was too cut up to do so”. These small-scale clashes are frequently recorded by David and remind us that “active service” very much continued on the Egyptian frontier as Dervish forces probed northwards towards Egypt. 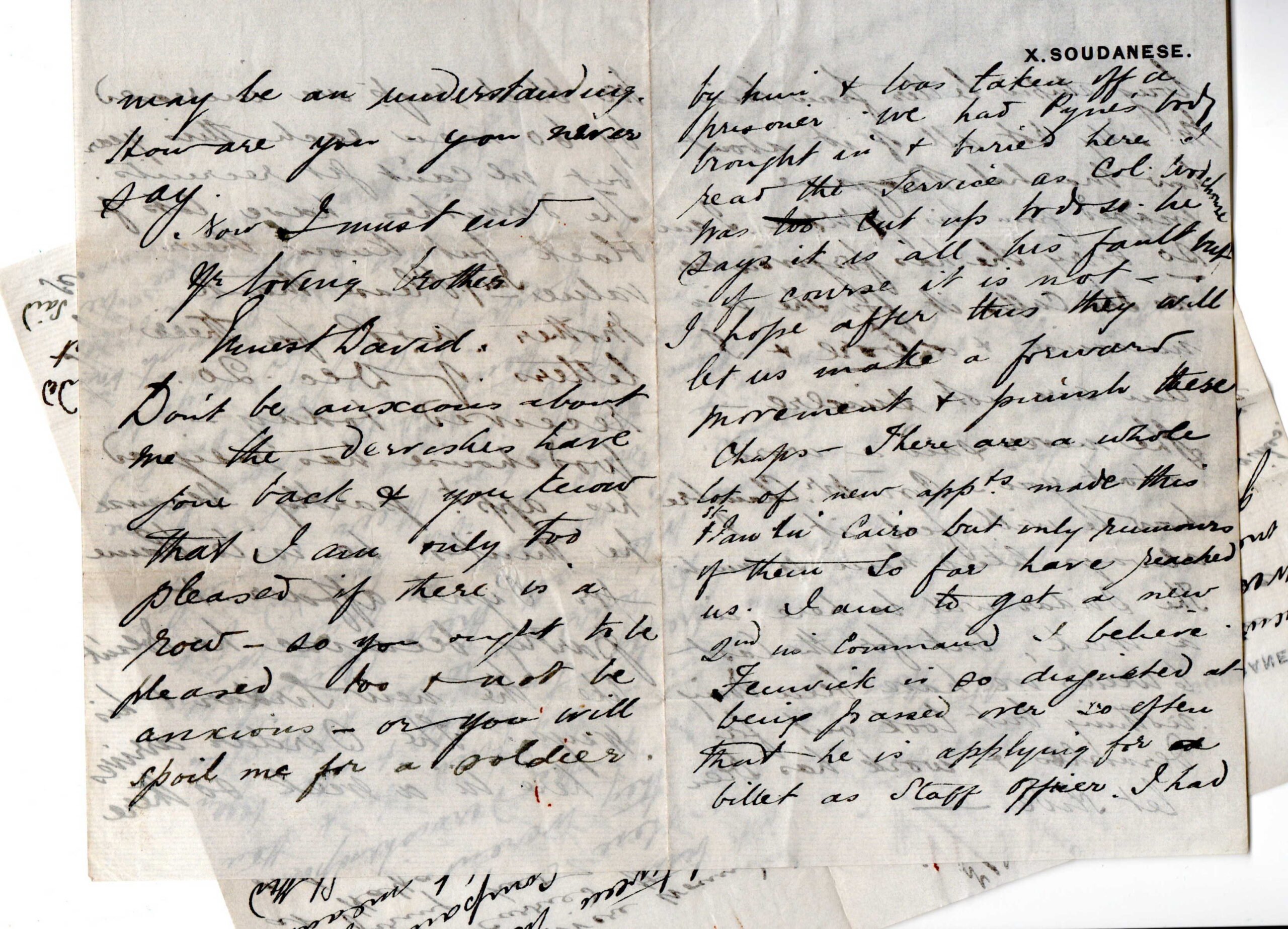 Some of David’s letters from the 10th Sudanese

By this time, 1892, David, though still only a substantive RM Captain and Brevet Major, was actually acting Lieut. Colonel, Egyptian Army, and in command of the 10th Sudanese and continued to serve on the frontier.

In June 1896, Sir Herbert Kitchener began his long-awaited advance from the Egyptian frontier into the Sudan – the Dongola Campaign, which marked the beginning of the Anglo-Egyptian re-conquest of the Sudan over ten years after General Gordon’s death in Khartoum. David was given command of an entire brigade (the 4th, which included his own battalion) of Egyptian and Sudanese troops and led them into the Sudan on the first stage of Kitchener’s carefully-planned advance. On 7 June, David was in command of 4th Brigade during the operations near Firket and later in the advance on and action at Hafir on the Nile, 19th – 26th September. He led his brigade into Dongola – the first objective of Kitchener’s force – on 15 October 1896.

Clearly, at the age of only 34 and effectively a Brigadier General though actually just a Brevet Major, David must have been destined for great things in his military career. However, things unravelled for David very rapidly.

Although he had been “mentioned” again for the advance on Dongola and given the brevet of Lieutenant Colonel, for some unknown reason David was appointed in the summer of 1897 to command Kitchener’s gunboat flotilla forcing its way down the Nile, blocked by a succession of difficult rapids and cataracts. Why a man who had spent so long in a successful “infantry role” should suddenly have been switched to command a riverboat flotilla is not at all clear – apart from the fact that he was a Royal Marines’ officer.

A rare combination of clasps to a Royal Marine!

Winston Churchill, in his detailed account “The River War” explains what happened in some detail. In August 1897, David was trying to get the two gunboats El Teb and Tamaai over the treacherous Fourth Cataract, far down the Nile, east of Merowi. The boats were, of course, moving against the current, which was immensely strong over the rocks and rapids. The usual process was to haul them, with their engines at full power, using steel hawsers and hundreds of Egyptian labourers and simply manhandle them over the cataracts by physical strength. Tamaai was dragged up to the rapids, but simply could not be pulled across. Her bows were forced sideways by the sheer pressure of the current and she pulled away from her ropes and hauliers and was forced back downstream. 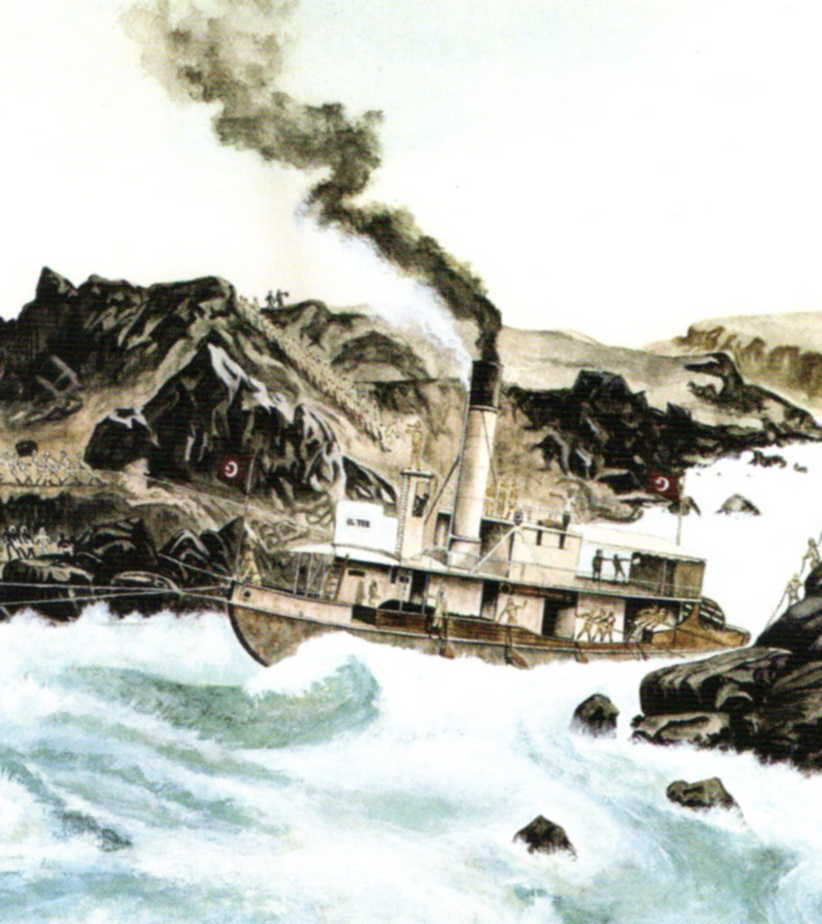 Gunboat “El Teb” coming to grief in the Cataracts.

El Teb was next to try. The same thing happened, except that El Teb, under Captain David Beatty, RN, (at the beginning of his illustrious career) was turned so violently by the force of water that she became swamped, capsized and turned over. Beatty and his Egyptian crew were pitched into the Nile and swept away, to be rescued downstream by Tamaai; they were lucky that only one man drowned. El Teb would not be re-floated and back in action for months.

By all accounts, Kitchener was furious at the loss of the gunboat and gave full vent to his rage against Lt. Col. David, whom he blamed for the loss. He was replaced on the spot as commander of the gunboat flotilla by Captain Keppel (commander of Tamaai) and was refused any interview with Kitchener. Several times, Lt. Col. David requested to see “K” to put his case and explain what had happened, but each time was refused.

Instead, Kitchener appointed David to the command at Debbeh, a town on the Nile, west of Korti. It may sound that being given command of a staging post for Kitchener’s advance down the Nile was no insult, but few people were in any doubt that it was meant as a demotion and a slight. Debbeh was a muddy, dusty “nowhere” – an numerous war correspondents who passed through testified. Indeed, one biographer of Kitchener has gone as far as to say that the loss of the gunboat and his dispatch to Debbeh was the cause of David’s sudden death – he “went off his head” at Debbeh and had to be sent back to the UK, where he soon died.

Whatever the truth of Kitchener’s attitude and its effects, the end was very swift. David returned to the UK in December 1897 a very ill man. On the 8th August 1898, he died at his family home in Sevenoaks. His death certificate records not that he “went off his head” at Debbeh, but that he was killed by a brain tumour, which (it records) he had had for ten months.

Lt. Col. David was buried in Chatham after a full-scale military funeral and a fine memorial plaque set up to his memory in Rochester Cathedral. It records his “distinguished service in the Soudan 1884-85 and with the Egyptian Army 1888-1897” and stands next to the plaque in memory of J.R.M. Chard, VC. 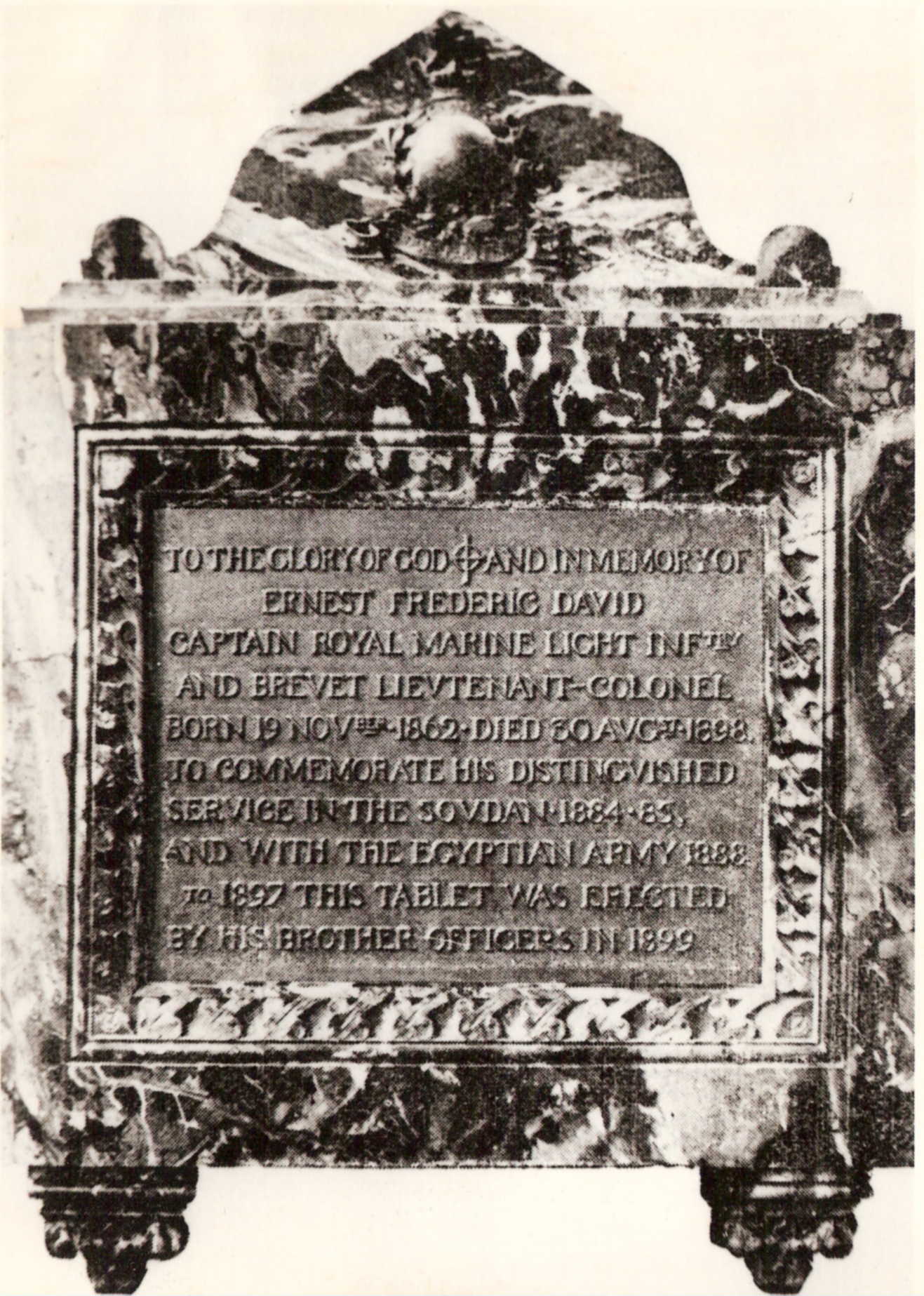 Lt. Col. David’s medal group is an interesting combination. He has the undated Egypt medal with clasps Suakin 1885, Tofrek, Gemaizah 1888 and Toski 1889 – which must be an exceptionally rare combination to a Royal Marines’ officer. He also has the Khedive’s Star dated 1884-86 and the 4th Class Medjidieh conferred upon him for distinguished service at Gemaizah.

What is interesting is what he does not have – he did not receive the British medal for the Sudan 1896-98. He was undoubtedly entitled to it, but his name is not on any RM or Egyptian Army roll so far found. Similarly, his Khedive’s Sudan Medal has the early single clasp Hafir but should also carry Abu Hamed and Sudan 1897. It looks very much as if no one put him forward for the British medal – not authorised until March 1899 – or later Sudan clasps. Since he died in August 1898, he seems to have simply dropped from the records. Nevertheless, what remains of David’s service in the form of his medal group is testimony to a short but brilliant career, blighted at an early stage and ended suddenly by death.