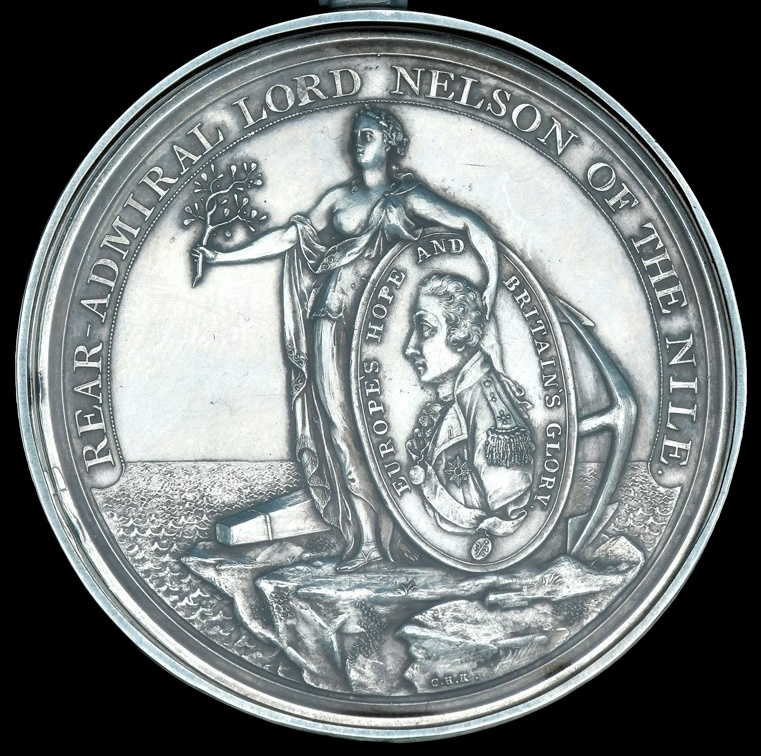 Nelson’s destruction of the French fleet anchored off the north coast of Egypt at Aboukir Bay on 1st August 1798 was one of those audacious and highly successful Royal Navy operations in an era of great naval actions. The climax of a cat-and-mouse pursuit through the Mediterranean in the summer of 1798, the battle effectively isolated French forces invading Egypt and cut their supply line; it was celebrated around Europe as a major victory in the war against the ideals of the French Revolution and effectively ended Napoleonic dreams of an oriental empire.

As early as 1795, reflecting naval actions against the French since 1793, the government instituted the Naval Gold Medal, a beautiful award given as a large medal (51mm dia.) to Admirals or as a smaller medal (38mm) to Captains and other officers who had distinguished themselves in action. The first were awarded for ‘the Glorious First of June’ action in 1794 and 13 were conferred for the battle of the Nile – all of the smaller type, with the exception of that to Nelson, who as a Rear Admiral, received the larger version. The medals, in solid gold, were contained in glass lunettes, the ribbon being white with wide edge stripes of dark blue. Needless to say, examples of any of these awards are extremely rare and very expensive.

The Naval Gold Medal, obverse. The reverse names the action and the recipient.

The European significance of the victory is well reflected in the fact that almost immediately a medal was proposed as an award to all those who had participated in the action. At that time the official award of general campaign medals as not at all the norm; the East India Company had just begun that process with its own medals to Indian soldiers for the Deccan and Mysore campaigns, 1779-92 but the British authorities did not follow suit until Waterloo in 1815.

In the meantime, as was very much the way with medals in the C18th, it was left to individual initiative to propose, produce and award a campaign medal for the Nile in 1798. In this case, the medal was paid for by Mr. Alexander Davison (1750-1829) who, apart from being a merchant and factory owner, was at that time involved in naval supply and was Nelson’s Prize Agent. Being a Prize Agent involved assessing and selling off captured naval “prizes” – which could be anything from major enemy warships (which were often bought by the government if in useable condition), to small trading vessels and their cargoes – and distributing the proceeds to the government and amongst the officers and men involved. It stands to reason that the Prize Agent in control of a major “haul” of prizes stood to make a great deal of money on his own account and Davison spent some of his considerable profits in the manufacture of a special medal.

“Davison’s Medal for the Nile” was awarded in various qualities of metal to reflect the rank and status of the recipient – a typical class distinction common to that era. Medals in “bronzed copper” were given to the ratings, in copper gilt to Petty Officers, in silver to officers below the rank of Captain and in gold to Admirals and Captains. Some examples were given as special marks of esteem to distinguished recipients, such as King George III.

The large medal (48mm diameter) was designed by the well-known medallist Conrad Heinrich Küchler (c. 1740-1810) who was the principal designer at Matthew Boulton’s Soho Mint in Birmingham, where the medals were produced. The obverse showed a figure of Hope standing on a rock by the sea, proffering an olive branch, and supporting a shield bearing the half-length profile of Nelson with the legend “Europe’s Hope and Britain’s Glory” with “Rear Admiral Lord Nelson of the Nile” around the upper edge of the design. The reverse shows a fine and detailed depiction of the two fleets about to come to action, with the legend “Almighty God has Blessed His Majesty’s Arms” and in the exergue “Victory of the Nile August 1. 1798”. To perpetuate the fact of his philanthropy (and advertise himself!), Davison had “A Tribute of Regard from Alexr. Davison Esqr. St. James’s Square” engraved around the rim of each medal.

The medals are by no means hard to find on the market and the basic bronze type, given its age and significance, is relatively inexpensive. The gilt bronze, silver and gold versions are correspondingly rarer and more costly.

The medals are sometimes seen mounted for wear with various types of suspension, rings and swivels, and often worn from a navy blue ribbon, but this is unofficial. Examples which are named to their recipient are much more valuable, depending on the rank of the recipient and the ship, but care has to be taken to ensure that the naming style (entirely unofficial) is appropriate to the age and contemporary to the award and not a later addition. The names can be verified from the original ship’s musters. 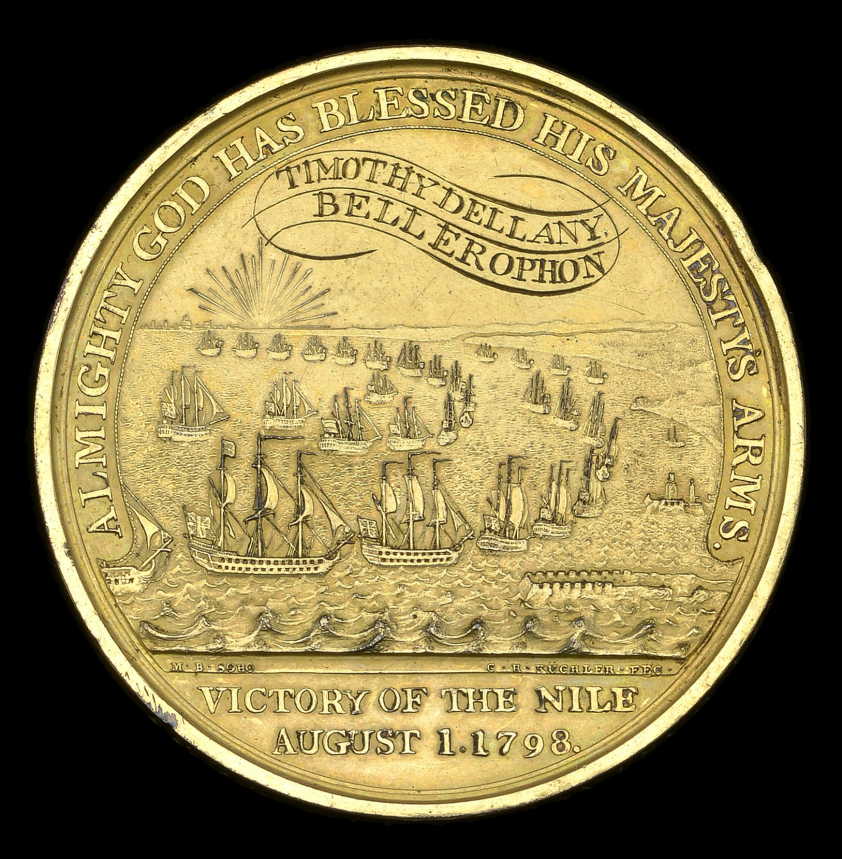 Those recipients who were lucky enough to live into old age had to wait until 1848 (i.e. about 50 years!) to receive an official award for the battle. This took the form of the Naval General Service Medal (NGS), one of the retrospective awards, along with the Military General Service Medal and slightly later, the Army of India Medal established to reward service in the French Revolutionary and Napoleonic Wars and contemporary Indian campaigns. By 1847-50 these were already slipping into the historical past!

The NGS obverse bore the William Wyon profile of the young Queen, above the date ‘1848’, with the titles VICTORIA REGINA. The reverse has a very elegant – and much admired – design, also by William Wyon, which shows Britannia holding a trident and riding on a mythological sea-horse or hippocampus. The ribbon was white with narrow dark blue edges and the medal was issued named but without rank (other than for senior NCOs and officers) or without ship details; only the medal roll can establish which ship the recipient served aboard during the action. 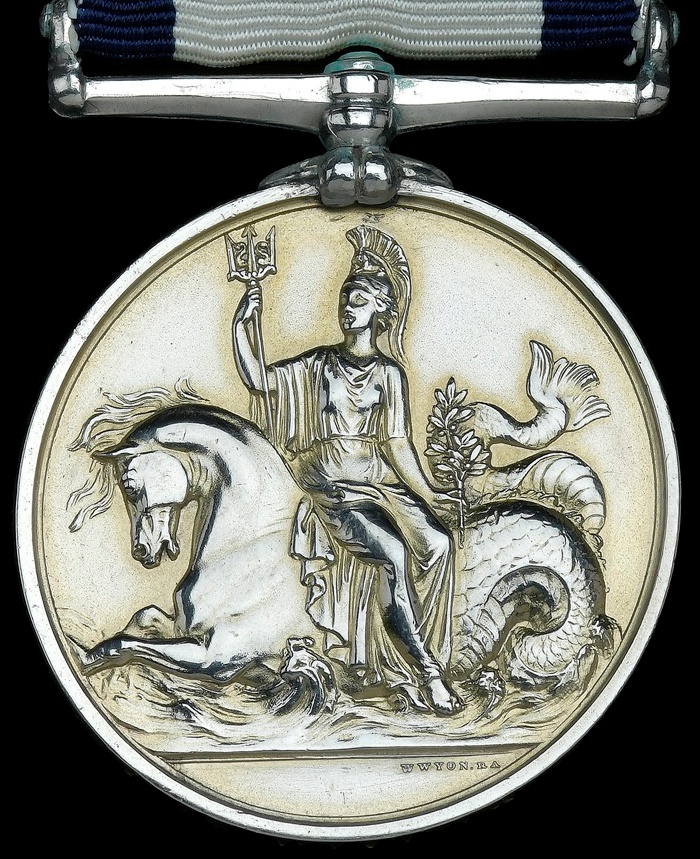 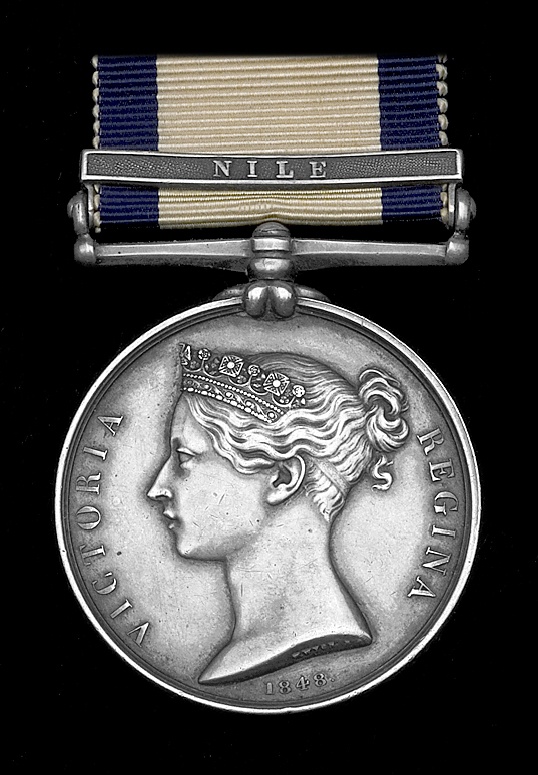 The clasp awarded for Nelson’s action in 1798 was Nile, one of the remarkable number of 232 different clasps awarded with the NGS. Only 326 men survived to claim it, with recipients representing 16 ships, ranging from the largest like Nelson’s flagship Vanguard to smaller warships and sloops. The largest number to any one ship went to HMS Alexander with six officers and 30 ratings claiming the medal, while on Nelson’s own ship six officers and 21 men received the award. The smallest number of awards went to the sloop Minerva with just one officer and five men claiming the medal and clasp.

In an battle as ferocious as that at Aboukir Bay, all the ships played their part, with the exception of the unfortunate Culloden which ran aground before the action and remained a helpless spectator, well out of range. Nevertheless, 32 of her crew were awarded the medal and clasp in 1848.

The NGS with the clasp Nile is not at all common, even though its award numbers are greater than for many other NGS clasps. Examples to ratings fetch from £3,500-4,000 but of course those to officers, recipients of distinction or those with multiple clasps can fetch very high prices.