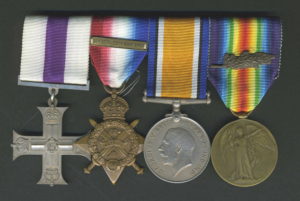 Prior to “the Great War” it had long been the custom to “mention” in official reports and dispatches from the battlefield the names those officers and men who had especially distinguished themselves in the campaign or an action. Generally speaking – especially prior to the mid 19C – it was mainly officers who were “mentioned” and there was no visible indication of the fact, apart from a reference in the officer’s “War Services” and in his official record; similarly Other Ranks who were specially mentioned had nothing to show for it other than a reference to it in their service record. Sometimes, a “mention” brought with it a step in rank (often Brevet rank for officers) or, occasionally, for Other Ranks the “mention” could be the prelude to the award of a gallantry medal (like the Distinguished Conduct Medal) if the circumstances were deemed of sufficient merit. Sometimes, the dispatch actually went into detail on the reason for the “mention” (i.e. outlining what the recipient had actually done to merit special reference) and where the action or incident was considered worthy of general notice, the main dispatches and the names of those “mentioned” were published in the London Gazette, the Edinburgh Gazette or similar official publications across the Empire, like the Gazette of India. Of course, not all dispatches from a particular campaign or action were formally published and some campaigns are better covered than others in terms of public announcement. 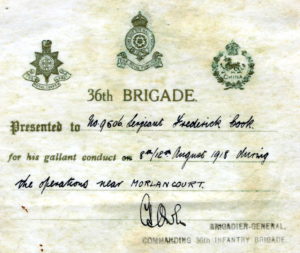 As with other gallantry matters, the size and scale of the First World War forced a change in this situation. In some cases, army, divisional, brigade or unit commanders had produced their own paper awards in the form of “gallantry cards” and similar certificates to record the fact that an individual had been “noticed” for some gallant or worthy deed. But this was rather ad hoc; not all commanders or units produced them and they still did not confer a nationally-recognised or visible award. But so many officers, men and women of all services and in all theatres were performing worthy, gallant or meritorious deeds that it was felt necessary to formally recognise those whose names had been “brought to notice” by various commanders. 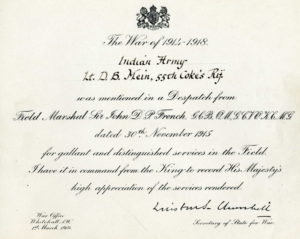 The initial result of official consideration of these matters was the institution in May 1919 of the “Mentioned in Dispatches Certificate”, which recorded the King’s “High Appreciation” of the services rendered by the named individual. However, this paper award was still not considered sufficient as a reward, since it conferred no visible distinction. As a result, in 1920 a distinctive Mentioned in Dispatches Emblem was introduced. It took the form of a spray of oakleaves in bronze, its award made retrospective to 4th August 1914. Unlike the practice in some other European countries, in the British system only one emblem could be worn and only in bronze, no matter how many times the individual had been “mentioned”. It has to be said that the emblem is not very striking – but at least it did publicly show that an individual’s good service had received official recognition. 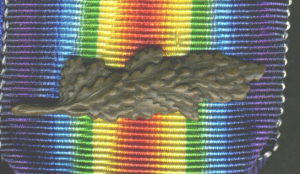 The first MID emblem – a spray of oak leaves in bronze

In terms of WW1 awards, it was originally intended that the emblem would be worn only on the ribbon of the Victory Medal but it was later (though not formally until 1947) authorised to be worn on the ribbon of the British War Medal if the recipient had not qualified for the Victory Medal (e.g. as awarded singly for garrison service in India) or, if no medals at all had been awarded, simply worn on the tunic or jacket above the left pocket. 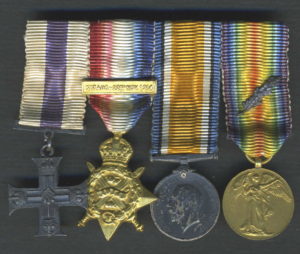 The emblem was awarded in two sizes – a larger version 13/8″ wide for wear on the medal itself when worn – and a smaller type at 1″ wide for wear on the ribbon bar when ribbons alone were being worn. Some have bendable arms on the reverse to attach them to the ribbon, while others have holes pierced into them so that they can be stitched onto the ribbon. Very small versions were privately made for wear on miniature awards. Slight design variations can be found in the emblem, which presumably reflects manufacture by different producers at different times.

Some 141,000 MID emblems were conferred up to 1920 (including post-war operations in, for example, Russia, Kurdistan and Iraq) – which is actually not that many considering the scale of the Great War; compare this with approx. 122,000 awards of the Military Medal. Certainly, MIDs to Other Ranks are rarer than many people tend to think. 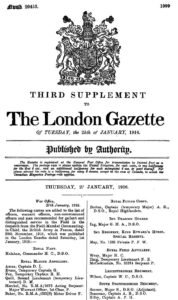 MiDs are announced in The London Gazette. 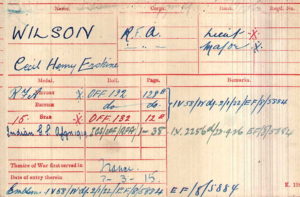 Medal Index Card with “emblems” showing the award of an MID.

Generally speaking, apart from reference in the London Gazette or similar, the fact of an army award was shown on the recipient’s Medal Index Card, with the word “Emblems” or an abbreviation of it, to show the issue of the oakleaves, but this is not always the case – some MICs do not reflect the award of the MID emblem, so it is always worth checking the London Gazette if the there is any suggestion that the recipient may have been entitled. There are also separate “MID Cards” for some recipients. These and MICs are available on some online genealogy sites, like Ancestry.co.uk. It is interesting to note that, as with other official awards, the emblem could be subject to forfeiture, though again this was not formalised until 1947.

The practice of awarding the MID emblem has continued since the end of WW1 – reduced in 1947 to a single bronze oakleaf for awards after August 1920 and to a silver oakleaf following the award system reforms of 1993.