A Purser at War : the career of John Speed RN

The Naval General Service Medal (1847) to Purser John Speed recently appeared for sale on the London auction market. What was striking about it was the fact that it bore two clasps – Egypt and Syria – that were separated in time by 39 years; if this represented one man’s naval career it would be a truly remarkable thing. But as it so often happens in the world of medal collecting and research the story was more complicated than it seemed at first. 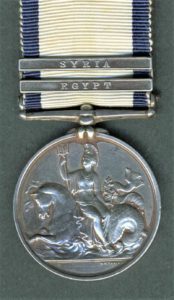 In the Royal Navy of the late 18C the ship’s Purser was the man responsible for providing the “victuals” aboard a warship – seeing that the ship was fully provisioned before she sailed and during the voyage – and supplying the “slops” (clothes of an official pattern) which the men might purchase as extra or replacement clothing drawn against their pay, as well as a range of other necessities. It stands to reason that a good, efficient Purser could make a great deal of difference to the quality of life aboard ship. The Purser could also make a certain income “on the side” by selling “extras” and luxuries to the crew on his own account, so could greatly increase his income and with diligence and attention become wealthy from the job over a period of time. The Purser also had the arduous task of working out and accounting for the wages of the crew and along with the Captain signed off the wage lists – in fact accountancy was a major part of his work and the Navy required increasingly detailed and complex paperwork returns on all sorts of matters to do with the ship’s stores and pay in a determined attempt to prevent corruption. All this does not necessarily mean that Pursers were simply “desk pilots” – there are plenty of accounts of Pursers alongside the other sea officers being seriously involved in naval actions, landing parties, cutting-out expeditions and such like. 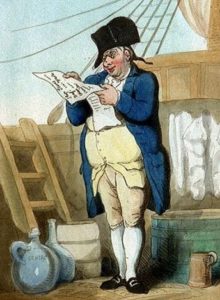 A ship’s purser of the late C18th – not a flattering view!

In the late 18C Pursers were traditionally classed as “Warrant Officers” but actually belonged to that class of non-executive officer who were regarded as “gentlemen” – like their naval equals the Surgeons and Chaplains (all of whom might be well-educated and thus later entrants into the service in terms of their age) and certainly not on a par with the “lower class” of Warrant Officers like carpenters, boatswains and gunners who invariably came up from the ranks. From 1787 they could wear a distinctive uniform but it was not until 1807 that Pursers were officially rated as Officers and allowed – crucially for their status as a “gentleman” – to carry a sword. Later in the 19C they were termed “Paymasters” in the Royal Navy and the term “Purser” was retained only in the merchant service.

The subject of this article, Purser John Speed, was born in Castle Carey in Somerset in 1777 and came from a large family of that name in the area; some later adopted the additional surname “Andrews” so that John Speed sometimes occurs in later accounts as “John Speed Andrews”; his eldest son, also John, became a Naval Purser and Paymaster in his turn. Speed senior joined the Royal Navy apparently as a seaman in 1796, progressing quickly to Captain’s Clerk and then Acting Purser, which implies at least a certain degree of education and intelligence. He first served at sea aboard HMS Swiftsure and received his “passing certificate” as Purser in 1803 – fairly rapid promotion which brought his pay to a majestic £4.10 shillings per month. With the exception of a period ashore during the short-lived Peace of Amiens in 1802-3, after which he joined the Suffisante and then the Hind in the Mediterranean, he seems to have had almost constant service at sea from 1796 until the (apparent) end of the French Wars in 1814, when he, like so many others, found himself paid off when a major reduction of the navy took place. This was nevertheless after 20 years’ service – almost a full career in itself. 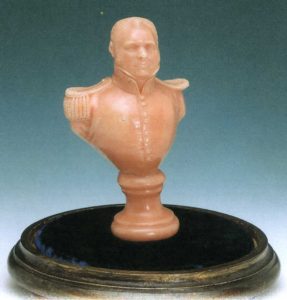 Speed was a Clerk aboard the famous Renown, 74-gun flagship of Sir John Borlase Warren, for the Egypt campaign of 1801 and also served during those operations on the Florentina. He seems to have been somewhat unlucky in his choice of ships during his long career – though he was able to see interesting service around the world during his career off the Americas, in the Caribbean, around the Cape and in the Mediterranean amongst others. He was twice shipwrecked – once on the Suffisante, wrecked in Cork harbour in December 1803 and again on HMS Statira which sank after hitting unmarked rocks off Cuba in February 1815.

However, Speed’s greatest experience must have been as Purser of the Macedonian. This was a fine, new 38-gun frigate, regarded as something of a “crack” ship, launched in 1809 and in 1812 under the command of Captain John Surnam Carden. By this time Britain and the US were approaching war, though it did not stop Carden fraternising with the locals in Norfolk, Virginia, during one mission – where one of his frequent dinner guests was the American naval commander Stephen Decatur. In September 1812, Macedonian was ordered to escort an East Indiaman as far as Madeira and then cruise in search of prizes for as long as supplies held. Leaving Madeira on 22nd October, Macedonian had only been at sea for three days when near Cape Henry she had the misfortune to run into the American frigate USS United States, commanded by none other than Stephen Decatur.

The United States, sister-ship to the famous Constitution, was one of the “large” US frigates, mounting 44 guns, with a broadside capability of 864 pounds of metal shot to the Macedonian’s 528. In any close-fought ship-to-ship action Macedonian was likely to fare badly. In a typically brief but vicious action, when the United States’ heavier guns, fired at twice the rate of the Macedonian’s, pounded the Macedonian, she was rapidly reduced to little more than a wreck; her only real chance would have been to get away quickly – which Carden never dreamed of doing – or keep at long range and try to destroy the upper works of United States, which Carden appears to have attempted since most of the damage to the American ship was to her masts and rigging; there was hardly any damage to her hull. Unfortunately, the heavy fire from the American ship almost immediately dismasted the Macedonian completely and left her as a more or less helpless, riddled hulk. With 104 men killed and wounded in minutes – out of a crew of only 301 – and his ship helpless, Carden had little choice but to strike his colours and surrender.

The ship and crew, only the second British warship captured by the US navy at this stage, was taken to New London, where United States was treated to a rapturous welcome having the very unlikely sight of a captured British frigate in tow. In March 1813 Carden and those of the crew who did not abscond or volunteer to join the US navy (and some did!) were shipped to Bermuda for transport home on parole and in May a Court Martial was held on the Captain and the officers, including Speed as Purser. 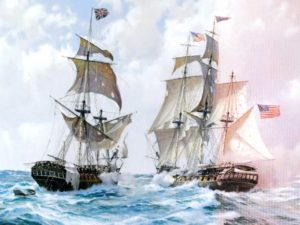 Purser Speed had an interesting time as a result of the action. What he actually did during the brief fire-fight is unknown, but when the ship was captured he was released by order of Commander Decatur, to return to Europe aboard an American vessel bound for Cadiz, carrying dispatches and the news of the disaster. This ship was intercepted by the Benjamin and took Speed to Bristol. The first official account of the action and loss was of course widely circulated and caused shock and outrage in Britain; as one newspaper put it, it gave the lie to Britain’s much-vaunted claim to mastery at sea at a time when the public was used to hearing of naval victories (against the French) not defeats by countries hardly recognised as naval powers. It was equally galling that the Macedonian was then added under the same name to the US fleet, serving with some distinction for many years after.

The Court of Enquiry exonerated the Captain, officers and crew – and names Speed amongst them – finding that the Macedonian had been overwhelmed by greater fire-power and “was unable to bring the United States to close action until she had received material damage”; they recorded that no blame for the loss could be attributed to the officers and crew “who in every instance throughout the action behaved with the firmest and most determined courage, resolution and coolness and that the colours of the Macedonian were not struck until she was unable to make further resistance”. Remarkably, a detailed first-hand account of the last cruise of the Macedonian and the action was written by one of the crew, Samuel Leech, in his A Voice from the Main Deck. He records that when it was all over many men broke into the Purser’s stores and stole his stocks of clothes, whilst others headed for the spirit locker! 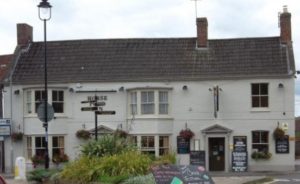 The Horse Pond Inn, Castle Carey – run by Speed for over 20 years

Speed returned to the sea, serving on a variety of ships until the peace of 1814 inaugurated the post-war reduction in the Royal Navy. Remarkably, Speed then abandoned the sea altogether for fully 21 years, when he ran his family pub (which he eventually inherited), the Britannia Inn at Castle Carey, now still surviving as The Horse Pond Inn, and fathered a large family via two wives. Then, for some unexplained reason, in the mid-1830s he expressed a desire to return to naval service – and it says something about him or the state of naval service in those days that after 21 years’ absence from the sea and the complexities of his former naval appointment, he was indeed taken back in the rank of Purser in 1836. 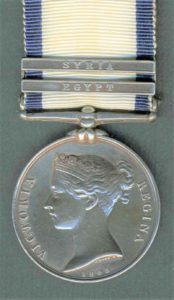 He was appointed to the great 84-gun Asia, serving aboard her from 1836-41 and taking part in the operations in the eastern Mediterranean which would earn him the Syria clasp and the Turkish St Jean d’Acre medal in silver; his final active service came in the Mediterranean aboard HMS Queen between 1845-49. But he continued to seek sea service even after that; his last “survey” as Purser and Paymaster came as late as 1852, when he was 74 years old! This records that he was “fit and desirous to serve” and “though he has a cataract in his right eye he is otherwise in good health and considers himself fit for the performance of his duties.” In the event – perhaps unsurprisingly – he was not recalled to service but spent his last days in Stonehouse, Devon, where he died in Caroline Place on 25th January 1859, aged 81. Notices of death appeared in The Morning Chronicle and The London Standard. His Naval General Service medal remains as a testimony to a remarkable and varied naval career.