All collectors know that “purchase on a whim” moment. I had long wanted to have a Crimean War DCM group – simply because the Distinguished Conduct Medal was the first official British gallantry award to Other Ranks; it really would be a matter of just “ticking a box”. While at a London auction (to buy something else entirely) my colleague pointed out amongst the next lots was a Crimean War DCM group, so why not buy that one as your example? And I did just that; along came the lot, and I bought it. No thought involved; another box ticked. 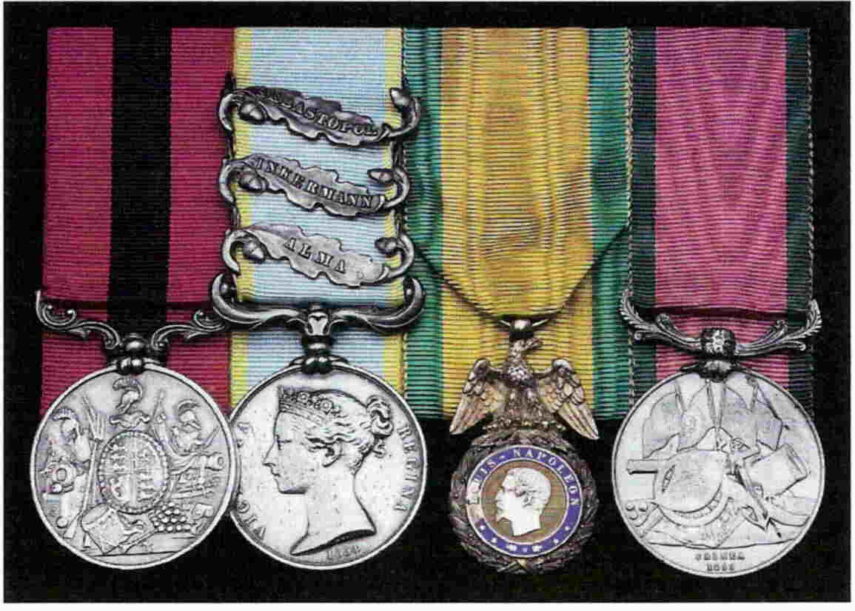 The group was rather nice – a DCM, the Crimean War medal with clasps Alma, Inkermann and Sebastopol, the Turkish Crimea and, just to add spice to the whole thing, the French Medaille Militaire. As I had bought the group just as “an example” and not typical of what I actually collect, I really didn’t expect to do much with it, but of course went through the motions of initial research.

The group was that of Colour Sergt. Philip Read of the 33rd Duke of Wellington’s or West Riding Regiment. I was lucky that his papers survived in series WO.97 at Kew, but remarkably enough they made no mention at all of his DCM or the French award. They did relate that he was a what you might call a typical Victorian soldier – a stocking weaver, born in Broughton Astley near Lutterworth in 1830, who enlisted in the 33rd in 1847 and was discharged on the ground of wounds in 1856. He rose to Sergeant in six years – not bad for those days.

The Crimea casualty roll confirmed that Read was severely wounded in the right leg in the last great assault on Sebastopol on 8th September 1855 and that ended his military career – at that stage. 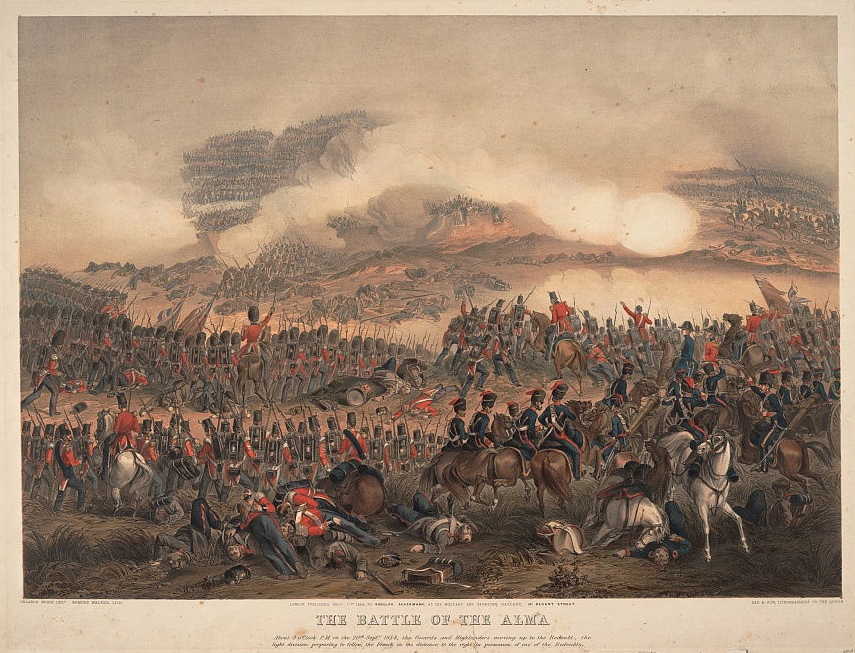 The Alma – the 33rd lost more men here than any other regt.

The DCM, as is common for those days, had no surviving citation but was recommended on 9th February 1855 – a very early date, given that the DCM was not instituted until December 1854. This clearly indicated an award in 1854 and since the 33rd was heavily engaged at the Alma and Inkermann, it could have been for either of those major battles or some other isolated incident. I didn’t think I’d ever find out. The French award carried a brief citation: that Read had served throughout the campaign, had volunteered to go with the regiment on 8th September 1855 at the attack on the Redan and was severely wounded in the action.

And I really thought “that was that” and that Read would simply vanish back into the mists of time. But sometimes pure coincidence comes to one’s assistance. I happened to be reading F. J. Furnivall’s account of the formation of the Working Men’s College in London – one of the first adult education colleges and one of many Victorian philanthropic establishments intending to help educate “the working classes” and those who wanted to “better themselves”. Founded in 1854 in 31, Red Lion Square by Christian Socialists to provide “a liberal education for skilled artisans”, it offered courses on all sorts of things from the basics, like reading, writing and arithmetic, to drawing, maths, geology, philosophy, languages, art. etc and was staffed and supported, voluntarily, by some of the most distinguished writers and artists of the day – like the artist Dante Gabriel Rossetti, Thomas Hughes (author of Tom Brown’s Schooldays), the philologist and scholar F. J. Furnivall, the art historian and philosopher John Ruskin, the philosopher John Stuart Mill and Charles Kingsley, (author of The Water-Babies); volunteer tutors later included G. M. Trevelyan, E. M. Forster, G.B. Shaw and many others.

In 1859, when the whole country went through a French invasion scare and new Volunteer Rifle companies were being founded just about everywhere, it was proposed that the Working Men’s College itself should raise its own Volunteer company. 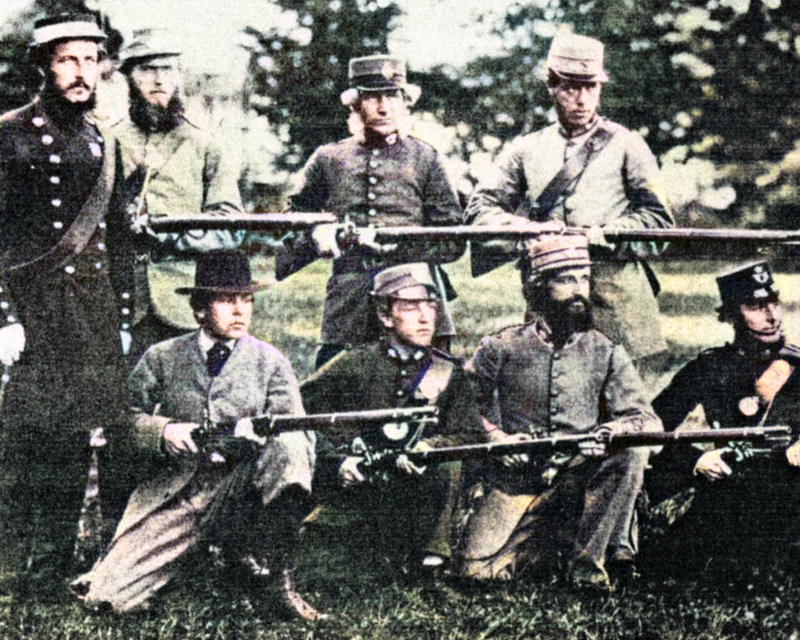 “Imagine my surprise” when I read the following in F. J. Furnivall’s account; talking of the raising of a college company and needing some sort of military personnel to help drill and train the men, he related:

“When I told my grammar class what we meant to do, and asked its members to join our corps, a quiet member at the back, whom I had only then seen, said : “I shall be glad to give you any help I can, Mr. Furnivall.” I answered, “Thanks Read, but do you know anything about soldiering?”. “Rather”, he replied, “I was wounded outside the Redan and was a Sergeant Major in the Foot when I was invalided”. So we all clustered around Read after class and made him the hero of the College. We always cut and buttered his bread at tea and paid for it and would, any of us, have blacked his boots with pleasure”.

It turns out that, through the efforts of his former officers of the 33rd, Read had been found a position as a Clerk in the Lord Chamberlain’s Dept. based at Buckingam Palace when he was forced to quit the army in 1856; the Queen herself had specified that, if possible, a Crimean veteran should be found to fill the position. Clearly feeling the need to improve his educational qualifications (which were probably few), he enrolled in the college in 1857.

The new Working Men’s College Rifle Volunteer Company was soon raised by 1860 and Furnivall continues :
“We got…our Colonel to insist on Read’s being made Adjutant of our regiment, [designated] the 19th Middlesex Rifle Volunteers and as our friend, Lord Goderich (now Marquis of Ripon) was then Under-Secretary at War, we got Read appointed – the only Adjutant of Volunteers ever taken from the ranks and made Captain….A right good fellow was Philip Read, a capital driller and teacher and untiringly zealous in his work. We all looked up to him…”. 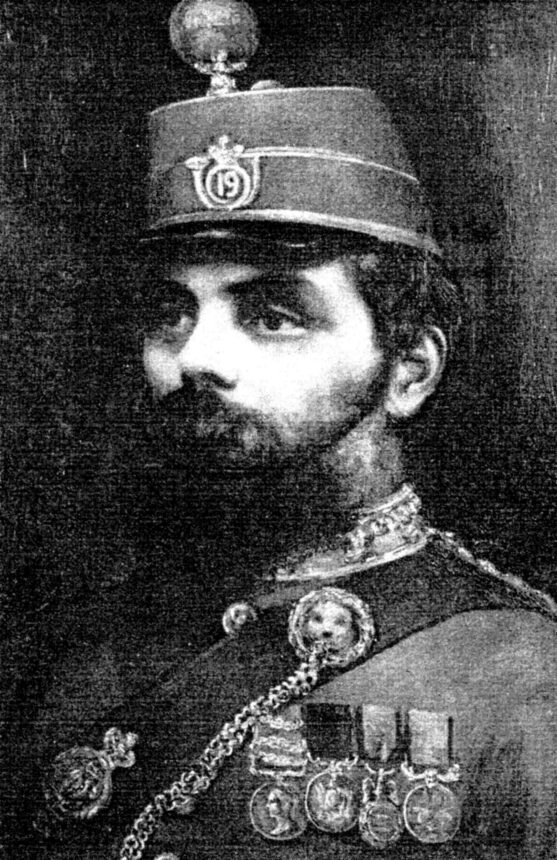 Read as Adjutant of the 19th Middx. Rifle Vols.

The company was first commanded by Thomas Hughes, author of Tom Brown’s Schooldays, who remembered Read with great affection. The London Gazette of 26th October 1860 duly recorded: “Commission signed by the Queen : 19th Middlesex Rifle Volunteers : Philip Read, Gent., to be Adjutant from 6th September 1860”. Notifcation of his rank as Captain duly followed. What an impressive turn of fate for a wounded ex-soldier; I doubt if he ever considered that he would end up as a Captain and a “Gent.” – and so soon – and it surely made him very proud to see this personal entry in the London Gazette!

To cut a long story short, Read remained Captain (and later Major) and Adjutant of the college company of the 19th Middlesex Rifle Volunteers (later part of the 1st Vol. Battn. of the Royal Fusiliers) until retirement in February 1885. “Beloved by all” he had given another quarter of a century of devoted and zealous service, which was recorded with admiration and affection by all who knew him. He really was the administrative back-bone of his corps and responsible in a major way for their oustanding record as a Volunteer unit. Read was to receive retrospectively one of the first Volunteer Officers’ Decorations (VD) when the award was instituted in 1892. 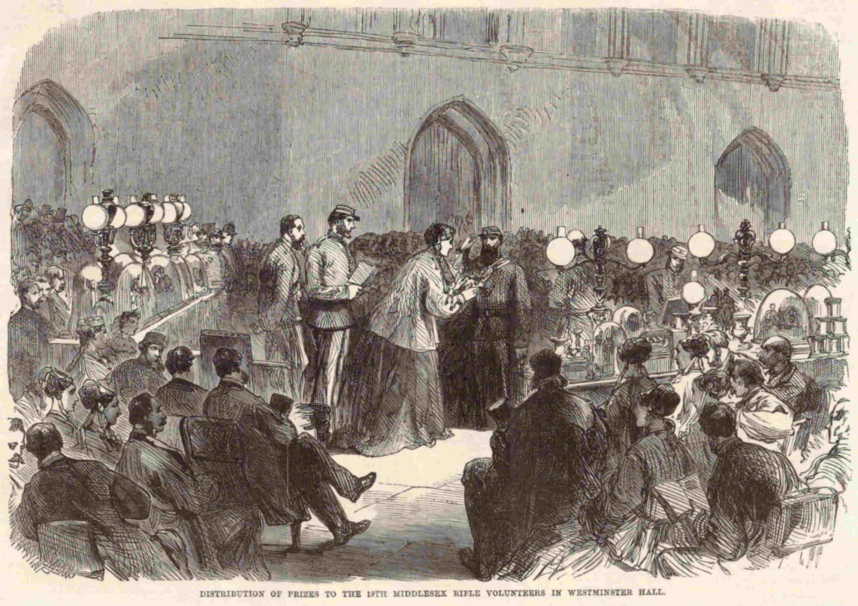 And once again the story may have ended there – adding another twenty-five years’ Volunteer service to the Crimea veteran’s career and taking his story up to 1885. But once again, chance brought further information.

In due course Read married a Leicestershire girl and had a family and, again thanks to the good will of former officers and friends, his four sons were educated at St. Saviour’s College, Ardingly. Tragically, all of his sons died very young of TB, leaving only his daughter Louise after his wife’s death in 1896. Censuses showed that Read originally lived in Bulganak Cottage off Fernham Rd. in Thornton Heath, Croydon. The name was of course significant – Read named his house after a river in the Crimea that would have been well-known to Crimean veterans. There is a whole street now called Bulganak Road and there is evidence to suggest that Read was involved in developing the area; he later lived in a larger Victorian house in that road, now gone, and then nearby at 39, Parchmore Road.

Since I knew that Read lived in Croydon, I wrote to the library there on the off chance that they might have something about him – you never know. To my amazement, the staff there turned up a whole booklet about him. Apparently, Read was a well-known character, much involved in local affairs in later life and in 1907 he was visited and interviewed by the historian Alfred C. Jonas. The results were published in instalments in The Croydon Guardian and finally compiled as a separate booklet entitled An Unassunming Crimean Veteran : Major Read, Thornton Heath. 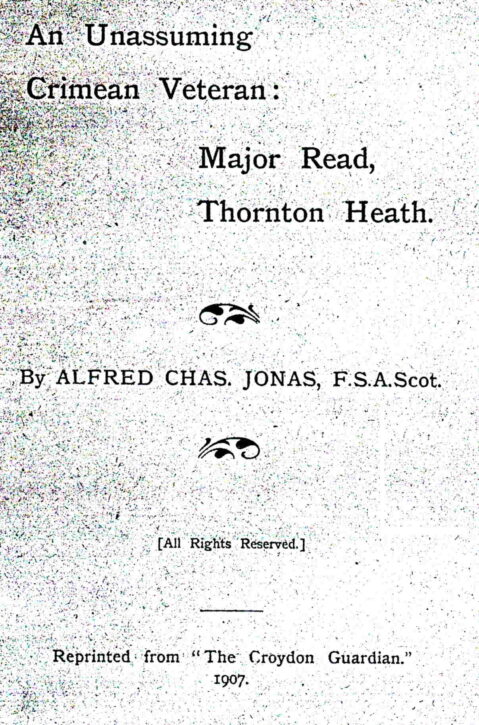 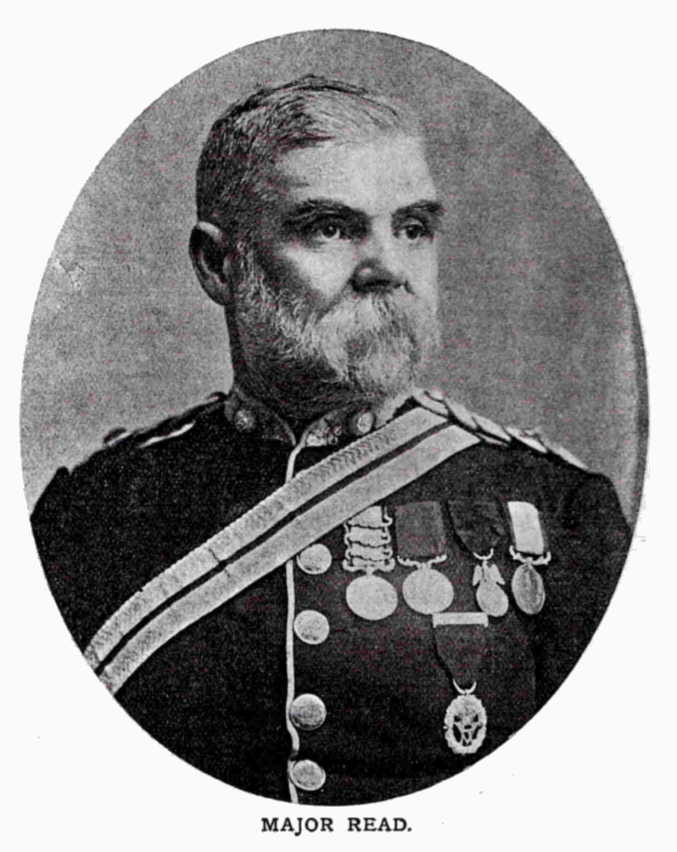 Here was Read’s own version of his entire career in the army and the most detailed account a collector could wish for of his Crimea service. It is no doubt embellished in places by the sort of thing he probably expected his readers to want: was he really treated by Florence Nightingale when he was wounded ? But, from the medal collector’s point of view, this personal account is a mine of detailed information, unavailable anywhere else, on one “ordinary” soldier’s experiences right through the Crimean War. Space precludes any great detail here, but Read’s gives a good account of the 33rd going off to war, landing in the Crimea and fighting on the Alma and at Inkermann. More to the point with regard to his medals, it makes clear what he did during the ferocious “soldiers’ battle” of Inkermann on 5th Nov. 1854 and confirms that this is where he actually won his DCM.

But amongst a lot of fascinating detail, the part I liked most was his account of the prelude to the great attack on the Redan on 8th Septembr 1855, which throws an interesting and perhaps unexpected light on the personal relationships between officers and their NCOs.

Read relates that :
“An incident occurred when on our way down to the advanced trenches. A field hospital had been established in [a] sheltered spot, where the dead were buried. While waiting for the order to commence the attack, an order was brought for each regiment to detail a sergeant for the hospital…to see that all the bearers’ parties returned to the front after depositing the wounded at the hospital. When the order came, I was talking to our Sergeant Major, our Colonel T. B. Gough, the Adjutant George Townshend and Willis, my Captain. The Sergt. Major, no doubt with the best intentions, ordered me to that duty; I flatly refused, saying that I had been in every brush with my company and, wearing the medal I did [i.e. his DCM], I hoped to be at the crowning triumph in Sebastopol with my regiment. The Captain called me a silly young fool; the Colonel laughed and told the Sergt. Major to send another Sergeant.”

So off went Read and his men – in his case to a serious wound “fifty yards from the Redan” and a career which he could never have dreamed of.

Read lived on until 1918 – amongst of the last survivors of the Crimean War – tended as he grew older by his unmarried daughter Louise. I wonder what he made of the battles of WW1. Aged 88, he suffered a stroke at the end of February and died at his home in Parchmore Road on 8th March, “held in honour by all the people about him”. Read was buried in Queen’s Road Cemetery, Croydon, with an impressive following of mourners. No trace of his grave now remains – the cemetery was badly damaged in the Blitz – but his medal group stands as the testimony to a really full and interesting life.