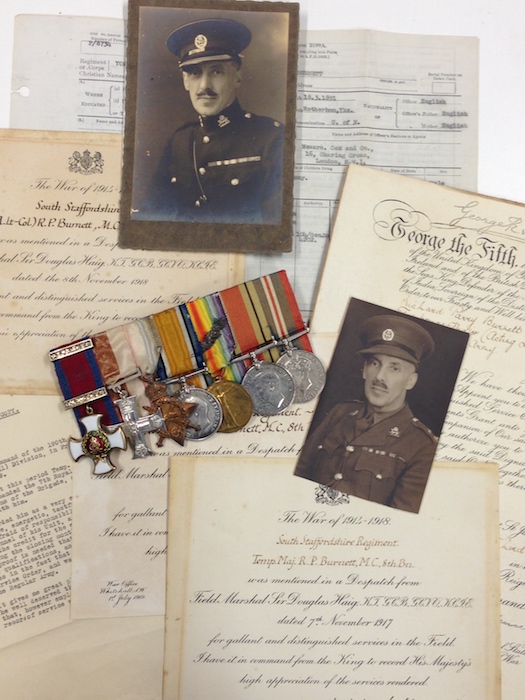 Colonel Richard Parry Burnett was born on the 18th March 1891 in Rotherham, Yorkshire. His family moved to Oxley, Wolverhamption and he was educated at Wolverhampton Grammar School. Qualifying as civil engineer he volunteered for military service on the 5th August 1914, and was selected for a commission into the 8th Battalion South Staffordshire Regiment, raised in Litchfield.

Appointed Captain May 1915, and appears to have been a member of the Battalion’s advance party, landing in France on the 16th July 1915.

The Battalion joined 51st Brigade, 17th (Northern) Division. The Division had been selected for home service, but that was reversed and they proceeded to France landing in July 1915 concentrating near St Omer.  They moved  into the Southern Ypres salient for trench familiarisation and then took over the front lines in that area.  In the Spring of 1916 they were in action at the Bluff, south east of Ypres on the Comines canal then moved south to the Somme seeing action during the Battle of Albert, in which the Division captured Fricourt, and the Battle of Delville Wood.

In November 1916 he was appointed Lieut Colonel commanding the 8th.

In 1917 The Battalion moved to Arras and saw action in the First and Second Battles of the Scarpe and the Capture of Roeux.

Wounded again on the 27th May 1917, this time in the arm and head. Following his recovery he was sent as Quartermaster to the Army Infantry School and on returning in April 1918 he was attached to the 7th Battalion  Royal Fusiliers  (City of London Regiment)  as commanding officer of the Battalion.

He remained with the 7th until its return to England in May 1919.  He then applied for a permanent commission and this was granted in January 1921 to the Yorks and Lancs Regiment.

During the interwar years he served at home and in India and only regained his Great War rank of Lieut Colonel on his retirement from the Army in December 1938.

At the outbreak of the Second World War he rejoined the Regiment and in 1941 was commanding the 11th Battalion.

Relinquished command of the Cambridge sub area 15th March 1943. This is the last entry on his Army form B199A.

He appears in Army lists up to and including 1946, but he does not appear in the April 1947 Army List.

Throughout this period Temp Lt Col R.P. Burnett D.S.O. M.C. commanded the 7th Royal Fusiliers one of three Battalions of the Brigade, and I was therefore in constant touch with him.

I regarded him as a very efficient Commanding Officer capable, energetic, tactful, possessed of initiative and not afraid of responsibility, he set a fine example to the personnel of his unit, and to him, to a great extent, is due the credit of the excellent record of this Battalion during the closing months of the War.

If proof is needed that I was right in my appreaciation of his qualifications, and of his general good service, it lies in the fact that he was awarded the Distinguished Service Order, and was later selected for a Commission in the Regular Army.

It gives me great pleasure to record that in my opinion, he well deserved this recognition.  I am confident, moreover that however employed, he will continue to add to the fine record of service which he has already achived.”

He died in March 1971 in Wincanton, Somerset/Dorset.

Warrant for the D.S.O. (glued to a board)