‘This Officer took over command of a company ten minutes before the attack. Throughout the whole advance he showed the greatest coolness and grasp of the situation. When a readjustment of the line became necessary he organised it with the utmost skill, after having collected all his wounded, which was done under heavy machine-gun fire. The small number of casualties suffered by his company was due to his gallantry and fine example.’

He briefly returned to the Colonial Service in 1916 before making his way to the Household Brigade Officer Cadet Battalion in May of 1917.

Commissioned five months’ later into the 2nd Battalion, Welsh Guards, he served in France from March 1918.

Returning to the Colonies   upon conclusion of the Great War, Hill returned to Northern Rhodesia and rose through the ranks of the Colonial Service to eventually become a District Commissioner and Acting Provincial Commissioner; this second stint at more senior level nonetheless involving a plethora of ‘Boys Own’ escapades, not least of which included attacks by man-eating lions! (‘Lions and Men’, Northern Rhodesia Journal refers).

Re-commissioned as a Major in the Welsh Guards in March 1940 he spent most of his time on Staff duties but found himself a posting with his unit towards the end of the hostilities.

Hill and his wife retired to Crickhowell in the Brecon Beacons and died in 1968.

Sold together with copied research. 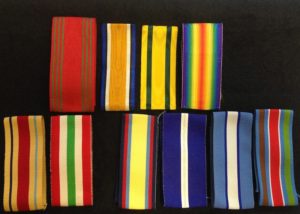