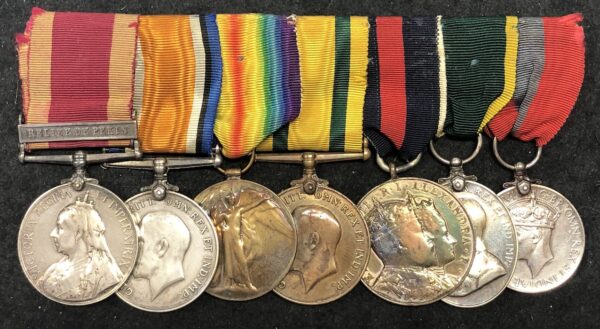 William Joseph Evans was born in Swansea, Glamorganshire, and enlisted into the Royal Welsh Fusiliers in February 1896, aged 18 years.

Having served in the occupation of Crete, he embarked for China and witnessed active service in the Boxer Rebellion, including the relief of Pekin, where the Royal Welsh were famously the only British infantry battalion to be engaged.

Transferred to the Army Reserve in January 1904, he was discharged in February 1912, in which latter month he joined the Royal Army Medical Corps (Territorial Force).

Mobilised in August 1914, he served in the rank of Corporal and first went to France in June 1918; latterly, however, he transferred to the Royal Engineers as a Sergeant. In addition to being entitled to the Silver War Badge (No B311159), he was awarded the T.E.M. in September 1924.

An exceptionally interesting and rare combination of awards.

Condition – All except ISM are rather polished so Fine and better, ISM GVF, suspension ring on the T.E.M. bent.