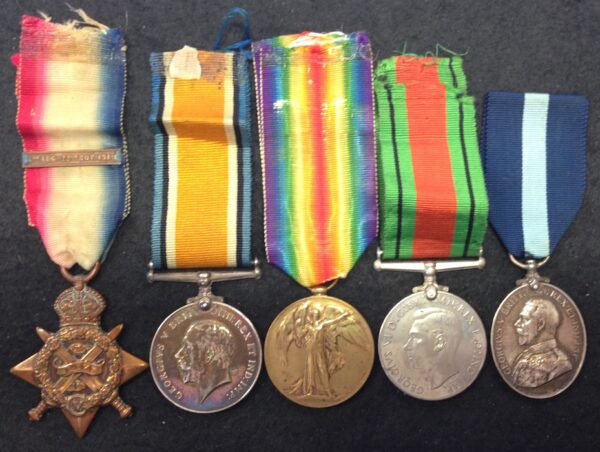 Harry Perry served in France with the 2nd Battalion, Oxfordshire and Buckinghamshire Light Infantry, from 20 September 1914, and later transferred to the Royal Engineers. Sold with copied Medal Index Card.

The 2nd Battalion during the First World War:

In August 1914, the 2nd Ox and Bucks arrived on the Western Front, as part of the 5th Infantry Brigade, 2nd Division, I Corps – the 2nd Division was one of the first divisions of the British Expeditionary Force (BEF) to arrive in France. The battalion took part in the first British battle of the war, at Mons, where the British defeated the German forces that they had encountered on 23 August. A combination of German numerical advantage and the French fifth Army’s retreat led to the battalion subsequently taking part in the 220-mile retreat, in exceptionally hot weather, that began the following day, not stopping until just on the outskirts of Paris, then halting the German advance at the First Battle of the Marne (5–9 September). The 2nd Ox and Bucks later took part in all the subsidiary battles of the First Battle of Ypres (19 October – 22 November) that saw the heart ripped out of the old Regular Army, with 54,000 casualties being sustained. In the First Battle of Ypres the 2nd Ox and Bucks first engagement with the enemy was on 20 October in an attack on the Passchendaele ridge. The battalion had heavy casualties: four officers killed and five wounded and 143 other ranks killed or wounded. On 31 October the Germans launched a large scale attack against Lieutenant-General Sir Douglas Haig’s I Corps in the area of Ypres which commenced with a heavy bombardment followed by a mass infantry attack; two companies of the 2nd Ox and Bucks took part in the defence and subsequent counter-attack which forced the enemy back to their front line. On 11 November the Germans made another attempt to capture Ypres, sending—on the orders of the German Kaiser—the élite Prussian Guard against the British forces. The 2nd Battalion counter-attacked them at Nonne Bosschen wood, preventing their advance and then routing them. First Ypres was the last major battle of 1914. The 2nd Ox and Bucks sustained 632 casualties during the first five months of the war and by 1915 it was a very different battalion from that which had arrived on the Western Front at the start of the war.

In 1915 trench warfare commenced with both sides developing impregnable defences; leading to high casualties in return for minimal gains. At the Battle of Festubert (9–16 May) – which was launched in support of the French attack south of Vimy Ridge and included the first British night action of the war – the 2nd Ox and Bucks were part of the second wave of the 5th Brigade attack and, during the course of the battle, suffered just under 400 casualties. The 2nd Ox and Bucks were involved in heavy fighting at Richebourg l’Avoue on 15–16 May. The 2nd Ox and Bucks and other battalions of the regiment also saw action at the Battle of Loos (25 September – 8 October): 2nd Ox and Bucks took part in the subsidiary attack at Givenchy with 263 casualties on 25 September. The Ox and Bucks 5th (Service) Battalion went into the Battle of Loos on 25 September 1915 at a strength of 17 officers and 767 men and only two officers and 180 men survived the battle. The 2nd Battalion took part in the subsequent attack against the Hohenzollern Redoubt (13–19 October). Following the battle of Loos few pre-1914 2nd Ox and Bucks officers remained, they had either become casualties or promoted to take up positions in other battalions.

In January 1916, the 2nd Ox and Bucks were at Cottes St. Hilaire; the 2nd Division was at that time taking its turn in the corps reserve. The battalion later moved to Bethune and then returned to the Festubert trenches. Lieutenant Colonel Richard Crosse took over command of the 2nd Ox and Bucks on 8 July 1916 and was to lead the battalion for the next three years.

The New Year of 1917 brought with it a period of severe weather conditions on the Somme plain which led to an unofficial truce between the two sides. In March 1917, the Germans began the withdrawal to the Hindenburg Line (14 March – 5 April) and at the end of March the 2nd Ox and Bucks moved from the Somme to the back areas of Arras. The 2nd Ox and Bucks and other battalions of the regiment saw much involvement in the Arras Offensive (9 April – 16 May), including at the Battles of Scarpe and Arleux. The 2nd Ox and Bucks took part in the battle of Arras from 11 April and had a leading role in the battle of Arleux on 28–29 April: during the battle the battalion protected the right flank of the Canadian 1st Division which was critical to the capture of the village of Arleux and sustained more than 200 casualties. The battalions of the Ox and Bucks saw further service in many of the subsidiary battles during the Battle of Passchendaele (also known as Third Ypres) that took place between 31 July–6 November. Some of the battles that the Ox and Bucks took part in included Menin Road and Polygon Wood in September and early October. The 2nd Ox and Bucks  also took part in the Battle of Cambrai (20 November–3 December) that saw the first large-scale use of tanks by the British and was the last major battle of the year.

In January 1918, the 2nd Ox and Bucks marched to Beaulencourt. They moved to Havrincourt Wood later that month, and then on 9 February to Metz-en-Couture. They were at Vallulart Camp, Ytres, when on 21 March 1918 the Germans launched the last-gasp Spring Offensive (Operation Michael),  which led to the furthest advance by either side since 1914. The 2nd Ox and Bucks were due to go into the corps reserve when the enemy began a colossal bombardment of Allied positions and on 22 March 1918 were in position around the village of Bertincourt. They, and other battalions of the regiment, sustained heavy casualties as part of the defence of the Somme during the Battle of St. Quentin (21–23 March), the First Battle of Bapaume (24–25 March) and in subsequent battles that saw the Germans achieve significant gains as the battalion was forced back across the old Somme battlefield to the 1916 line on the Ancre. The battalion remained in the Ancre area from 29 March 1918 to 3 April 1918.

After the enemy Spring offensive lost its momentum, the Germans launched Operation Georgette in April which the Ox and Bucks defended against in the Battle of the Lys and subsequent actions.