With a detailed file of research, LGs and copies of Indian Army papers.

Edward John Ryan was born in Bangalore, Madras in October 1864, and enlisted in the Royal Artillery in 1884 and served as a Gunner in C/4 RA between September 1884 and May 1886.
On the Unattached List from May 1886 until September 1887 when he was promoted to Sergeant and served as such until March 1889.

Sikkim 1888 – promoted to Sub Conductor for his services with the Sikkim and Hazara Field Forces.

Relief of Chitral – on Special duty, lines of communication; Mentioned in Dispatches.

Waziristan 1901-02, in command of Ordnance Godown at Jandola.

Mahsud Campaign 1917 – served with the South Waziristan Force, May 1917 to Sept 1917 and  Mentioned in Dispatches.

Also served at various times in command of the transport etc. for one of Lord Roberts’ tours of India and for a Viceregal tour.

NOTE: The Court Mounted group was bought by the previous owner some years ago, the renamed Tibet to Ryan being purchased much later by the collector from auction to re-unite the group. His entitlement to a Tibet medal is not confirmed but it is clearly as he had it.

Condition, first six are court mounted for display and generally NVF and better;  last (Tibet) is loose, and NEF.
NOTE: the Tirah clasp on the IGS 95 should be Punjab Frontier. 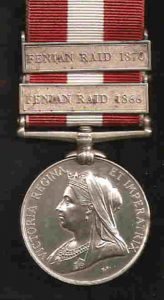