An interesting Russian Order of St. Anne pair to a Major in the Canadian Infantry

An interesting Russian Order of St. Anne pair to a Major in the Canadian Infantry

Russian Order of St. Anne, Third Class, London Gazette 14 January 1918:
‘For distinguished service rendered during the course of the campaign.’

Gordon Dixon Oulster was born in Toronto, Ontario, on 12 September 1889, and was serving as an officer in the Non-Permanent Active Militia of Canada when he was mobilised for active service with the 100th Regiment (Winnipeg Grenadiers), Canadian Infantry on 12 August 1914. He transferred to the 11th Battalion, Canadian Expeditionary Force at Valcartier on 23 September 1914, and embarked for England on 3 October 1914.

He served during the Great War initially with the Sub-Record Office at Shorncliffe, and was promoted temporary Captain on 1 May 1915, and temporary Major on 7 September 1916. Whilst in England he had various spells in hospital, suffering from broncho- pneumonia, ptomaine poisoning and hypertrophy tonsils, and returned to Canada permanently unfit on 12 May 1917.

He was seconded to the Military Service Branch on 12 July 1917, and served with them and the Imperial Munitions Board for the remainder of the War.

For his services during the War his name was brought to the attention of the Secretary of State for War, and he was awarded the Russian Order of St. Anne Third Class.

He is not entitled to a Victory Medal, this pair being his only entitlement.

Oulster was struck off the strength of the Canadian Expeditionary Force on General Demobilisation on 30 June 1919, and died at Toronto on 30 September 1935.

Sold with a large quantity of copied research, including a photographic image of the recipient. 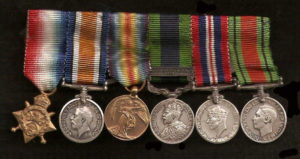