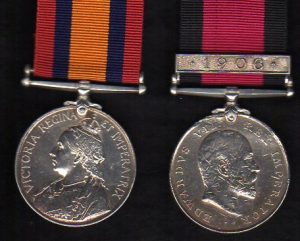 For the QSA, he is just about on a roll of his own – showing service with Army Stationery Department at Pietermartizburg.

The Natal 1906 with dated clasp, named to him in running script as Qtrmaster and Lieut. in the Natal Field Artillery. This is correct on the roll.

Initial research shows that Nicholls served in the Civil Service and Post Office before the Boer War.

In 1903, he is recorded as travelling to Durban.

Condition – The QSA Medal about GVF, the Natal has some severe knocks and cuts and F only.