‘The incident occurred in October 7th, when the battalion was ordered to capture and hold at all costs certain trenches called the “Tangle” which were behind the front line, and shaped like a triangle. One company went “over the top” and took the first line. Another company was divided into bombing sections to fight their way up the “Tangle” trenches. Sergeant Johnson was in charge of one party which had got to work with a will, when he was hit in the left ankle. Taking in the situation, he crawled back to the supporting company and delivered his report to the Colonel, who complimented him, and at once sent reinforcements and the position was held.’

Thomas Lister Johnson was born at Knaresborough, Yorkshire on 15 May 1894, the son of William and Fanny Johnson of 56 Reddish Road, Stockport. He worked at a Printing Press before enlisting with the 12th West Yorkshire Regiment and entering the war in France on 10 September 1915.

Transferring to 11th Battalion, he was present for the attack upon Le Sar and on 7 October 1916 was part of the attack upon the Second Flers Line. The West Yorkshire Regiment in the War refers to the incident which won him his award, stating:

‘A bombing attack was then launched. From Le Sars, along the Second Flers Line, bombing parties pushed westwards and drove the enemy out of the 50 yards of his trenches. Other bombing parties tried to bomb northwards up the two communication trenches between the First and Second Fler Lines.’

Despite his wound Johnson continued to serve, returning to 12th Battalion, West Yorkshire Regiment and was transferred to the ‘Z’ Class Reserve on 24 February 1919; sold together with copied research including London Gazette entries, M.I.C. and medal rolls as well as census data and extracts from Newspapers and a Regimental History. 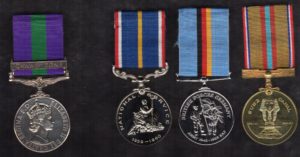