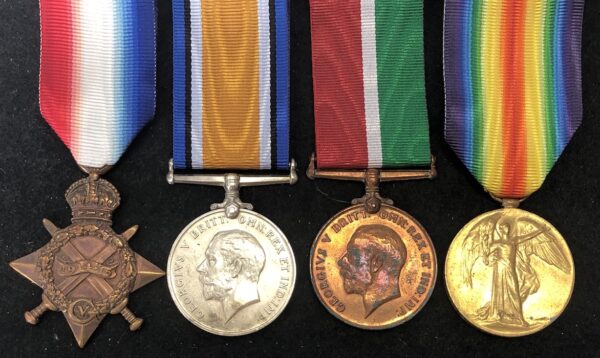 Horace Edward Hambrook was born in 1874 in Gravesend. His MIC confirms he received a 1914-15 trio, landing in Egypt on the 8th August 1915 and that he was discharged on the 16th September 1916 as permanently  physically unfit for further duties. His Mercantile Marine medal card confirms that he was to receive the war medal as an army issue (ie not from the mercantile marine).

His service papers show he enlisted in the A.S.C. on the 7th July 1915  and that he worked in the Canteens (with previous service in the Mercantile Marine as a Steward) and record him being discharged as no longer being physically fit.

Condition – VF, star a little polished. Mercantile Marine and Victory with some verdigris