“Quartermaster in Ireland” – George M’Gleazy and the Royal Irish Artillery

All that now survives of a remarkable and long artillery career is the simple regimental Medal of Merit given to Quartermaster George M’Gleazy, R.A., on 1st January 1802 “by the Officers of the Regiment [as] a slight recognition of his soldierly merit”. The medal – a very thin engraved plaque in hallmarked silver – recently appeared in a London auction and attracted hardly any interest; it had previously been offered in a Spink Circular in 1971 for the (then) considerable price of £37.50. Many collectors fight shy of engraved silver medals of this sort and date because of the possibility that they are later fantasy pieces. But this one seems absolutely genuine – and at least fits perfectly with the career of a known officer. 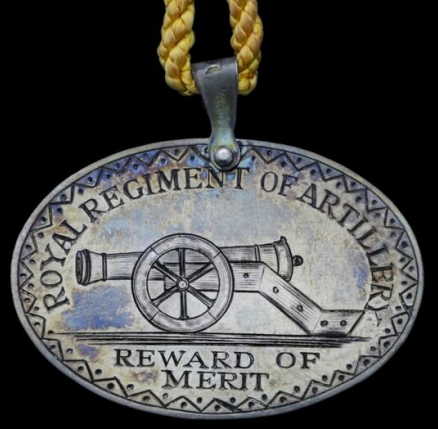 George M’Gleazy (or Gleasy, or McGleazy or McGleasy) was born in Belfast as long ago as 1747 – a very early date for a surviving named medal; he would have been in his 20s when Wellington and Napoleon were born! He enlisted into the Royal Irish Artillery before 1777 and is encountered in various records from those distant times – in 1790, for example, when one of his daughters was baptised, he was a Gunner at Fort Carlisle in Cork Harbour, one of 200 men of the RIA stationed there, and in 1793 he joined a masonic lodge in Dublin.

The little-known RIA is a very interesting organisation. It was, as its name implies, the garrison artillery for Ireland, whose role was to defend ports, harbours, depots etc scattered over the length of the island. It was raised as a cadre “Train” as early as 1687, and, remarkable though it now seems, it was not until 1755 that Irishmen were allowed to serve – the Test Acts enforced Protestant English enlistment. However, in February 1756 the law was amended to include Protestants from the Province of Ulster (which allowed M’Gleazy to join). On 1st April 1756 the Train of Artillery was expanded to a full company and it was further increased in 1760 to four companies, designated a regiment with the full title The Royal Irish Regiment of Artillery, with the Earl of Kildare as its first Colonel in Chief. By 1800 the Royal Irish Artillery had reached its high point of twenty Marching Companies and an Invalid Company, with a total strength of 2,132 men. They were latterly recruited all over Ireland and were trained in Dublin Castle and then in Woolwich. 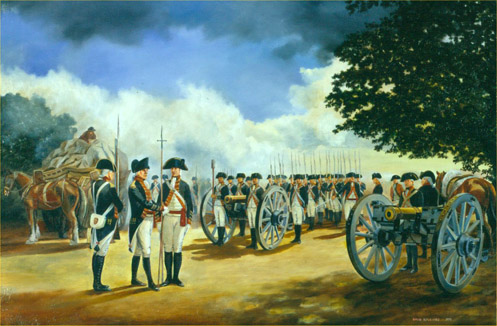 The various companies  served on a rota basis at different locations in Ireland and some were sent on garrison duty overseas, most noticeably to the West Indies where, in common with other military units based there in the late C18th, they suffered terrible casualties from tropical diseases. Volunteers fought in various RA batteries during the American War of Independence 1776-63 and RIA companies were in action in Flanders in 1794 and in the West Indies in 1795, when yellow fever killed more than the French: out of 11 officers and 288 other ranks only 4 officers and 43 men survived. Back home they were involved in several engagements in the Irish Rebellion of 1798.

M’Gleazy may well have served in the Irish Rebellion and there is an intriguing possibility that he had served in the American Revolutionary War – he is named in the List of Subscribers to a newly-published book on the war in 1809, which may indicate a personal presence, or perhaps simply that he was buying it out of general interest or for the officers’ library at the depot.

George M’Gleazy was appointed Quartermaster of the Royal Irish Artillery on 10th August 1795, the only one in that rank, and presumably spent his time thereafter – and possibly for a long time before – in the RIA depot at Chapelizod. This fascinating village, lying in the Liffey valley on the edge of Phoenix Park, was apparently named after the legendary Princess Iseult and was once a separate village since absorbed into the suburbs of Dublin. It was the depot of the RIA and its successors for 150 years and its barracks and admin offices were located on Main St., later becoming the RUC and RIC barracks and still standing. Many interesting period buildings still survive in the village. Chapelizod Fort – which must have been well-known to M’Gleazy – lies close by and the C14th church of St. Laurence contains the graves of RIA personnel interred over many years.

After the Act of Union in 1801 the RIA regiment was reduced by 10 companies (disbanded) and the remaining ones were absorbed into the (British) Royal Regiment of Artillery to become the 7th Battalion RA which, on 1st April 1801, had 4 companies on garrison duty in the West Indies and 2 companies retained in Ireland;  4 other companies were then made up from personnel taken from the reduced remnants of the other RIA companies. M’Gleazy became Quartermaster to the new 7th Battn., R.A., which was still based at Chapelizod; his regimental medal is dated 1802 so was presumably awarded to mark the end of one phase of the RIA’s existence and the start of the new. In 1818, he was given an impressive promotion to the rank of “Quartermaster in Ireland” but he retired later in that year, having served for well over 40 years by that date. 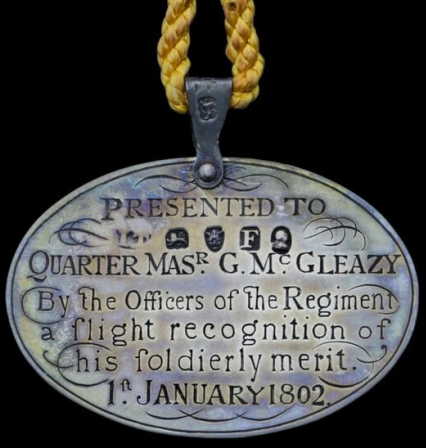 George M’Gleazy died in Chapelizod on 30th January 1822 aged 75 and is buried there. His simple regimental merit of merit is probably all that remains as a token of his long career. 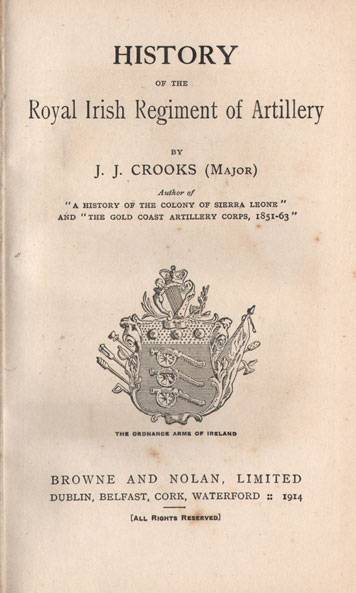 There is a good, detailed account of the RIA, published as long ago as 1914 and now made available as a reprint by “Naval and Military Press”: The History of the Royal Irish Regiment of Artillery by Major J. J. Crooks.

There is also a re-enactment society devoted to the RIA.