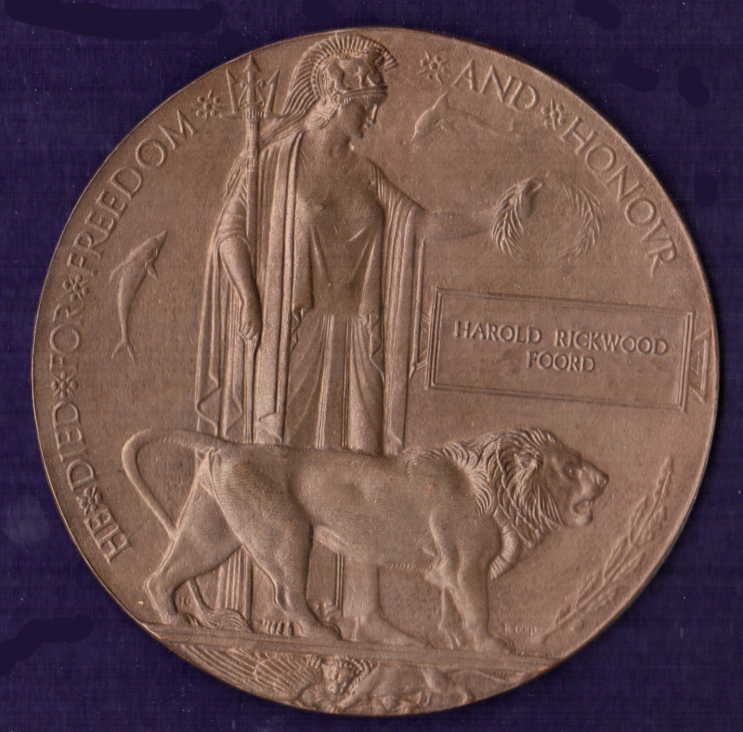 The idea that the government would freely give out some sort of memorial to commemorate service personnel who had died on war service was extremely novel. Although unofficial or private-purchase “memorial plaques” of various kinds turn up for earlier wars – most commonly for the Boer War of 1899-1902 – there had never been any suggestion that the government itself would give something for war service other than to the participating serviceman or woman. The fact that a distinctive personalised memorial to be given to next of kin, paid for by the state, was even considered is, of course, a measure of the extent to which “the Great War” affected people and families on a wider scale than ever before and had drawn in the whole nation and empire.

The matter was first officially raised in October 1916 when a government committee was set up to examine the possibilities of producing and issuing a commemorative memorial to the fallen, the cost to be borne by the State, and first publicised in The Times in November as a Memento for the Fallen. State Gift for Relatives. Chaired by Sir Reginald Brade, Secretary of the War Office, it comprised thirteen members from the Lords and Commons, some with military or naval experience, and representing various government departments including the Indian, Dominion and Colonial Offices. Having discussed the possible form of a memorial and decided that a small named bronze plaque best fitted the plan, a Public Competition was announced in August 1917, with prizes (totally not more than £500) for the winning designs. To help with the design side of the plan, directors of major art galleries were co-opted, including those of the Victoria and Albert Museum, the National Gallery and the British Museum’s Department of Coins and Medals.

Detailed instructions were laid down as to the size and materials to be used – it was to be no more than 18 inches square (or 4.75” diameter if circular) and relief models of the proposed design, in wax or clay were to be submitted. It was decided to incorporate some symbolic figure and carry a suitable inscription, settled as “He (or She) Died for Freedom and Honour”, as well as the name of the deceased but “that the design should be essentially simple and easily intelligible”. The final instructions informed readers that all competitors “must be British born subjects” and that the models must be “delivered to the National Gallery not later that 1 November”. Each entrant could submit no more than two designs and would remain anonymous, submitting his or her model by pseudonym. 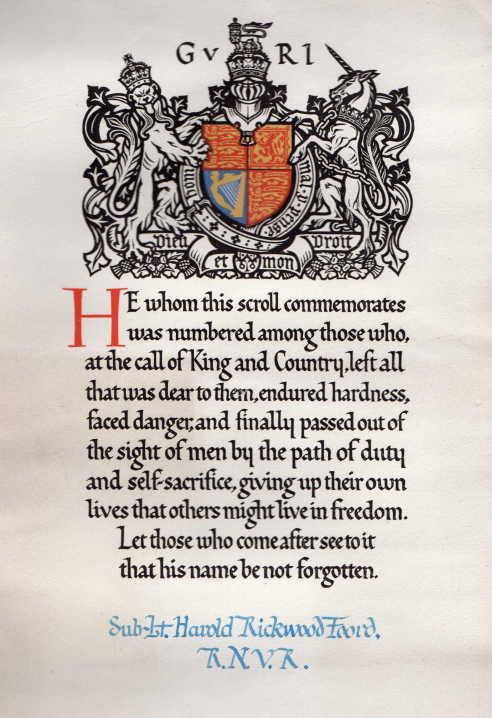 Details of the public competition (which was extended to December to allow those on overseas service to participate if they wished) were published in The Times in August 1917 and created a high degree of interest. In October, it was also decided by the Committee that an Illuminated Scroll, to be designed “in house” and not by public consultation, would also be presented with the memorial plaque. The wording of this scroll – now very familiar to 1914-18 collectors – was carefully thought out and that proposed by Dr. M. R. James of King’s College Cambridge (an author now more famous, perhaps, for his ghost stories!) was chosen, with a few slight amendments to his wording.

By the time the open competition for the plaque ended, over 800 entries had been submitted from artists at home and from all over the empire and many Fronts of the war. The finalists’ entries would be submitted to the War Office and Admiralty and the King would also be asked to approve.

The results of the plaque competition were published in The Times in March 1918, with the winning entrant (who received the not inconsiderable sum of £250) announced as the Liverpool sculptor Edward Carter Preston. Other well-regarded and prize-winning designs were supplied by Charles Wheeler, a Chelsea sculptor (£100) and by W. McMillan (who designed the 1914-18 British War Medal and the Victory Medal), Sapper G. D. MacDougall and Miss A. F. Whiteside, who all received £50.00. Nineteen other artists were “commended” and named in The Times and the two-dozen leading entries were put on temporary display in The Victoria and Albert Museum in the summer of 1918.

The winning design – the familiar figure of Britannia in mourning, proffering a wreath, with two dolphins (representing sea power) and the “British lion” in the foreground – was the work of the prolific Liverpool sculptor, medallist and painter Edward Carter Preston (1885-1965). 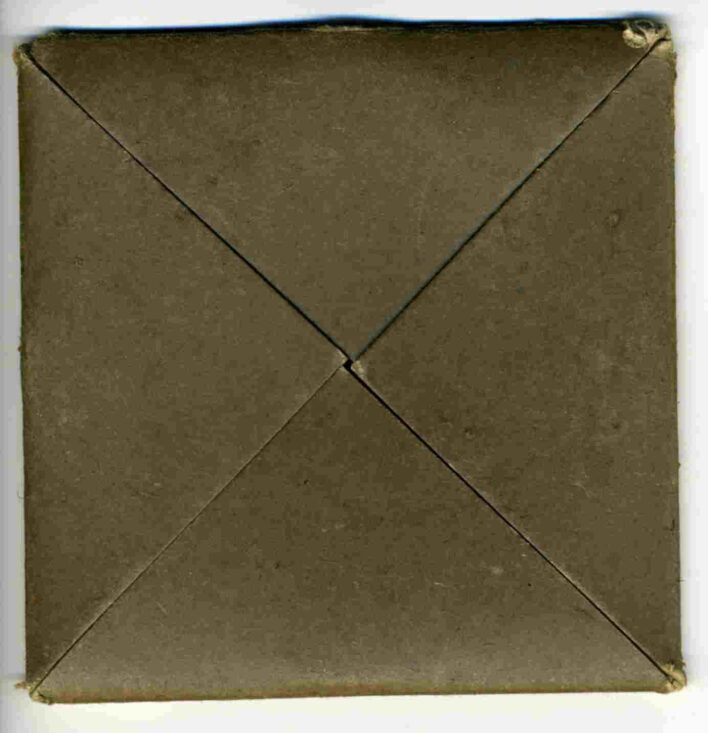 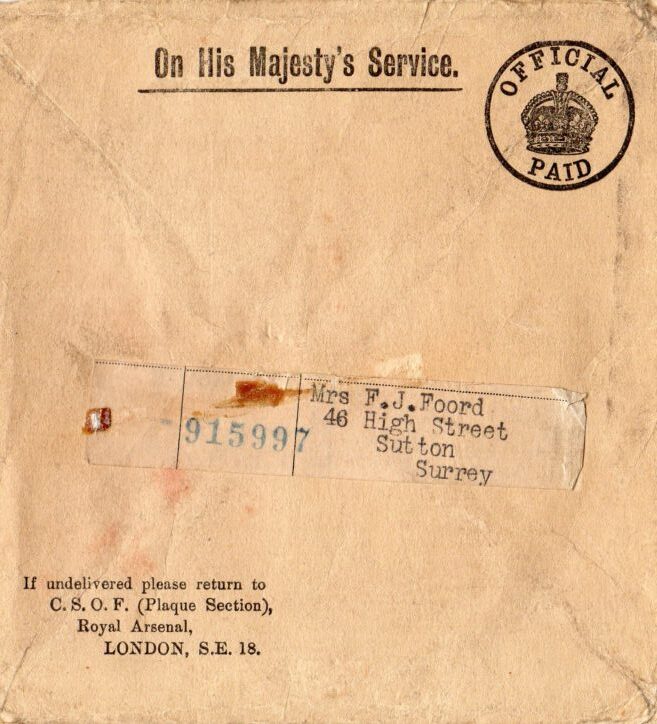 The full details of the plaque, its criteria for award and the degree of “next of kin” who were acceptable recipients were quickly laid down and a full description of the new award was published in The Times in March 1918. Not surprisingly, given the international significance of the whole scheme, it drew immediate comment, much of it quite critical! The lion (“a lion which a hare might insult”) and the proportions of the figure and animals were particularly targets for attack. There were, as a result, many attempts to revise and amend Carter Preston’s design (some alterations being the result of practical problems with die production and clarity of finished design) but in the end the artist prevailed and there was little alteration to his original pattern.

Manufacture began in December 1918, after the associated Scroll design and its wording had been agreed. Initial production was carried out in a former laundry factory at Church Road, Acton, London, but from December 1920 moved to Woolwich Arsenal and was extended to other factories once they had ceased war munitions’ production. As originally designed by Carter Preston, the “H” in “He died…” was a wide initial, but many are found with a narrower letter. It has been said that the latter were awarded to naval casualties, but there seems to be no foundation for this belief since both varieties are found to the army and the navy; it is probably no more than a factory die variation.

In fact, the “wide H” type seems to have been produced at Acton from Carter Preston’s original design. The designer’s initials are always present – by the lion’s front paws – and there is usually a small number between or behind the lion’s rear legs. 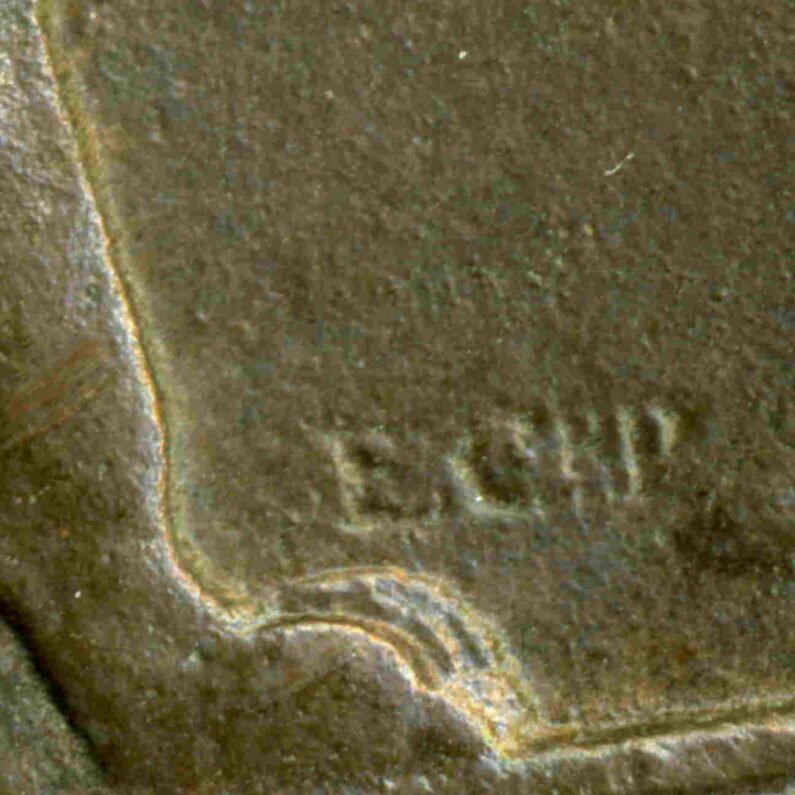 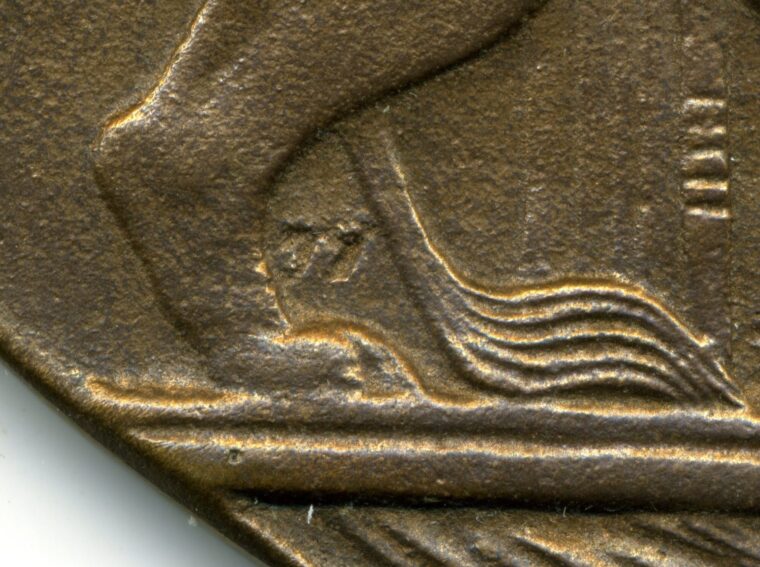 This was once thought to be a factory code or a batch code but is now accepted as a finisher’s or caster’s identification number, part of a system of batch or quality control. Those with the number after the lion’s legs (i.e. to the left as viewed) were produced only at Acton; those with numbers between the lion’s rear legs were produced at Woolwich Arsenal. Most of the latter carry on the reverse an combined “WA” in a circle as a manuf

acturer’s mark for Woolwich Arsenal, but many are completely unmarked on the reverse.

“The King’s Letter” of condolence sent with the plaque

From the beginning of 1919 perhaps as many as 1,360,000 plaques were issued, awarded not only in respect of those 900,000 or so British and Imperial service personnel who had actually died on active service, but also to anyone who had died on war service of many kinds and through disease or accident. The official cut-off dates were 4th August 1914 to 30th April 1920 – so that as well as those who died from the effects of the world war some time after it had ended, post-war casualties from the Russian Civil War, the Iraq Rebellion and operations on the North West Frontier of India were included. However, some plaques are known to have been issued into the 1930s, probably as simple “late issues” or resulting from late claims. They could, of course be presented by themselves, without any associated campaign medals, to those who died “at home” or who otherwise had no “theatre of war” service. Some plaques (bearing “She died…”, with production figures variously reported from 600 – 1500) commemorated female casualties – mainly nurses and often the victims of drowning on torpedoed or mined troop- or hospital ships.

Edward Carter Preston first made his name by winning the competition to design the Memorial Plaque in 1918 but he went on to become a major figure in Liverpool’s art world from 1918 up to his death in 1965. In 1931 he was commissioned by Sir Giles Gilbert Scott to prepare a series of sculptures for the city’s vast Anglican Cathedral and over thirty years – a lifetime’s work – produced fifty outstanding sculptures, ten memorials and several highly detailed reliefs for the growing Cathedral. He also worked on other smaller architectural works in Liverpool, Bath, Cambridge and Exeter and in the course of his long career cast a further seventy medallic designs for public institutions and societies. He also pursued his own artistic interests, sculpting on a smaller scale, painting watercolours, making prints and designing ornamental and practical objects. The family still continues to work within this artistic world. 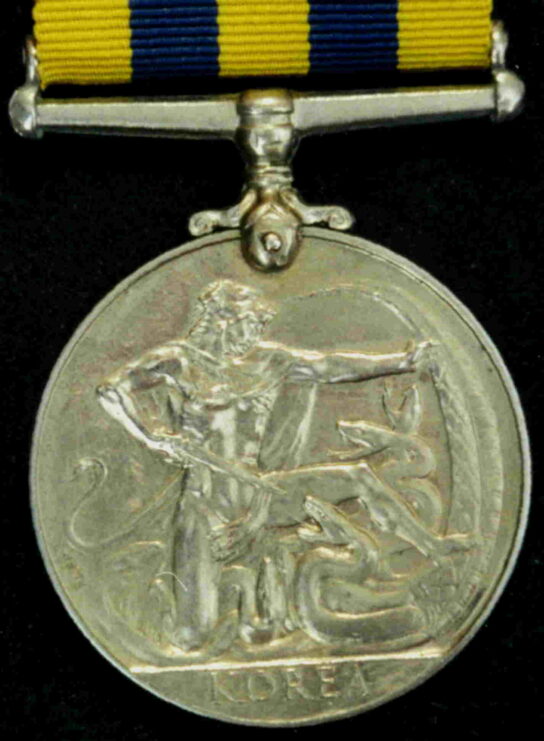 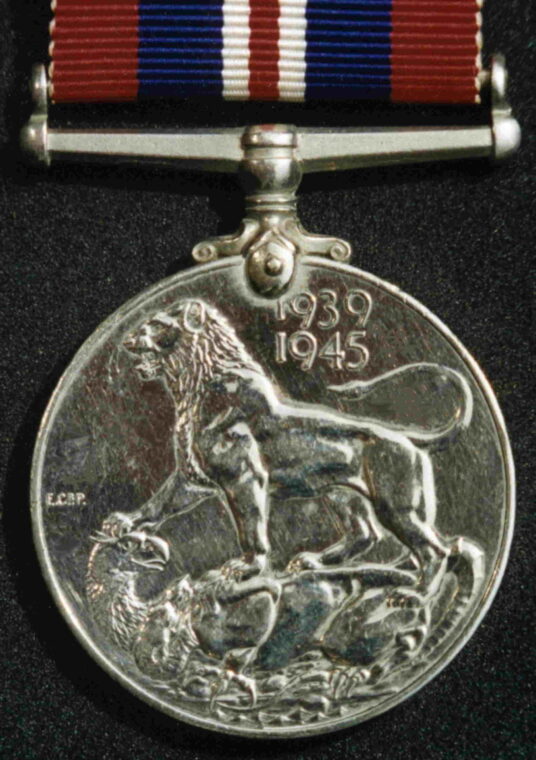 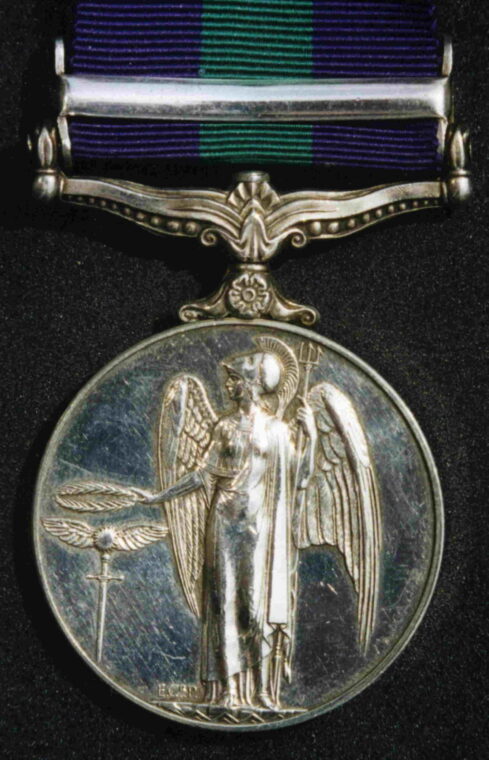 Nowadays, most medal collectors seem little interested in the actual numismatic aspects of the hobby, preferring genealogical or more general military interests and most medal reference books don’t even identify the designers. But Carter Preston became a familiar name in the world of medal design and apart from the Memorial Plaque as finally produced, he designed th reverse of the General Service Medal (GSM) 1918-62, the 1939-45 War Medal and the Korean War Medal – a long span of medallic designing!