The ‘Albuhera Cross’ to a Yeoman of the Guard 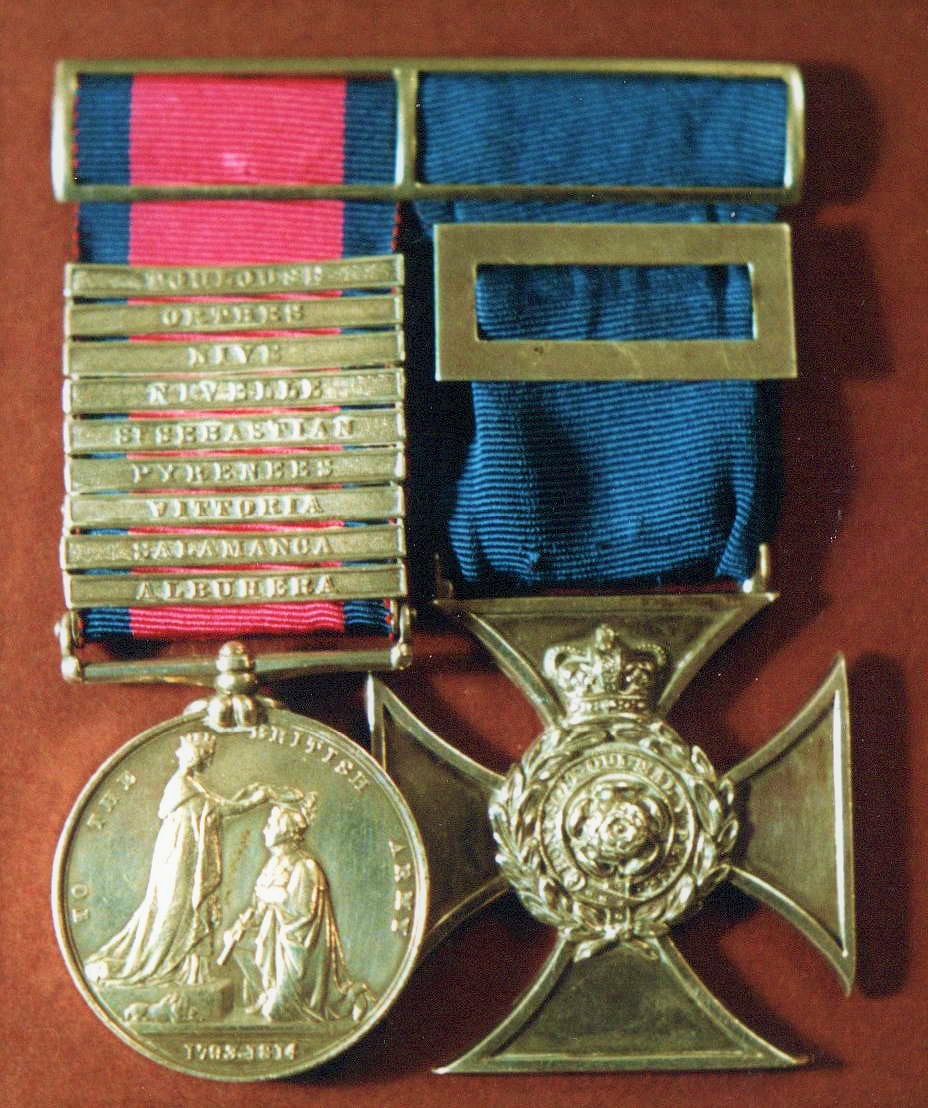 The two medals of Colour Sergt. Henry Parkinson, later a Yeoman of the Guard, serve to show the difficulty that researchers can have in actually establishing the service of a Peninsular War soldier.

As he was underage, his pensionable service began from age 18 in May 1810 and his total allowable regimental service in the end amounted to 28 years and 2 days after age 18 or 31 years in total. Add to this his later Yeoman service from 1838 to 1868 and Parkinson had nearly 61 years’ service!

Parkinson was discharged in May 1838 in Dublin: “a case of disability contracted in and by the service” and described then as 5′ 11″ tall, with brown hair, grey eyes and a fresh complexion. He had been “found unfit for further service from chronic rheumatism and lameness of the left leg from a wound … he was wounded in the neck and hip at the battle of Albuera.” The regimental casualties at Albuhera were appalling – 705 killed and wounded over both battalions – so little wonder that he was wounded twice. One later newspaper account recorded that “in this battle, six of his rear men were shot down one after the other. But after this he seemed to bear a charmed life, so that his comrades were in the habit of saying that no bullet could harm him.”

Parkinson’s papers credit him with service “in the Peninsula three years and four months, in America six months, in France three years and a half, in the Mediterranean eleven years; wounded in the neck and hip at Albuhera and present at the battles of Albuhera, storming of Badojos (sic), Salamanca, at the siege of Ciudan Rodrigo (sic), Vittoria, Pyrenees, Orthes and Toulouse and the Battle of New Orleans”. 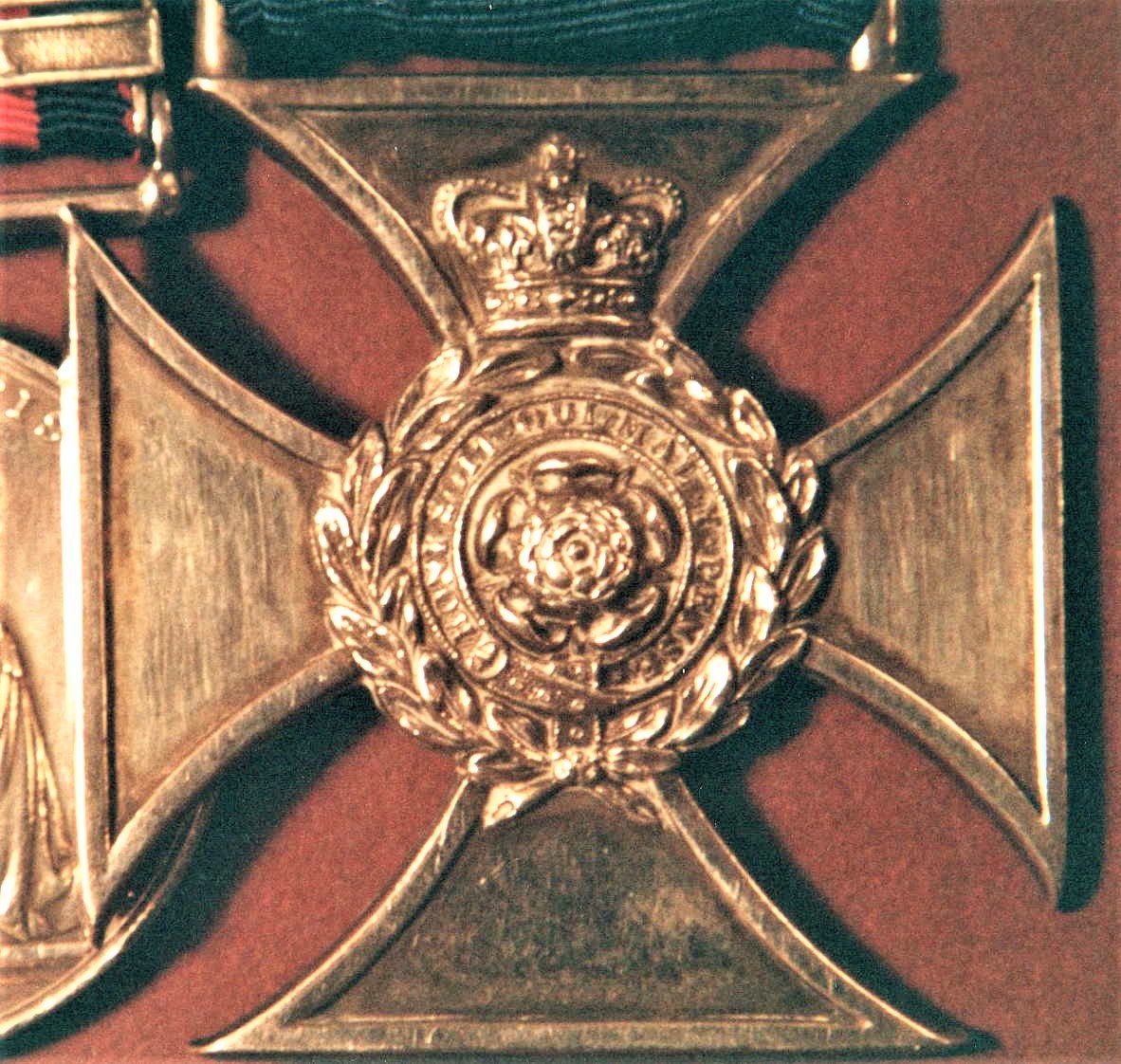 Parkinson was given a regimental award which at one time was known as “the Albuhera Cross” (and is referred to as such in at least one regimental account). This medal appears to be of silver, is 1 3/4” square and now hangs via an integral bar on the top of the medal from a modern royal blue ribbon, with a decorative slider. The obverse centre carries a ‘Tudor rose’ (as a badge of the 7th Regt., the Royal Fusiliers) surrounded by a garter with the usual motto – Honi Soit Qui Mal Y Pense – within a wreath. The whole central design is surmounted by a crown. The reverse of the cross is plain and in this instance is engraved with H. Parkinson, C.S.R.F. [Colour Sergt., Royal Fusiliers] and a list of nine battles in the Peninsula, with their dates. 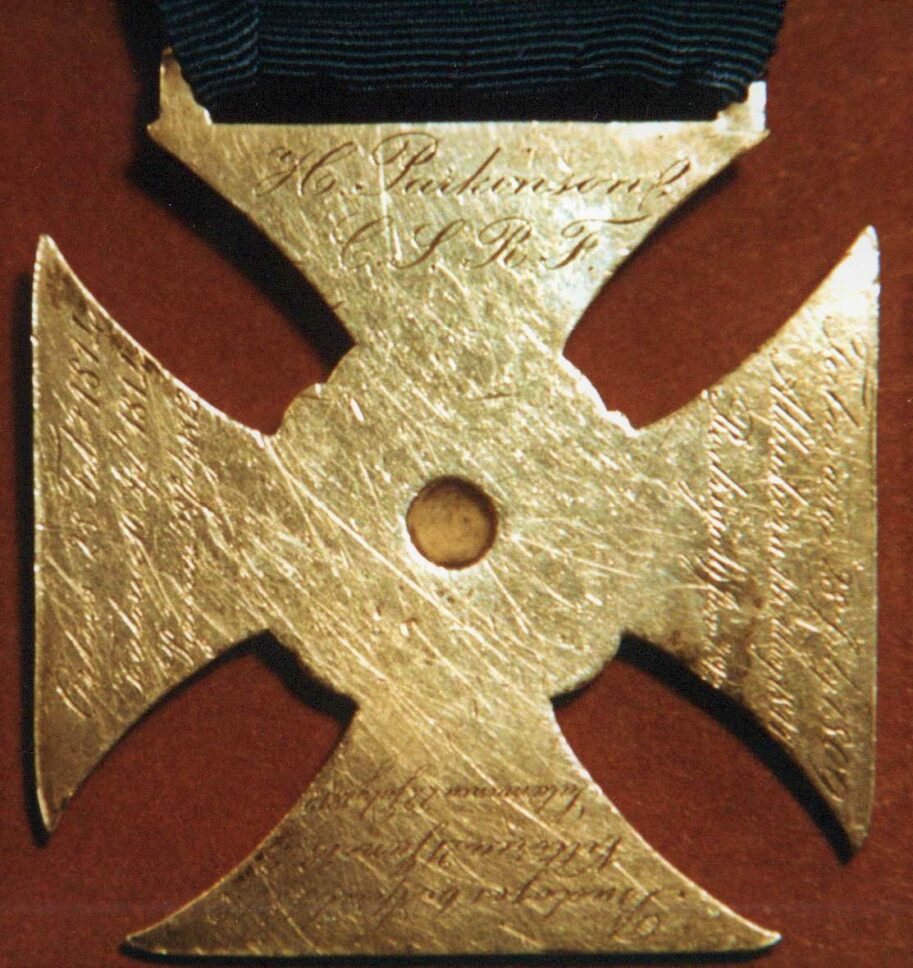 However, if this Cross were indeed an award for gallantry or distinguished service at Albuhera in 1811 – a battle in which the 7th, somewhat unusually, had two full battalions in action – one would expect there to be more surviving examples. As it is, the Cross appears to be rare, with this one and a few other examples (e.g. in the regimental museum) the only ones which have come to light.  In fact, it is  likely that this Cross is simply another example of the regimental awards for long service, gallantry or merit which appeared during the Napoleonic Wars. It would appear to have been instituted under the aegis of Lord F. Fitz-Clarence as Colonel of the 7th between 1825-28. The Cross is illustrated by line drawings in War Medals and Decorations by D. Hastings Irwin and more recently in J. L. Balmer’s volume on regimental awards to the regular army [as R190]. There is apparently a copy of it in the National Army Museum.

Parkinson’s discharge papers show that [the officers on the discharge board] “are of the opinion that he has been a most excellent non-commissioned officer and soldier, highly trustworthy and sober”. It was presumably on the grounds of their recommendation that in 1838 Parkinson was appointed to the Queen’s Bodyguard of the Yeomen of the Guard – only the 14th appointee after the order of 1823 which restricted appointments to NCOs of the Army and only the second who had not been a member of the Guards’ Brigade.

Interestingly, those appointed to the Queen’s Bodyguard had to be in possession of the Long Service and Good Conduct Medal “or similar award” but despite his very long service, there is no trace of a LSGC to Parkinson. Presumably the regimental medal is the “similar award” and was deemed to stand in its stead.

In passing it is interesting to note the differences that exist in various sources for Parkinson’s actual campaign service:

Parkinson’s MGS has nine clasps, but he claimed eleven. His papers do not show presence at St. Sebastian, Nivelle and Nive (all of which he received as clasps) but they do show Badajos and Ciudad Rodrigo – which he did not get, these being disallowed as he was “sick/absent” and the clasps “removed on appeal”. The fact of his absence seems to be supported by the muster rolls. Finally, the Regimental Cross credits him with presence at Talavera in 1809 – which clasp he did not claim; he would have been underage at that time and the musters do not support his presence in Spain that early.

Parkinson went on to serve for nearly 30 years as a Yeoman; their records show that he was present in the Peninsula “in eighteen engagements of which ten were general and eight were skirmishes”. He attended the Coronation of Queen Victoria in June 1838 and the Wedding of the Prince of Wales in March 1863.

Henry Parkinson died on July 19th 1868 and is buried in the  Church of All Saints and St. John, Padiham Rd., Haberghem, Burnley. His tombstone carries a detailed account of his services but it is now in an eroded state, with much loss. What has been recorded is:

IN AFFECTIONATE MEMORY OF / HENRY PARKINSON / OF HABERGHAM. / COLOR SERGEANT ROYAL FUSILIERS / WHO DEPARTED THIS LIFE JULY 19TH 1868 / AGED 78 YEARS / HE SERVED *** YEARS IN THE ARMY /  AND TWENTY *** YEARS AS A YEOMAN OF HER MAJESTY’S QUEEN’S BODYGUARD. HE WAS / THIRTEEN YEARS A COLOR SERGEANT / MAJOR [sic] OF THE 7TH FOOT. / HE BORE A CHARACTER CREDIBLE [sic] TO HIMSELF AND TO THE REGIMENT AND ****** INTENDED TO / UPHOLD THE DISTINGUISHED RESPECTABILITY OF THE CORPS. HE SERVED UNDER HIS GRACE / THE DUKE OF WELLINGTON IN THE PENINSULAR / CAMPAIGN AND HE WAS PRESENT AT THE FOLLOWING ENGAGEMENTS. / ALBUHERA SABUGAL BADAJOS / SALAMANCA VITTORIA RONCE / – VALLES PYRENEES ST SEBASTIAN /  NIVE NIVELLE TOULOUSE / ORTHES. /  ALSO NEW ORLEANS NORTH AMERICA.

More of the inscription has fallen away since this record was made some time ago.

The grave and badly eroded tombstone of Henry Parkinson in Habergham

The Burnley Advertiser of 8th August 1868 carried a large and detailed Obituary.