…. the beginning of a new medallic trend 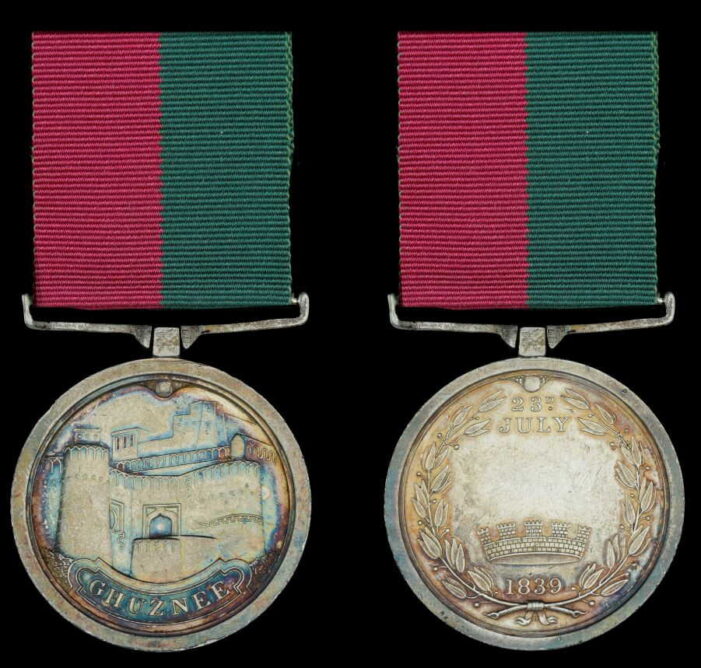 In 1838, when British and East India Company forces began what became a fairly disastrous invasion of Afghanistan, the idea of awarding simple campaign medals to British soldiers did not exist. The East India Company (EIC) had issued such medals to its Indian forces as early as 1784 and went on awarding them for all its major campaigns thereafter, like those for Seringapatam 1799, Egypt 1801, Ava 182-26 and others, but the issue of a Waterloo Medal to British and associated forces in 1815 was more a reflection of the perceived importance of the event rather than a general desire to give medals to soldiers and for a generation after Waterloo there were no awards of campaign medals to British troops.

Since even at this early date, British Indian authorities were concerned with the stability and attitude of their frontier neighbour, Afghanistan, a neutral or pro-British ruler was something to be desired and in 1838, with fears of increasing Russian influence over the Amir, the Indian authorities decided to support the claim to the throne of Padshah Sultan Shah Shuja Durrani (known to the British as Shah Shuja or Shoojah-ul-Mulk). He had ruled Afghanistan from 1803-09 with a decidedly pro-British attitude during the era of French ambitions in the East but was deposed in 1809 and held in captivity for some years. He eventually fled into British India in 1818, where he lived under EIC pension in Ludhiana and attempted his own restoration, with Sikh help, in 1833, but was defeated.

By 1838, the British were ready to support the restoration of the aged claimant and, to cut a long story short, in December a powerful British-Indian force moved via the Punjab against Afghanistan. The grandly named ‘Army of the Indus’ comprised 21,000 British and Indian troops initially under General Sir John Keane and dragged in its wake an immense train of 38,000 camp ‘followers’, 30,000 camels and herds of cattle as food ‘on the hoof’. 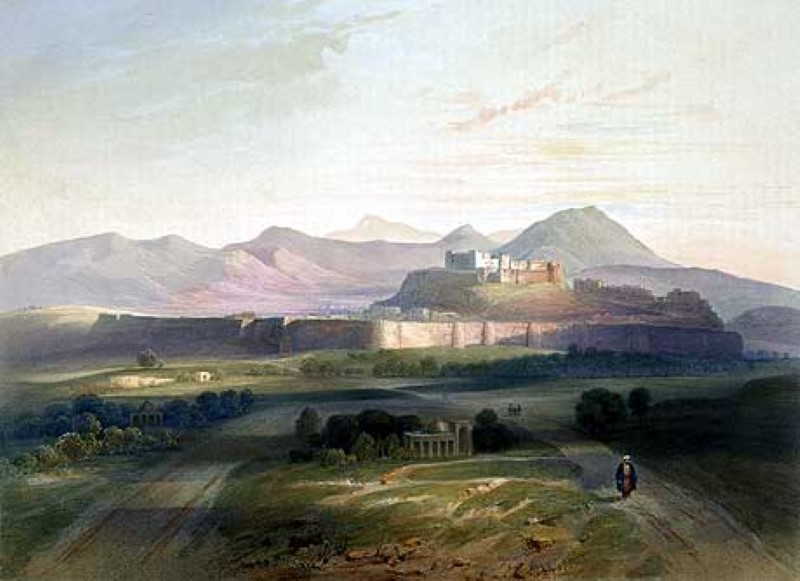 A contemporary watercolour of Ghazni

Skirting the independent Sikh kingdom, the Army of the Indus faced challenging conditions and terrain, including the Baluchistan desert and difficult mountain passes, but despite major problems with food supplies, reached the southern Afghan capital of Kandahar on 25th April 1839. Not until 27th June did Keane continue his onward march and on 23rd July 1839, en route to Kabul, he attacked the fortress-city of Ghazni in what turned out to be, given the strength of the place, a surprisingly easy and effective assault. The city was massively fortified but Sir John learned of one gate that was not well-defended and after blowing it in, his forces fought their way through the city. British losses were about 200 killed and wounded, while the Afghans suffered approx. 500 killed and 1,500 captured. 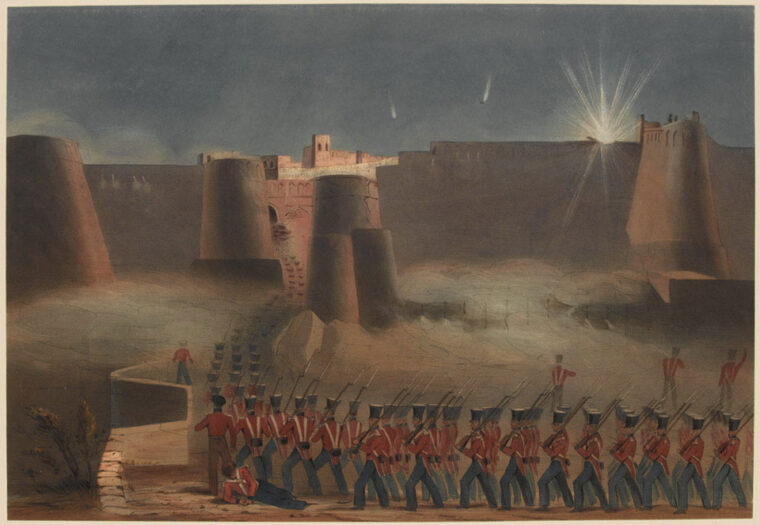 A naive contemporary depiction of the attack

Sir John marched on to Kabul and in August 1839, after a thirty year absence, Shah Shuja was again enthroned in Kabul. It had in fact gone very easily and the British could congratulate themselves that they had, with little loss, established a ‘friendly’ ruler in Kabul. Just how badly things were to turn out is another story!

Shah Shuja announced as early as 30th August 1839 that he would honour those who had fought to restore him by awarding a special medal, more particularly for the single major action, the capture of Ghazni. The awarding of medals was certainly not an Afghan practice and one wonders how far he was ‘persuaded’ by EIC officers! At all events, the Amir announced that he would award a ‘Ghuznee’ medal and steps were taken to produce them via the Indian government mint in Calcutta. 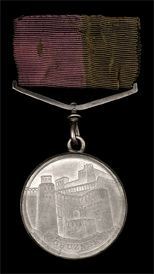 Rare example in pewter. Some are found named

The evidence suggests that the original intention was to follow EIC practice of awarding medals in different metals to different ranks, certainly to Indian forces. There are known (though rare) named examples of pewter or ‘tin’ Ghuznee medals which were presumably intended to be given to sepoys and gold ‘specimens’ which might reflect intended awards to the highest in rank. However, as it turned out, the medals would only be produced in silver for all recipients. One other issue was that ‘Her Majesty’s’ regiments serving alongside EIC forces were also proposed to receive the medal. This was novel – no British soldiers had been awarded campaign medals since 1815 and special sanction from the Queen, as ‘the fount of honour’, had to be sought (and granted in March 1841) before the award was allowed to be made. This established an important precedent, followed, for example, in the contemporary China medal for 1840-42.

The murder of Shah Shuja in April 1842 threw the whole plan into jeopardy and there were many powerful figures in India who asserted that foreign rulers – especially dead ones – should not be responsible for issuing rewards to Britain’s forces. However, the process of producing the medals in Calcutta was well underway by then and the Governor General, Lord Ellenborough, announced in November 1842 that the late Amir’s wishes would be fulfilled, though the medal would now be issued “in the name of the Government of India” and not of Shah Shuja.

Obverse and reverse, with blank panel

Early documents relate to the medal being designed by ‘a committee’ but recent research suggests that the obverse, showing the main gates of 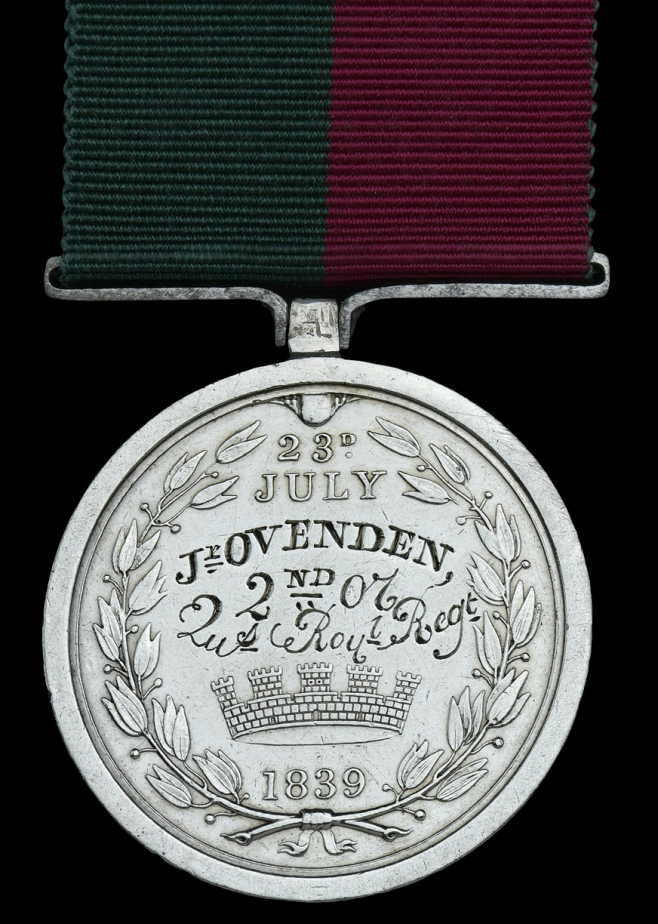 Engraved to the reverse 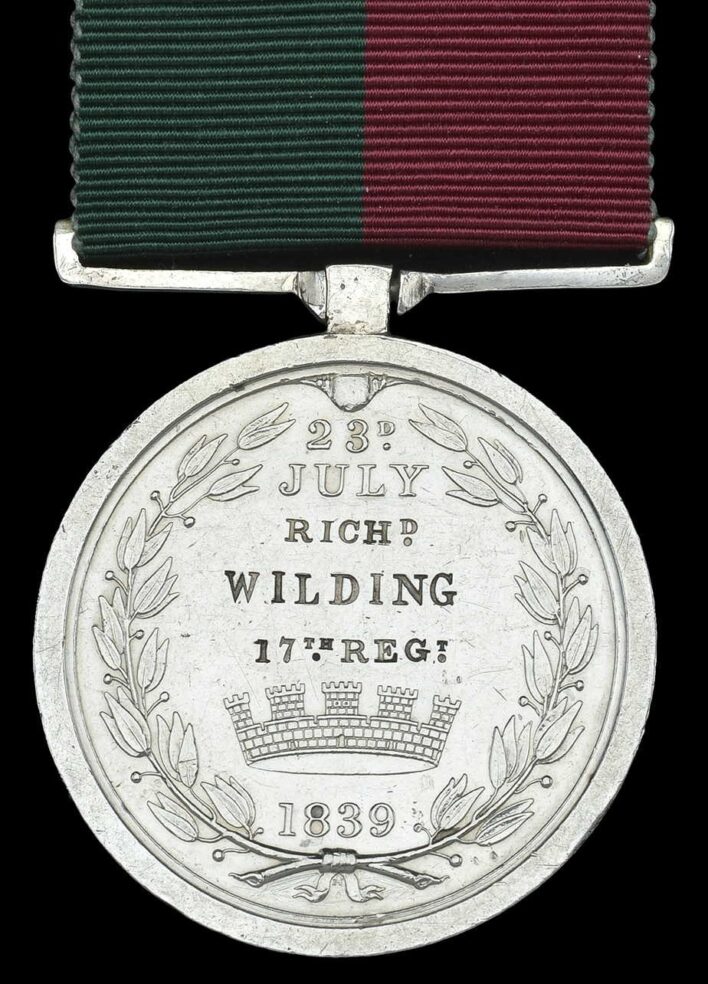 Ghazni, was based on designs by Major John Luard, 30th Foot and/or Henry Durand. Apart from this detailed depiction, the obverse simply has GHUZNEE and no reference (effigy or titles) to a monarch. The reverse features a wreath surrounding a mural crown, the date 23rd JULY 1839 and a central blank to take the recipient’s personal details, which many added. Nevertheless, despite this obvious space, medals are found named around the rim in a variety of impressed or engraved styles and some are found unnamed, where the recipient never entered his details. 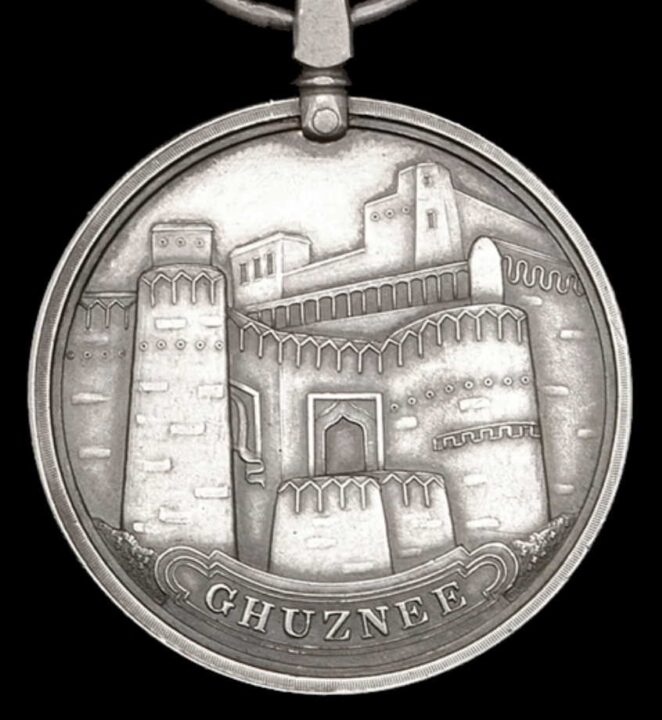 There are slight die variations – some are seen with wider edge flanges than others and some are seen with a well-known obverse design variety, called the ‘tall towers’ type. It used to said that these were simply British-made tailors’ copies for officers and there is some evidence that they were the copies known to have been produced, along with miniatures of the medal, by Messrs. Hunt and Roskell and they are sometimes found to officers of the 17th Foot.

Some medals are found with unofficial clasps, like “Guznee”, “Affghanistan”, “Indus” or the later “Khelat”.

Unlike the Waterloo Medal, suspension was via a straight, hinged bar, sometimes altered by the recipient. The original ribbon was intended to be half green and half yellow and there are portraits of officers wearing this early version but for some reason, the ribbon was changed early on to half dark red and half dark green, the heraldic colours of Britain and of Islam. No date, authority or reason for this change has ever been found. 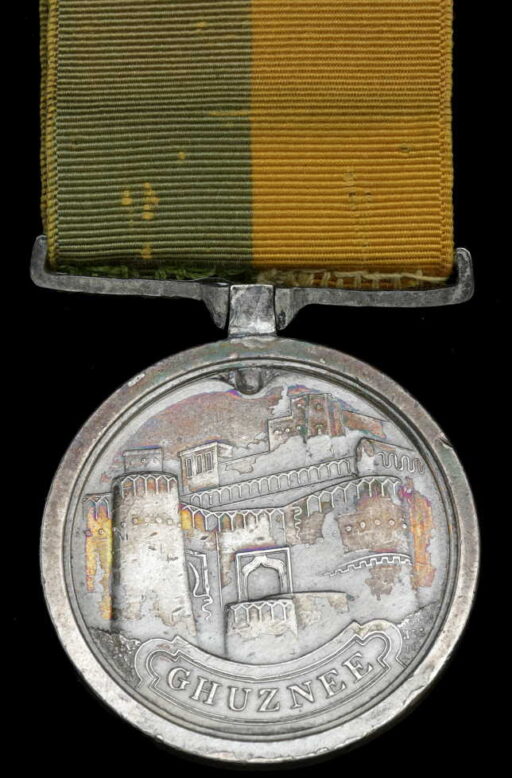 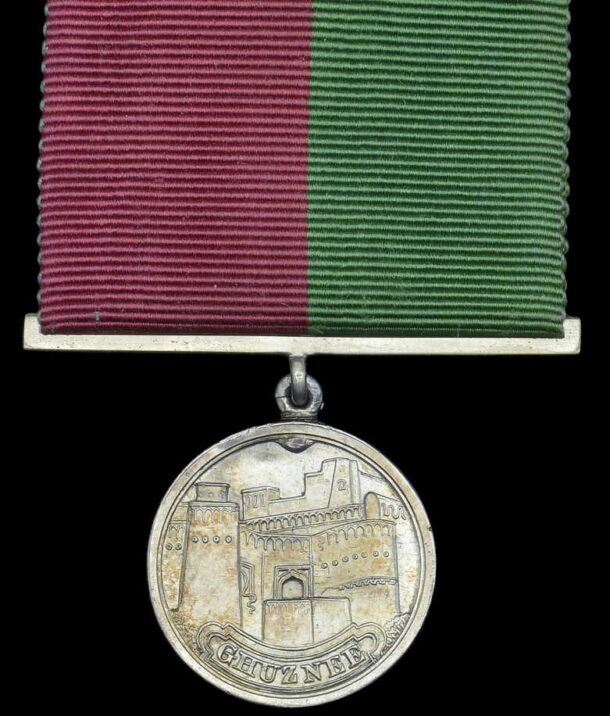 A fairly contemporary miniature, worn (as was often the case) on a full-size ribbon

Approx. 8370 medals were awarded, nearly 7500 of those to Other Ranks, but there is no surviving medal roll. A Prize Money Roll for the taking of Ghazni does exist and at least enables some attempt at verification – those who received the prize money were presumably entitled to the medal! For British regiments, muster and pay lists will also confirm presence or absence during the campaign itself.

This very early medal is quite popular with collectors – as are others for Afghanistan 1841-42 – and nice examples to British Other Ranks retail at around £950; examples to Indian recipients are not at all common, though generally no more expensive, while those to higher ranks are, as usual, more expensive depending on the rank, regiment and career of the recipient and can fetch several thousands of pounds.

The Ghuznee Medal would become the first campaign medal of the reign of Queen Victoria and, with the other medals for the Afghan War 1841-42 and for China 184-42, would set the trend and style for the regular issue of campaign medals which has continued since that time.