The Meritorious Service Medal (MSM) for the Army was introduced in December 1845 and first conferred in 1847, to reward specially long service. The essential requirement was 27 years’ service of a distinctly “meritorious” nature reaching the rank of Sergeant or above, so that it was once referred to as “the Sergeants’ Medal”. Specific MSMs were later introduced for service with the Royal Marines (from 1849), the East India Company’s European forces (from 1848), the Indian Army per se (from 1888), Colonial forces (from 1895), the Royal Air Force (from 1918) and the Royal Navy (from 1919).

The army could be medal was awarded with a one-off gratuity or with an annuity of up to £20 for life but since the fund conferring the monetary rewards was limited and fixed, there were always more potential recipients than medals actually awarded – it tended to be a matter of “dead men’s shoes” as recipients waited for a monetary reward to become available and some men, recommended after a long career, could wait decades for the actual medal.

The MSM was always sparingly awarded and examples of the Victorian MSM are not so common and there are examples of Victorian MSMs awarded not for long service but as “campaign awards” for good service – examples are known from the Crimean War, when a Royal Warrant of 1854 allowed the MSM to be given as an “immediate” award, though there seems to have been some confusion (especially when the DCM was instituted later in 1854) as to which award might be appropriate. 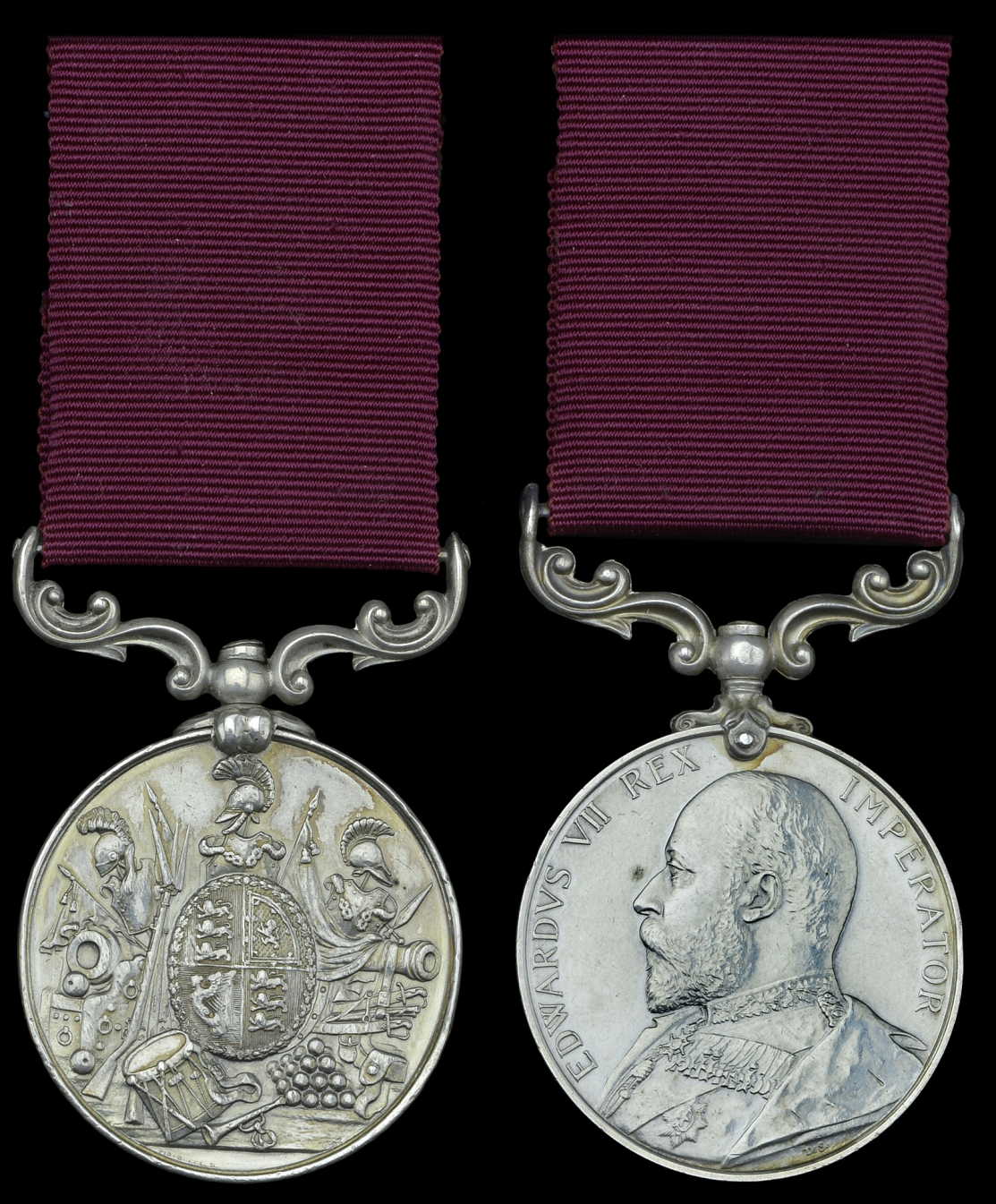 At first, it was not possible to wear both the Army Long Service and Good Conduct Medal and the MSM, so recipients of the former had to surrender the Long Service medal and wore simply the MSM (and any campaign medals they had earned). However, in 1902, this requirement was cancelled and it became possible for one recipient to wear both the LSGC and the MSM. Indeed, cases are known of men who then re-claimed their “surrendered” LSGC, so that pre-1902 groups are seen with both awards, the LSGC often having “later style” naming.

However, with the extension and development of “the Great War” after 1914, it became apparent that many men were rendering outstanding service in all sorts of areas and theatres of war, not necessarily in combat conditions or immediately “before the enemy”. Examples are work with administration, transport, supply, prisoners of war, medical services, recruiting and training and many others. So in 1916 it was decided to extend the award of the MSM to “immediate” circumstances without the “long service” element being regarded, so that deserving soldiers could be rewarded very quickly. At the same time, in 1916, the ribbon of the MSM (and the Army LSGC) was altered to avoid confusion with that of the Victoria Cross – the MSM was altered from plain crimson to crimson with three white stripes and the Long Service from plain crimson to crimson with white edges. 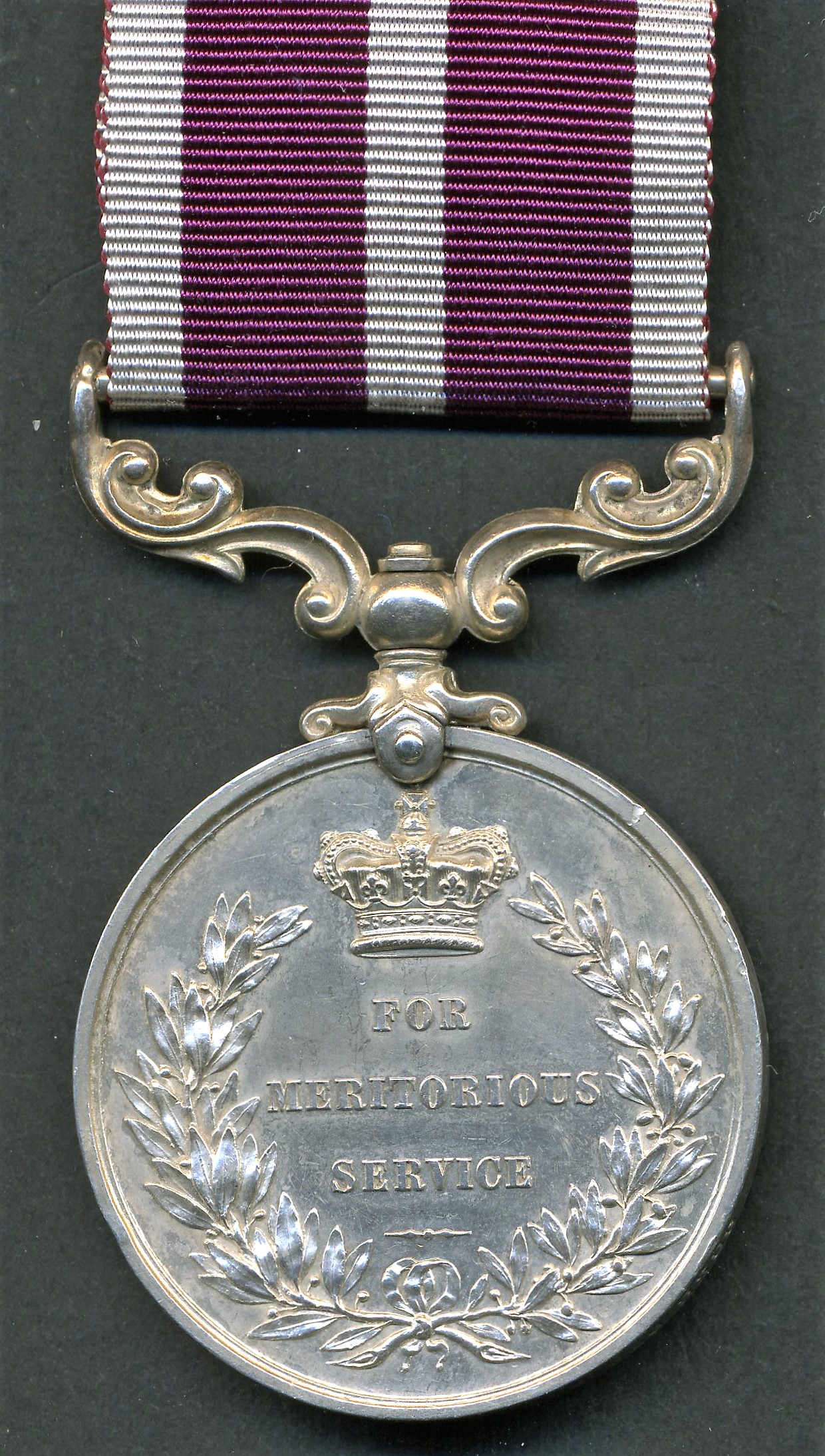 In 1917 it was also decided to award a “gallantry” version of the MSM for those who showed gallantry in circumstances in which a particular military award might not be appropriate – although the lines could be blurred. Examples are those granted for putting out fires in ammunition dumps, rescuing people from burning buildings, dealing with bomb or grenade accidents and other incidents where gallantry was displayed out of the front line. Bars could be awarded for subsequent actions with both types, but only six were ever conferred to the “immediate” type and only one to the “gallantry” type.

This new development of the MSM, away from its original long service function, continued until 1928 when the award of the “immediate” and “gallantry” MSMs ceased. The British Empire Medal and other awards within the Order of the British Empire (1917) really took over much of role of the “immediate” or “gallantry” MSMs. The army MSM then reverted solely to its old function as a long and meritorious service award.

The army medal bore on its obverse the profile and titles of King George V in Field Marshal’s uniform, while the reverse (that of the 1845/47 original) simply bore a wreath surmounted by the imperial crown, enclosing the words “For / Meritorious / Service”. There is no distinction at all in the design of the medal or the ribbon of the “immediate” or “gallantry” versions; only the detail in the London Gazette, in which all awards were published, or another printed source (like regimental records) will identify the “gallantry” type or explain the circumstances. The “gallantry” awards are not common on the market. 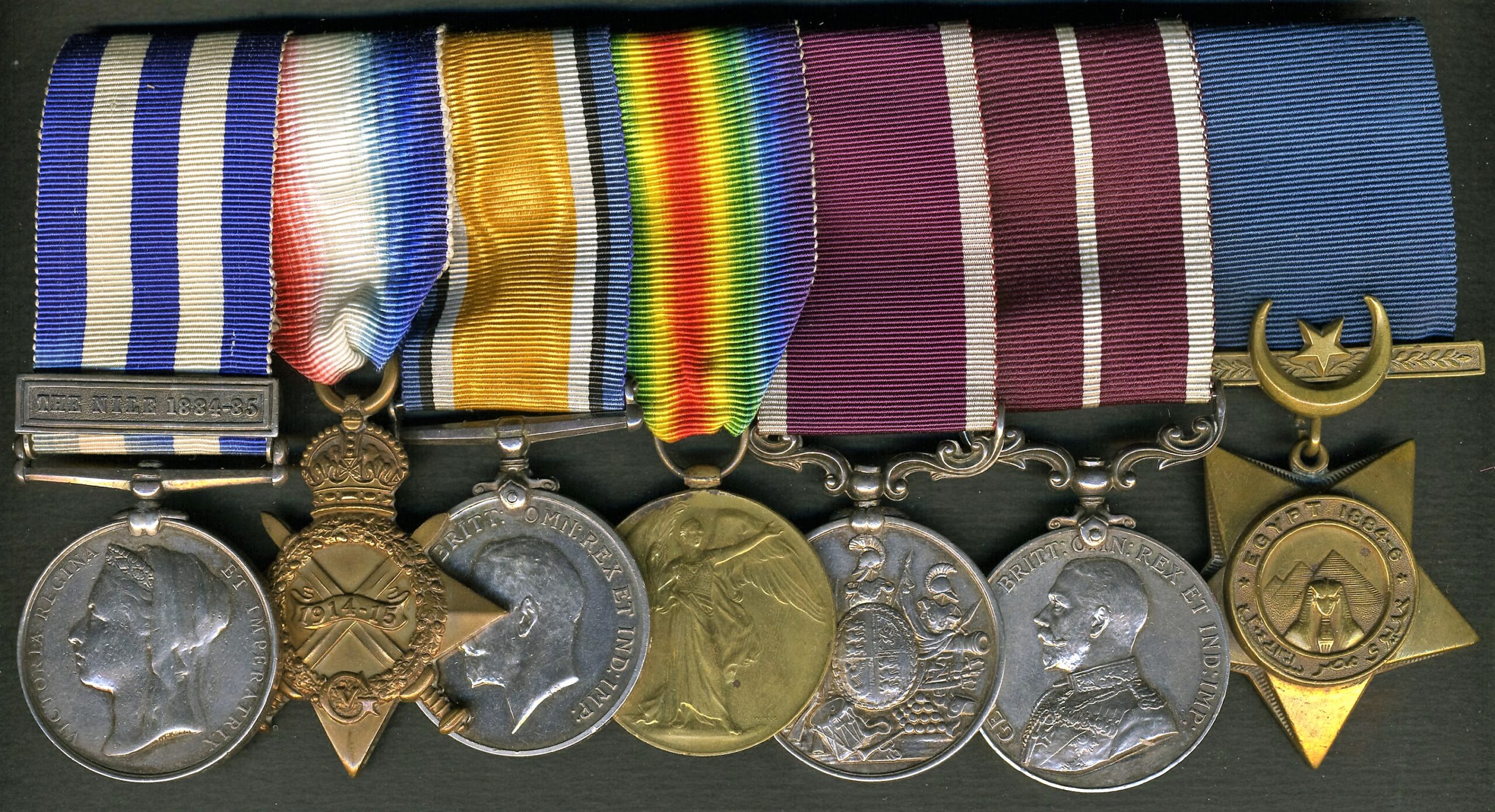 An “immediate” MSM for WW1 with a group representing very long service in the R.E. Note Victorian LSGC on 1916 ribbon

For the collector, the appeal of the “immediate” MSM is that examples can be found to just about any military unit (including those of the Commonwealth, excluding India, which had its own distinctive MSM) and for just about any service area in the world. Apart from the more numerous awards to the main combat theatres and the UK, MSM awards are found (to give just a few examples) for Bermuda, South Africa, Bushire, East Persia, India, Waziristan, the North West Frontier in general, Singapore, Aden, Transcaspia, Russia etc. and for prisoner-of-war service in Germany or Turkey. Needless to say, awards for some of these areas were made in very small numbers and examples are rarely seen.