From its opening in 1869, the Suez Canal became a vitally important economic and strategic link in the chain between Britain and her distant empire in India, the Far East and Australasia, cutting out the need for the long sea route around Africa; it was equally important for defensive and similar imperial reasons to the French. It was this significance which led the Disraeli government to purchase a major shareholding in the Canal in 1875 and which ultimately led to a British invasion. Successive recent rulers of Egypt (the Khedives or “princes”, technically acting as viceroys on behalf of their overlord, the Ottoman Sultan) had bankrupted Egypt in their attempts to modernise and westernise the country. The result was the immensely unpopular imposition of an international (largely European) debt commission to supervise Egypt’s economy and enforce cuts in government spending, to ensure the repayment of her debts to European banks (where have we heard this before?). This clear foreign intervention in Egypt’s government was greatly resented and when financial cuts and reductions were imposed on the army, a full-scale military uprising was the result. In 1881, Colonel Ahmed Urabi led an army coup against the Khedive, Tewfik, and his foreign-dominated government and seized power. To Britain and France, the issue then became not one of simple debt repayment but of the security of the Suez Canal. Anglo-French military action against Urabi was quickly threatened but the French, in the grip of their own political crisis, backed down leaving a reluctant anti-imperialist Liberal Prime Minister, William Gladstone, to order a British response. The Royal Navy bombarded Urabi’s defences at Alexandria on 11th July 1882 and in August, a British expeditionary force under Sir Garnet Wolseley landed in the city. Quickly moving his main strike force into the Suez Canal and then inland, Wolseley rapidly and efficiently destroyed the Egyptian army at Tel-el-Kebir on 13th September. Britain then found itself in effective control of Egypt – an occupation which, despite Gladstone’s oft-repeated assurances, was not limited to simply restoring the Khedive and stabilising his government and finances but which drew Britain further into involvement as the neighbouring Sudan was gripped by a fundamentalist Islamic movement which itself threatened Egypt. 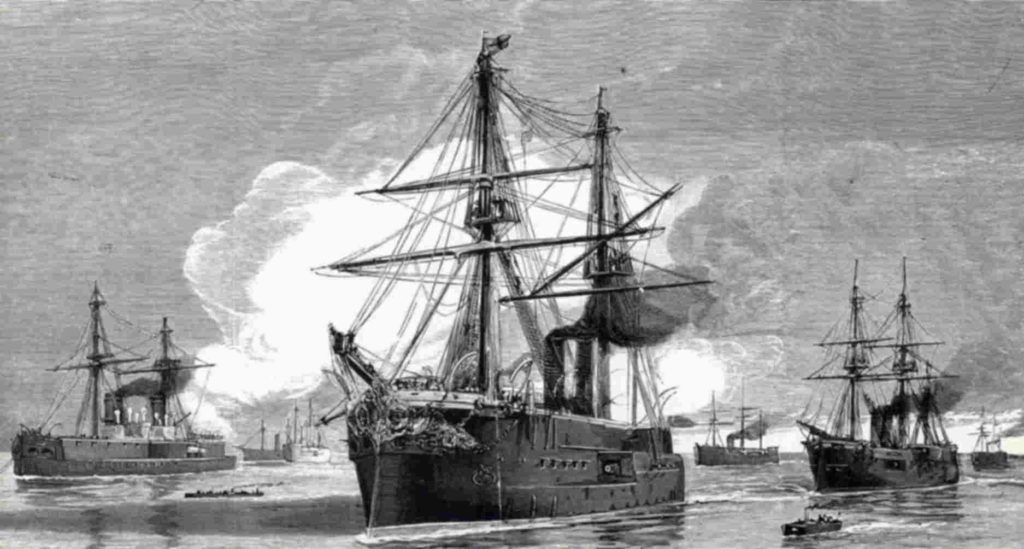 All the troops, British and Indian, and Royal Navy and Royal Marine forces which took part in the invasion in August-September 1882 were awarded the silver Egypt Medal, its reverse featuring a rather chunky profile of the sphinx, over the date 1882. But since Britain was – technically at least – acting on behalf of the Khedive of Egypt, it was announced that he would award each participant an Egyptian medal to reward their service.

This medal was the Khedive’s Star. It took the form of a heavy bronze star, with the sphinx and pyramids on the obverse, surrounded by the legend Egypt 1882 and (in Arabic) Khedive of Egypt and Islamic AH date. The reverse was plain, except for a sunken central roundel carrying the crowned TM monogram of the Khedive (i.e. Tewfik Mohammed). 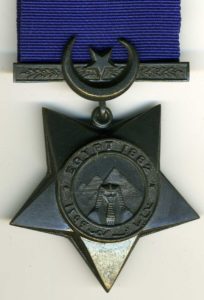 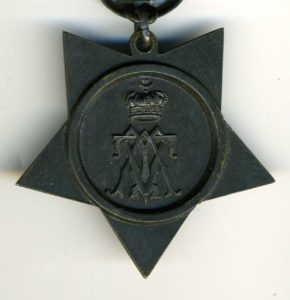 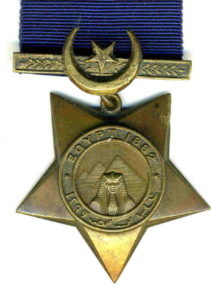 The Star polished –  as often found.

The star was suspended from a dark blue ribbon via a laurelled bar with central crescent-and-star motif. As originally issued, the bronze stars were chemically darkened so that they looked black, but they are rarely found in their original state; since most were polished by their recipients over years, they are more often seen in a brassy gold colour or similar. The contract to manufacture the Stars was given to Messrs. Henry Jenkins and Sons of Birmingham, then of the Unity Works, Vittoria Street, Birmingham, who were “general stampers and piercers” and well-known as brass-founders and medallists. Some – but not very many – are found with the manufacturer’s name on the reverse lower arm but why some did and some did not carry this mark is unknown. 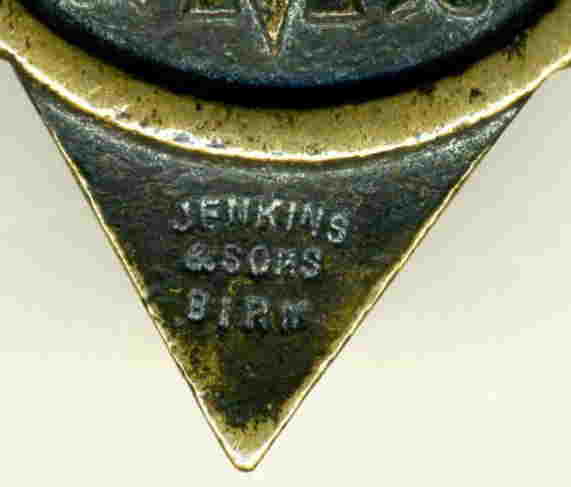 The medals were issued unnamed, but as is frequently found with unnamed medals, many are found privately engraved with the recipient’s details on the reverse; a few regiments seem to have provided fully-detailed depot impressed naming whilst some, mainly Guards’ regiments, 2/DCLI and a few others – are found depot impressed with just the soldier’s regimental number and abbreviated unit (e.g. “208 GG” to a man whose number was 208, serving in the Grenadier Guards) or sometimes with initials in addition.

Since British involvement in Egypt drew her into military action in the Sudan after 1882, the stars were issued, with suitable alterations of date, for later campaign up to 1891. In all four different types were eventually produced:

Awarded to British and Indian soldiers, to Royal Navy recipients (serving in land operations ashore or at sea off the coast) and to Royal Marines who took part in the campaign of 10th July – 14th September and who received the dated British silver medal.

Awarded to British and Indian soldiers, to Royal Navy recipients (serving ashore or in support off the coast) and to Royal Marines who took part in operations based on the Red Sea port of Suakin between 19th February and 26th March 1884 and who received the undated British silver medal. Some severe actions were fought during this phase of the occupation of Suakin.

Awarded to British, Indian and (for the first time) Australian soldiers and to Royal Navy recipients (serving in land operations ashore or off the coast) and to Royal Marines who took part in the campaigns between 26th March 1884 and 7th October 1886. These included the operations around the Red Sea port of Suakin from March-May 1885, various actions along the Wadi Halfa frontier (e.g. Ginnis in 1886) and the major campaign waged along the Nile from October 1884-March 1885 in the unsuccessful attempt to relieve General Gordon at Khartoum. Australian units – infantry, artillery and medical – which served at Suakin in 1885 were the first imperial troops, apart from Indian, to serve alongside British forces on campaign. 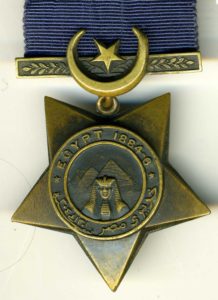 The undated star – the wording rather cruder than on earlier versions – was awarded to British military and naval forces, regiments of the reformed Egyptian army under British officers and newly raised Sudanese units, in later operations in the Sudan e.g. near Suakin at Gemaizah in 1888 and at Toski in 1889. 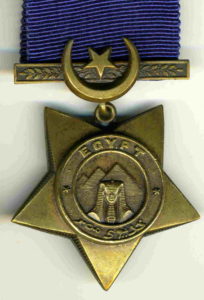 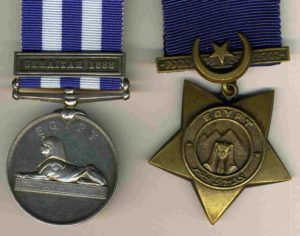 It should be noted that a recipient could only receive one Khedive’s Star – for the first campaign in which he had served – so that one sees Egypt medals with much later clasps but with the 1882 or appropriate Star. The Star was not awarded by itself, but only with the British silver medal – though there are known cases of men forfeiting the Khedive’s Star for some misdemeanour but still receiving the British award. The only exception to this rule was for the action at Tokar on 19th February 1891. This was mainly an Egyptian army affair, but naval brigades from HMS Dolphin and Sandfly were landed and engaged; for some reason, soldiers and naval recipients involved in this action were not given the British silver medal, but the Khedive conferred the undated Star with clasp Tokar (its inscription entirely in Arabic) to commemorate the victory. This was the only clasp awarded to the Khedive’s Star and the only occasion in which the Khedive Star could be worn without an Egypt medal; those recipients who already had an earlier Star simply received the Tokar clasp – but examples of this usage are rare. 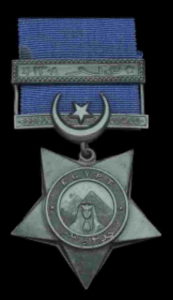 The Khedive’s Stars are by no means rare or costly – especially the 1882 and 1884-86 types – but they represent an interesting continuation of the notion of “allied awards” to British and imperial personnel, a tradition begun with the naval St. Jean d’Acre medal of 1840 and the Turkish Crimea medals of 1854-56. 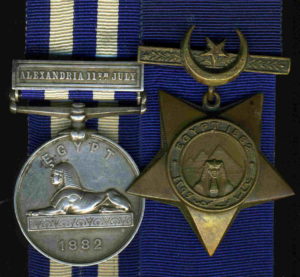 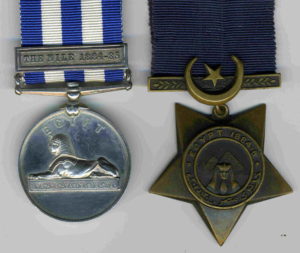