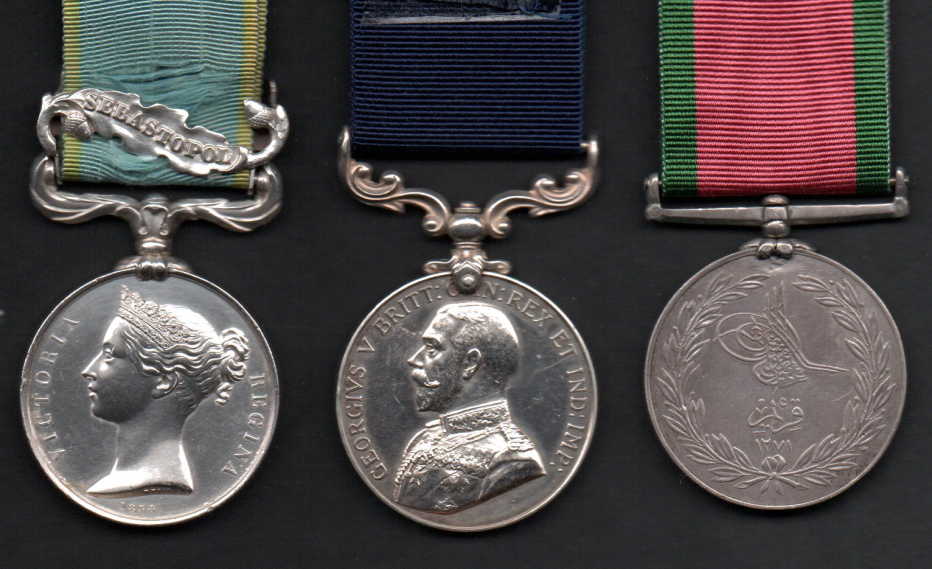 Joseph Hetheridge was born in Old Portsmouth in 1839 and enlisted in the Royal Marine Artillery in May 1854 at the tender age of 15. He was posted almost immediately to the brand-new screw steamer Royal Albert, soon to be flagship of the British fleet operating in the Black Sea. Royal Albert was a fine, new warship – launched in 1854, she was a three-decker mounting 121 guns and the largest and most powerful warship afloat at that time. Ships like this were huge floating fortresses, the most impressive weapons of their day and the finest (and last) development of the old “wooden walls” that had dominated the seas for centuries. She must have been a very impressive “first appointment” for a 15 year old! 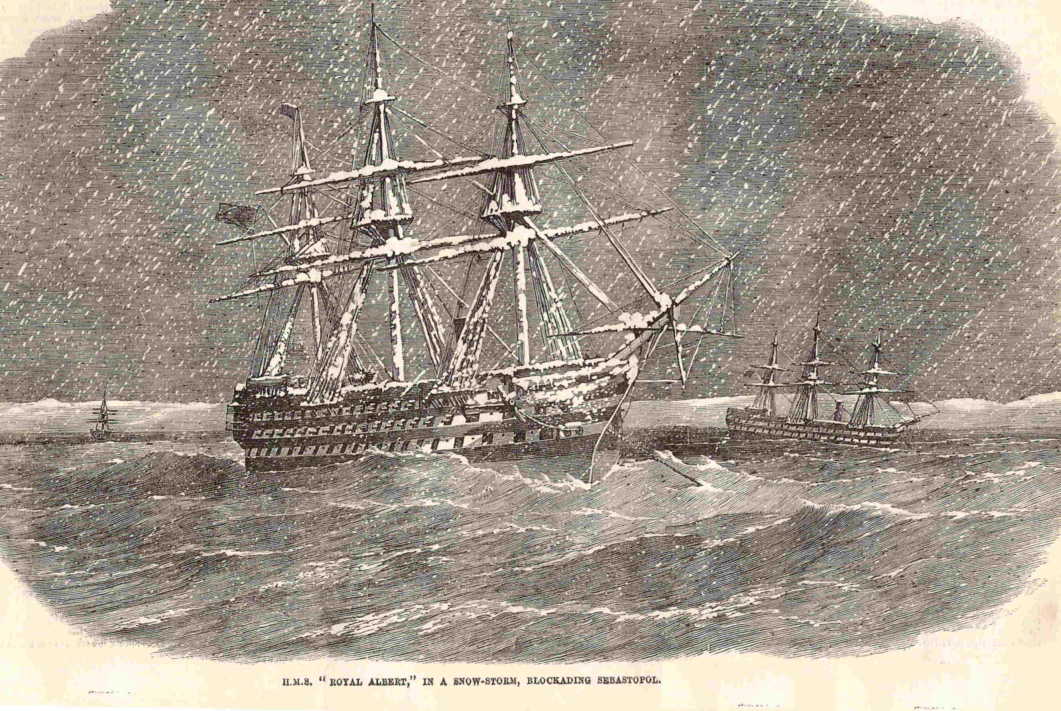 Royal Albert during the terrible winter of 1854

When Rear Admiral Sir Edmund Lyons replaced Vice Admiral James Dundas as commander of the British fleet in the Black Sea in December 1854, Royal Albert was chosen as his flag-ship.

Royal Albert played no part in the great (and unsuccessful) naval attack on the sea forts at Sebastopol on 17th October 1854, but led the powerful fleet of 60 British and French warships (carrying 18,000 soldiers) dispatched to seize the Straits of Kertch and Yenikale in May 1855 – the precursor of the successful naval campaign in the Sea of Azoff. Later in 1855, some of the “ship’s boats” (light cutters etc.) of Royal Albert and larger warships which could not themselves operate in the shallow waters of the Sea of Azoff were amongst those which served briefly in the Sea of Azoff – though Hetheridge was not with them. For the rest, the actual deployment of warships around the shores of the Black Sea was limited – there was little to attack (or deemed worth attacking) and for most of the time the British fleet was reduced to the fairly dull round of troop carrying and convoy escort from the Bosporus to the main British naval base in the Crimea at Balaklava. 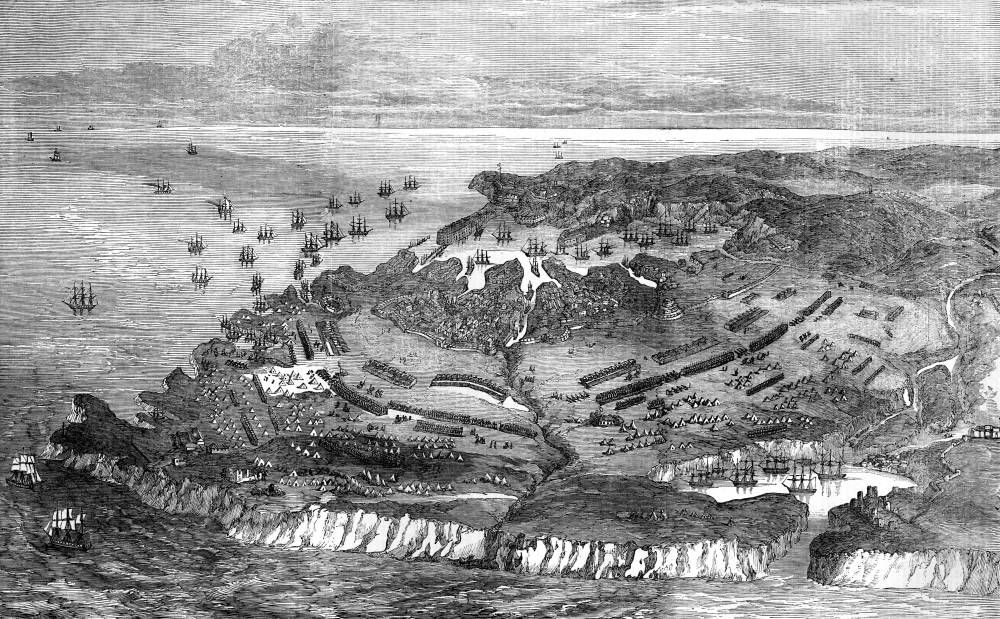 The Sebastopol siege lines – an overview

Hetheridge, however, may have escaped even those minimal sea-going duties. Since he was later awarded the Crimea medal with clasp Sebastopol he was presumably part of the Royal Marine contingent landed from the fleet to serve ashore. He was listed as a Drummer on the medal roll. As early as September 1854 – only two weeks after the allied expeditionary force landed in Kalamita Bay – it was suggested that a powerful Naval Brigade should be landed for shore service, using heavy guns temporarily removed from the major warships and supported by “Blue Jackets” and Royal Marines. The initial RM contribution was 25 Officers and 988 Royal Marines under Lt. Col. Thomas Hurdle, landed on 29th September, followed a few days later by another 10 Officers and 212 men. Eventually, a force of no fewer than 2,400 British sailors and 2,000 Royal Marines was landed at Balaklava, the Marines formed into RM battalions. 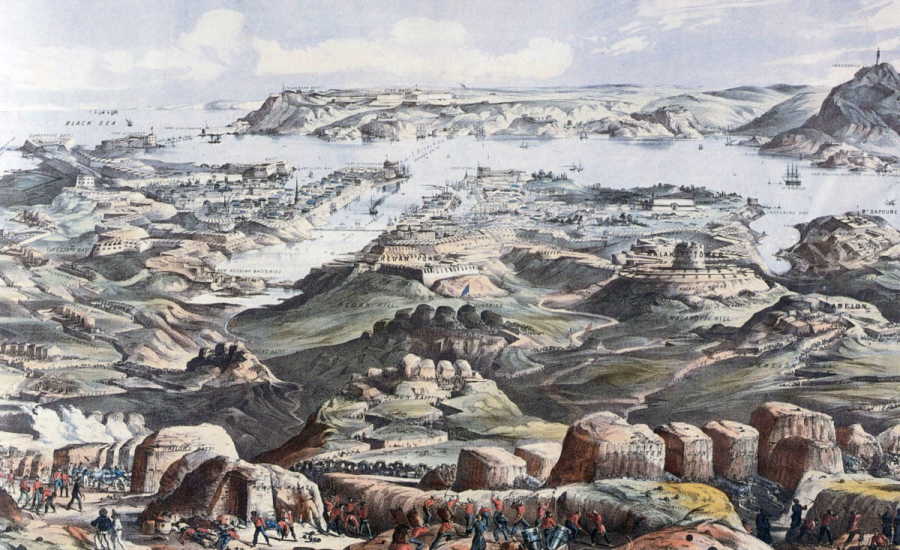 From the siege lines …

Most of the Marines were positioned in a wide cordon around Balaklava, taking in the village of Kadikoi, and constructed defensive lines of trenches, gun positions and embankments (known as “Marine Heights”) forming a peripheral defence for the British port. It was this perimeter which was attacked by Russian cavalry during the battle of Balaklava on 25th October 1854 when they were famously deflected by Sir Colin Campbell’s “thin red line” of 93rd Highlanders and the scratch “battalions of detachments” raised from men in the port. The Marine Artillery on the “heights” had plenty of targets that day, as Russian cavalry massed in the valley before them, and their 24 and 32 pounder shells caused significant casualties.

Apart from these positions, some of the Marine Artillery, under Major Alexander, manned the naval guns which had been mounted as part of the artillery force bombarding the city and served, on a rota basis, throughout the siege; it is presumably this force in which Hetheridge served and earned the Sebastopol clasp. 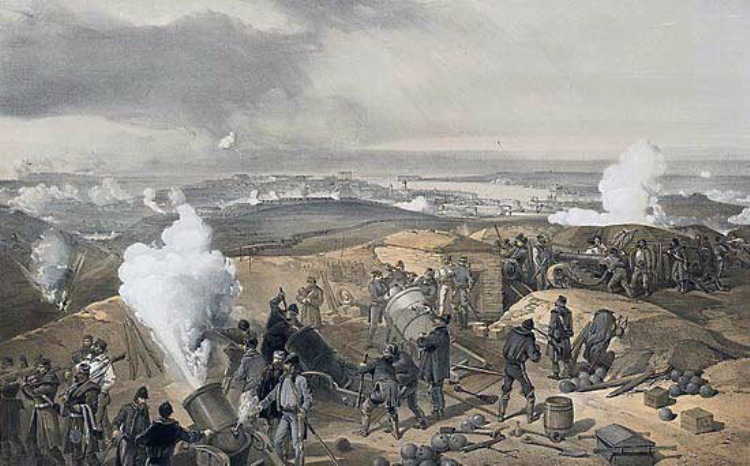 A British Mortar Battery “before Sebastopol”

After more than a year ashore, the Naval and RM contingents which had formed part of the siege force were ordered to return their ships on 11th September 1855 – the day after Sebastopol was entered by the allies following the last assault on 9th September. On the 17th, amidst great cheering, flag-waving and the sound of regimental bands to see them off, they embarked at Balaklava and left the land theatre, having received the “hearty thanks” of the Commander in Chief, General Simpson. Of the approx. 4,500 RN and RM personnel who had landed, 8 officers and 95 men were killed and 38 officers and 437 wounded.

The bombardment of Fort Kinburn

Hetheridge was presumably back aboard Royal Albert for her last significant action during the war – the Allied attack on the forts on the spit at Kinburn, far to the west of the Crimea, guarding the estuary of the Dnieper. Another very large force – 80 British and French warships, led by Royal Albert and carrying 9,000 troops – was dispatched to crack this particular nut and did so after a massive naval bombardment of the forts from north and south on the 15th October 1855. Some of the men of Royal Albert went ashore with fire and rescue parties to put out the fires in the damaged forts and rescue stores and equipment. All this was a month after the fall of Sebastopol and was the last major action of the Russian War in the Black Sea; it was almost expected that it would lead to a new land campaign along the Dnieper, striking into southern Russia, but in the event, nothing was done before a peace treaty was concluded in 1856. It is recorded that when Royal Albert returned to Constantinople after the campaign, Hetheridge was one of the ship’s Guard of Honour formed to welcome a visit by the Sultan. 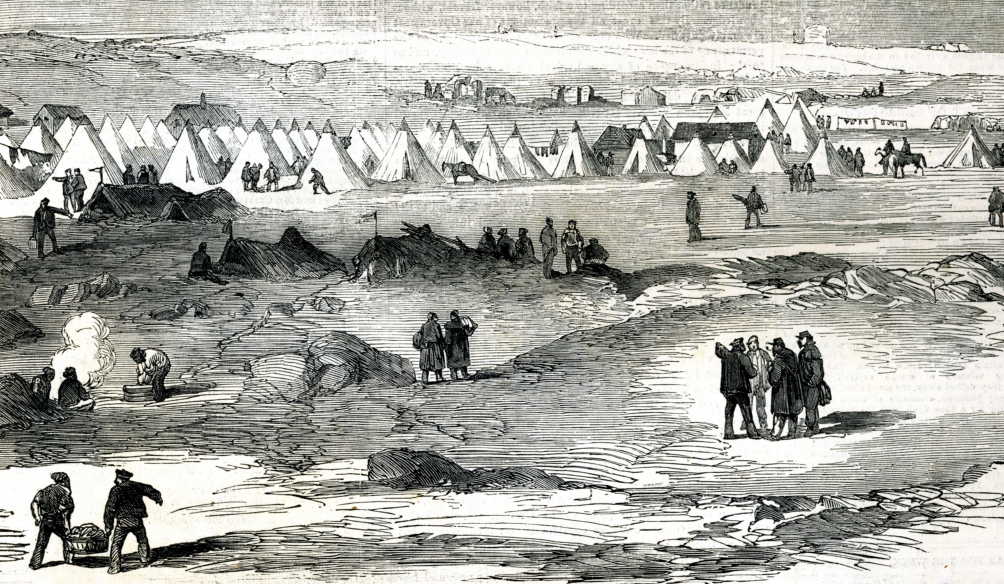 This ended – as it turned out – Hetheridge’s first and last taste of war. All this had taken place at the very beginning of his career – he was only 16 when it ended – and he went on to serve in the RMA until 1878, finally being discharged as a Sergeant after 24 years’ total service, 21 years “of age”. Obviously a man to whom the Marines represented his life, Hetheridge did not stray far from them when he “retired” in 1878; in 1881, he got a job as a nurse at the RMA hospital in Portsmouth and worked there for another 18 years, finally leaving in 1899. There is no trace of an award to him of the Naval Long Service and Good Conduct medal, though fully 43 years after he retired from the RMA he was to receive in 1919 the Royal Marines Meritorious Service Medal, one of only about 35 known with the “Field Marshal” obverse. Its is named to him in No. 6 Company, RMA.

But the Crimean War was to linger. For some unknown reason, although Hetheridge duly received his British medal and clasp for the Crimea, his Turkish Crimean medal never arrived. It must have rankled with him since he made representations in later years to try to get the medal he was entitled to. Eventually – in July 1913! – his local MP, Bertram Falle (later Lord Portsea), who not unsurprising took a great interest in naval matters, took up the case and arranged with the Ottoman authorities for the presentation of this long-delayed award. Hetheridge, then aged 74, was taken to the Turkish Embassy in London, under the patronage of the M.P., and was presented with his Turkish Crimea by the Ottoman Ambassador, H.H. Prince Tewfik. Only 57 years after the Crimean War had ended! Better late than never.

The old man was then given a tour of the House of Commons and invited to afternoon tea! A photograph taken around 1920 shows Hetheridge wearing all three of his medals; there cannot have been very many men alive then who wore the Crimean Medal with the George V MSM! 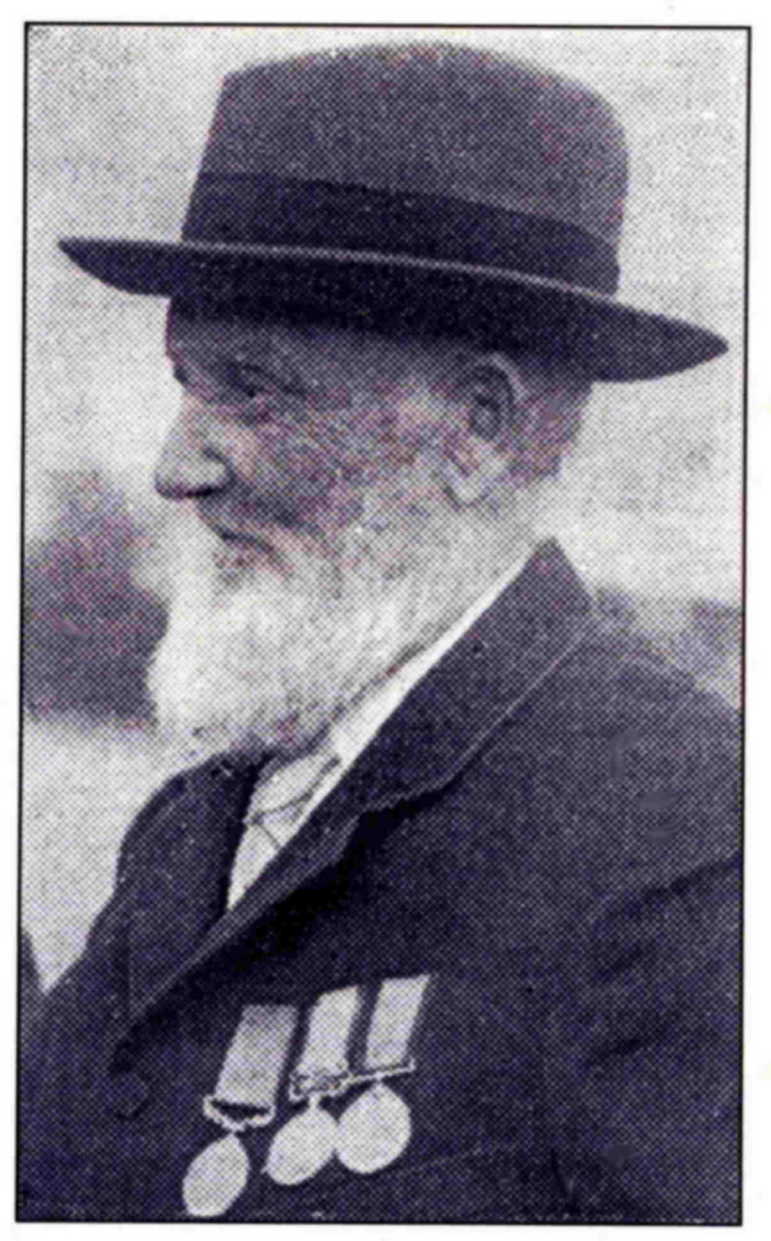 Hetheridge attended several local events in his later years and, judging by his appearance in local newspapers, was clearly something of a local “celebrity” as an old Royal Marine of the Crimea. He lived in the same house in Southsea – 18, Highland Terrace – for over 50 years and died there on 31st March 1931. It was said that his house contained “many interesting relics of bygone days, including a fine model he made in his spare time of HMS Warrior, the first ironclad in the British navy. He had served on this ship when it went to escort Princess Alexandra from Denmark for her marriage to Prince Edward in 1867″.

Hetheridge was buried in the nearby Highland Road Cemetery. It was widely reported in the local press and elsewhere that he was the last known survivor of the Royal Marine force which had served “before Sebastopol” 77 years earlier. It’s satisfying to know that in the end he did, although very belatedly, get his two medals for the Crimea! 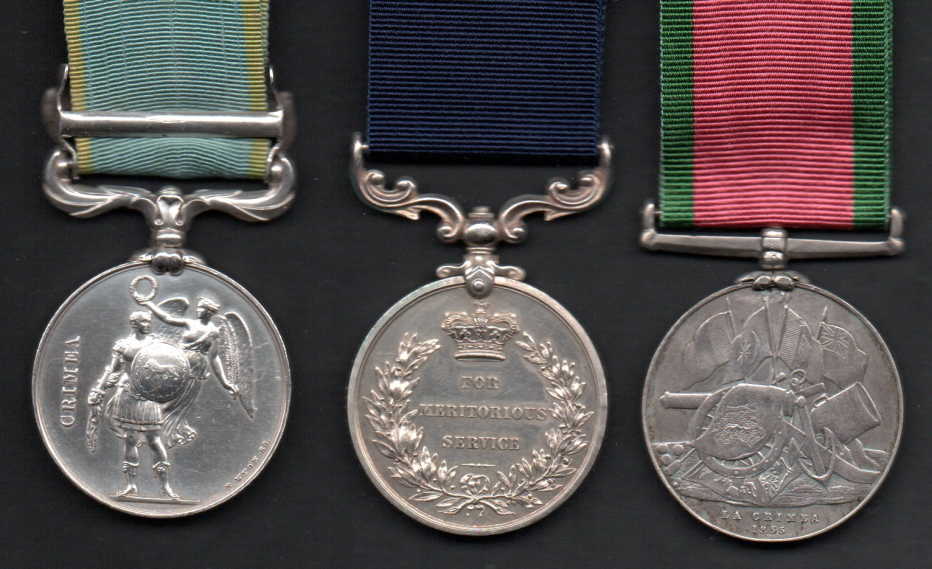