The role of the merchant and fishing fleets in both World Wars has very much taken a back seat when accounts of the war have been written. We perhaps tend to forget the great losses suffered by Britain’s huge merchant fleet (eventually organised in large, defended convoys to help combat the growing U-Boat threat) and the crucial role it played in the transport of troops, food stuffs and materiel across the world and from war zone to war zone. 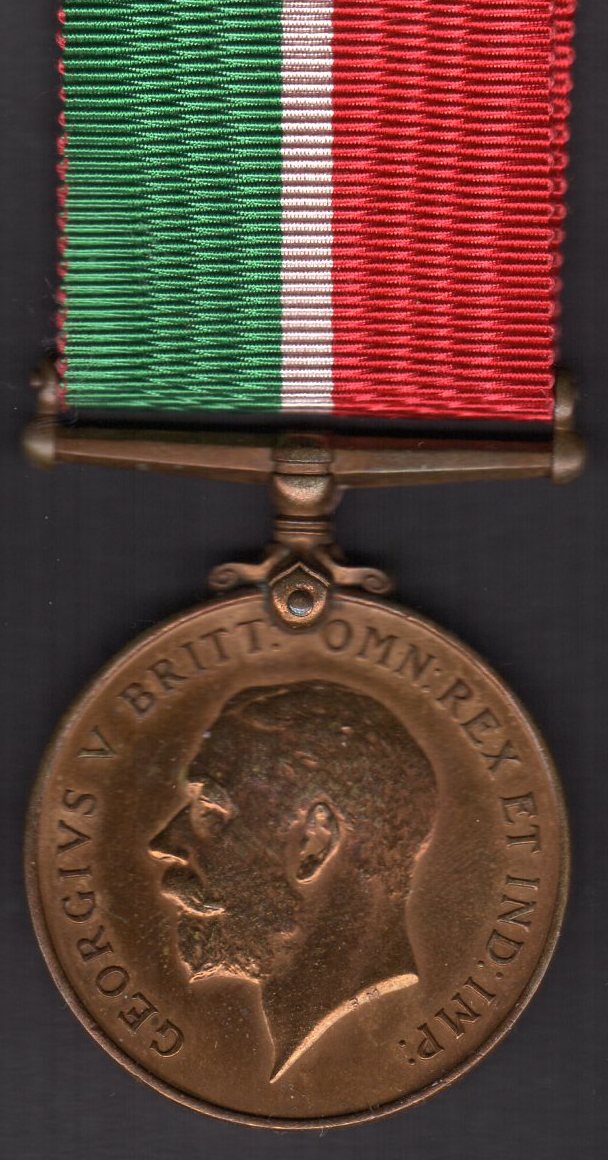 We perhaps also forget the equally important role played by Britain’s fishing fleets which continued to operate throughout the war, since the maintenance of food supplies was vital; this work, dangerous and difficult work at any time, was made even more hazardous by the threat of enemy attack by submarines or surface raiders and by minefields. Many merchant navy personnel also served in other roles – like the Merchant Fleet Auxiliary, minesweeping, tugs, drifters, lightships, lighthouses, pilotage etc. – as well as in other maritime services. The Commonwealth War Graves’ Commission records over 15,600 deaths in the merchant navy during the war – without reference to the large number who would have been wounded, injured or traumatised as a result of their service.

To reward these vital services, the Mercantile Marine Medal was instituted in July 1919 and awarded under the auspices of the Board of Trade. The medal dies were produced by the Royal Mint but all the medals were manufactured in Woolwich Arsenal. It was granted for “for one or more voyages through a designated war zone or danger zone” – though clearly, most recipients would have done more than one voyage. The medal is circular, of standard dimensions (36mm diameter) and made in bronze, with a straight, non-swivelling suspension – like that on the British War Medal . It bears on the obverse the uncrowned or “coinage” head of George V by Sir Bertram McKennal with the usual titles. 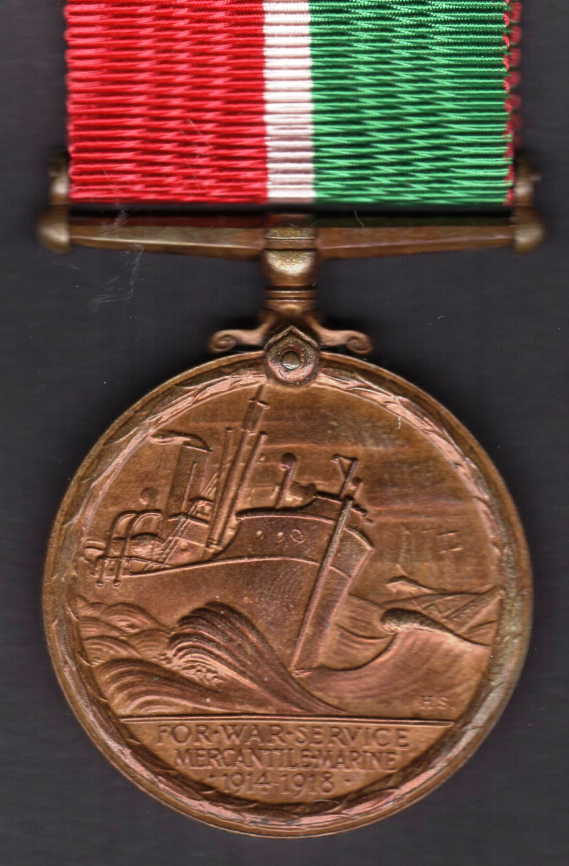 The reverse, the work of Harold Stabler, has generally had a bad press in terms of design (“not particularly artistic” according to Taprell-Dorling), but it is in very much “of its time” and is in fact a striking scene. It shows a merchant vessel ploughing through a heavy (or “angry”) sea, with, in the right foreground, a sinking or diving submarine and in the distance (right) a sailing vessel. It carries the legend “FOR WAR SERVICE/ MERCANTILE MARINE/ 1914-18”, the whole design surrounded by a narrow laurel band. Harold Stabler (1872-1945) was, in his day, a well-regarded and prolific sculptor, metal worker, silversmith and medallist who did (for example) quite a lot of artwork for London Transport and on the London Underground in the 1930s; he is now very much neglected as an artist.

The medal was never awarded by itself but always accompanied by at least the British War Medal (left), though of course those recipients who had other war service could qualify for other WW1 medals (e.g. if they also served at any time in the Royal Navy, Merchant Fleet Auxiliary or in the Army etc.). Thus, the Mercantile Marine medal may be seen with the British War and Victory Medals or with the 1915 Trio – these four medals representing the largest number of campaign medals that could be worn by one recipient for 1914-18 war service. 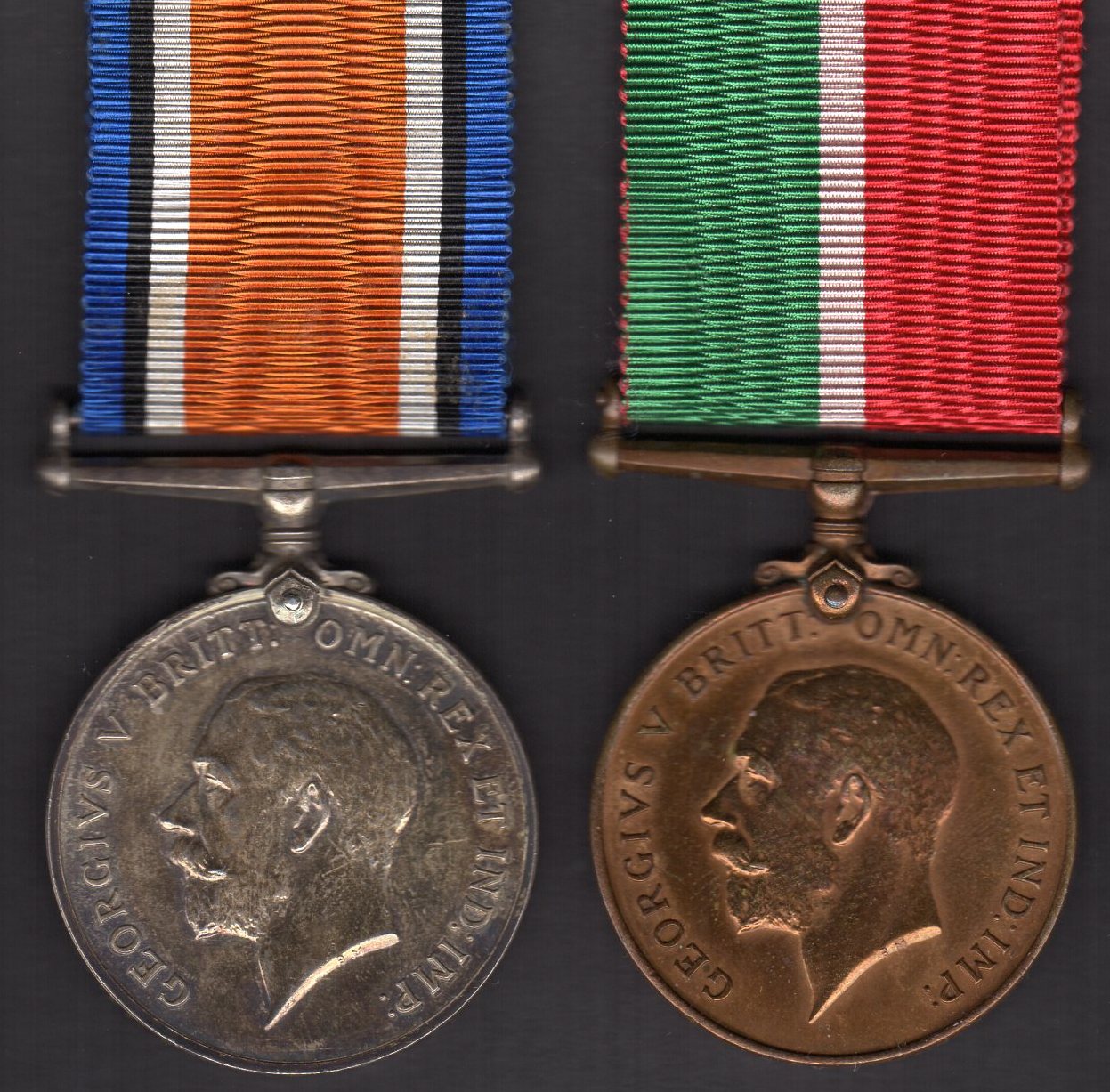 In pair with British War Medal – as usually seen. 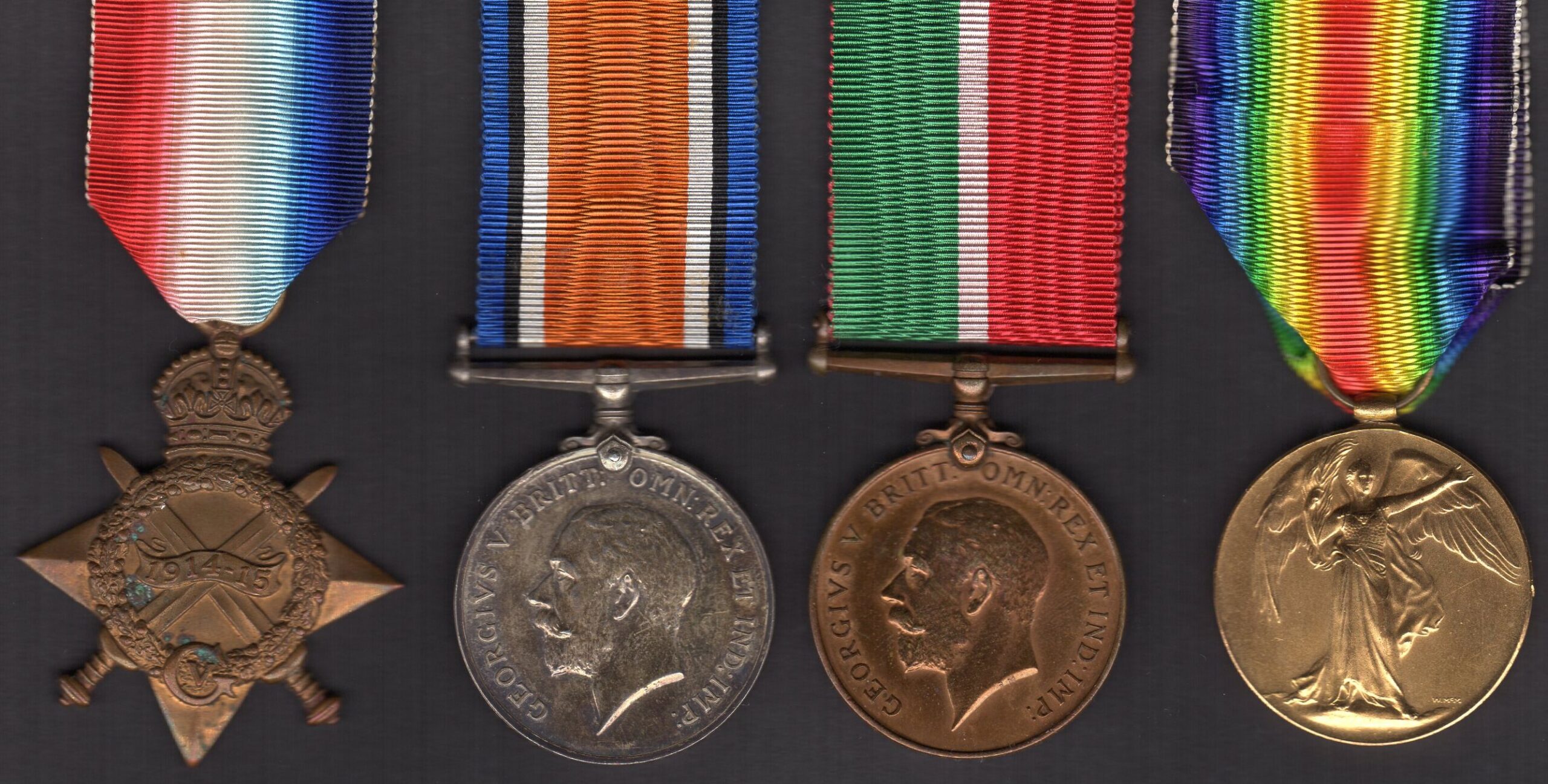 The medal is impressed round the rim in sans serif capitals simply with the recipient’s name, with the forename usually in full (e.g. “William A. Jones”) and generally with no further “unit” distinction – though examples are known named to the Fishery Reserve and to other merchant navy formations, though these are rare. The accompanying British War Medal is named in the same way when just these two medals have been awarded to one recipient. Medals can be found to merchant navy personnel from Britain and the Empire and all parts of the globe – to Arabs, Chinese, Indians and various European nationalities (e.g. Greek or Maltese) and also to women. Medals to Australians are impressed with just the recipient’s initials and surname and have AUSTRALIA (in the centre of the rim) and the recipient’s merchant navy number. About 100 were awarded to Canadians.

Figures as to the number of Mercantile Marine medals awarded have risen over the years, as more research has been done, and it is now reckoned that around 250,000 were actually issued – still a comparatively low number for WW1 awards.

Medal award cards are held in The National Archives in Kew (series BT.351) and are also available online on some commercial genealogical sites (e.g. www.findmypast.co.uk); they verify the award and give a little information – the recipient’s date and place of birth, date and place of issue etc.