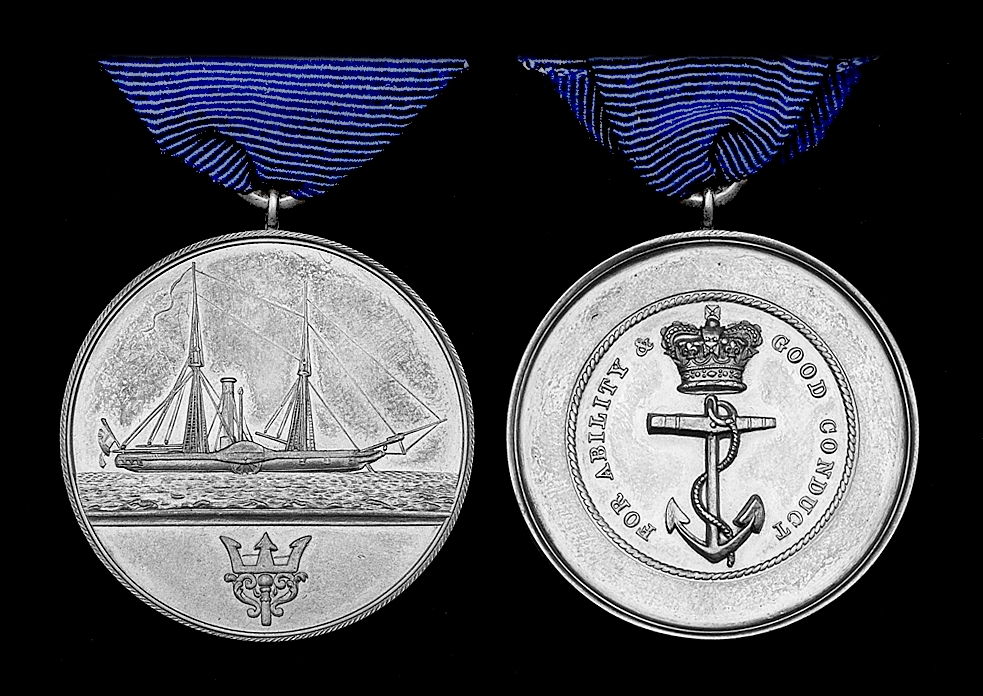 In the first half of the C19th, the Royal Navy gradually embraced the introduction of steam power and steam engines on its warships. The first steam powered naval vessels dated from as early as the 1820s (HMSs Monkey and Comet, 1821-22 ) but their use was severely restricted and steam power was only slowly extended in the face of entrenched traditional attitudes – after all, wind power had done very well for centuries! The first “real” steam warships were HMS Gorgon and her sisters laid down from 1836.

The new equipment and engines needed a new class of expert to keep them efficient and in operation. The first qualified “engineers” in the royal navy, enrolled as a service branch in 1837, were first classed as senior Petty Officers – in line with Carpenters and Gunners. As such, they would technically qualify for the Naval Long Service and Good Conduct Medal (1830) but it was soon felt that these technical professionals should merit a different award.

The result was the institution of the Naval Engineers Good Conduct Medal in 1842 – though it was very clear from the outset that this decoration was much more in the line of a “meritorious service” award rather than anything simply rewarding length of service. All of its (very few) recipients were given the medal for specific and exacting achievements.

The medal was only awarded, as far as the surviving records or examples show, on EIGHT occasions, though one of recipients was, for some reason, actually given two medals of slightly differing design!

Since Urquhart’s medal (which is known to exist) doesn’t feature in Admiralty records, it is just possible that other unrecorded examples also exist – though they would no doubt add very few to the total. 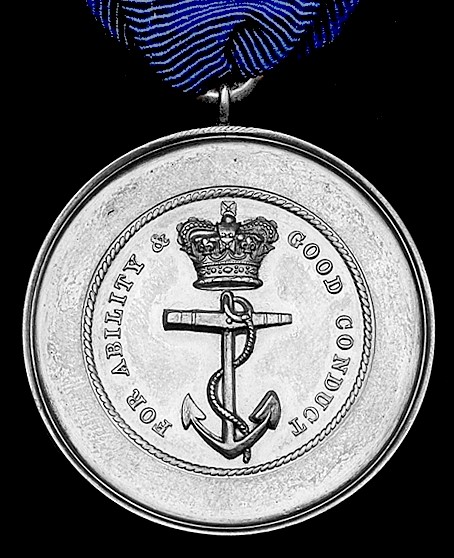 The reverse of the medal – naming details were engraved in the flat space around the central design.

No particular ribbon seems to have been specified, so that it was seen worn from the naval LSGC ribbon or from a plain dark blue ribbon.

The medal was designed by William Wyon (as was so often the case!) whose own family company apparently retained the dies. Apart from some differences to the clarity of the rigging, pendant and bowsprit, the most obvious differences are to the raised edge of the medal: 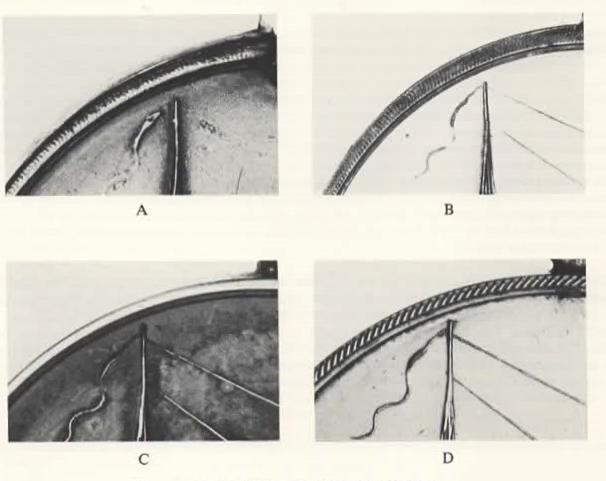 Very quickly the level of technical skill required of an engineer elevated their status beyond that of their naval Petty Officer colleagues and in 1847 it was decided that qualified engineers would actually rank as officers. In that case, the award of a “long service” medal was deemed inappropriate and the Naval Engineers Good Conduct Medal ceased to be conferred.

With so few medals actually issued, and these rarely appearing on the market, the medal is surely the rarest official British award. But the story does not quite end in 1846. In 1875, three prominent medal collectors (apparently quite independently of each other) wrote to the authorities at the Royal Mint asking if they could have an example of the medal for their collections. The Royal Mint, borrowing the Wyon family’s dies, duly obliged (those were the days!) and just a few examples of the medal were struck to meet their request and provide a few other “official” copies. It is not known exactly how many were restruck on the occasion; it has been suggested that the medal might be revived (just as the lapsed Conspicuous Gallantry Medal of 1855 had been revived in 1874) but nothing came of the idea, if indeed it was ever officially considered.

The same circumstances occurred in 1908 when the Mint once again restruck a number of examples on request. Again, it is not know how many were produced at this time but it cannot have been very many. 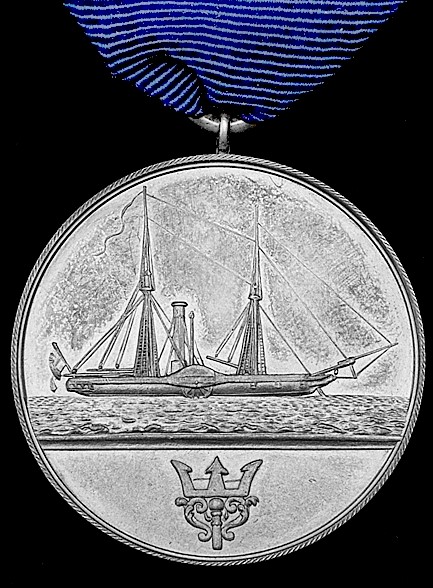 Obverse of the 1875 restrike, with ropework edge.

What is remarkable about the various issues (1842-47, 1875 and 1908) is that they all show clear differences in their design. It begs the question as to why any work would have been needed on the dies themselves given that they had had such little use – they can hardly have been worn down. It at least makes it easy to decide which version you have – if you can find one!

Since writing the above, two examples of the medal have recently appeared in the same DNW auction. One was a simple specimen disc but the other, more intriguingly, was the “second issue” awarded to Engineer William Dunkin. Dunkin earned the medal for outstanding service in the West Indies in 1837. When Engineer of HMS Carron he volunteered to repair the engines of HMS Alban in Antigua; the ship’s actual Engineer (wisely?) declared himself too ill to do the job so Dunkin volunteered to dis-assemble, repair, clean and re-assemble the ship’s engines, which took 14 weeks. For this he was, unsurprisingly, highly commended – the Captain said that the engines were in as good a state as a result of Dunkin’s work as when they were first fitted! Dunkin was duly chosen in 1842 to receive the Engineers’ Good Conduct Medal – only the second conferred. The medal which recently appeared in DNW, which had been in the Douglas-Morris collection along with the other Dunkin medal, has been described as a “duplicate” or “late issue” or “replic 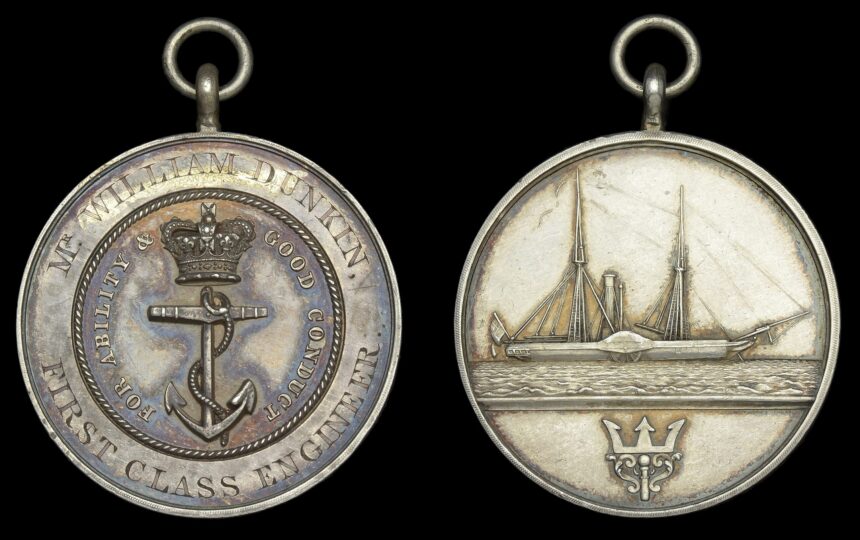 a”. But there may be more to it than that.

Dunkin carried out another impressive work of engine restoration on HMS Gorgon in Monte Video in 1844 when she was immovably trapped in mudflats and just about everything aboard had to be stripped down and removed, including all its engines and machinery. Douglas-Morris points out that Dunkin was again highly commended for the removal and eventual re-assembly of the machinery but could not have been promoted for the service, since he had already reached his top rank and that the authorities “did not consider the award of a bar” to his existing Engineers’ Medal. This is true – but they may well have given him a second medal as a reward. It is interesting that both are named in exactly the same style – i.e. probably engraved by the same man.

Dunkin died suddenly in 1852 in Cork when still serving Engineer of HMS Ajax; his son, also William and also a Naval Engineer, died in 1858.