British operations in the Red Sea during the 1914-18 war would undoubtedly fall into the category of ‘forgotten theatres’ if it were not for the Arab Revolt of 1916-17 and the legend of T. E. Lawrence ‘of Arabia’. Lawrence has received so much later historical attention that at least some element of the Royal Navy’s work in the Red Sea has been preserved.

The Red Sea was of course vital to British trading and imperial interests long before 1914. Before the opening of the Suez Canal in 1869, the route from Alexandria to Suez on the Red Sea provided the so-called ‘overland route’ to India and the East. It was largely because of the importance of this route that Britain took Aden in 1837. The Red Sea became even more crucial to Britain after the opening of the Suez Canal in 1869 and the threat of growing Italian and French influence in the Sudan and the Horn of Africa further stimulated British concern for the control of the Red Sea.

During 1914-1915, British naval policy initially divided the Red Sea into two ‘patrol zones’, with overall naval control exerted by British naval command (initially under Vice Admiral Peirse) at Port Said. The North Patrol was based on Suez and its political role vis à vis the Arabs was largely directed by the authorities in Egypt. The Southern Patrol was based at Aden, its political activity determined from India via the Political Resident in Aden. The boundary between the two zones was along Parallel 21, roughly dividing the Arabian coastline into two halves at Jeddah. 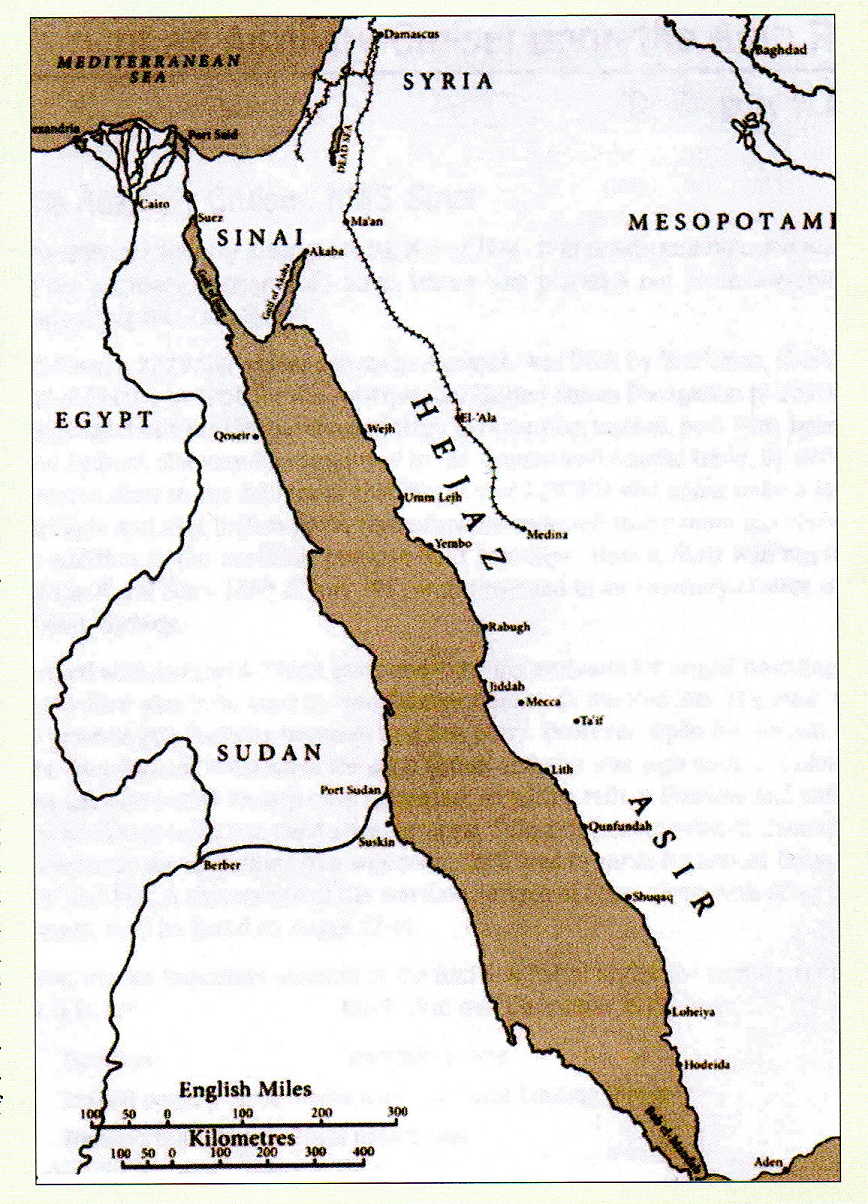 This double control was not always helpful and in 1916 the two zones were amalgamated with political direction coming under Indian authority via Aden and naval command directed from Port Said.

Given the importance of the Red Sea, the initial deployment of warships (see below) was not impressive, due to the demand in more important areas. As early as 1914 and 1915, these warships were in action – the port of Akaba was shelled in November 1914 and in 1915 some of the Red Sea Patrol ships served in the defence of the Suez Canal to frustrate the initial Turkish attempt to cross or seize the canal.

From 1916, the Red Sea Patrol had very distinct objectives :

1. To intercept and search any ships (largely Arab dhows) trading with the 800 miles of Arabian coastline. This was largely intended to prevent supplies of food and ammunition reaching Turkish forces and coastal garrisons but was difficult to enforce – given the length of the coastline, small boats could often slip through the thin naval cordon and even when stopped could claim to be delivering food to the Arabs.

2. To blockade Turkish ports and harass Turkish forces by bombarding their coastal positions and garrisons or by landing armed parties along the coast to destroy their supplies and depots. Some of these landing parties had an exciting time!

3. To prove to the Arabs that Britain would and could support them against the Turks – in other words, to ‘show the flag’, to demonstrate British naval power and to encourage an Arab uprising.

4. Crucially, to support and co-operate with the Arab Revolt when it had got underway. This is probably the biggest role the Red Sea Patrol had and it was highly important. The ships of the Patrol ferried Arab (and supporting Egyptian) forces along the coast for operations inland, ran innumerable supply runs carrying ammunition, fodder and water and even provided on occasion air support from early seaplane carriers. 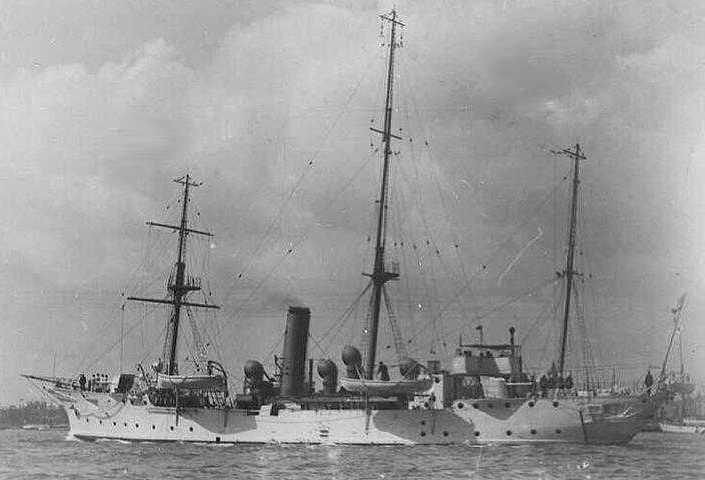 These aims were not supported by a very impressive fleet. Many of the ships were old – often too old to be useful in other theatres – and others were from a mixed bag of Royal Indian Marine (RIM) ships, supplemented by requisitioned drifters, armed launches and lighters. Some of the RIM ships (e.g. Clio, Espiègle, Hardinge) had already served in Mesopotamian operations or along the East African coast.

The most sizeable naval operations (apart from the blockade and ferrying supplies for the Arab Revolt) were the attacks on Jeddah in June 1916, on Wedj/Wejh on January 1917, the capture of Salif in June 1917, the support given to Lawrence at Akaba, the attack on Qunfundah in July 1917 and the landings at Hodeidah in November 1918. Much of their exploits read like the old naval actions of another age – ‘ships’ boats’ under a Petty Officer chasing down blockade runners, sometimes at night, and small naval landing parties and marines going ashore on highly successful ‘hit and run’ raids against Turkish stores, depots, coastal installations and garrisons along the coast. 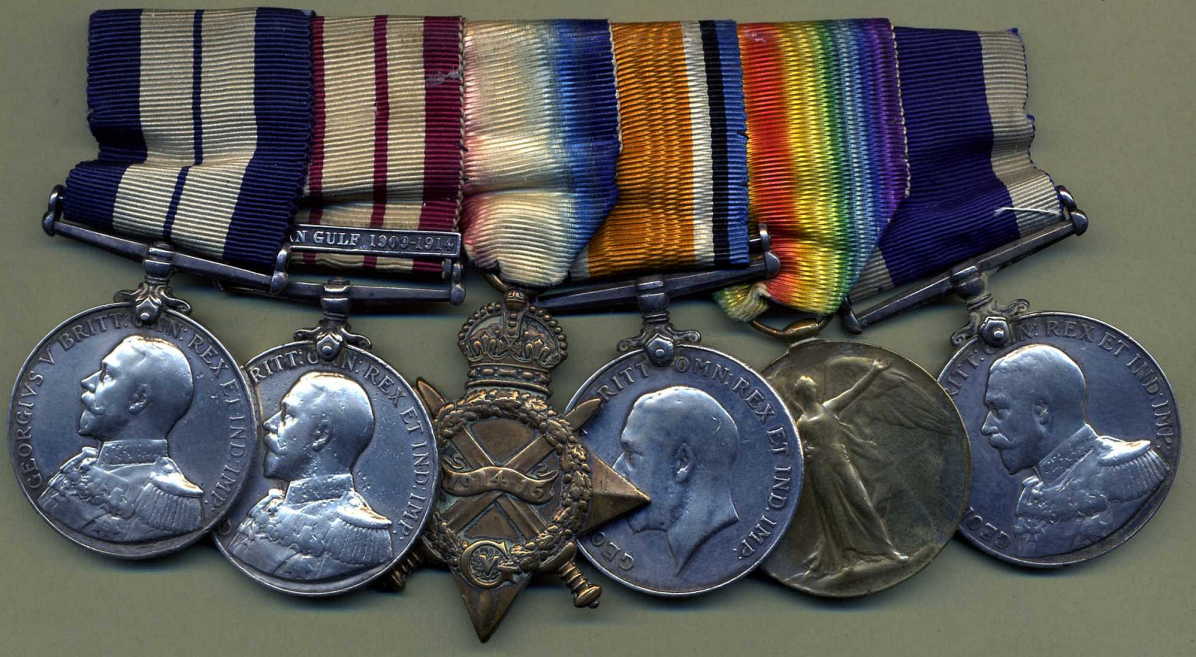 DSM group to A. V. Brister – for service in the Red Sea on HMS Hardinge

During the main period of active operations 1916-18, attacking Turkish positions or in support of the Arab Revolt, the following warships served in the Red Sea Patrol – not necessarily for all of the time. Those of the initial squadrons in 1915-16 are indicated with an asterisk; just some of their services (where they can be traced) are listed.

City of Oxford : Seaplane carrier. Cdr. J. Brown. Its ‘planes bombed the area around Loheia and the fort at Zohrah.

Hardinge* : RIM armed troopship, 6,520 tons (1900 – 1930). Actg. Cdr. T. J. Linberry. Originally a troopship, it operated like its fellow RIM vessels under many guises – bombarding the coast, landing Arab troops, ferrying supplies and water etc. Suez Canal defence, 1915. Supported rising at Jeddah, June 9th 1916 by bombarding Turkish defences for 6 days. Attacked Wejh, October 1916 and landed sailors to destroy stores etc. This ship was heavily involved in supplying Lawrence and his Arab forces by sea and at Akaba after its capture by Lawrence and is referred to several times in his Seven Pillars of Wisdom. Lawrence was aboard the ship at various dates in Jan. and August 1917. Conveyed the annual Holy Carpet and its escorts across Red Sea to Jeddah for transmission to Mecca. Attack on/capture of Wejh, Jan. 1917. 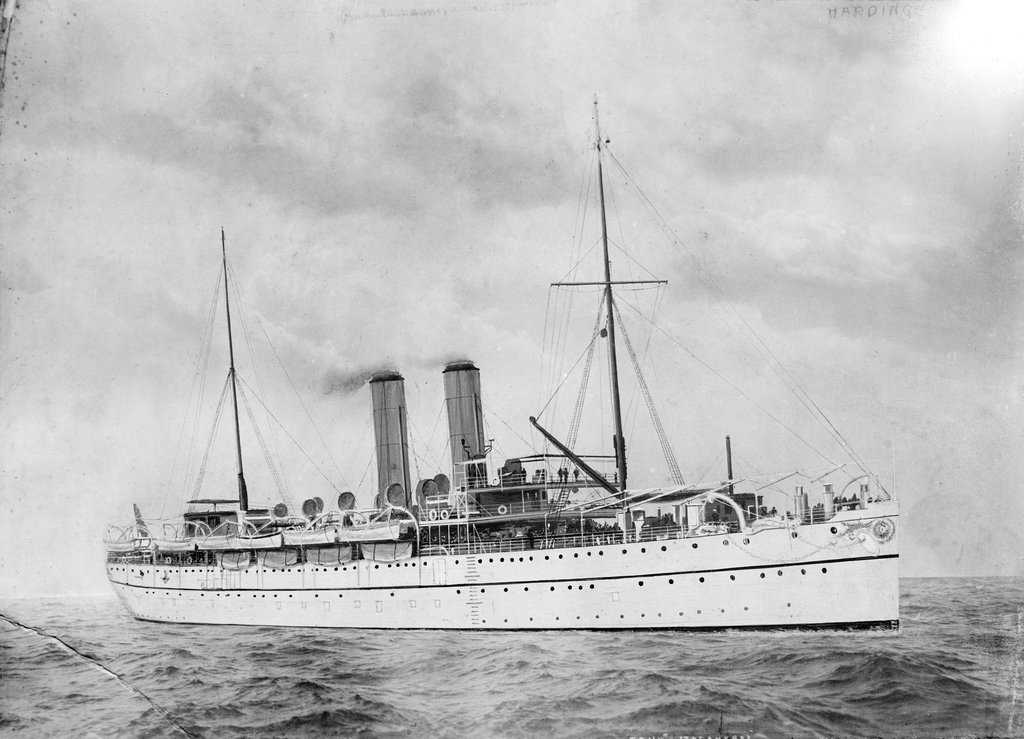 As related in his Seven Pillars of Wisdom, Lawrence was frequently aboard the Hardinge and on occasion the ship’s  hospitality was also offered to Feisal:
‘In the early days of the revolt it had been the Hardinge which had been given leisure to play providence to us. Once at Yenbo, Feisal had ridden to the port from the hills on a streaming day of winter, cold, wet, miserable and tired. Linberry had sent a launch ashore, and invited him to the ship where he had found a warm cabin, a peaceful meal, and a bath made ready for him. Afterwards he lay back in an armchair, smoking one of his constant cigarettes, and remarked dreamily to me that he now knew what the furnishing of heaven would be like.’ (The Seven Pillars of Wisdom by T. E. Lawrence). 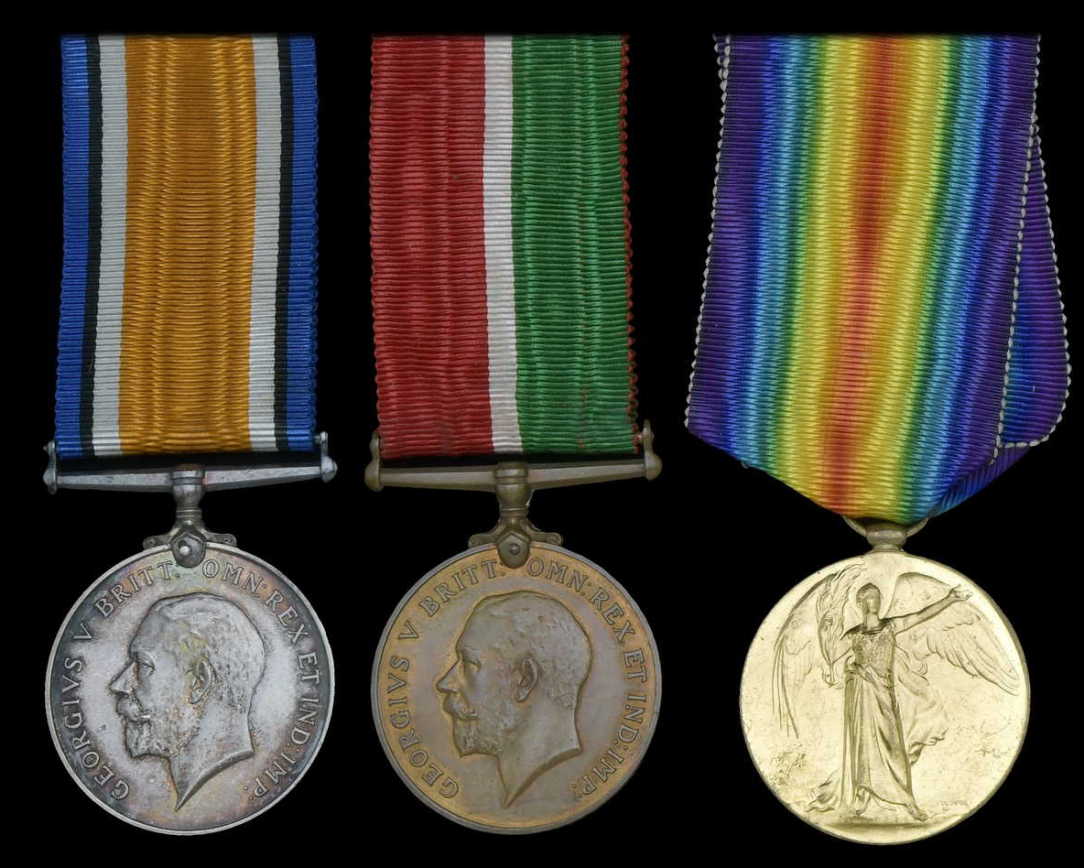 Majestic, Jupiter and Astraea served late in 1915 as Guard Ships at Aden.

Arethusa was also briefly employed in the Red Sea in 1917. 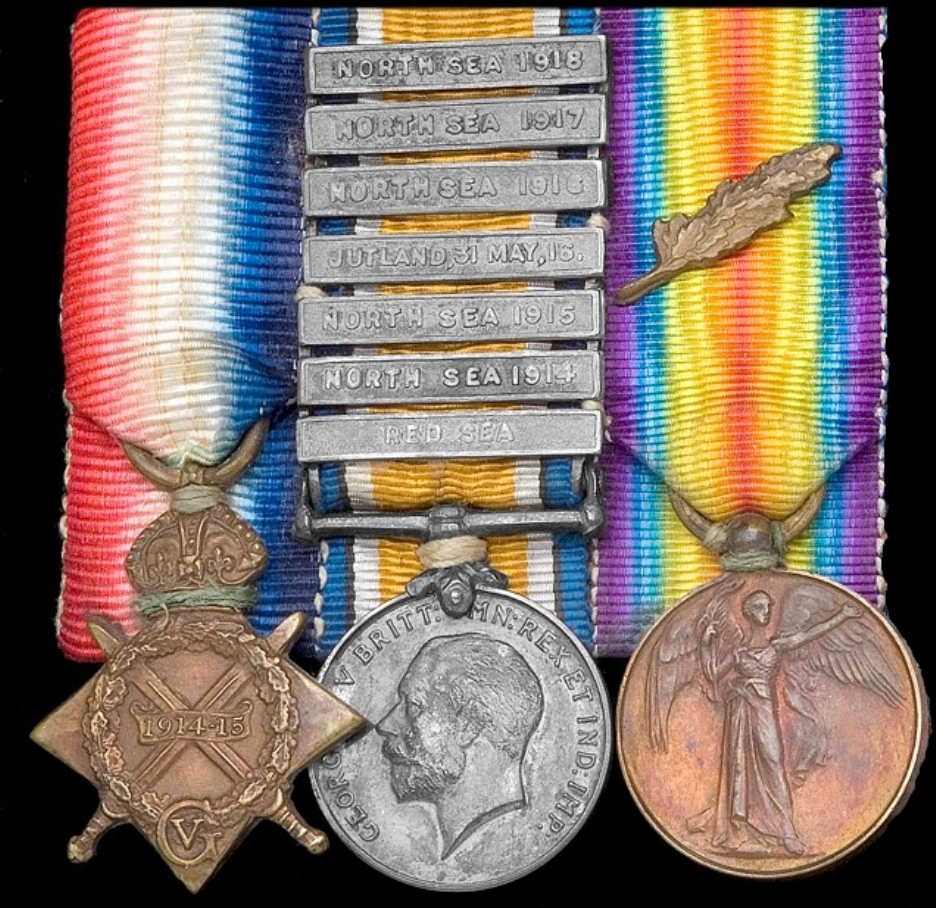 Miniature group with “Red Sea” as a clasp.

It is not easy to separate the honours and awards specifically for the Red Sea Patrol from naval awards for Egyptian waters in general. However, the following, all published in the London Gazette of 20th September 1918, were definitely for service with the Red Sea Patrol:

Lt. Cdr. G.P.M. Fitzgerald was Mentioned in Dispatches for service in Verbena. He was also awarded the Order of Nichan Iftikhar in 1919.

Lt. Cdr. G. T. W. Perkins was Mentioned in Dispatches; served in both Hardinge and Dufferin.

Lt. H. D. Nichol was Mentioned in Dispatches for service in Espiègle.

C.P.O. W. Roman received the DSM for service in Espiègle.

L/S. W. T. C. Hawke was Mentioned in Dispatches; had served on Clio, Minto and Espiegle in the Red Sea Patrol.

Chf. Armr. Herbert Kriebel was Mentioned in Dispatches; had served on Topaze in the Red Sea Patrol.

C.E.R.A. F. S. Pickard was Mentioned in Dispatches; had served on Fox in the Red Sea Patrol.

C.E.R.A. W. A. Porter was Mentioned in Dispatches; had served on Fox in the Red Sea Patrol.

C.E.R.A./1 G. J. Roberts was Mentioned in Dispatches; had served on Topaze in the Red Sea Patrol.

Since the service papers of RN officers, Petty Officers and ratings etc. are available online via the National Archives website and others, it is possible to identify the ships on which a man served and medal collectors might well be interested in looking for medals to men serving aboard these vessels. They certainly had an interesting war!