As medal collectors are well aware, just about every campaign and clasp is available for the Royal Artillery; they truly lived up to their motto Ubique – “Everywhere” – and their activities can generally be easily traced or followed in campaign histories.

The Ashantee War, fought on the Gold Coast in 1873-74, is something of an anomaly in this sense. When the war first began, with an Asante (Ashantee) invasion of the Gold Coast Protectorate, there was little in the way of armed force available to resist the incursion. The first British forces to respond were drawn from ships of the Cape Squadron which landed marine and naval detachments and part of the West India Regiment, to put up some sort of defence. In the meantime, a British expeditionary force was rapidly being assembled and Sir Garnet Wolseley sent out (in advance) to organise the defence and assume command. 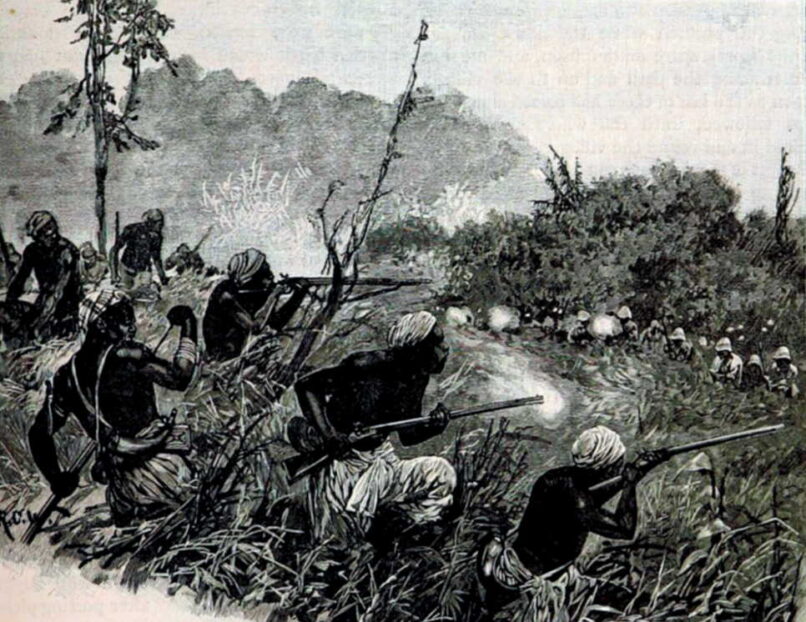 Eventually, in mid-December 1873, transports and troop ships began to reach the Gold Coast. But such were Wolseley’s initial problems with supply and especially with transport that he was forced to delay the disembarkation of most of his forces pending the organisation of some sort of local transport system. It remained a serious problem throughout the campaign. Therefore, shortly after arrival, the Himalaya, carrying the 2nd Rifle Brigade, was immediately sent back out to sea to cruise around for 19 days and the Tamar, carrying the 2/23rd and others, also had to turn round and go back to sea for 16 days. Both battalions, of course, along with the Black Watch, later landed and played a prominent part in the campaign beyond the Pra (Prah). Other troops sent out to the Gold Coast had the pleasure (?) of long spells aboard ship doing nothing or going back out to sea!

In his original request for troops Wolseley asked for the usual contingents of support services to join the three battalions of infantry he asked for (ulimately 2/23, Black Watch and Rifle Brigade) and these were duly sent out – 28th Company RE, personnel of the Army Service Corps, the Army Hospital Corps, the Control Department etc. He also asked for 60 men of the Royal Artillery and in due course part of No. 1 Battery of 17th Brigade was dispatched. This Royal Artillery detachment of around 70 officers and men had something of a different experience once it too had reached the Gold Coast. In fact, according to some contemporary accounts, the RA contingent was not even landed and simply returned home – though this claim proves to be somewhat wide of the mark. Bush warfare – as on the medal reverse.

The men of 1/17 RA arrived at Cape Coast Castle on 12th December 1873 aboard HMS Tamar, which was also conveying the 2/23rd – but unlike the RE, AHC, ASC and other detachments which later arrived on the Himalaya, they were, in the end, not due to be landed. Wolseley himself said that “I shall not land one man more than I consider essential to the success of my operations and I shall not detain any English troops on shore for an hour longer than is absolutely necessary.” Wolseley simply states that he decided that, short of porters and transport, he would do have to do without the Royal Artillery and after a few days bobbing about at sea, the contingent was apparently to be sent home. Wolseley’s Assistant Military Secretary, Capt. Henry Brackenbury, in his detailed two-volume account of the campaign, echoes Wolseley’s comments – that the RA were not actually needed and could not be served by transport, so they were to be sent back home fairly quickly.

As his artillery arm, Wolseley simply came to rely upon detachments of Royal Marine Artillery, drawn from the naval squadron under Admiral Hewett, and, more precisely, on a scratch-built battery organised very early in the campaign (October 1873) by Captain Alfred Rait R.A., employed on the Gold Coast as one of a number of  “Special Service Officers”, and an officer who had seen action in the Maori wars.

The reverse of the Ashantee medal, with Coomassie clasp. An example to a man of the Royal Marine Arty.

Known in the campaign accounts as “Rait’s Battery” or “Rait’s Artillery”, it drew most of its personnel (115 men as gunners and porters) from locally-recruited Hausas and some Fante and was armed with two Gatling guns, three 7 pounders (one left on the coast) and much-used rocket troughs. (“Captain Rait and Lieut. Eardley Wilmot [who was killed in action], of the Royal Artillery, had drilled a number of Houssas as gunners for Gatling guns and rockets, who afterwards rendered admirable service”). 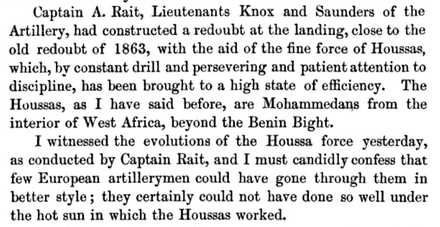 Wolseley was able to report on the 15th December 1873 that “the first phase of this war [i.e. security of the Protectorate] had been brought to a satisfactory conclusion by a few companies of the 2nd West India Regiment, Rait’s artillery, Gordon’s Houssas, and Wood’s and Russell’s regiments, admirably conducted by the British officers belonging to them, without the assistance of any English troops except the marines and bluejackets, who were on the station on his arrival.” These effectively ended the possibility of a major Ashantee invasion.

The Fante country being secured, the advance was pushed forward and the main force crossed the Pra (Prah) on 20th January 1874. Rait’s Battery was “to the fore” and saw considerable action throughout the main part of the campaign,  en route to Commassie, in the main action fought at Amoaful on 4th February and up to 28th February 1874. Wolseley spoke well of them and clearly thought a great deal of their efforts; Rait was appointed C.B. for his service. It is interesting to note that General Sir John Headlam’s detailed History of the Royal Artillery (1940) makes absolutely no mention of any artillery being present during the campaign other than Rait’s. 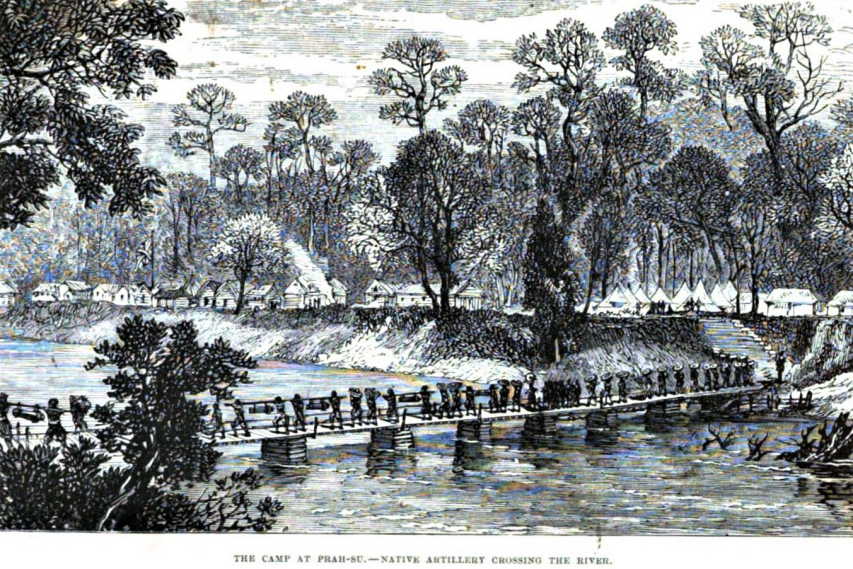 However, a glance at the medal rolls reveals a slightly different story. There is indeed a roll for the men of 1/17th Brigade, of whom four officers – Major Bainbridge, Lieuts. Freeth and Lowther and Surgeon Smith – received the medal, with Freeth being awarded the Coomassie clasp, having served with Rait’s battery. The following NCOs and Other Ranks of 1/17 RA received the medal without clasp – presumably the ones who were sent home supposedly without being landed. These were:

And the following three NCOs, added to the end of the 1/17 roll, also received medals without clasp –

These three were ordered out to the Gold Coast in September 1873 and all three were attached to another “scratch” unit – “Captain Glover’s Force” of Hausas, training them in artillery and rocket duties. The journey of this force constititutes a remarkable story in itself – advancing inland westwards from the distant river Volta, crossing some 250 miles of forested territory, much of it unmapped, to raise and lead a force of various local tribes against the Ashanti. It was an exceptionally difficult undertaking.

But returning to Rait’s Artillery, the roll at Kew – which looks to be incomplete – implies very clearly that none of the Hausas and other locally-recruited men were awarded the Ashantee medal, even though they provided the bulk of the battery personnel. Rait, however, had said that he found it extremely difficult to train the Housas as gunners and that European gunners would probably be needed (“to have a European to lay each gun”) so that it was “incumbent on the Major General to apply for a detachment of European artillery to service the guns”. This may have been the origin of Wolseley’s original request for R.A. personnel, eventually in the form of the 1/17th detachment. As a result, four European Officers and a number of NCOs and Gunners were posted to serve with Rait, all of whom received the clasp Coomassie; four men of the RMA are also shown of the roll for Rait’s Battery, also receiving Coomassie. The European NCOs serving with Rait were drawn from 1st Battery, 17th Brigade and their names also appear on the separate roll for that battery – so the statement that the RA detachment was never landed is not quite true. At least some of them were!

The men of 1/17 RA serving with Rait according to the existing medal roll were:

The following men of 1/17th are also listed as receiving the medal with clasp Coomassie, and were presumably (therefore) serving with Rait’s Battery, though they are not on its roll, which looks incomplete as it now stands. These were:

This gives 17 NCOs and men of 1/17 RA who received the medal with Coomassie clasp and 48 who did not. It is worth noting that the three Master Gunners who are listed at the end of 1/17 RA roll were commended for service in drilling “the gunners of the Houssa force” with Captain Glover’s force and Blackman also as serving with Captain Sartorius’ “advanced force”. He and the other Master Gunners were all invalided and sent home ill, Joseph Glover with heart disease.

Given that so few RA medals were issued, it is perhaps strange that two naming styles were used. The medals are found named either “R.A.” or “1/17 Bde., RA”, though that to W. R. Blackman has “22nd Bde. R.A.”

Those men who (apparently) were never landed very easily earned a campaign medal!

Having said that, any Ashantee medals to the Royal Artillery are very scarce on the market and one with the clasp Coomassie would indeed be a rare and interesting find!