“What the Papers Say” : looking behind the medals.

Service at Sebastopol – and elsewhere 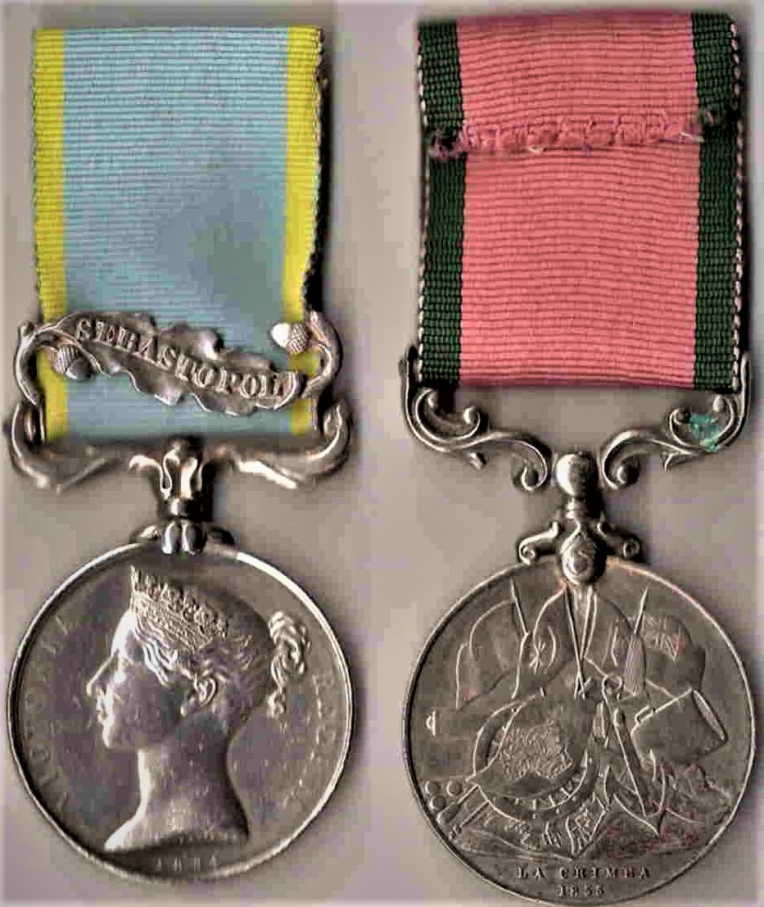 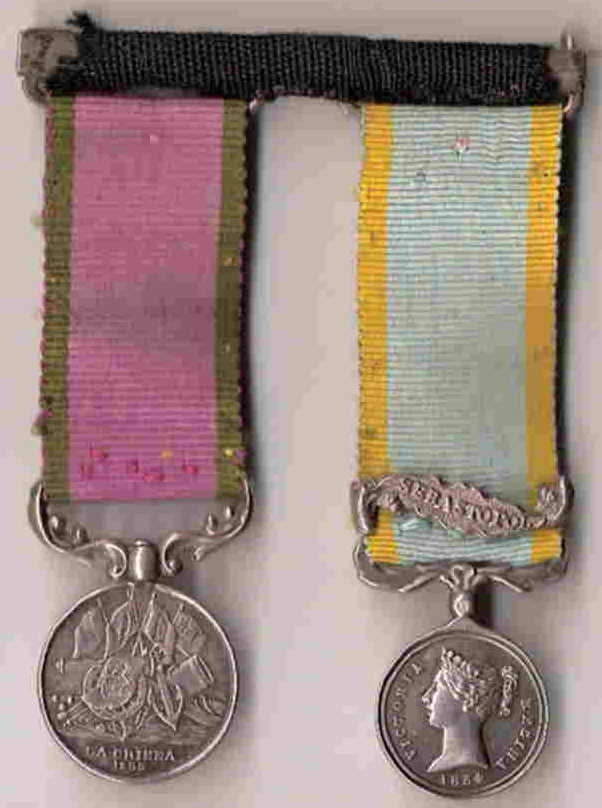 The Crimea medals (full size and miniature) illustrated here belonged to Lieutenant (later Vice Admiral) Thomas Baker Martin Sulivan (1826-1906) and represent the only medals he ever received; he served on Admiral Sir Edmund Lyons’ flag ship, HMS Royal Albert, during the naval operations off and against Sebastopol and later in the operations at Kertch and against Fort Kinbourn. Royal Albert was part of the impressive British and French combined fleet of 412 ships which not only landed the allies’ fighting forces on the beaches south of Eupatoria in the Crimea but played a major role in other operations. 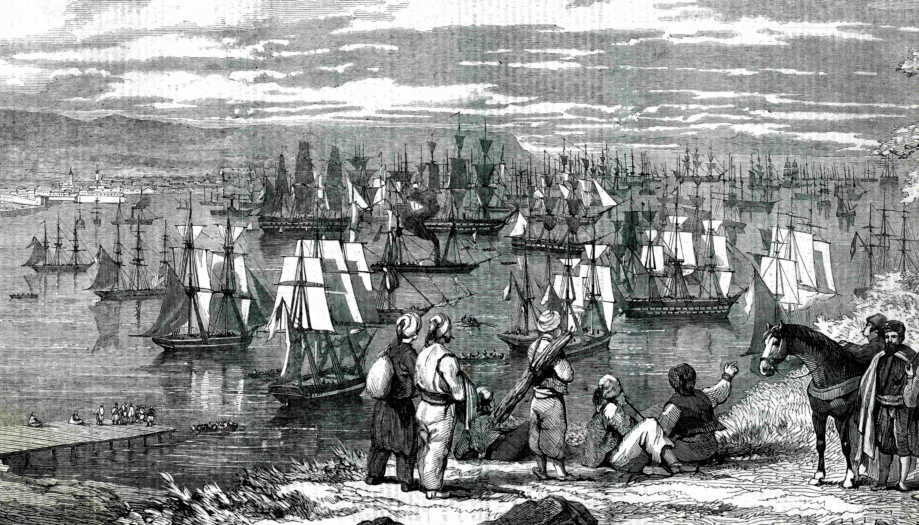 The Allied fleet leaving Varna for the Crimea

But Allied warships did not simply land troops and supplies (at Balaklava); they also took an active part in harrying Russian naval forces and supply routes in the Black Sea and Sea of Azoff. The fleet also landed a strong contingent of sailors and marines – initially 2,000 men, later nearly 3,000 – for land operations, along with 60 heavy guns taken from warships like HMS Diamond, and contributed significantly to the siege operations against Sebastopol and in the defence of Balaklava. 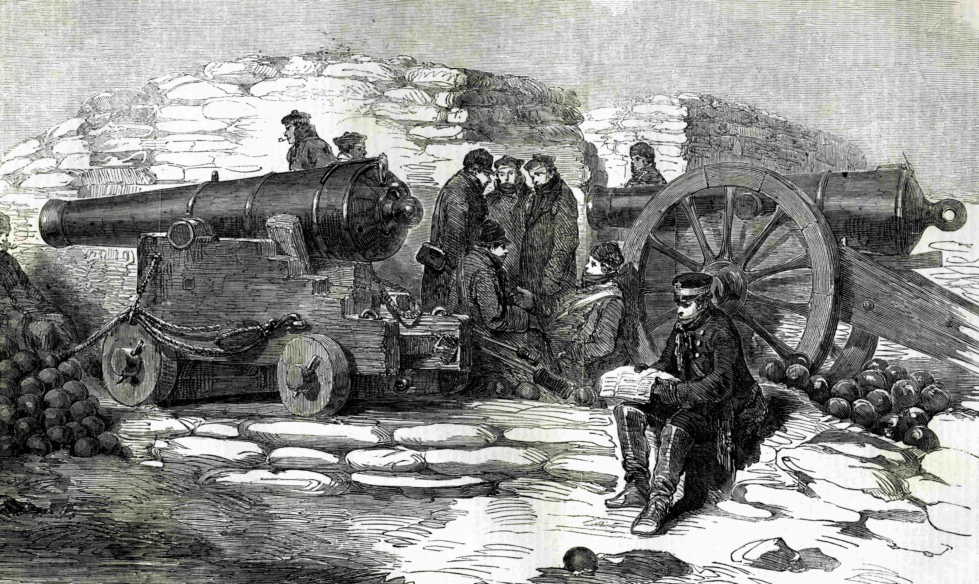 No. 2 Naval Battery on Greenhill

The most notable naval action as such was the bombardment of Sebastopol on 17th October 1854. In the Winter of 1854, as the allies settled down to what was already looking like the long siege of a well-defended port, it was felt that the combined navies could and should do something to bring their impressive firepower to bear against Sebastopol. The French believed that “looking to the situation in which the army was placed, and especially to the inferiority of its artillery as compared with that of the enemy … the navy, leaving ordinary rules aside, ought to neglect nothing which might facilitate the task of the troops…. [and] in taking such a course, would be acting in conformity with the wishes of [the] officers and men. … The navy, which had not yet found occasion to take part in any warlike action of great importance, was animated by a lively desire to have a fighting share in the success of the expedition”. 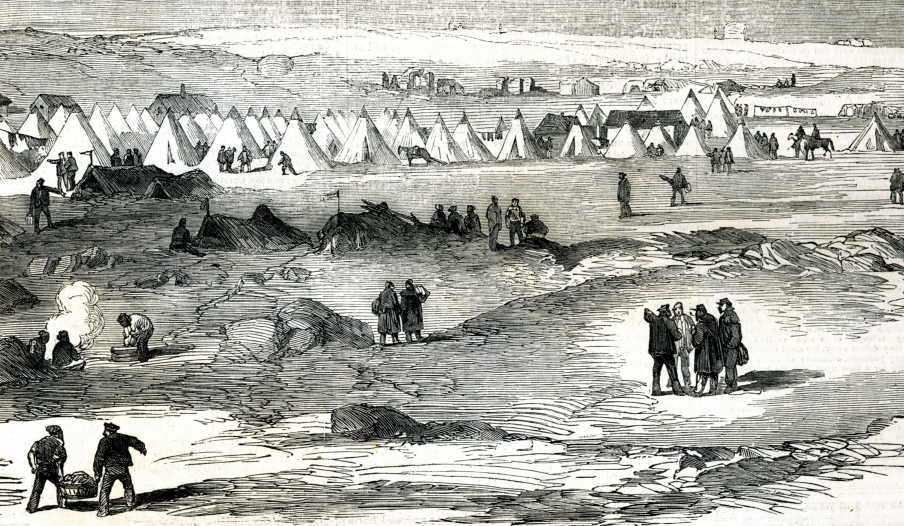 Part of the Naval Brigade camp “before Sebastopol”

Accordingly, it was agreed that a general bombardment of Sebastopol’s fortifications would take place on October 17th, with allied land forces opening up from their own positions followed by an assault on the defences. Had it succeeded it might have ended the Crimean campaign in one short, sharp action. In support of this, naval forces would stand off Sebastopol and bombard her coastal forts and harbour defences. There was considerable disagreement over this; some naval commanders felt that to have any effect the warships would have to go in so close that they would be seriously endangered – the massive stone forts protecting Sebastopol’s harbour, especially Forts Constantine and Alexander and the Quarantine Fort, were powerfully built and well-armed, these alone mounting 198 heavy guns defending the seaward approaches. They were, after all, designed to protect one of Russia’s greatest naval bases.

Nevertheless, it was agreed that concerted action should take place and that the navies would support the land operation. The combined fleet could bring to bear an impressive 1100 guns in one broadside alone, but to reduce the damage to ships simply sitting offshore in range of the forts, it was decided to engage at long range – which effectively meant that they were likely to have little effect. French warships would attack Fort Alexander and the Quarantine Fort while British ships would attack the northern sector of the sea defences, including Fort Constantine. Admiral Sir Edmund Lyons requested permission to take one squadron closer into range, along a recently surveyed channel, bringing his ships to within 800 yards from Fort Constantine. Permission was given and the screw warships Agamemnon (91 guns) and Sanspareil (70) with the sailing ships Albion (91), London (90) and Arethusa were given this task. For the rest, the steam vessels of both fleets would tow the sailing warships into bombarding positions off Sebastopol and these would form one single line right across the entrance to the port, at ranges of 1600 to 1800 yards. The simultaneous land and sea bombardments were to begin at 6.30 a.m. on 17th October but although the land batteries opened on time, the warships were not in position and, amazingly, the fleet did not begin to open fire until 12.30 p.m. – six hours late; by then, the Russian defenders had put out of action most of the French land batteries and the landward assault had been called off. 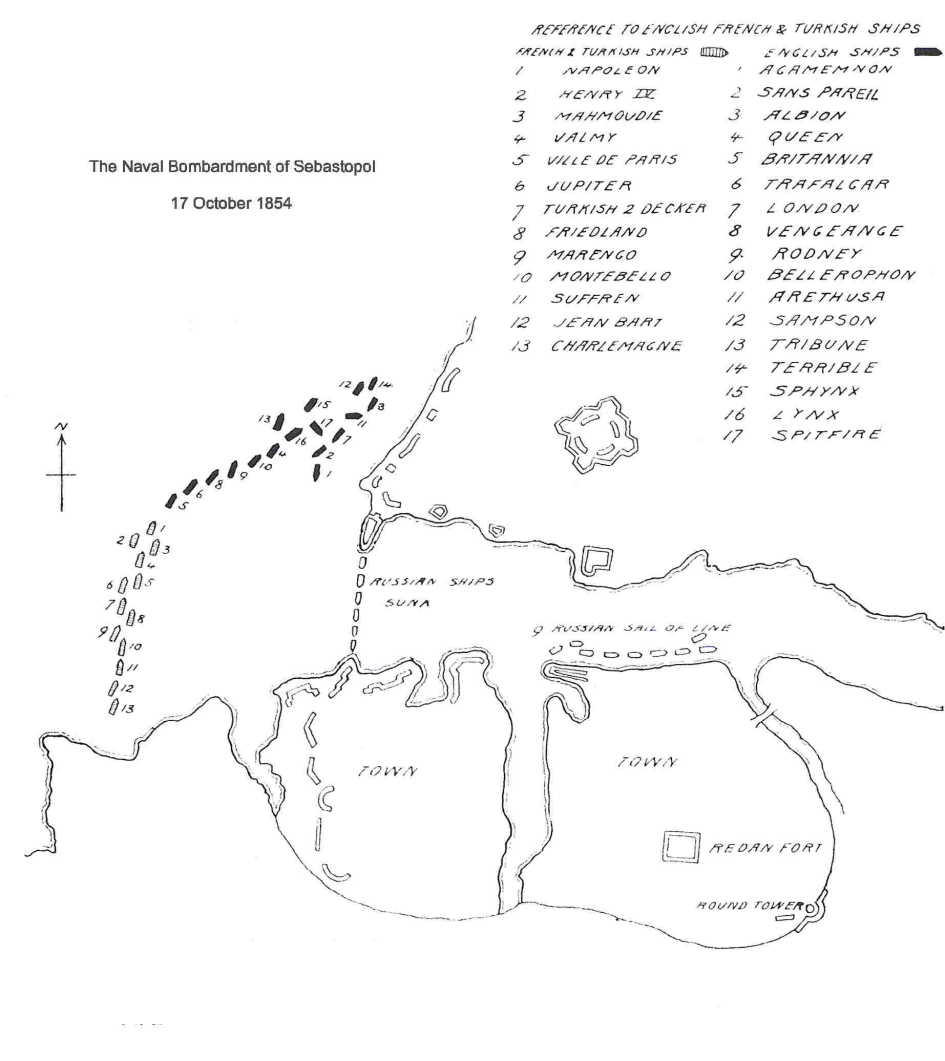 “The Times” reported on the 18th that:

“Yesterday morning, about daybreak, the English and French opened fire from their [land] batteries on the south side of Sebastopol. … The paddle-wheel and screw frigates lashed themselves alongside the sailing line-of-battle ships, and all was got ready for the fight. The French were to occupy the right as you enter the harbour – that is, the southern side – and the English, the left, or northern side, in one line, about 1500 yards off. The French got into their places about half-past twelve o’clock, and immediately commenced a heavy fire, which was vigorously returned from the batteries. The distance, however, was certainly greater than originally contemplated, and, as far as I can ascertain, was over 2000 yards. By degrees the English ships successively took up their stations, passing in rear of the French, and anchoring to the left. The Agamemnon, Sans Pareil, and London … however, took an inside station in advance – perhaps about 1000 yards from Fort Constantine. Nothing could be more noble than the gallant way in which the Agamemnon and Sans Pareil steamed in amid a perfect hail of cannon-balls and shells, preceded by a little tug-steamer, Circassian …. This little bit of a cockleshell, which looked as if she might have been arrested by a fowling-piece, deliberately felt the way for the large ships till her services were no longer required. 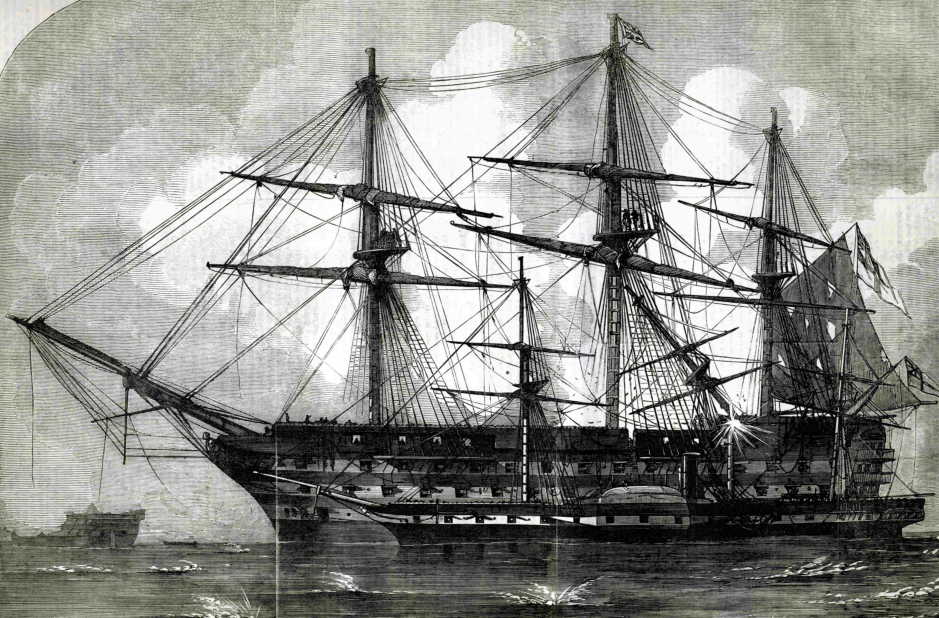 HMSs Trafalgar and Retribution during the bombardment

The firing soon became terrific. At the distance of six miles the sustained sound resembled that of a locomotive at full speed, but, of course, the roar was infinitely grander. The day was a dead calm, so that the smoke hung heavily about both ships and batteries and frequently prevented either side from seeing anything. From about two till dark (nearly six) the cannonade raged most furiously.

The whole thing (in the grand tradition of the Crimean War) was something of a farce. The allied warships continued in action against the forts, for no great reason, and not surprisingly did some damage to the lesser defence works but none at all, at long range, to the solid main defences. Even the squadron under Lyons, at only 800 yards, could do little against Fort Constantine. And all was done at great and unjustified cost to the allied fleet. They were little more than sitting targets – immobile, firing broadsides at designated defence works – and suffered tremendous damage even at long range. One account relates that Russian artillery officers “calmly and accurately determined the positions of the vessels and plied them with red hot shot and shell, with steady, unerring aim. [The ships’] decks were cut up like ploughed fields. Fires broke out in all parts”. The account continues: it was “a terrible exposition of the power of the modern shell against those wooden walls on which the supremacy of Great Britain rested”.

The damage to British ships was considerable. The frigate Arethuusa, having had her rigging cut to pieces, many shot in her hull, and 23 killed and wounded, had her main and lower decks burst into flames and she came close to sinking; Albion had three serious fires around her magazine and with 11 killed and 71 wounded was forced to abandon the fight, badly mauled and more or less out of control; Agamemnon – Lyons’ Flagship – was set on fire and, more exposed than any other ship owing to her nearness to the forts, suffered far more aloft than in her hull. She was twice on fire and was hit 240 times. Bellerophon, coming to her assistance, was raked from stern to stem, burst into flames and had to be towed out of range. HMS Queen, having successfully fired upon cliff-top batteries was quickly set on fire and forced out of the line. Rodney, sailing forward to deflect fire from Agamemnon and Sans Pareil, ran aground and though she continued to fire broadsides, could do little damage. London, with 4 killed and 18 wounded, was also forced to retire. Britannia, Trafalgar, Queen and Vengeance were much less damaged (though Queen caught fire, as did also the Britannia, which received over seventy shots in her hull). The last ship to remain in action was Bellerophon, which retired at 7 o’clock, with 5 killed and 16 wounded. 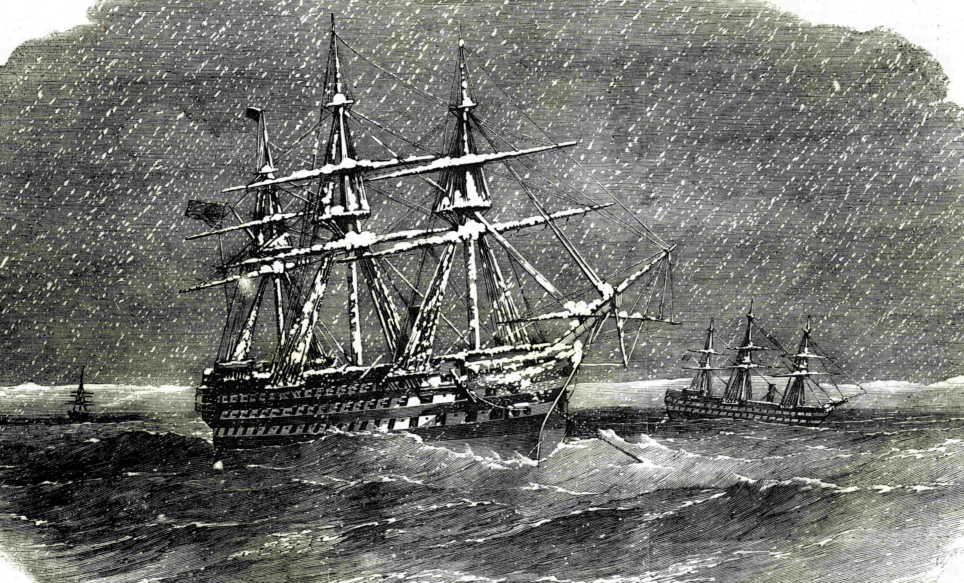 Some ships were forced back to Constantinople and even Malta for repair and there had been major loss of life – 44 killed and 266 wounded in the British fleet alone. Insignificant damage to the lesser defences of the harbour forts of Sebastopol was in fact all that was achieved – the massive stone ramparts and gun positions were hardly damaged and in some forts no guns were put out of action and apparently few lives lost.

Lieut. Thomas Sulivan served in the British fleet off the Crimea and, like so many of his comrades, on land “before Sebastopol” as part of the Naval Brigade. Indeed, the navy’s exertions as part of the land force were more highly regarded at the time than they were as a naval bombardment force. But one of the pleasures of medal collecting is to find more “behind the medals” than is apparent from the medals themselves. All collectors will know how rewarding it is to find that the recipient had a great deal more service or a more interesting career than his actual medal award implies. Research is of course the key – having the luck to find a detailed set of records for “your man”, which can open up a whole range of services and experiences. 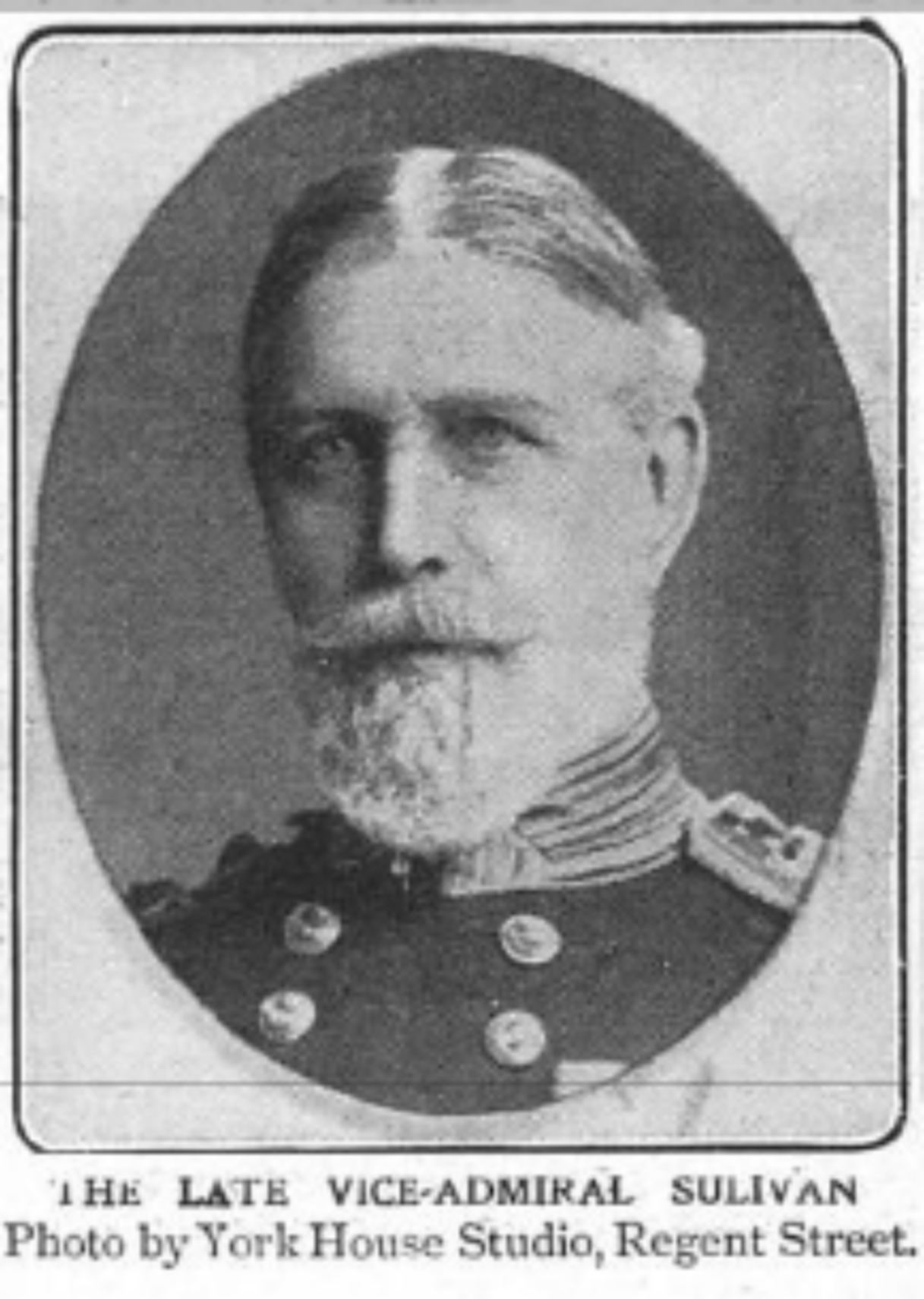 Sulivan, who came from a family of very distinguished naval officers, died in Bath in 1906 and only received these two awards, with no Navy List crediting him with anything other than service in the Black Sea and “before Sebastopol”. But research showed just how much lay “behind” these simple Crimea medals. It turned out (from Admiralty records in Kew) that his career was much longer and much more active than that. He served in fact from 1837 (aged 12!) to 1881, when he retired from active service as a Captain and reached the rank of Rear Admiral in 1885 and Vice Admiral in 1891, the last two on the retired List. He was awarded a Naval Good Service Pension as late as 1904. 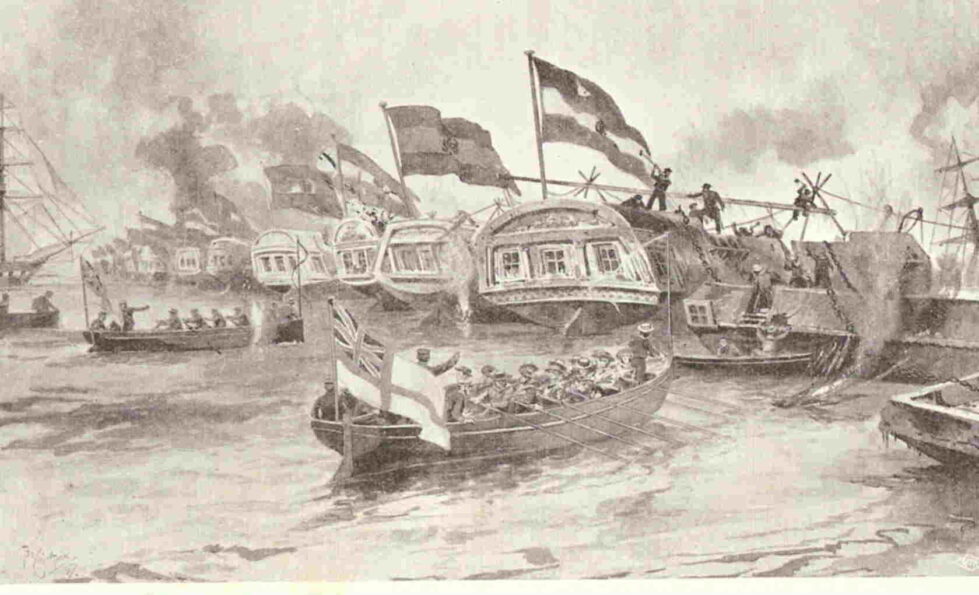 Attack on Obligado in November 1845

His active career took in: 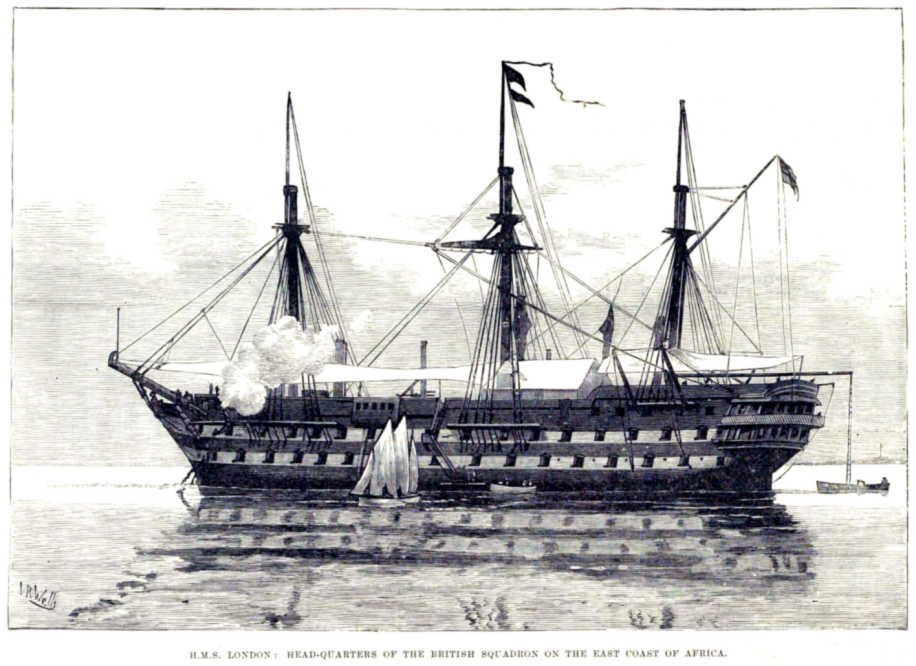 The depot ship HMS London based at Zanzibar

Crimea service on Royal Albert was only one small part of an extensive and interesting career – yet remarkably, its two medals were all that he ever wore to reflect forty years of active sea service.