In 1876 thanks to the exertions of Britain’s Tory Prime Minister Benjamin Disraeli, The Royal Titles Act proclaimed that Queen Victoria would henceforth add to her titles that of  Empress of India; it was part of the attempt to win the affections of the Indian people by tying them more closely to the British crown in the years after the Indian Mutiny and the imposition of direct British rule. In what the satirical magazine Punch cynically called a “tit for tat”, Disraeli was created Earl of Beaconsfield shortly afterwards. Victoria apparently took great delight in practising her new monogram VRI and signature as Indiae Imperatrix – Empress of India. However the Queen did not travel to India to receive the acclamation of her people on the sub-continent. The event was presided over in her absence by the Viceroy Lord Lytton and a huge “imperial assembly” or Durbar was held in Delhi on 1st January 1877 to make the public announcement of the fact of the new title; the event was well-described by Lord Roberts in his autobiography Forty One Years in India. The capital of British India at that time was of course Calcutta, but Delhi was chosen as the ancient and historic centre of Indian government.

Some of those involved in what was apparently a magnificent spectacle, especially high-ranking officials and military officers, were awarded what was officially styled The Delhi Imperial Assemblage Commemorative Medal now generally known as the Empress of India Medal. 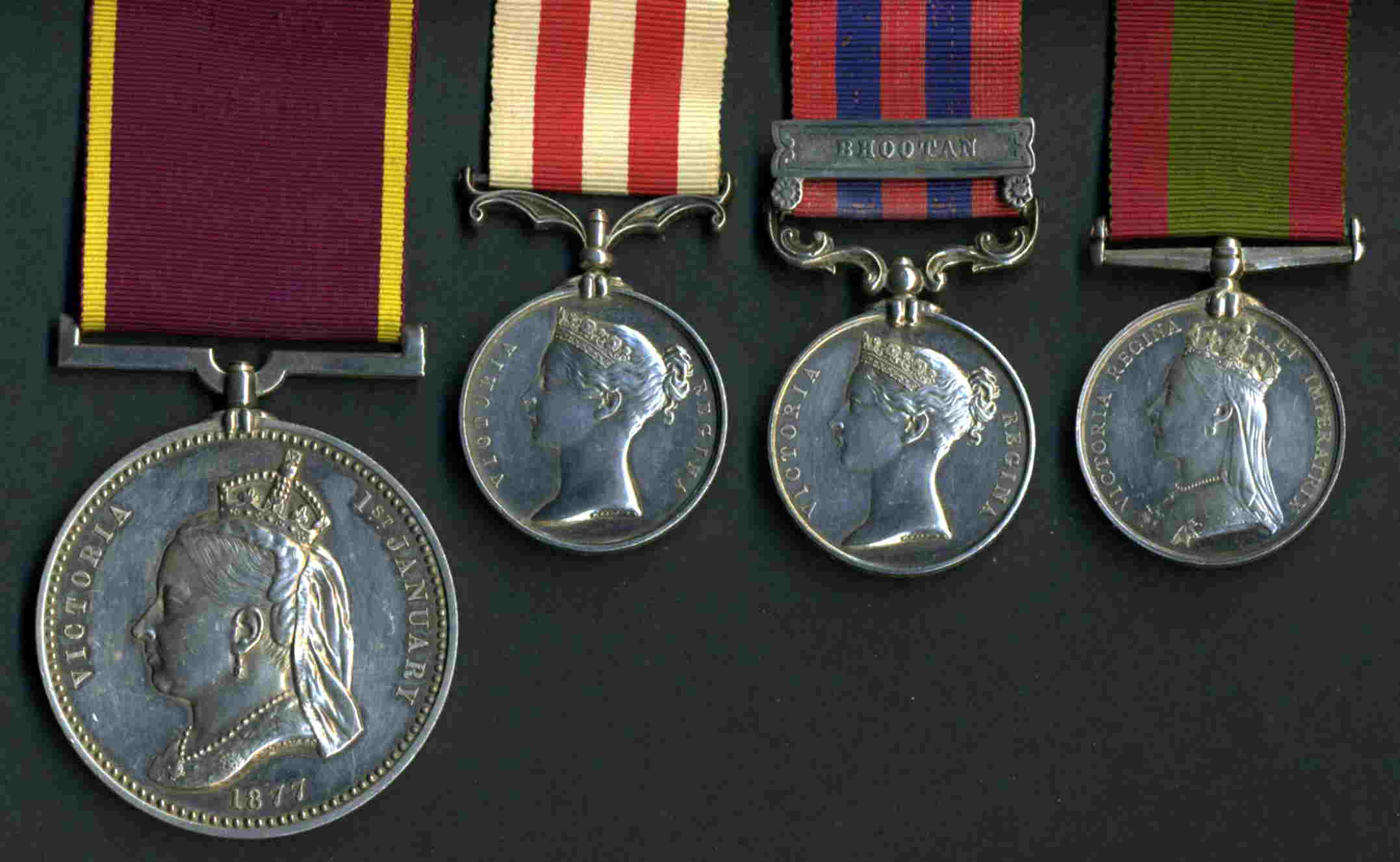 “Empress of India” Medal (obv. showing) in a group.

This unusual award – in a very large size and intended to be worn around the neck – was the first “wearable” official coronation award and had a strange history. Although officially awarded – albeit in comparatively small numbers cf later coronation and jubilee awards – it was very quickly decided that it could not be worn in uniform except annually on the anniversary of the Durbar or only in India at State ceremonies. One therefore rarely sees photos of the Empress of India medal being worn and they are not at all common. The medal awarded in both gold (to the highest ranking officials and ruling princes) and in silver was issued unnamed though privately engraved types are seen. Unfortunately there seems to be no surviving roll of recipients so the total number issued and the names of the recipients are unknown.

The 1877 Durbar set the template for later Indian coronation celebrations – the gathering together of the “great and good” of Indian society government and the military along with Indian ruling princes and their entourages to “render formal homage” before a vast concourse of spectators. For Edward VIIs coronation in 1903 as Emperor of India (and Queen Alexandra as Empress) a truly magnificent spectacle was organised by the equally grandiose Viceroy, Lord Curzon. A massive amphitheatre was set up as a central focus of the celebration on the same site as used in 1877 – and used again in 1911. Huge tented camps were set up to house the different groups attending the celebrations and a week’s worth of spectacle was arranged – grand march-pasts of Indian and British troops in full dress sporting competitions of all kinds band concerts and various grand royal receptions investitures and dinners. Those prominently involved or deemed to be deserving of honour were awarded the Delhi Durbar medal of 1903 – an attractive medal, again struck in both gold and silver, showing the King on the obverse with a graceful calligraphic inscription in Farsi reading By the Grace of the Lord of the Dominion Edward VII Emperor of India 1901 on the reverse. Although these medals were awarded rather more freely than the 1877 version they were nevertheless very selectively awarded – only 140 in gold and approx. 2560 in silver – but they were allowed to be worn in uniform alongside any other medals. 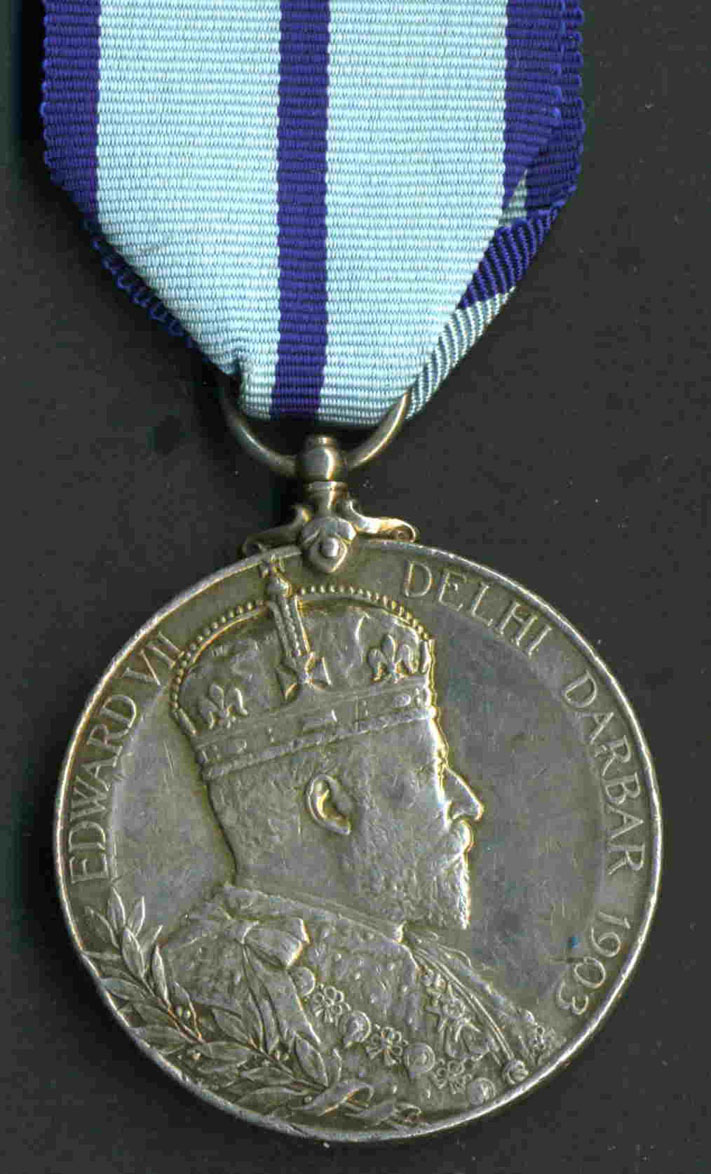 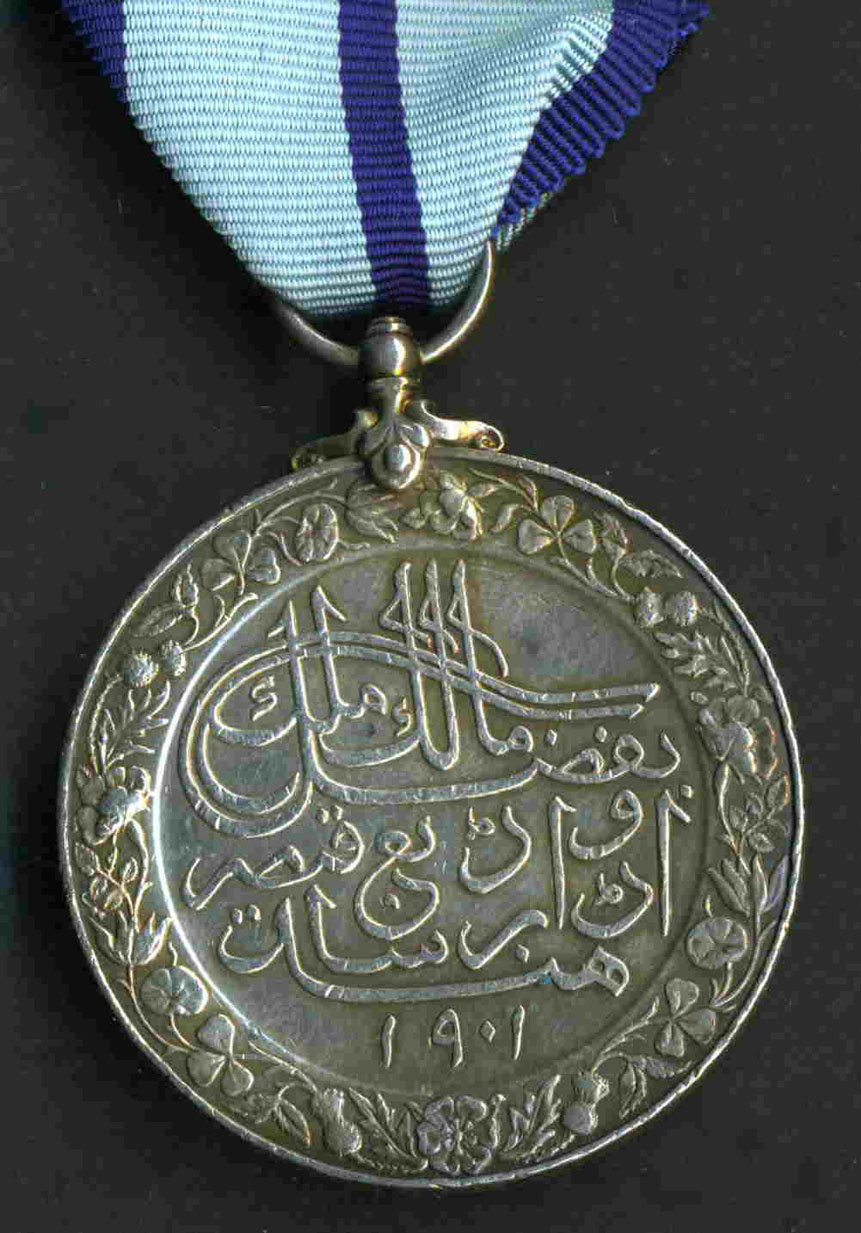 The Durbar organised in December 1911 for the coronation of King George V and Queen Mary as Emperor and Empress was to be the largest and most magnificent yet – the only one actually attended by the King and Queen in person (the first and only British ruling monarchs to visit India) and as it turned out the last Coronation Durbar since George VI’s accession in 1936 was not commemorated in the same way in India.

The organisation and scale of the Delhi celebrations in 1911 went far beyond any formal assembly ever seen in British India – and perhaps deliberately harked back to the magnificent public displays of the great Moghul emperors. The camps set up for those who were staying throughout the event – like the Ruling Prices of India and their large entourages – covered a large area and were linked with specially constructed 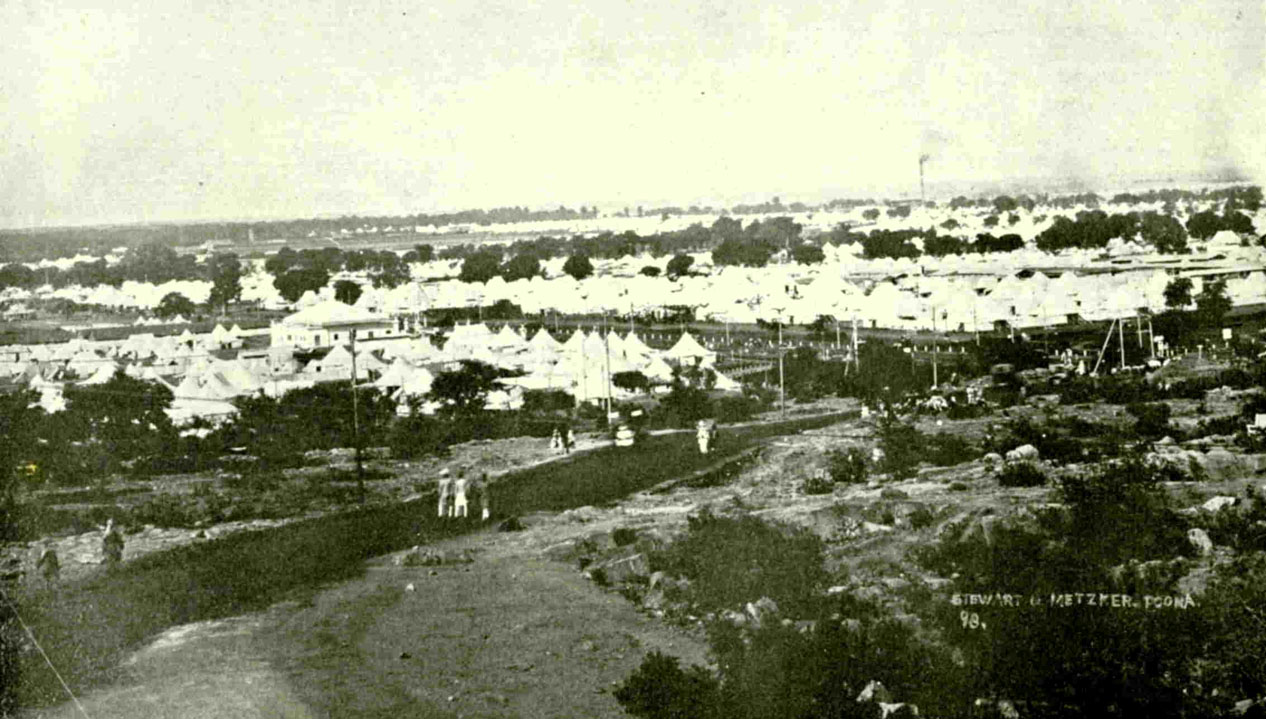 One of the many large camps at the Durbar site.

narrow-gauge railway lines and stations and required every sort of facility like post offices telegraphs bazaars medical facilities and water and sanitation systems. The scale of the organisation was incredible and required a degree management that is truly impressive and a great testimony to the ability of the large organising team tasked to get the whole thing underway. It was estimated in the end that over a quarter of a million people visited the Durbar site – and all might require transport, food and drink. Complex rehearsals and military drills were spread over months before the event and involved tens of thousands of soldiers. Equally impressive were the events organised from day to day, not least the grand march past by British Indian regiments and British troops garrisoned in India, the Indian Volunteers and the armies of the Indian Princely States.

The King and Queen set sail from Southampton on 11th November 1911 escorted by a Royal Navy “Special Service” squadron and landed in Bombay on 2nd December. They reached Delhi on 7th December and then began ten days of daily festivities and spectacle – which the King and Queen unsurprisingly soon found to be arduous and demanding. The schedule of official events (not including the many private functions and social gatherings that were arranged) was :

December 7th –  State entry of Emperor and Empress to Delhi.
Grand Procession into the City and onto Delhi Ridge.
Reception of the Ruling Prices in the evening.

December 8th –  Reception by the King-Emperor for 17 major Indian Princes.
Memorial Ceremony for Edward VII and dedication of his statue.

December 9th –  Reception by the King-Emperor for Indian Princes.
Football and Polo tournament sin the afternoon.
Grand Tattoo by the massed military bands in the evening.

December 10th –  Church service in the Military Camp; sermon by the Bishop of Madras.

December 12th –  “The Great Durbar” – formal coronation ceremonial before a vast  assembly of spectators.
Proclamation of Delhi as new capital of India.
State Banquet in the evening.
Reception in the Royal Camp.

December 15th –  Laying the foundation stone of the new capital at Delhi.
Review of the Indian Police.
The Grand Durbar Military Tournament amongst which were:
An Obstacle Course and Mock Attack – 1/West Riding Regt.
A “Musical Ride” by 17th Lancers.
Horsemanship display by 18th KGO Lancers
A “Musical Ride” by “R” Battery RHA.
Point-to-Point races.

December 16th –  Meeting with religious leaders of all denominations.
Royal departure at Noon – the Emperor for Nepal and the Empress to Agra.

At the conclusion of all this the Allahabad Pioneer noted ; “The great Durbar with all its pomp and magnificence and its spelndid spectacular effects has come to an end. Already the camps are dissolving and farewell salutes indicate the departure of chiefs hastening back to their States. … And of all those who have worked so long to secure that this Durbar should surpass those that have gone before in the perfection of its arrangements and its completeness in every sense what shall be said? This only – that their success has been absolute and supreme.” 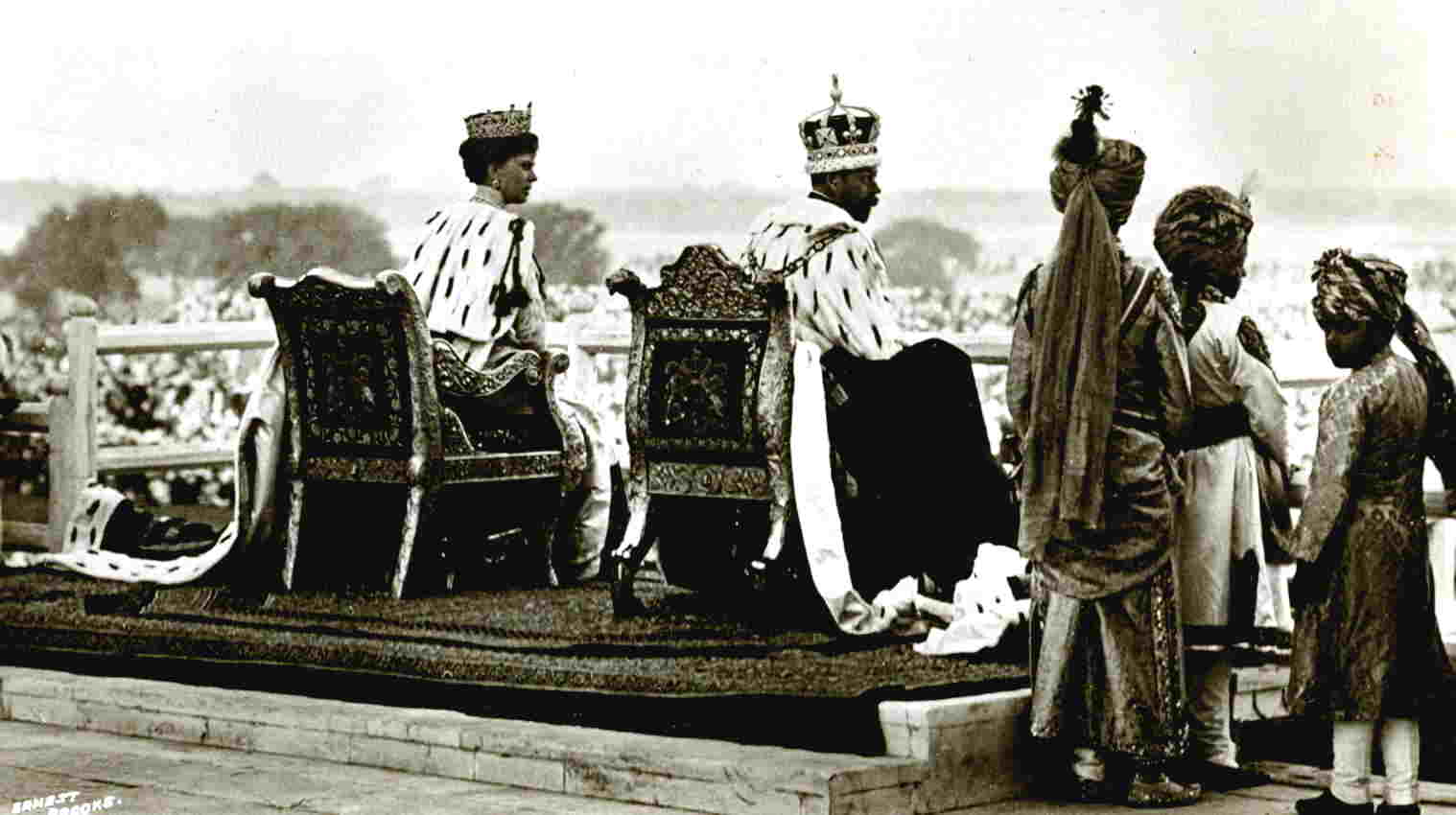 The King-Emperor and Queen-Empress sduring the ceremonies.

As in 1877 and 1903 gold and silver medals struck in the Calcutta Mint  were awarded to those who worked for or participated in the Durbar celebrations – again on a selective basis albeit with a freer hand than in either of the earlier events. Approx. 118 were produced in gold (largely for award to Indian rulers) and approx. 26,800 in silver. 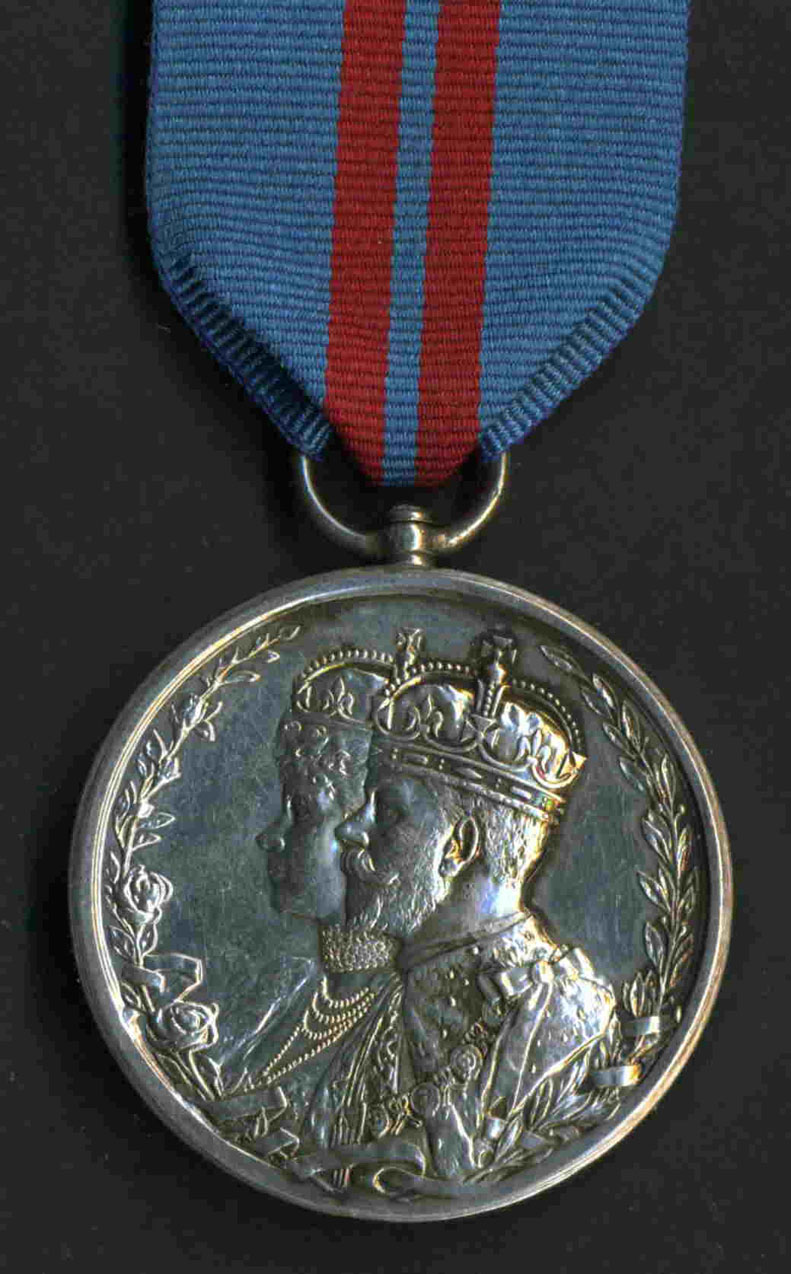 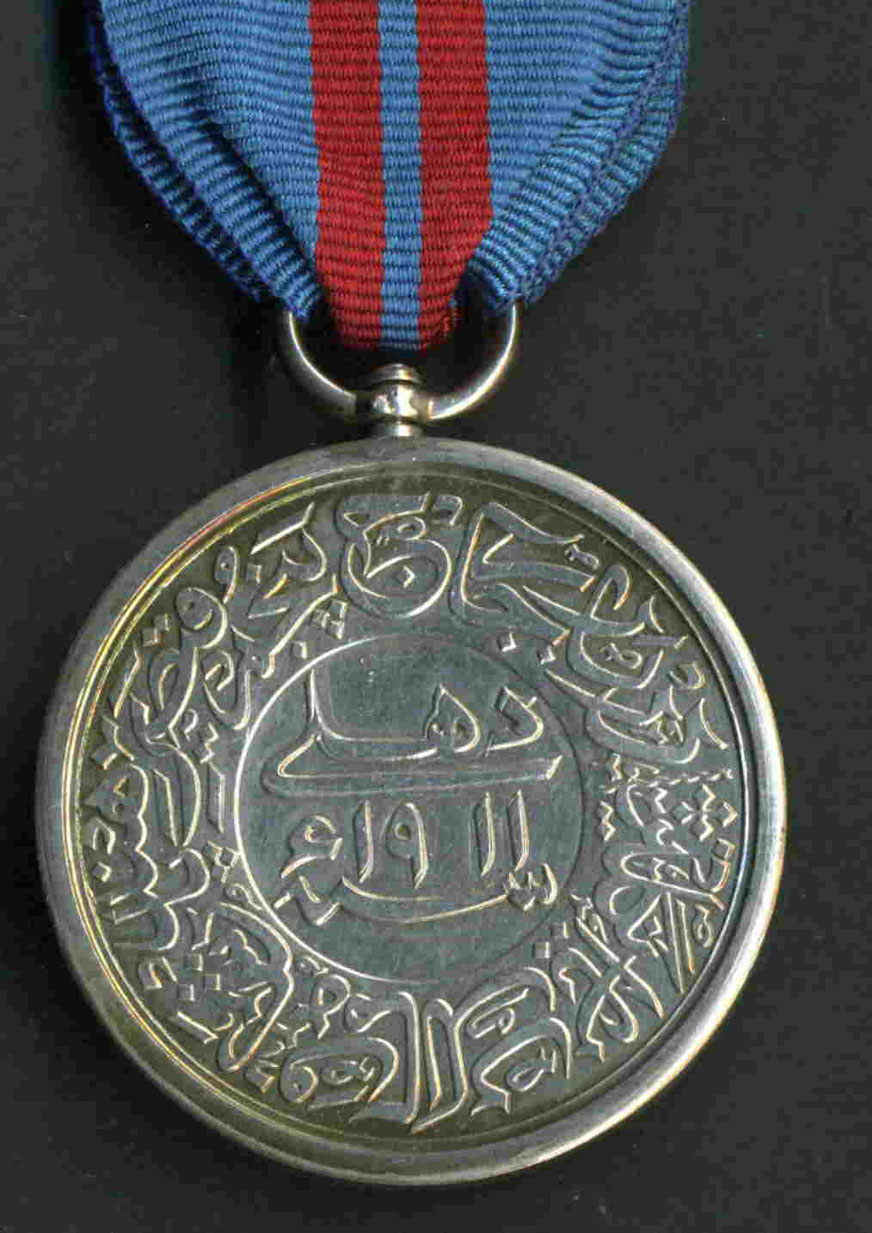 The medal at 1.5 inches diameter was larger than the 1911 British Coronation medal. It  bore on the obverse the conjoined busts of King George V and Queen Mary in robes of state without wording or abbreviated titles (exactly as on the British version) and on the reverse a calligraphic Farsi inscription reading The Durbar of George V Emperor of India Lord and Master of the British Lands surrounding Delhi 1911 in the centre. All were issued unnamed but it is common to see them personalised by being engraved or locally impressed in a variety of styles.

Interestingly, those potential recipients who had been present in the earlier coronation celebrations in Britain and had received the British coronation medal were not allowed to receive the Delhi Durbar medal as well. Instead, they were simply given a silver clasp bearing the crowned word Delhi to wear on the ribbon of the British medal. Examples are very rare, with only about 134 known to have been awarded to recipients – mainly Indian

Group to Shahwali Khan, one of the State Trumpeters at both Durbars.

The Durbar medals were also given to some of the Royal Navy and Royal Marine personnel aboard the detached squadron which conveyed the King and Queen to and from India – HMS Medina, Cochrane, Argyll, Defence, and Natal – and many of these were personally presented by the King at a ceremony aboard HMS Medina in 1912 after his return to England. The Indian Police and a large number of civilians involved in the Delhi organisation and in coronation celebrations all over India (not just in Delhi) were also awarded the 1911 medal but there seem to be no surviving rolls for these recipients. Some ladies, mainly the wives and daughters of Indian Army officers and government officials as invited guests, also received a medal.

CB and Medal group with 1911 Durbar Medal. Brigadier E. H. Rodwell. Presented with the CB insignia at the Durbar.

Numerically the most awards per British regiment went to those which received new Colours on December 11th (see above) and to the larger Corps like the Royal Artillery (to whom 633 medals were awarded). For the rest there were generally set regimental allocations – usually (though it varies) one medal for the Commanding Officer, one for the Second-in-Command, one for the Adjutant and one each for the RSM, the senior NCO and the longest serving Private. Often more were actually given – the opportunity was taken to reward men for meritorious service (and not just associated with the Durbar) so that regimental numbers vary from only a few (e.g. just one officer and two men of the 2nd East Surreys) to a good presentative section of the regiment – like the 12 officers and 204 men of the 1st Highland Light Infantry who received the medal. There must have been some dissatisfaction that only some men in a regiment got the award while most did not – having been present in the same event – which probably accounts for the fact that one often sees “unconfirmed” Delhi Durbar medals in medal groups, presumably self-awarded by those who were actually present and considered that they were entitled to wear the medal. 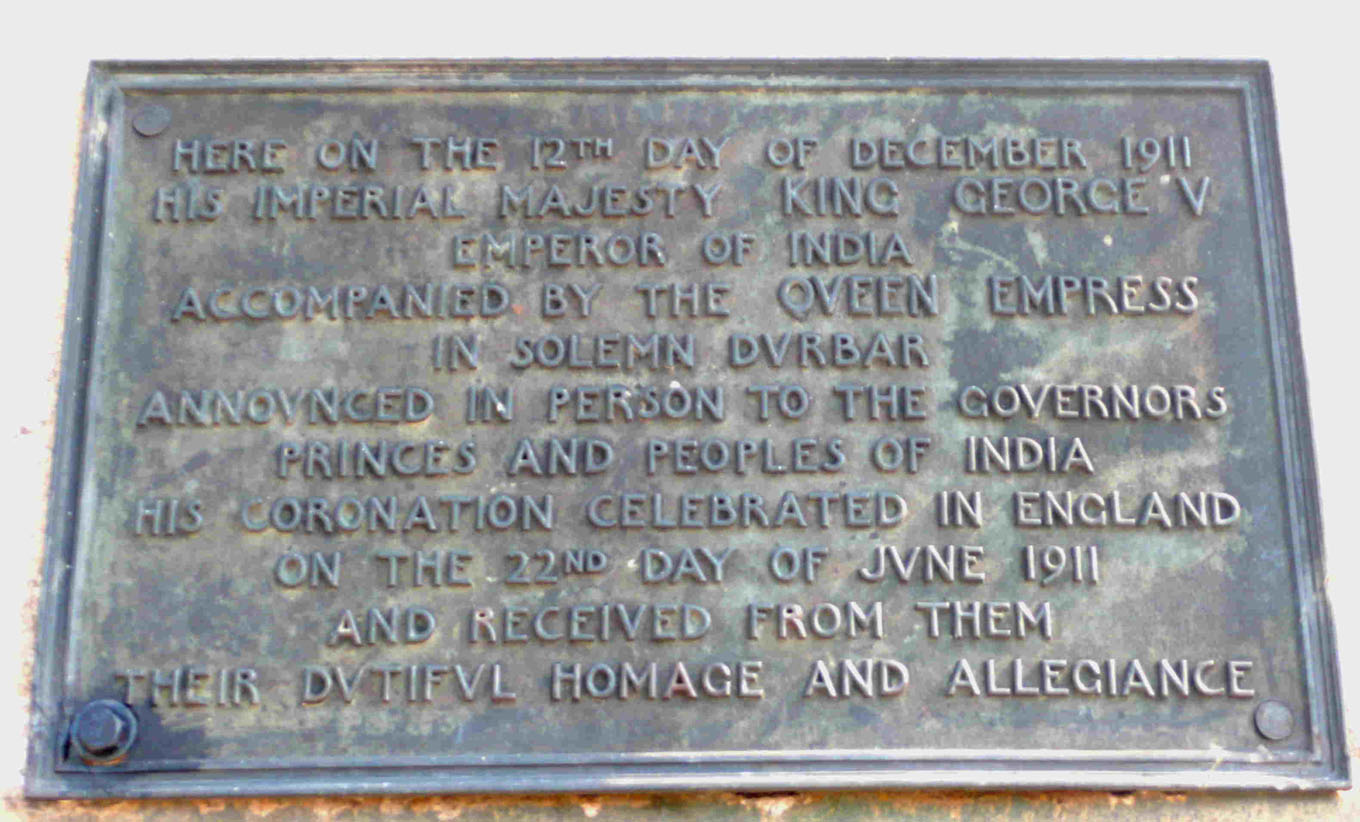 Commemorative Plaque on the site.