The Hong Kong Plague 1894 and its Medal. 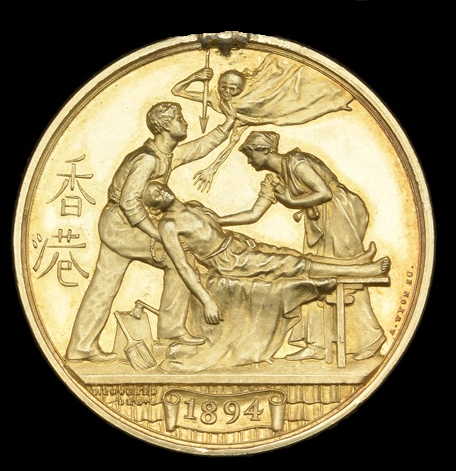 In 1894 the British Crown Colony of Hong Kong was hit by a severe outbreak of the dreaded bubonic plague – the notorious “Black Death” which had devastated Europe in the 1340s and which was a regular and devastating visitor thereafter. It was early in May 1894 that the first signs of the disease began to appear in the colony, having already spread across mainland China from its starting point in Canton. During the course of the outbreak, tens of thousands were to die in China and over 3000 in Hong Kong before the epidemic subsided in July.

The disease took hold in the poorest, most overcrowded and insanitary suburbs of the port, especially in the district of Taiping Shan (which was shortly afterwards completely demolished) and was spread, amongst other ways, by panic-stricken individuals and families fleeing from the disease in their street and taking it with them to new areas.

The colonial government was at first at a loss to work out how to stop and then tackle the spread of the plague, since both their knowledge of exactly what they could do and their medical resources were limited. Large, isolated, commercial warehouses were stripped out to become temporary plague hospitals, though these initially lacked any sort of medical facility and were often themselves overcrowded and insanitary. The administration quickly and gladly accepted offers of help that came in from military and naval forces based in the colony. These included naval personnel from the warships in the harbour, soldiers on garrison duty, including Royal Engineers, local policemen, a few military nurses and all sorts of civilian volunteers, European, Indian and Chinese, including local doctors, nurses, lawyers, government officials, traders, customs officers etc. The work they opted to do was dirty, difficult and dangerous in the extreme.

The largest military formation in the colony was a British infantry battalion, the 1st Battalion of the King’s Shropshire Light Infantry. After a few years in Malta, interspersed with campaign service at Suakin on the Red Sea in 1885-86, the battalion had been made “up to strength” of about 1,000 officers and men and arrived in Hong Kong in January 1892 on a routine deployment on what should have been a peaceful tour of imperial duty. 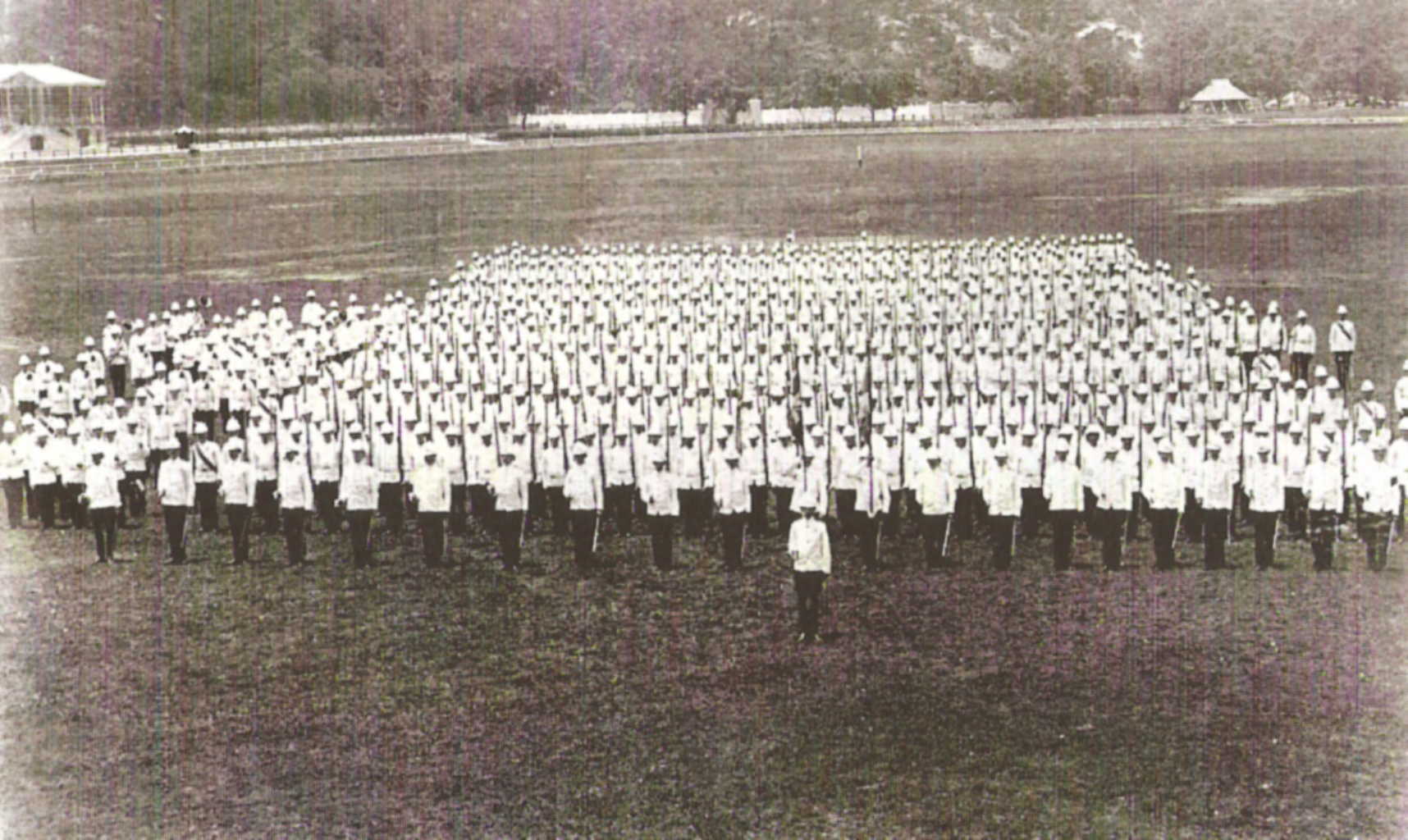 The volunteers of the KSLI – apparently about 600 in number but no full roll survives – were housed in quarantined tented accommodation well away from the populated and infected areas. The KSLI volunteers – and it is presumed that other volunteer groups followed a similar routine – were split up into working parties of about 12 men under a Sergeant, with officers controlling groups of working parties. A strict regime of disinfecting and control was imposed; before setting out each day, the men stripped off in a separate room, were washed down with disinfectant and donned a set of loose working clothes.

The work these men did – KSLI and others – was dangerous and unpleasant. The first party would search through the houses in crowded, infected streets, looking for sick people and families and, inevitably, for dead bodies. The bodies were put into carts and as each cart filled, the soldiers in charge took the cart to an isolated place chosen for mass cremations. 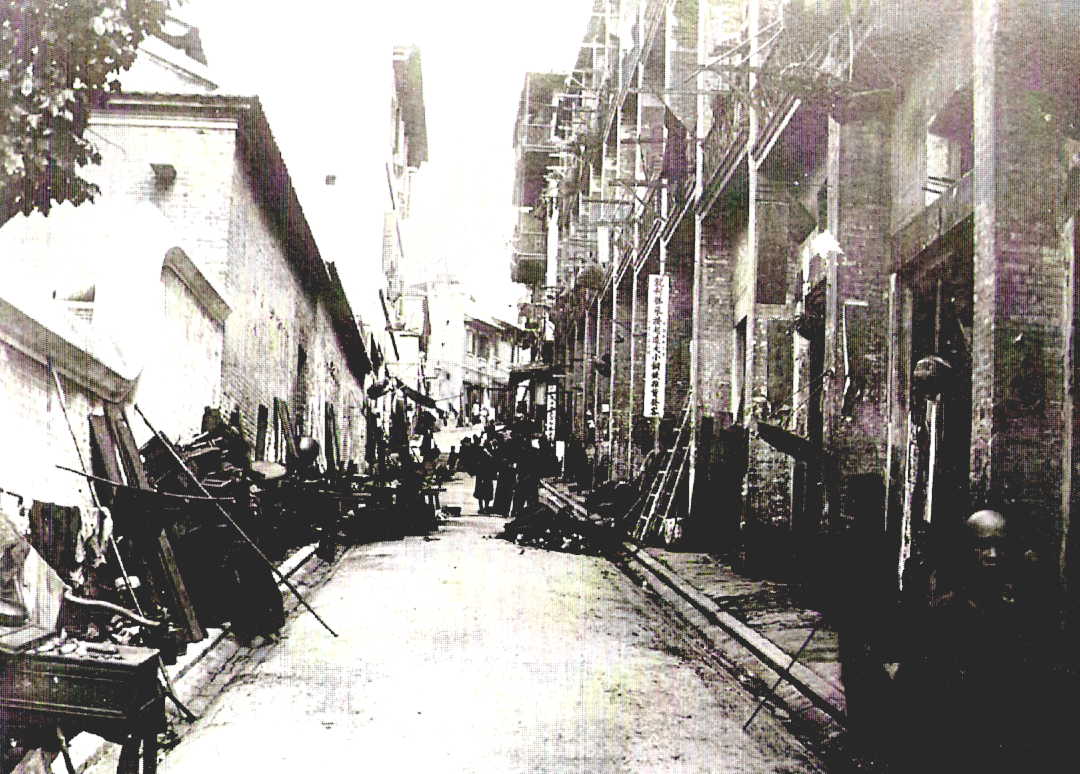 Street scene in the infected area

Having worked its way down a particular street, the first search party was followed by a Cleansing Party, which emptied the house of beds and bedding, clothing and other possibly infected property, which was burned in the street; they then cleansed the infected house with disinfectant and lime wash – hence their nickname “the Whitewash Brigade”. Every affected house in every street had to be dealt with in the same way, one by one, until whole districts were deemed to be free of the disease. It was an arduous and gruesome task. 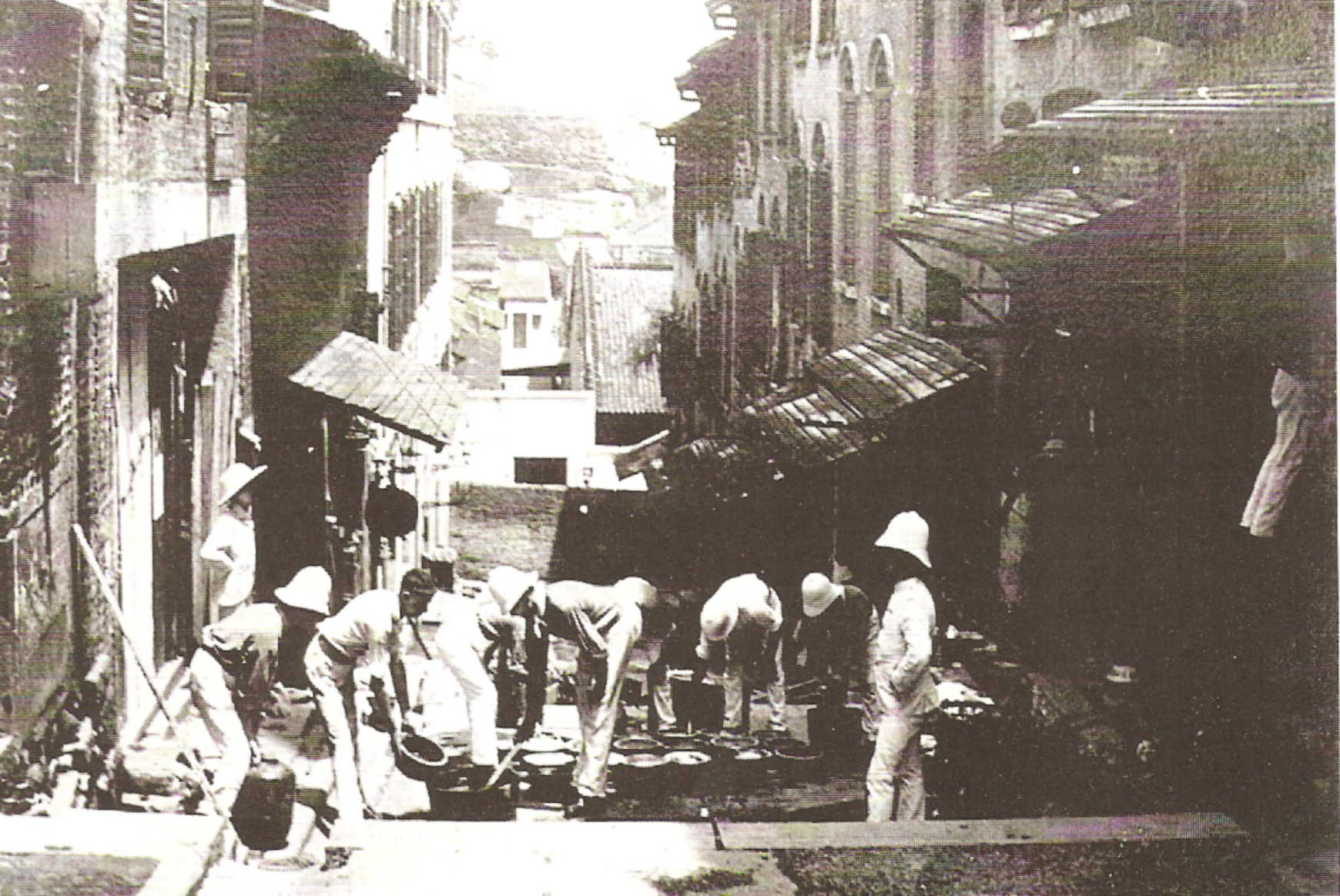 At the end of the day, the KSLI volunteers returned to their quarantined camp, stripped off their working clothes (which were usually boiled or even burned), were disinfected and washed and, in another room, changed back into their usual clothes.

Because of the stringent precautions taken, only ten men of the KSLI contracted the “Black Death” and only one officer (Captain Vesey) and one soldier actually died of the disease. The services of the KSLI were brought to notice in Parliament and the regiment received the thanks of the Colonial Secretary in London and, unsurprisingly, of the colonial government. 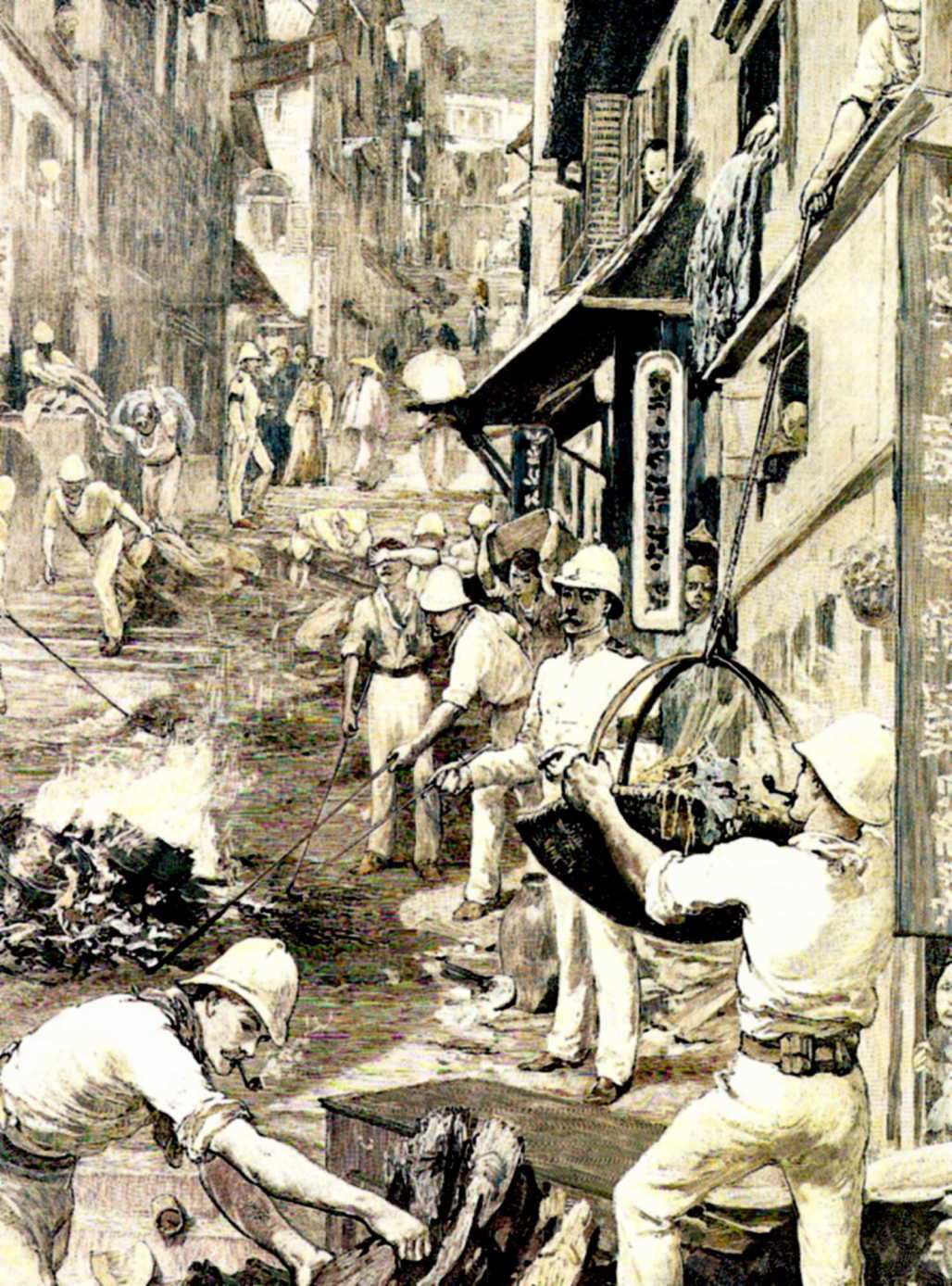 From “The Illustrated London News”

At a special assembly on 5th December 1894, the volunteers were paraded before the Governor and the Chief Justice of Hong Kong, Mr. Ackroyd, said of the KSLI that “the regiment has a distinguished record which is proudly displayed on its colours… Of these records it is justly proud, but I think the day to day fight with the disease in Taipingshan in the summer of 1894 will, for courage, endurance and devotedness, compare with all their other achievements.” A committee had been quickly formed in Hong Kong and, working via representatives in London, invited artists to submit designs for a possible “plague medal” as a reward for the volunteers. Seventeen designs were submitted, of which four appeared on public display in the Royal Academy in 1895. The accepted design was done by “Mr. Bowcher” and the dies for the medal prepared by Allan Wyon FSA – another of the famous Wyon family of medallists and designers.

Since this article concerns the medal, it may be of interest to say that its designer, Frank Bowcher (1864-1938) was (or became) a distinguished medallist and sculptor. The son of the etcher and draughtsman Henry Bowcher, he trained at the National Art Training School in Kensington and in Paris. His career took off after he produced a medallic portrait of the Khedive of Egypt in 1886 and as a result, in 1887, the Royal Mint commissioned him to produce designs for the Egyptian coinage. After that he received similar numismatic commissions – from the City of London for the visit of the King and Queen of Denmark, for the Opening of Tower Bridge and for the 1897 Diamond Jubilee; from the Geological Society for the Joseph Prestwich medal and from the Royal College of Science for the Thomas Huxley memorial medal. In 1903, Bowcher stepped in to finish the Great Seal of Edward VII. He was later one of the founder-members of the Royal Society of British Sculptors, worked on church decoration and memorials and was a regular exhibitor at the Royal Academy. As his obituary in The Times noted, “He was a prolific artist, but as a great deal of his work was small in scale it was not very familiar to the public…. his reputation was made chiefly as a medallist and designer of seals”.

Each officer and man of the KSLI (and the other various volunteers) was given one of the specially-produced medals to commemorate their service. The officers received their medal in solid gold and it is believed that fewer than 50 of this type were conferred; all the others were in silver. The medals had an integral (small) suspension loop at the top and were hung from a striking “specially designed” red and yellow striped ribbon; they were named around the rim in small, impressed, block capitals. It is believed that the gold medals were usually awarded in a fitted morocco case and had no suspension fitting. Because no full roll of recipients exists, it is impossible to say exactly how many silver awards were given out, but it cannot have been much more than 700. 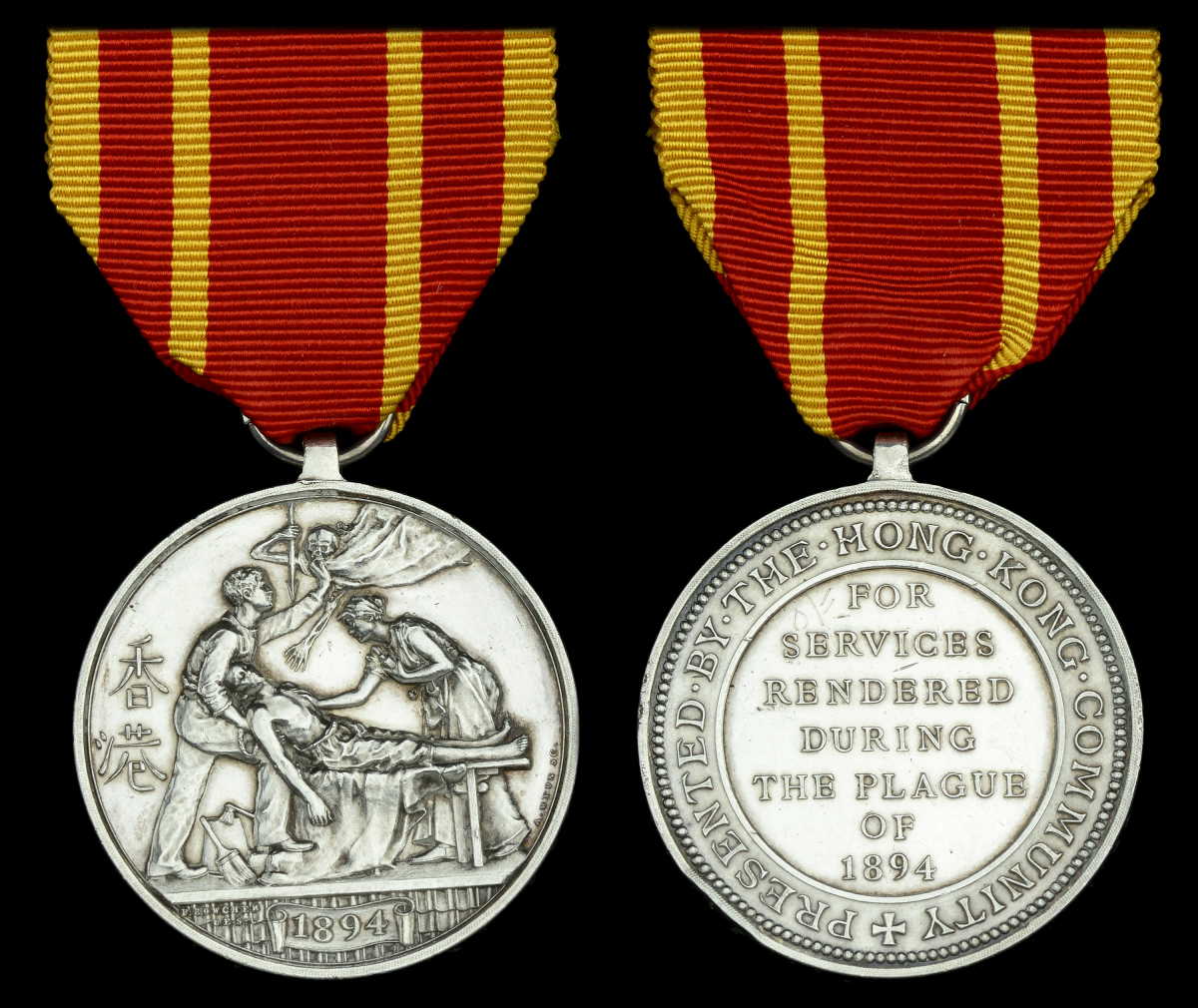 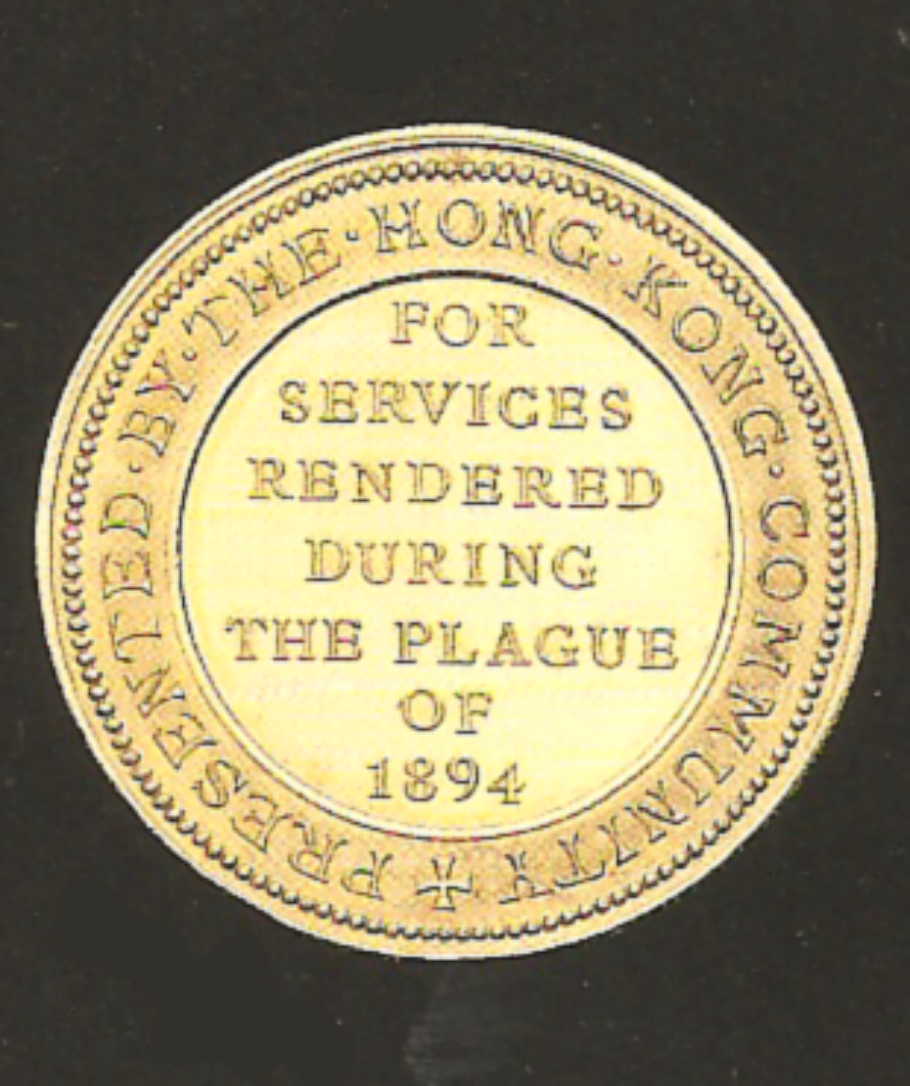 Of standard size, the medal featured on its obverse a dramatic scene showing a doctor (or soldier) with a nurse, tending “a sick China -man” and warding off a skeletal figure representing “Death”, which floats in the air nearby, attempting to strike the victim with a spear. The “tools of the trade” of the volunteers – a tar brush and bucket and a whitewash brush – are depicted on the ground. The Chinese characters for “Hong Kong” and a Chinese scroll bearing “1894” are also shown. The reverse simply has the wording “FOR / SERVICES / RENDERED / DURING / THE PLAGUE / OF / 1894” surrounded by a band inscribed “PRESENTED BY THE HONG KONG COMMUNITY”. The medal was first illustrated in Spinks’ “War Medal Record” in March 1896. 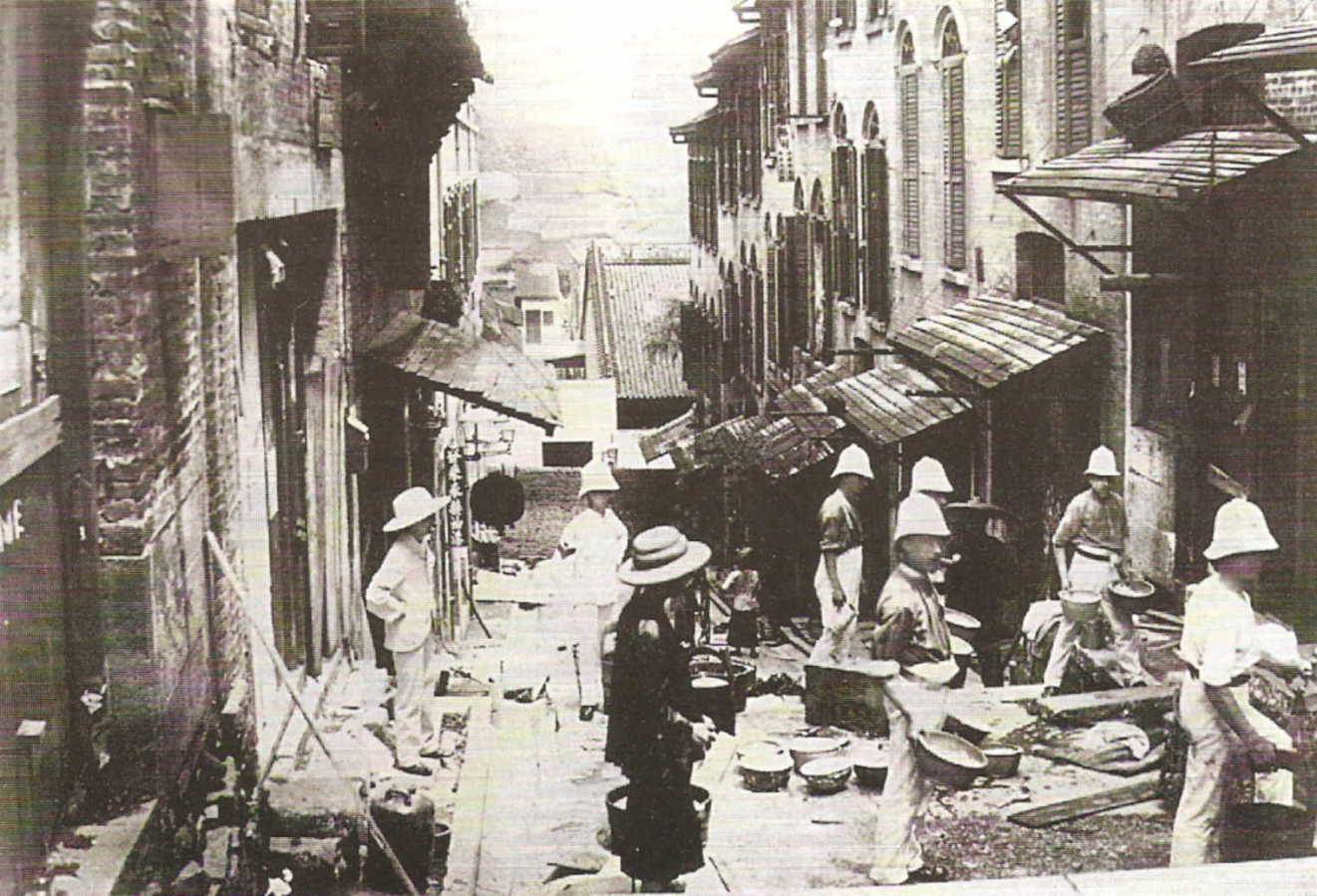 Sad to say, the medal, as the gift of a colonial government and not one proceeding from the state or monarch as “the fount of honour”, was not authorised for wear by serving soldiers or sailors. They could accept and retain the medal as a commemorative or gift, but could not wear it in uniform alongside any other “official” service medals they may have been awarded. As a result, many must have been separated from other awards and lost over years and certainly, apart from those which survive as issued, some to KSLI recipients are found adapted in various ways – as fobs to hang from a watch chain, as brooches to be worn by wives or sweethearts or as decorative additions set into cigarette case lids or other boxes etc. The medals have always been rather rare as collectors’ items, the gold ones exceptionally so.

As a footnote, on 23rd December 1894, 1/KSLI left Hong Kong for another round of imperial duty, taking it this time to India. Sadly enough, it soon became involved “in aid of the civil power” in dealing with another serious outbreak of disease, in this case of cholera in Poona and Sitapur.

[Photos of KSLI from the Regimental Museum in Shrewsbury Castle, with permission]