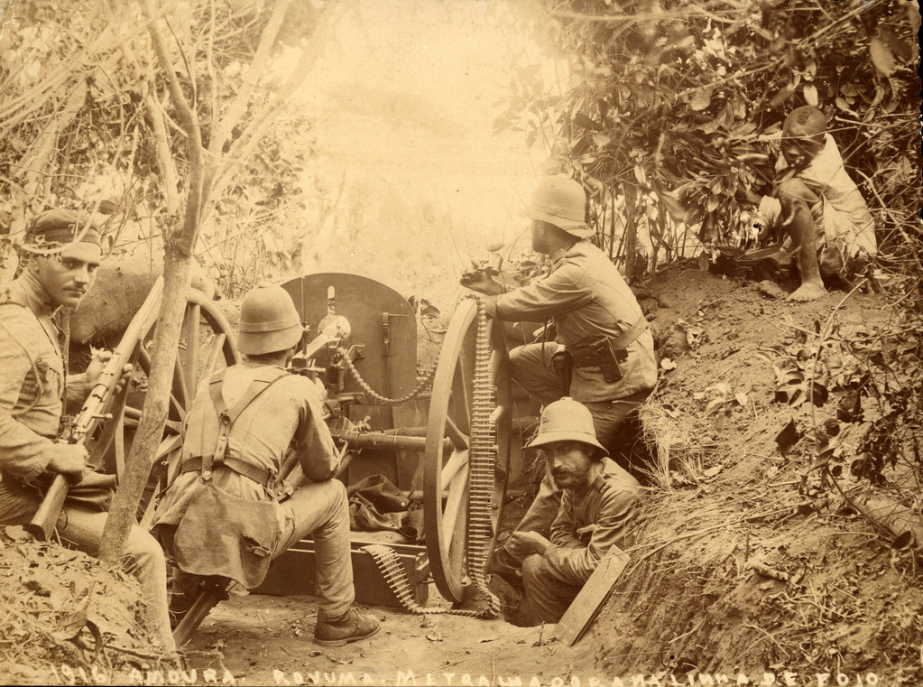 Although it had been hoped that the developing European war would not engulf the smaller territories of the colonial powers and that their overseas possessions might remain neutral by agreement, the war against the Germans in East Africa began very early (August 1914) and ended very late – 25 November 1918, after the end of the war in Europe. 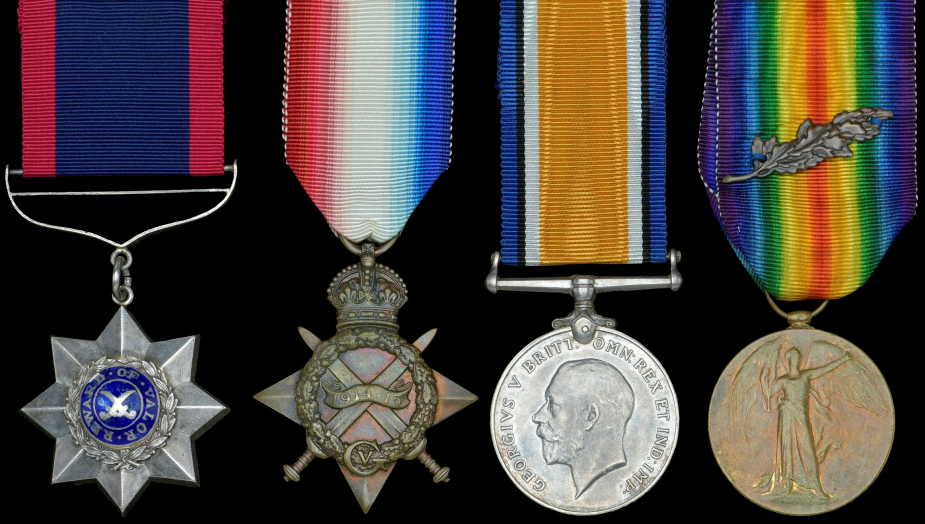 Group with the Indian Order of Merit, 2nd Cl., (left) to a soldier of 2nd Kashmir Infantry for gallantry in the disastrous action at Tanga, 4 Nov. 1914.

As early as 5 August 1914, troops from Uganda protectorate attacked German outposts near Lake Victoria and on the very same day, the British Cabinet ordered an Indian Expeditionary Force (IEF) to be sent to East Africa. Naval operations by and against the German commerce raider SMS Konigsberg also began. There were therefore both land and sea operations from the very earliest days of the war but the forces of all arms which served in these actions received as a campaign award the general 1914-15 Star – not the 1914 Star which was reserved exclusively for service on the Western Front. They would also earn the standard silver British War Medal and the Victory Medal and many, actively engaged only after January 1916, received just the British War and Victory Medals. 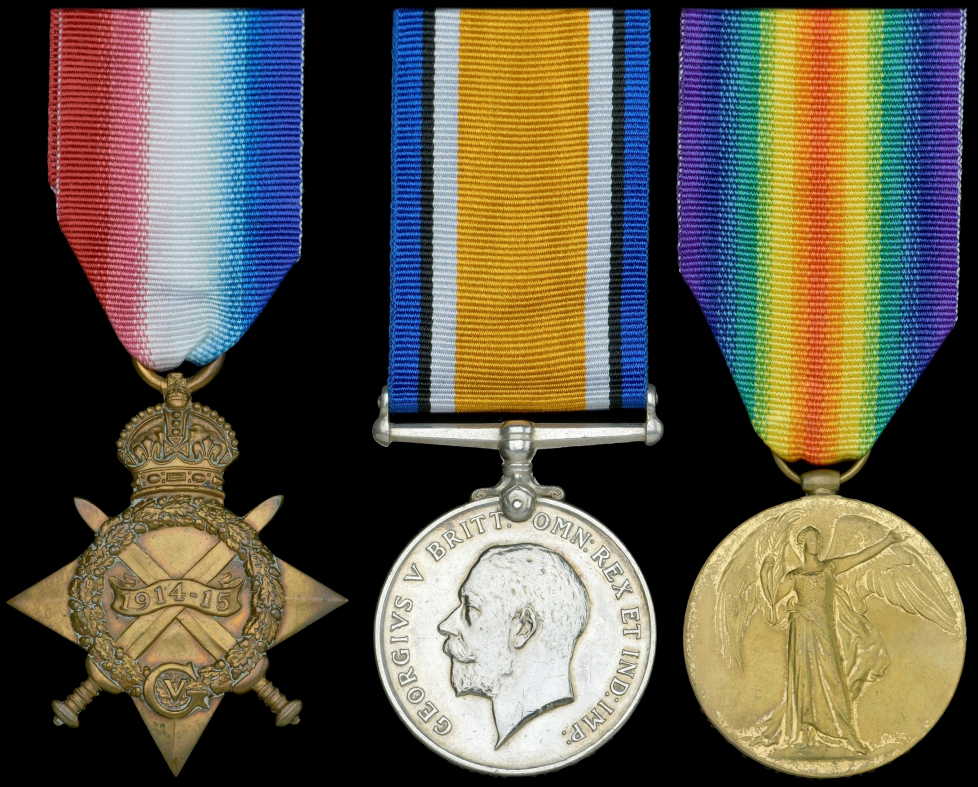 The standard ‘1915 Trio’ as awarded to many British, Indian and Imperial forces for service in east Africa.

The only variant in the general British award for campaign service was the Victory Medal which was awarded to South African personnel. Indian troops fighting in East Africa – and some of them from the earliest days of the campaign in 1914 – were withdrawn with just a few exceptions by the middle of 1917 and the main Imperial commitment, apart from comparatively few British combatant units, was that of South African forces. The first South African Expeditionary Force arrived in February 1916 and between 1916-1918, as its commitment was expanded, it was South African forces, black and white, which gradually bore the brunt of the action.

The bilingual reverse of the South African Victory Medal.

The Victory Medal awarded to South Africans was the same as the general British type except that it replaced the usual reverse legend THE GREAT WAR FOR CIVILISATION with a bi-lingual version, with the same text in English and Dutch: DIE GROTE OORLOG VOOR DIE BESCHAVING. It is estimated that approx. 75,000 were awarded, so the medal is not difficult to find on the market.

After the war, when the award of war medals was being considered, it was proposed to issue campaign and battle clasps for the British War Medal, reflecting earlier practice, as with the Queen’s South Africa with its 26 clasps – an idea which would certainly have made these medals more interesting to the collector. However, on the grounds of cost and complexity the whole idea was abandoned and no clasps were issued with the British War Medal. The Army had proposed no fewer than 79 clasps, though the exact details of what they would have been were not published; some undoubtedly would have related to actions in East Africa.

The Admiralty proposed 68 different clasps and their details were made public. They would have included Konigsberg July 1915 (for the destruction of the German commerce raider in the Rufigi Delta) and German East Africa for the naval operations along the coast and on the Great Lakes. Since details of the naval clasps were published, one sometimes finds miniature British War Medals with these clasps affixed, purchased by their wearer from military tailors. Some of these miniatures are very difficult to find nowadays, especially for the small-scale actions which would not have produced much demand, but examples can be found for tens of pounds; those with a named provenance can be much more expensive and add a certain historic cachet to the group.

Although the British campaign in the German colony of East Africa was waged by British and Imperial forces (drawn from India, Rhodesia, West Africa and South Africa) supported by literally hundreds of thousands of local African porters and labourers, we should not forget that other colonial powers were involved. Belgium, for example, held territory forming the eastern frontier of its huge Congo empire, to the west of German East Africa. Initially a neutral territory, the Belgian Congo was drawn into active participation when the Germans bombarded Belgian settlements on Lake Tanganyika in 1914. Belgian colonial forces then occupied the German territories of Ruanda and Urundi (now the states of Rwanda and Burundi). From 1916, Belgian forces played an active part in operations east of Lake Tanganyika and took part in the capture of Kigoma, Tabora and Mahenge but their effective participation in the developing campaign ceased by the end of 1917 when they agreed to restrict their activities to Ruanda-Urundi. By then, Belgian-African forces controlled almost a third of the German colony, mainly the lands to the west, between Lakes Tanganyika and Victoria. 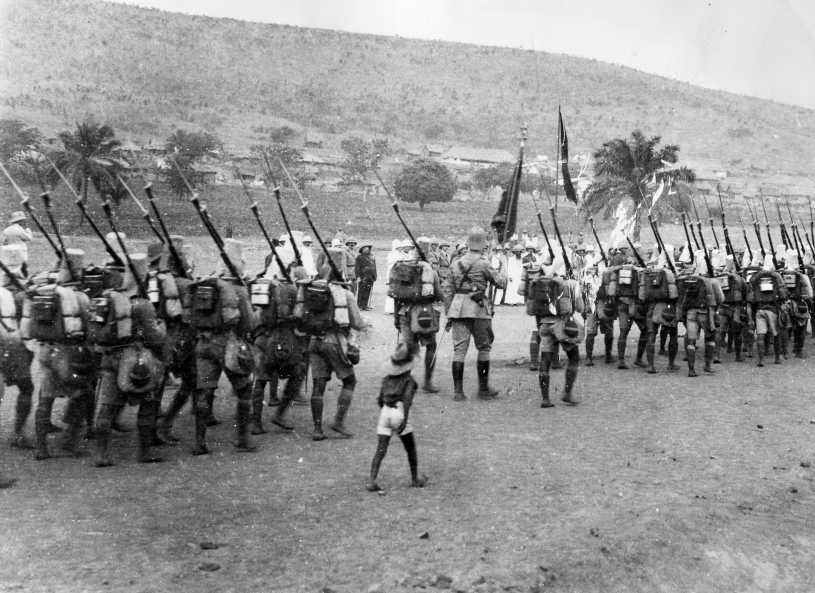 Portuguese soldiers in East Africa – native Other Ranks with European officers, as was common to the forces of the colonial powers.

There was some fear on the part of the British authorities that Belgium might seek greater territorial gains in the area if they played a more active role but after the war, under mandate of the League of Nations and later the UN, Belgium was granted control of Ruanda-Urundi which they exercised until 1962. Belgian forces suffered over 5,000 casualties during the campaign including over 2,000 soldiers killed in action or died of disease along with 15,650 deaths amongst its porters.

The Belgian Order of the Lion, 4th Class (Knight) – an Order awarded for service in Africa.

The Belgian Order of the Star of Africa, 5th Class (Officer) grade.

In terms of campaign awards, apart from their general issue of combat medals for World War One, which would have been awarded to its forces engaged in East Africa, Belgium authorised in 1917 the Commemorative Medal for the African Campaigns, covering 1914-16 and later extended in date to cover service in East Africa into 1917. There were two forms of the medal – in silver for European recipients and in bronze for Africans. It was awarded to those who had seen active service in West Africa (Cameroons campaign), in German East Africa and in Northern Rhodesia. 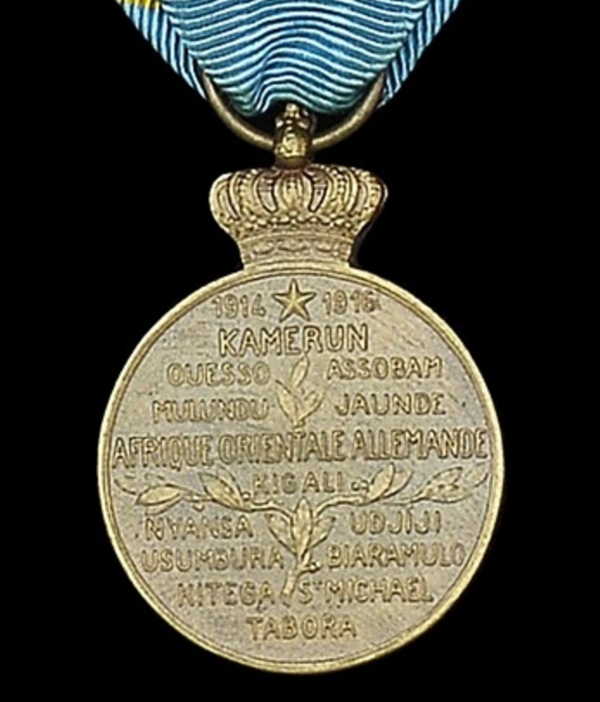 The reverse of the Belgian medal for Africa, showing actions in West and East Africa which were commemorated.

The medal featured on its obverse a seated lion (presumably representing Africa) with its paws on a rock; the reverse had 1914-16 with two laurel branches and the areas in which the troops had been engaged. Interestingly, a proposal in 1931 that the dates on the reverse should be altered to reflect the actual years of Belgian participation was never put into effect since by that time all the medals had been issued and a recall or re-issue was not deemed to be feasible. The ribbon, pale blue with yellow edges, is suspended from a royal crown above the medal. Only one clasp was issued with this medal, Mahenge, granted to those engaged in the significant action there in October 1917. Though not an expensive medal on the market, examples are rather difficult to find.

The 1935 Belgian Colonial Medal for Africa.

As late as June 1935, the Belgians instituted a Colonial Medal for 1914-18 service, which was a civilian equivalent of the Commemorative Medal for the African Campaigns. It was awarded to colonial officials, civil servants, medical staff and others who had been engaged in the operations in and around Belgium’s African empire. The medal, which had to be purchased by its recipients, took the form of a bronze-gilt medal showing a five-pointed star with the Lion of Belgium in the centre. They carried a narrow bar bearing dates 1914-18 on the ribbon, which comprised black, yellow and red stripes with a wide central blue band. Examples of this medal, like the Commemorative Medal, are not particularly expensive but are equally difficult to find.

Initially neutral, Portugal, like Belgium, was drawn into the East African campaign by virtue of the proximity of its own east African territory, Mozambique, to the German colony. As early as August 1914, a small German force had attacked a Portuguese outpost at Maziua in Mozambique, causing the first Portuguese battle casualties of World War I. In 1915, 3000 reinforcements, carried in British ships, were sent from Portugal to Mozambique and began a very small-scale operation in the south of German East Africa. However, not until 1916 did Portugal actually declare war on Germany and in November 1917 the remnant German forces under von Lettow-Vorbeck, in the last extremes of the campaign, began to cross into Mozambique and a series of actions took place. Strategically insignificant, they did allow the Germans to seize important dumps of arms and replenish their supplies following small-scale successes against Portuguese outposts. Crossing from Mozambique into Northern Rhodesia, von Lettow-Vorbeck eventually surrendered what was left of his army at Abercorn on 25 November 1918. By the Treaty of Versailles, the German port of Kionga was ceded to Portugal – the only territorial gain to reward their participation in World War I on the Allied side. Portuguese casualties in East Africa amounted to over 5,500 killed, 5,600 missing or captured and an unknown but presumably large number of wounded.

Like Belgium and the other Powers engaged in the campaign Portugal had a well-established series of decorations and honours – indeed, some of the oldest in Europe, like the Military Order of St. Bendict of Aviz (1162) and the Order of Christ (1317) amongst many others – which could reward gallant or distinguished service during the war. 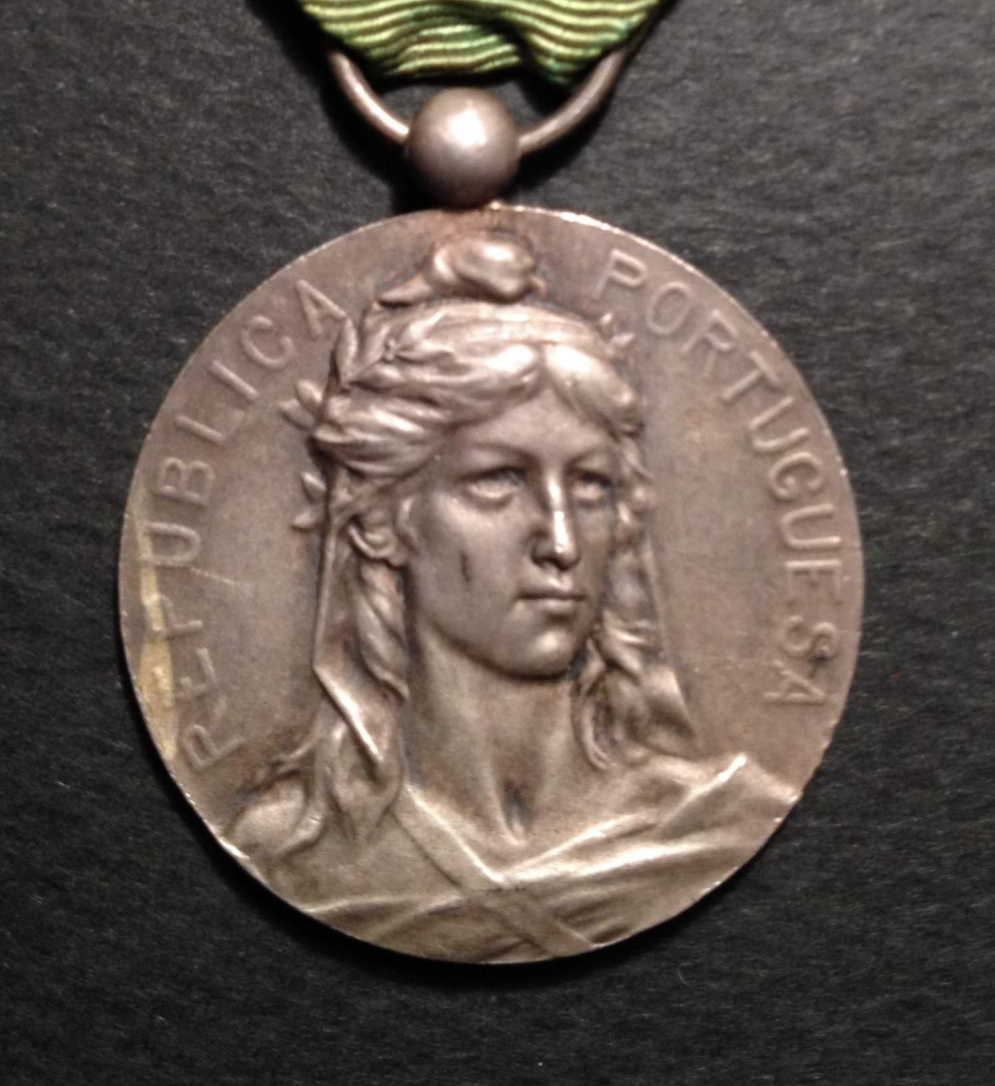 The obverse of the 1916 Portuguese campaign medal . Silver type. 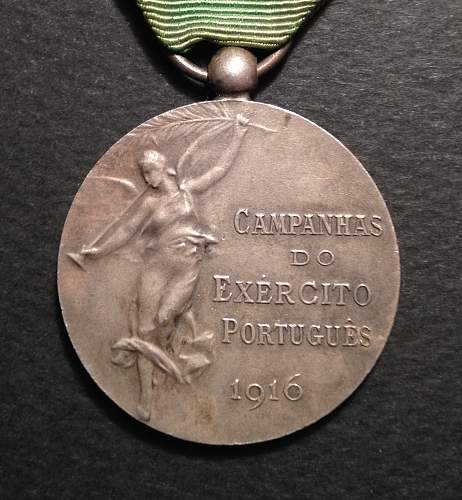 The reverse of the 1916 Portuguese medal.

In terms of general campaign awards, the Portuguese – whose larger combatant role in the Great War is not very widely known – instituted their own overseas’ War Medal as early as March 1916. Awarded in gold for senior officers, silver officers below the rank of Colonel and bronze for the rest, the medal has variant designs but the 1916 version bore an allegorical female head and REPUBLICA PORTUGUESA, while the reverse carried a winged “Victory” blowing a trumpet, with the legend CAMPANHOS DE EXERCITO PORTUGUES 1916 (Campaigns of the Portuguese Army 1916). It carried a range of clasps for various theatres of war and retrospectively for pre-war colonial operations and included some for Portuguese actions in East Africa.

One clasp for service against German East Africa and the German incursions late in the war was MOCAMBIQUE 1914 A 18, though unofficial clasps like MOCAMBIQUE 1914-15 are seen. Two ribbons were used on this medal – green with red edges for combatant recipients and white with red edges for non-combatants. A second version – and very different – was issued in 1921, again with various clasps, including those for East Africa. 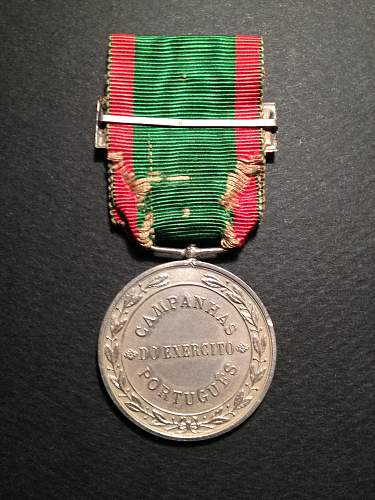 The obverse of the standard (post 1921) type of Portuguese campaign medal – the type most commonly seen.

Different ribbon emblems were conferred for those “mentioned in dispatches”, for those wounded and for those promoted for bravery. The medals and clasps are not very common on the British market.

Belgian and Portuguese recipients also, of course, received the respective Victory Medal of their countries.