“For the Siege of Khartoum” 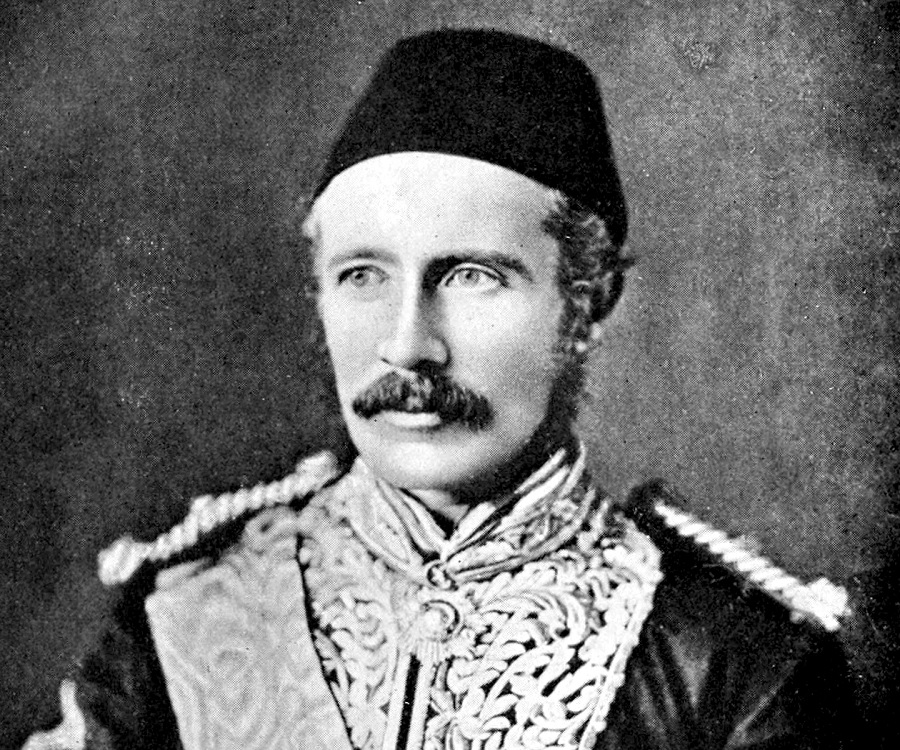 Many people who are not so familiar with the detail of Britain’s military history tend to have heard the name of ‘Gordon of Khartoum’ – much as they might recognise ‘Lawrence of Arabia’ as a term. General Charles Gordon’s skilful but ultimately unsuccessful defence of Khartoum, the administrative capital of the Egyptian province of the Sudan in 1884-85, became one of the most famous incidents of its day. ‘Chinese’ Gordon’s investment in the city led to the belated dispatch of the Nile Expedition under Sir Garnet Wolseley which, despite fighting serious actions at Abu Klea, Gubat and Kirbekan, failed to rescue Gordon and save the Egyptian garrison and inhabitants of Khartoum; in January 1885 the city fell to the Islamic forces of Mohammed Ahme, ‘the Mahdi’, Gordon was killed and the city devastated. 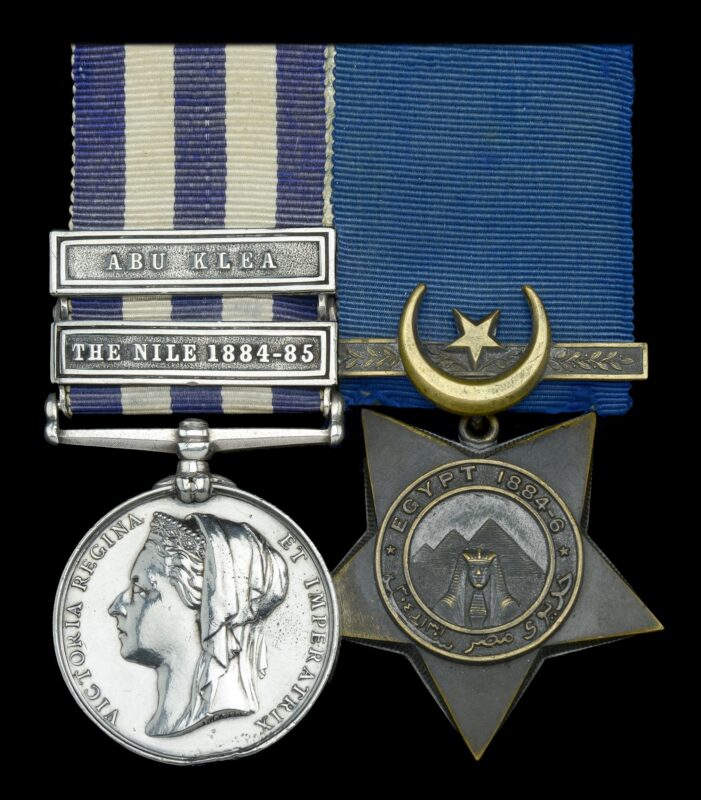 Medals for the failed attempt to relieve Khartoum.

The British campaign medals awarded to Wolseley’s force are a popular area of collecting, especially those for the battle of Abu Klea, but as a long-serving professional soldier, Gordon was very aware of the value of medals and decorations as rewards and a means of raising morale.

One of the medallic survivors of the siege is the Khartoum Siege Medal or Star, a poignant reminder of an historic and ultimately tragic event. Gordon decided early in the siege that awarding medals to the hard-pressed garrison and also to some of the unfortunate citizens who were trapped in the city, might raise morale and encourage further effort. As the siege tightened and circumstances in the city worsened, with acute food shortages and outbreaks of disease, such rewards took on an increasingly valuable role. 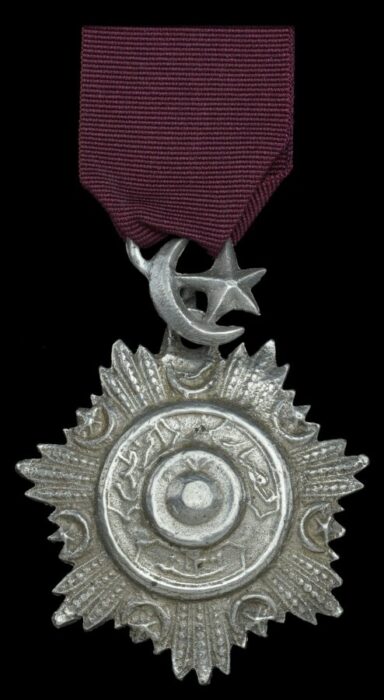 The basic pewter “Siege Medal”. They are not all so clearly defined.

After the siege, a surviving native officer wrote that, the design of the decoration was drawn by General Gordon himself in Khartoum. He then caused several goldsmiths to cast a model from the drawing, and then he chose the best one. He had a whole number of decorations struck under his supervision. The chosen producer was one of the city’s leading goldsmiths, Bishara Abdul Malik (or Molak) As early as February 1884, Gordon wrote to the British consul in Egypt, Sir Evelyn Baring: We are making decorations for the defence of Khartoum – a crescent and a star, with words from the Koran and date, so we can count on victory – officers silver, men copper. You will not be asked to pay for them. This proposed design was never adopted. However, on July 30th he sent Baring another letter, in which he wrote, We have made a decoration with three degrees, silver-gilt, silver and pewter, with inscription, ‘Siege of Khartoum’, and with a grenade in centre. School children and women have also received one. He repeated these details in a letter to General Wolseley in November 14th. The central grenade device (which looks like a simple boss in most examples) may have been inspired by Gordon’s Royal Engineer insignia. The earliest known contemporary illustration of the decoration occurred in Gordon and the Mahdi—an illustrated narrative of the Sudan War, a cheap booklet published to cash in on the mood of the moment in 1885. 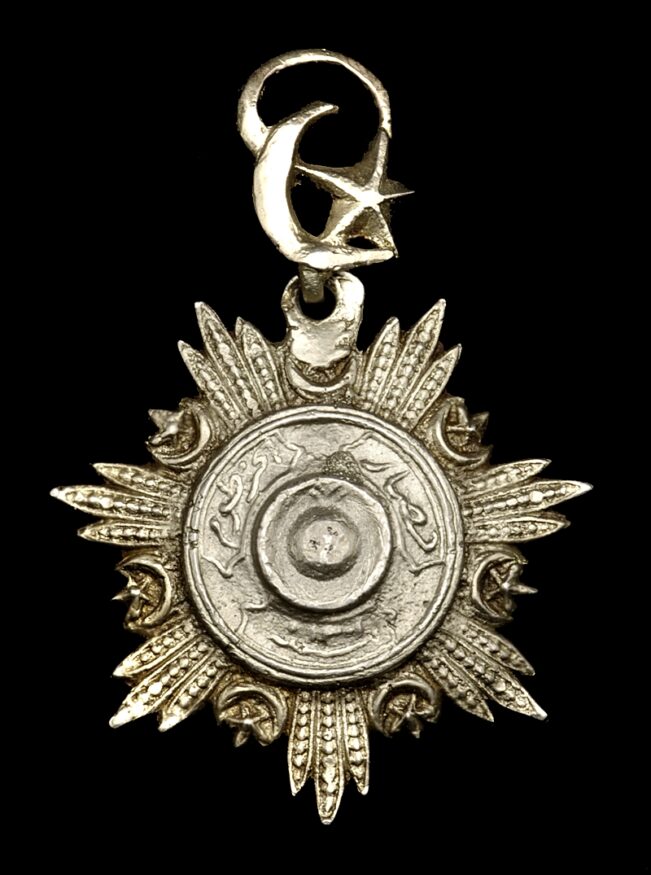 The award – interestingly designated as a ‘decoration’ by Gordon – was clearly based on the badge of the Ottoman Order of the Medjidieh. The awards were sand-cast in the various metals, most commonly in pewter, and all are inevitably fairly crude in form. The central band on the obverse of the original was altered to include the wording (in Arabic) The Siege of Khartoum with Islamic year 1301 AH (= 1883/84). The reverse was completely plain (they are not found named) and is generally concave. The medal was 60mm in diameter but because of the sand-casting process, sizes vary slightly due to metal shrinkage and the detail on the medal is sometimes not very sharp. The loose crescent-and-star suspension was also taken from the Medjidieh but is rather fragile and often missing or replaced with a more robust type.

Apparently no ribbon was specified for the medal, but some are found with what looks like an original (i.e. contemporary) length of plain purple ribbon. Some are seen with plain dark red ribbons or with the Medjidieh ribbon or in fact any colour as available to the recipient! 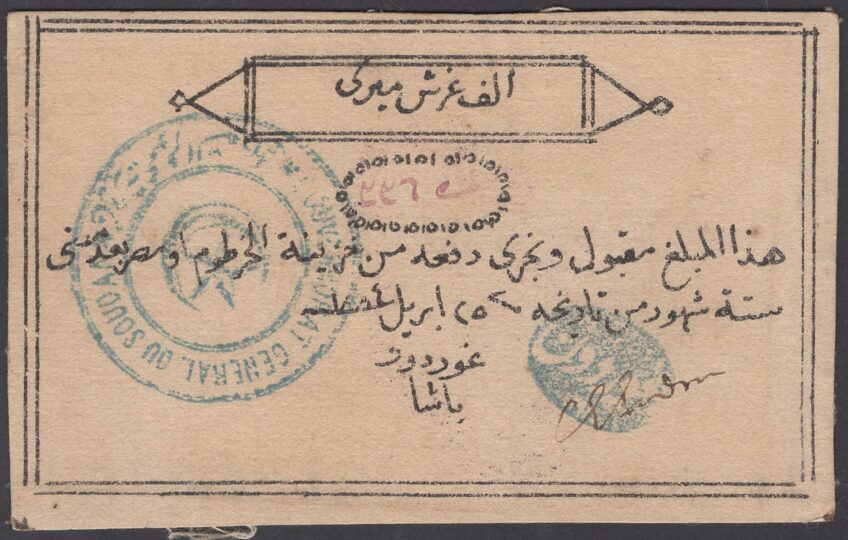 Another survivor of the siege – printed emergency banknotes, many actually signed by Gordon.

The terms of the award were rather novel, reflecting the unusual circumstances of the day. The silver-gilt types were apparently awarded to higher-ranking officers from Bimbashi (senior Major/ Lt. Col) upwards and were also given in this form to leading merchants and ‘notables’ who had rendered material aid in the supply of the city, though these initially had to pay £10 for their medal, ordered via the goldsmith and the money distributed among the poor. Eventually, they were freely given as rewards to deserving individuals but even so only about 40 silver-gilt types are thought to have been awarded.

Medals in silver were given as actual rewards for gallantry or meritorious service to officers from the rank of Mulazim (equivalent to Lieutenant) to Sagh (Major) and were at least some recognition of the outstanding and often gallant services rendered by the Egyptian officers on whom the defence really depended. All other awards were cast in pewter and were given to a wide range of recipients, from Other Ranks and NCOs as military rewards, down to males and female servants and even students. The general point was that civilian recipients had to have contributed to the defence in some way. 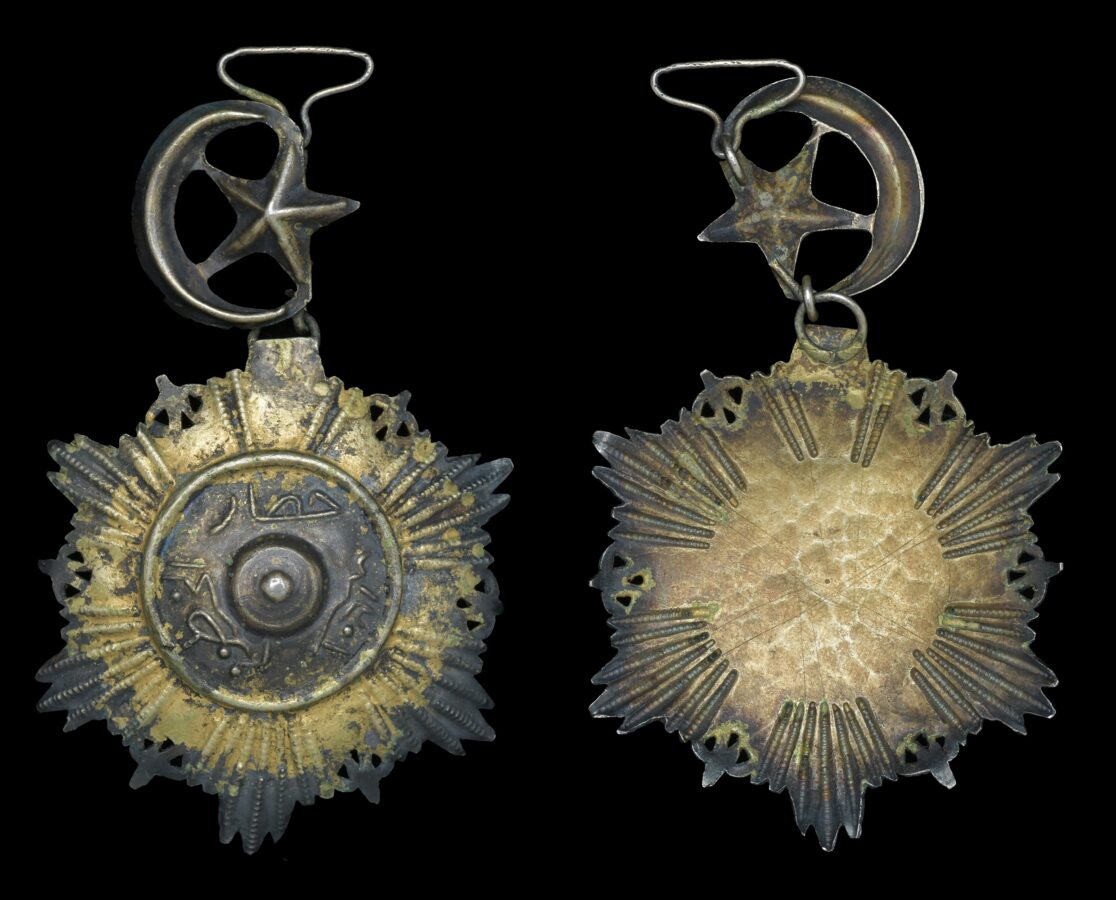 Obverse and reverse of one type.

As late as December 1884 Gordon sent examples of the medal to the Khedive of Egypt, writing to him that during the siege it has been my lot to witness many cases in which soldiers, civil employees and leading men of the country have displayed courage and self-sacrifice in valiantly undergoing difficulties and privations. To reward their commendable conduct and fidelity I have caused decorations to be made for distribution amongst them. I had previously sent a specimen of this decoration to your Highness … but as I fear it may never have reached you, I send you today another for your acceptance.

The medals turn up on the market quite frequently – or at least the pewter examples do – though given their generally poor quality they are probably not difficult to fake, so it is a question of ‘buyer beware’ ! They fetch around £800-900, with cleaner, better -detailed casts fetching rather more. Those in silver-gilt are harder to find and the nicer the condition the greater the value, while silver examples seem to be much rarer than the rest and are seldom seen.

Unsurprisingly, the medals are rarely found in pairs or groups but a few are known to Egyptian or Sudanese soldiers who escaped the massacre in the city in January 1885 and later served in the regiments which were formed by the British as part of the reconstructed Egyptian army. Such groups – which can be difficult to verify – might contain British and Khedival medals for Egypt and the Sudan 1885-91 or for the Sudan 1896-98 and are rare and expensive!

[Below – part of the huge “Gordon industry” – a large and varied range of commemoratives was produced to catch the mood of the moment in 1885 and reflect the sense of shock felt by the British public at the failure to save Khartoum and rescue Gordon. Much of the outrage was directed against the anti-imperialist Liberal Prime Minister, William Gladstone, who was deemed to have sent the relief force out too late – deliberately according to some critiscs!!] 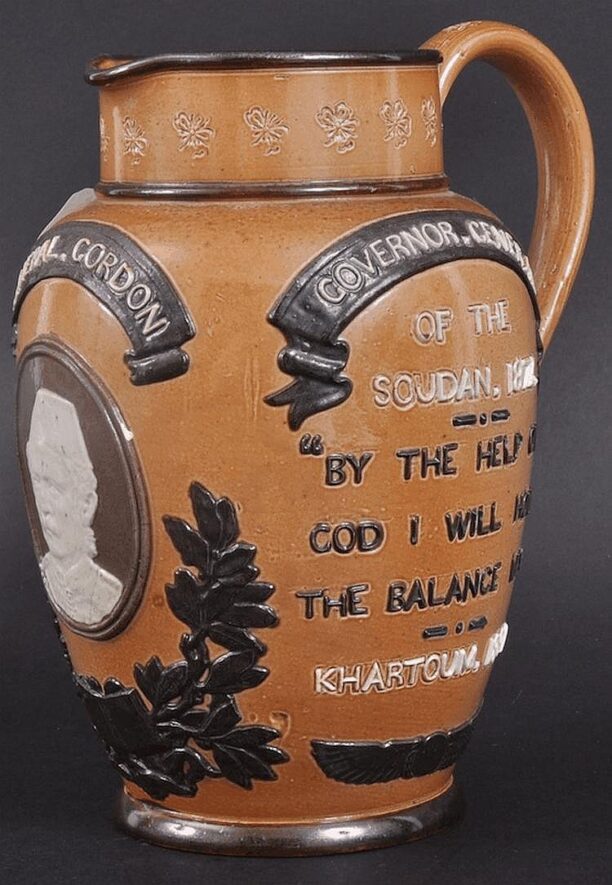