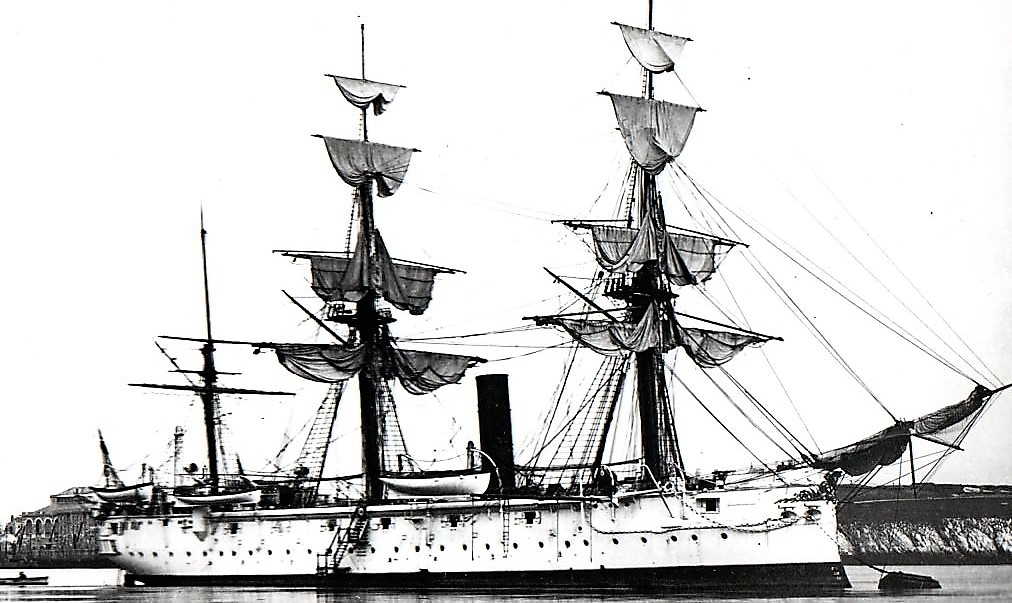 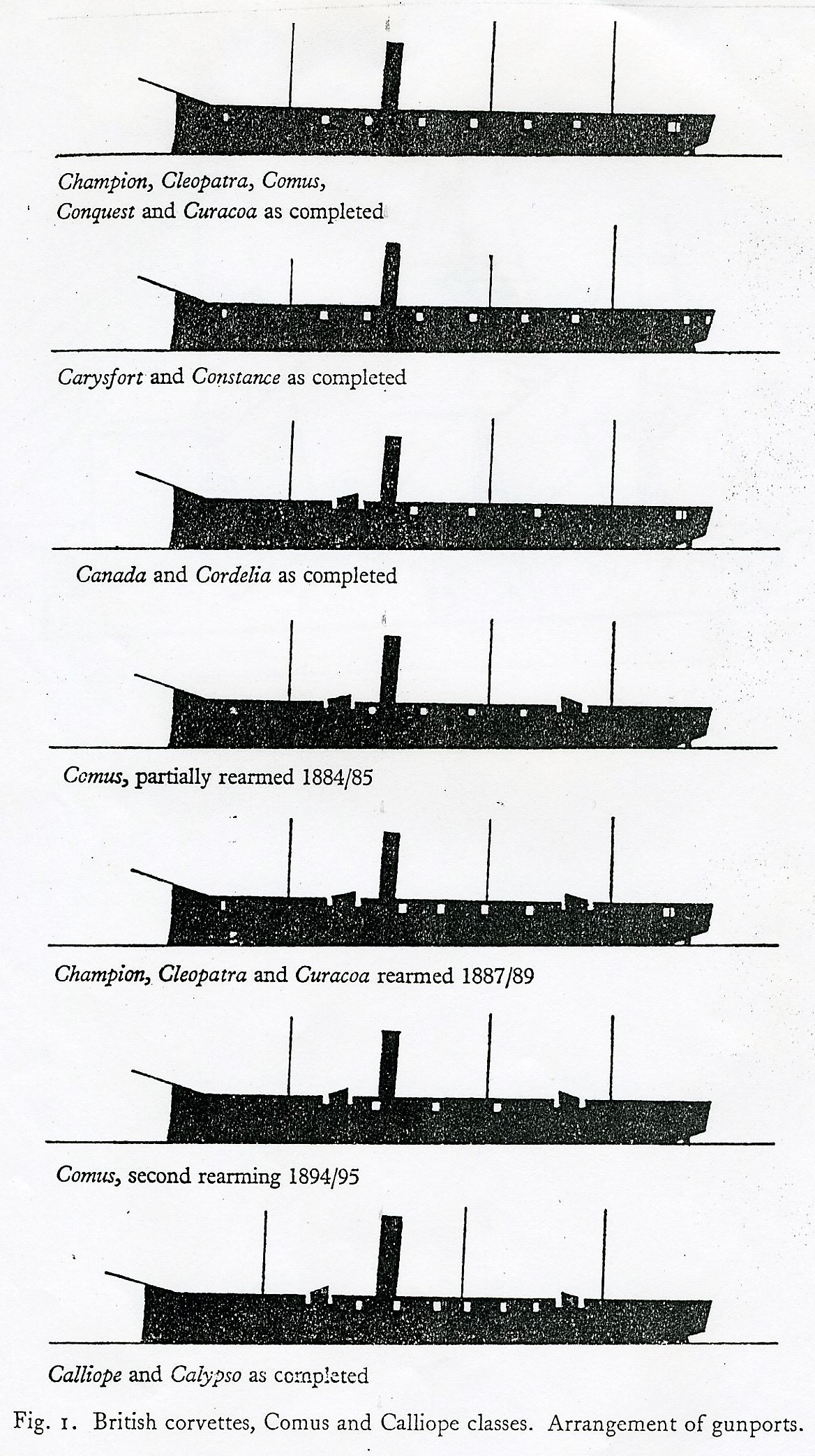 The construction of these ships was a direct response to the perceived threat from a new class of French light frigates which was regarded by the Admiralty as posing a real challenge, potentially as fast, long-range “commerce raiders”. Such a threat could not be ignored by a naval power whose trade and wealth depended upon very long sea routes crossing the entire globe.

The ships of the new Comus class, designated as “14 gun corvettes”, were in many respects remarkably advanced. They had “protected” (armoured) decking over their machinery, had electric lighting and searchlights, carried torpedo tubes, had showers and bathrooms for the crew and, most unusually, had a library for the men. Their top speed was approx. 13 knots and their range, using both wind and steam power, over 5,000 miles. Their armament was also impressive for their size, typically being two 7” guns, twelve 64-pounders (six along each side), three or four Nordenfeldt machine guns, torpedo tubes and electric searchlights. It should be noted, however, that their armament and other specifications were altered during the course of their careers as they were modernised and adapted. They were not quite as fast as the French ships they were meant to counteract, but they packed more of a punch.

In their own way, they all had interesting if relatively peaceful careers of approx -imately twenty years, patrolling the seas of the Empire. Calliope famously survived a terrible hurricane at Apia in Samoa in 1889, her Captain sailing her out of the harbour under steam to the comparative safety of open water, in the teeth of the gale, and to the cheers of foreign warships (which were soon to de destroyed) riding at anchor.

Carysfort (centre) with the “Special Service” squadron in 1881.

But only Carysfort actually saw war service. As part of the Malta-based Mediterranean Fleet for her entire active career, she took part in the Egypt operations of 1882 and then, having re-commissioned in Malta, in the Sudan campaigns around Suakin in 1884 and again in 1885. In fact, she probably had a more extensive involvement in those campaigns than any other single British warship, with members of her crew earning the Egypt medal, dated and undated, with clasps Tel-el-Kebir, Suakin 1884, El Teb, Tamaai, El Teb-Tamaai, Suakin 1885 and Tofrek. 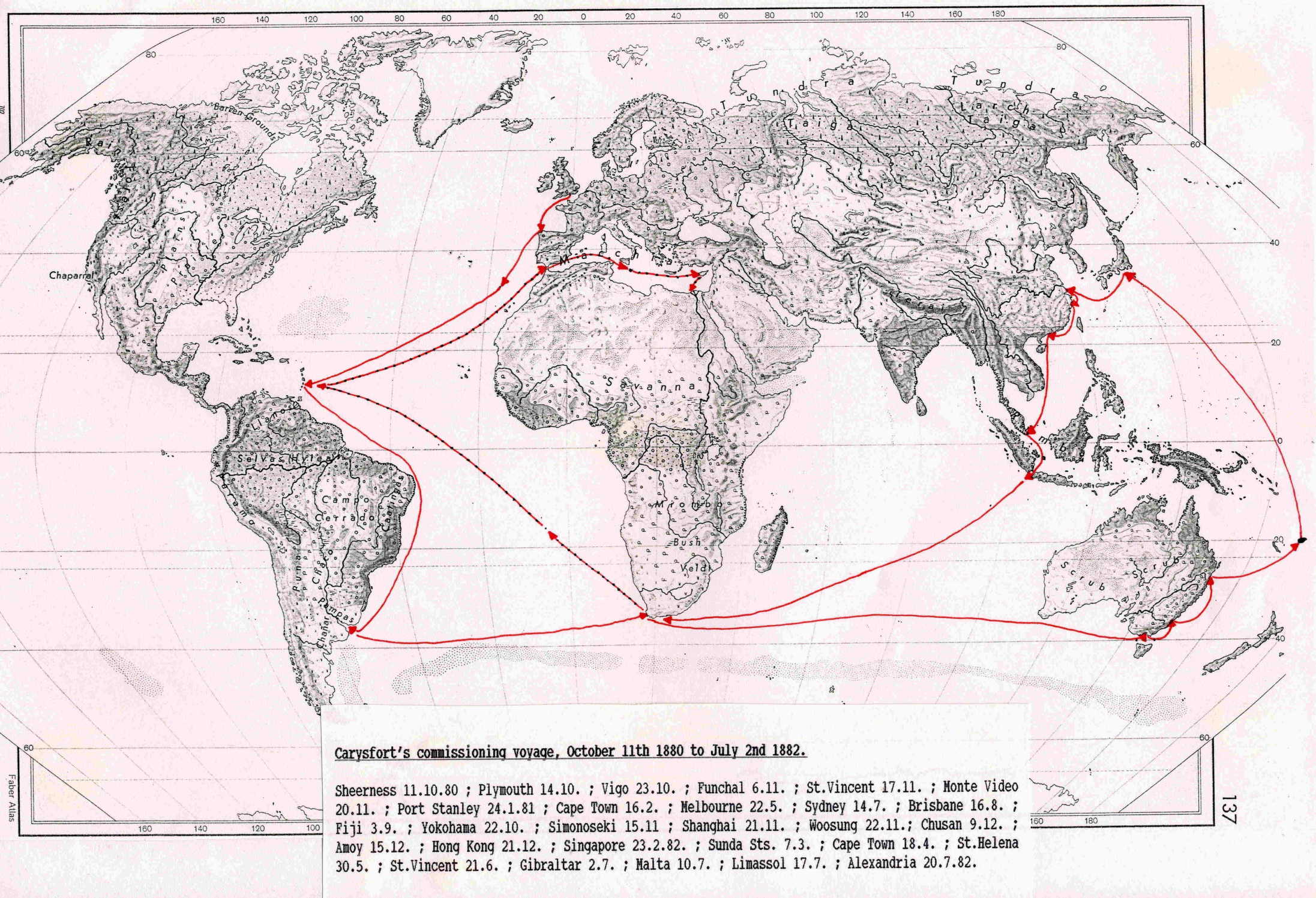 Carysfort, under Captain Harry Stephenson, had a magnificent “maiden voyage” with the Detached Squadron, which, among other things, was to give naval training to the young Prince George (the future King George V). Leaving Sheerness in Oct. 1880, she sailed via Vigo in Spain to Madeira, then via St. Vincent to Monte Video, then to the Falklands, then across the southern Atlantic to Cape Town and on to Australia, visiting Melbourne, Sydney and Brisbane. Leaving Australia in August 1881, she headed for Fiji and then on to Japan, visiting Yokohama and Simonoseki. She then toured the Chinese coast, calling at various ports, reaching Hong Kong just before Xmas 1881. Her homeward voyage took her via Singapore, the Sunda Straits and back to Cape Town before heading up the Atlantic via St. Helena, St. Vincent and Gibraltar. When you consider what other “working men” were doing at that time – the fathers or brothers of Carysfort’s crew perhaps employed in the fishing fleet or in factories, in mines, in building, on railway work and other hard manual trades – a two-year voyage around the world on a small, brand-new warship seems a pleasant alternative! 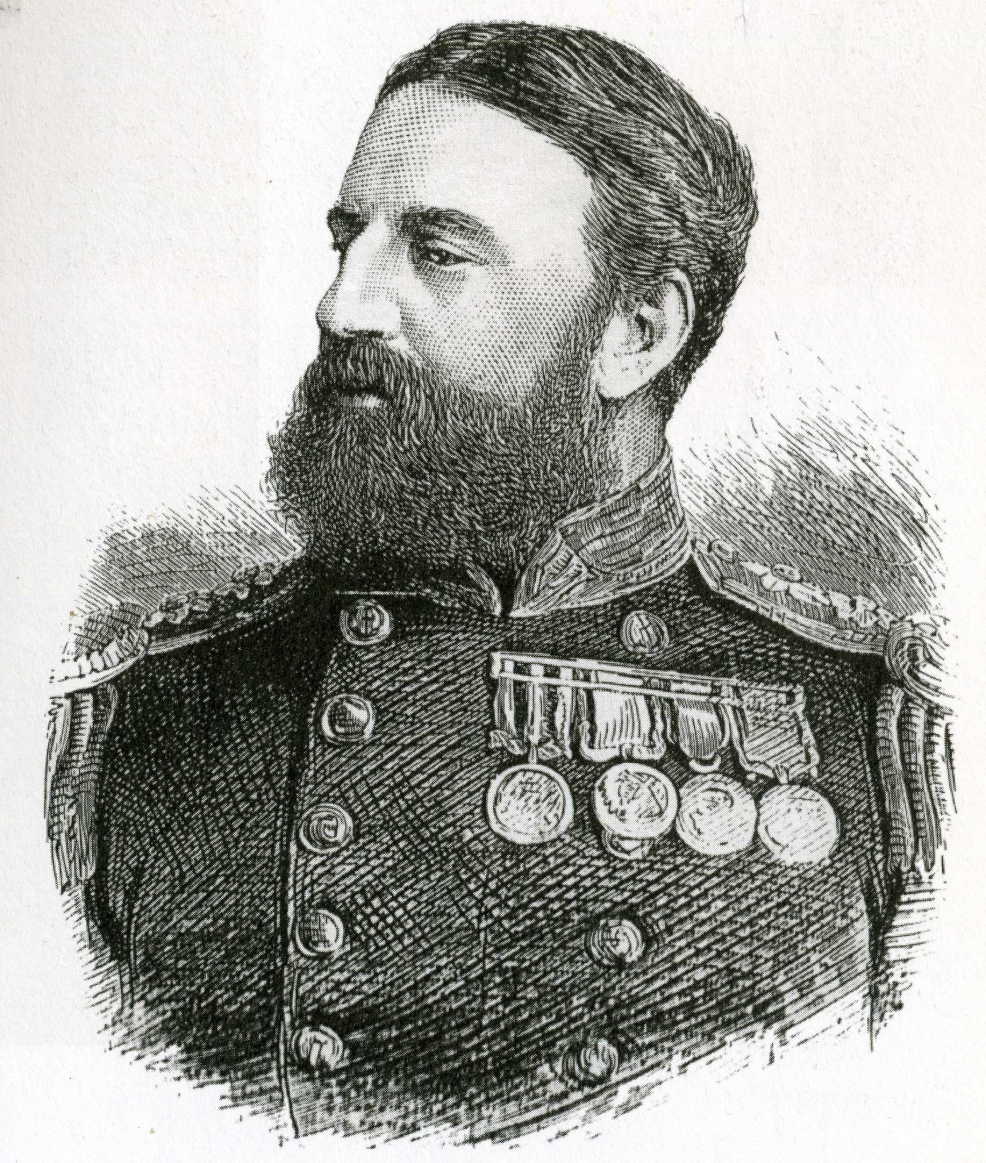 It was whilst she was in Gibraltar in July 1882 – en route for Portsmouth after nearly two years’ absence – that Carysfort was diverted into the Mediterranean to join the British fleet at Malta. With the escalation of the Egyptian crisis, Britain was assembling a powerful warship force to support military action in Egypt. On July 17th 1882, Carysfort was at Limassol in Cyprus and on 20th finally joined the British squadron in Alexandria – the squadron which had bombarded the port defences on July 11th. Her crew thus missed entitlement to the clasp Alexandria July 11th by a few days.

Carysfort sailed immediately for Port Said carrying ammunition for other British ships – such as Penelope and Coquette – and was off Ismailia by July 27th. Here she prepared her “landing parties” for shore service with the Naval Brigades. Such service by the actual crew of a warship and/or her Royal Marine complement was of course one of the principal functions of a Royal Navy vessel “on active service”. During the early days of August, Carysfort’s landing party trained ashore with field guns, Gatlings and Nordenfeldts. On August 20th, her sailors with a Royal Marine contingent, a field gun and a Gatling machine-gun, joined those of Northumberland “and took possession of Ismailia”, the ship’s guns covering the landings with fire from her 7” guns. Later on the same day, she trained her 64-pounders on Nefiche railway station, the guns being directed from the mastheads by telescope. Firing continued all day. Next morning, Carysfort landed two companies of sailors who occupied Nefiche. 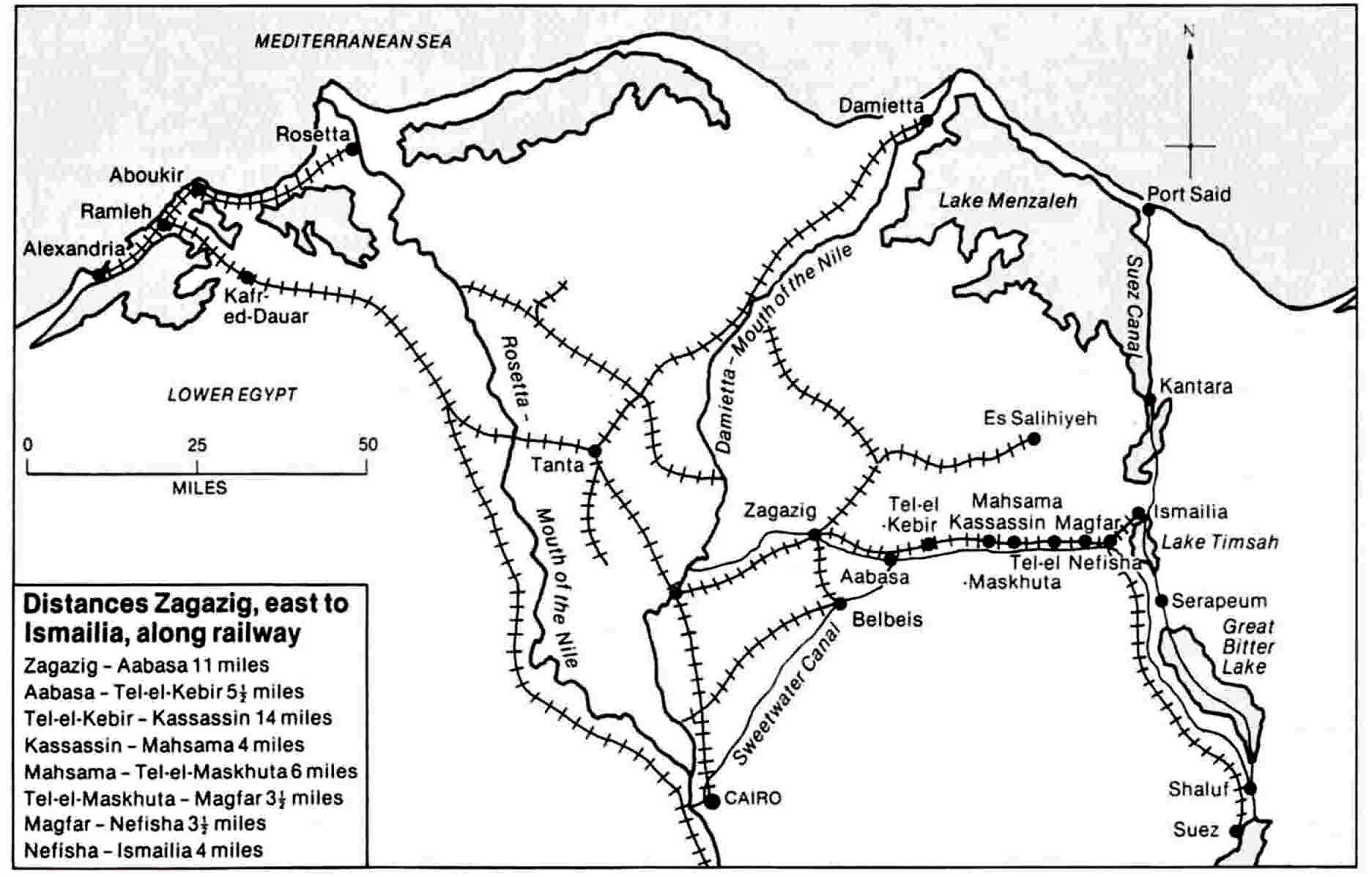 On August 24th, a party under Lieut. Montgomerie, RN, and Midshipman Sir Charles Cust, served in Carysfort’s pinnace, armed for the occasion with a 9-pounder gun, in the sweet-water canal. Another 30 men served ashore under Lieut. E. S. Jones in and around Ismailia on transport duties and on Sept. 10th, Lieut. G. C. Langley, the ship’s Gunnery Officer, 37 men and a Gatling went ashore to serve with the Naval Brigade attached to General Wolseley’s main army. This contingent served on the far left of the British army as it advanced along the sweet-water canal and was present in the crowning defeat of the Egyptian army on Sept. 13th at Tel-el-Kebir; it returned to the ship on Sept. 16th. Another contingent from the ship – 20 sailors and 20 Marines under Lieut. Royds – was landed on the 18th as part of the force deployed to protect the canal. 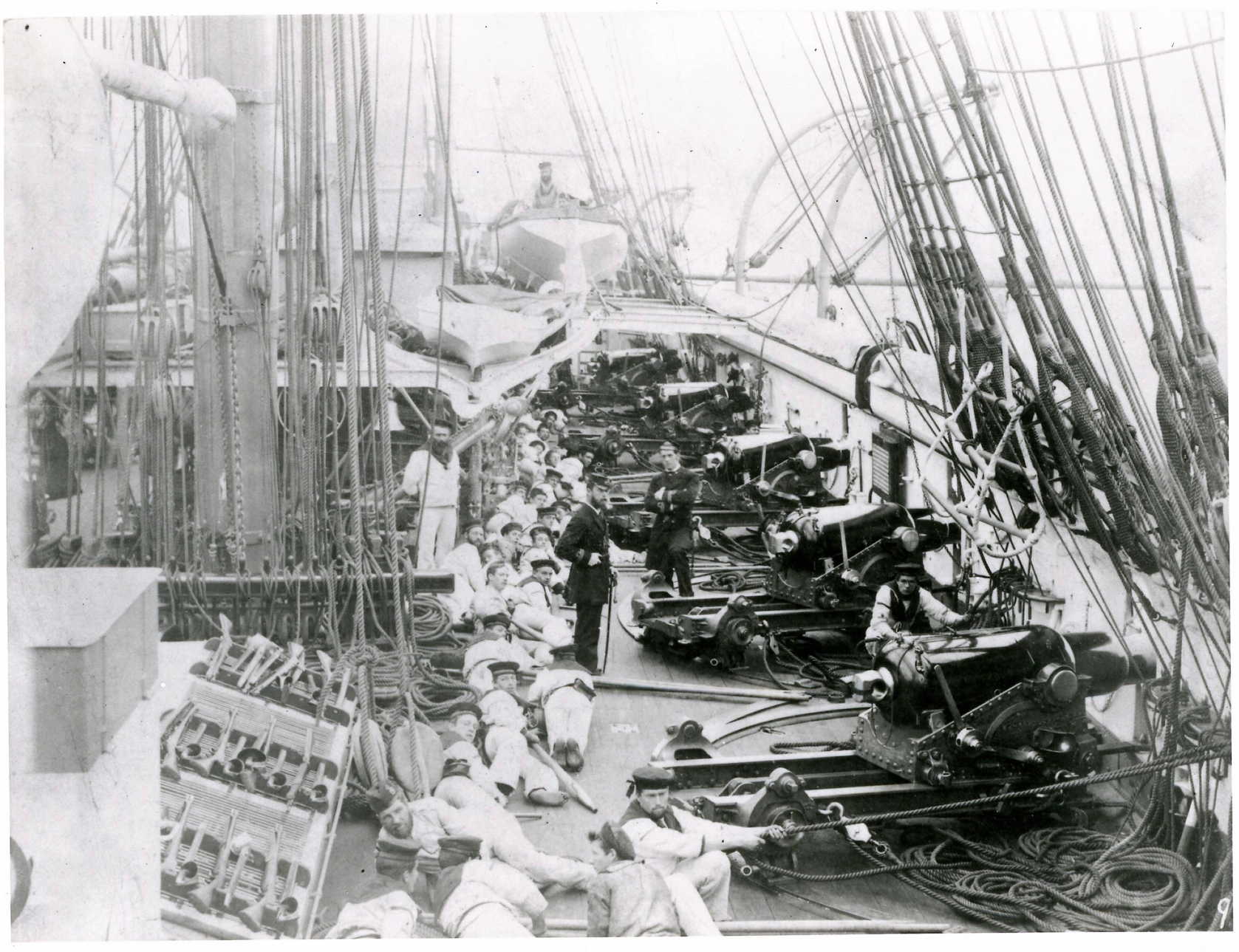 Carysfort finally sailed from Ismailia on September 25th for Suez, picking up Lieut. Royds and his command on October 10th. After two months’ cruising in the Bay of Suez or at anchor in the port, she sailed for Malta in January 1883, her participation in Egyptian operations at an end.

In these days of medal collecting, when everything is selling for high prices and even the “commonest” Victorian medals seem to have vanished from the dealers’ trays, it is strange to think that once (and not so long ago) “no bar” Egypt medals to the Royal Navy were not very popular. One used to see them round the fairs to all sorts of ships and with little “take up” by collectors. I suppose they may have been considered “dull” in comparison with those to army units engaged at Kassassin or Tel-el-Kebir but in fact there are some interesting stories attached to many of these ships, unglamorous as their roll may seem. 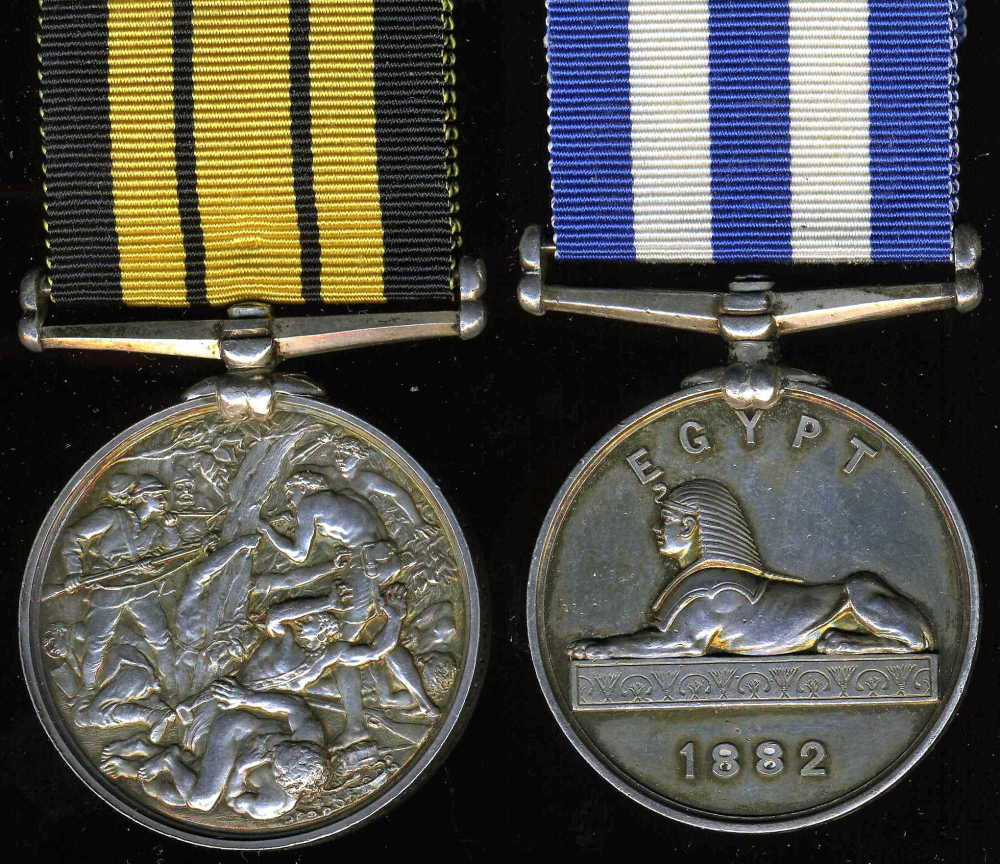 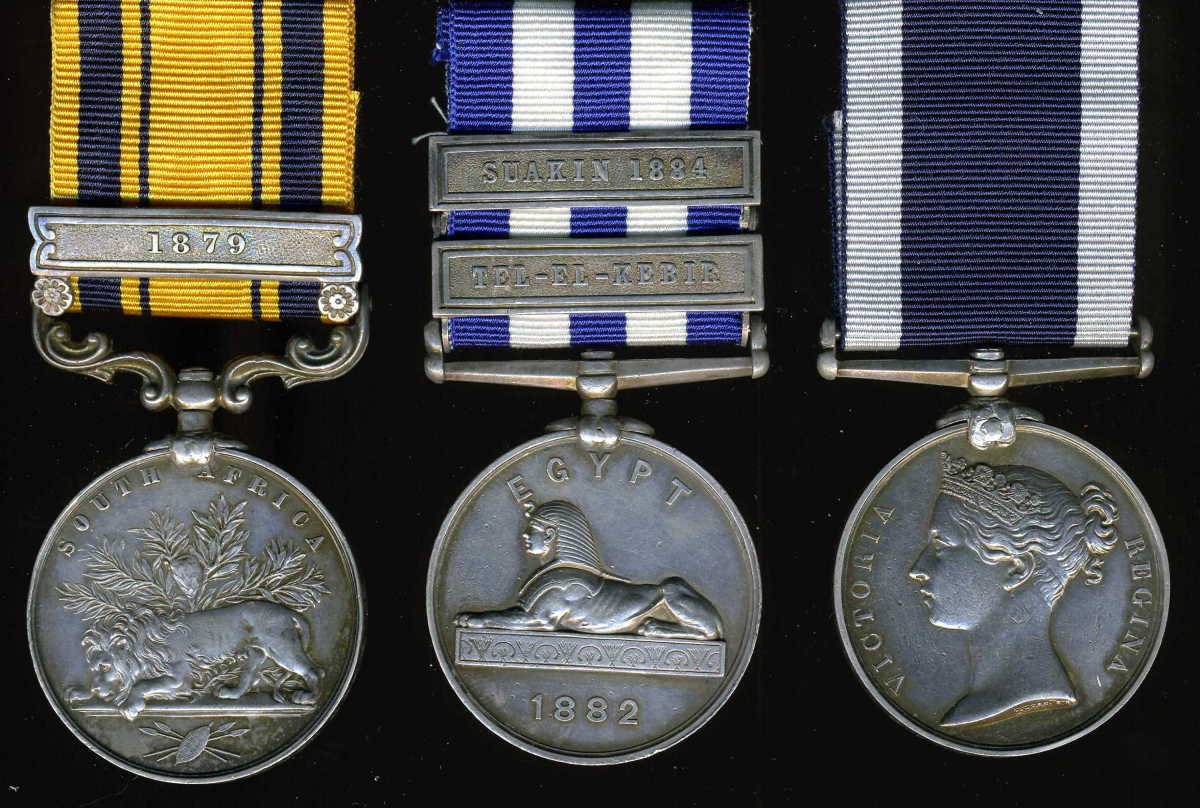 With Carysfort – as with the other ships engaged around Egypt – we see the typical operation of the Victorian navy during the era of “Pax Britannica”. No significant naval battles, but the necessary task of patrolling, ferrying and landing supplies and firing in support of land operations. Most importantly perhaps, we see them sending ashore trained sailors and marines to join the Naval Brigades – “the long arm of Empire” – either to act independently as and where required or to join larger land forces for major operations.

A unique award – medal and all four clasps earned on Carysfort by William Warren. 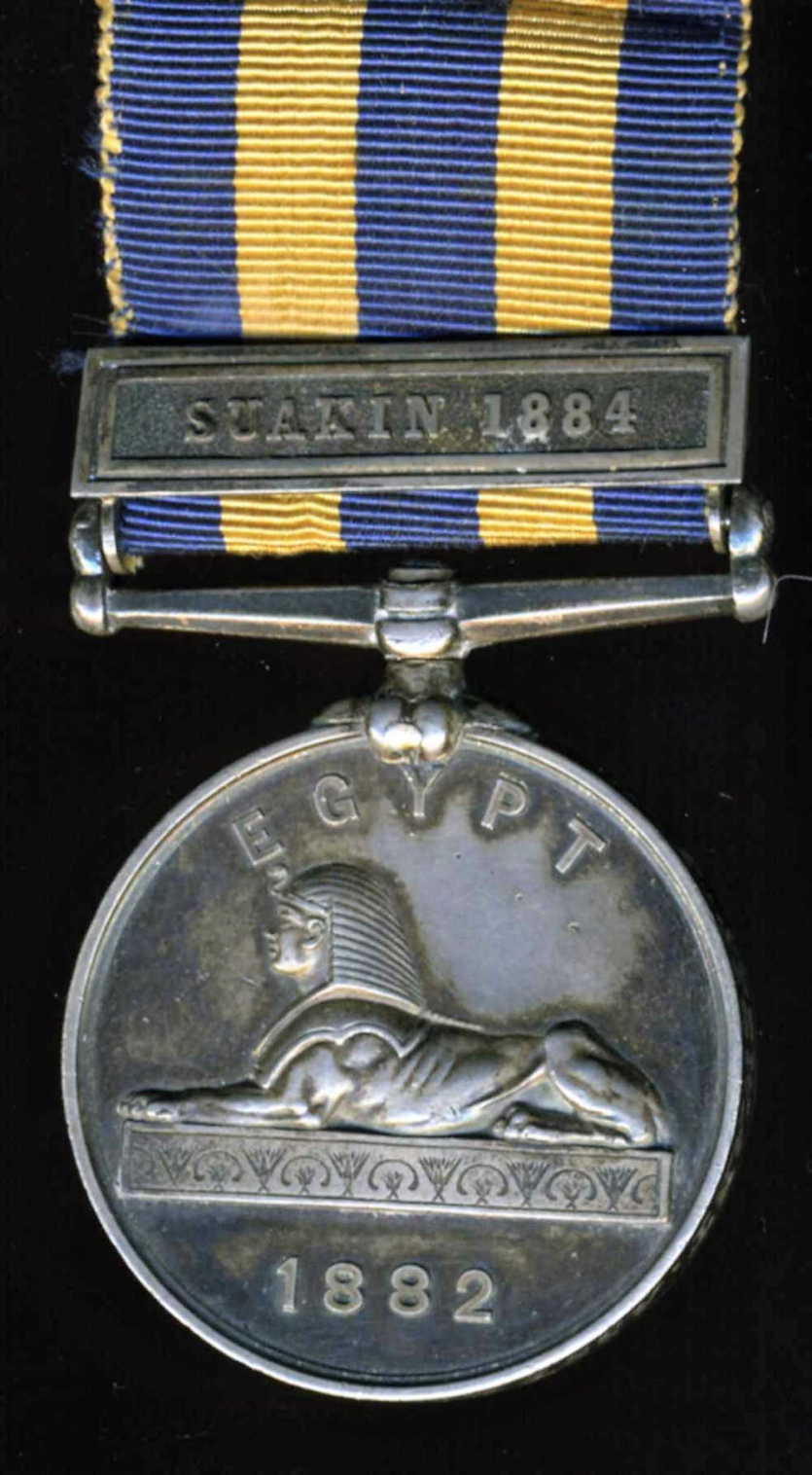 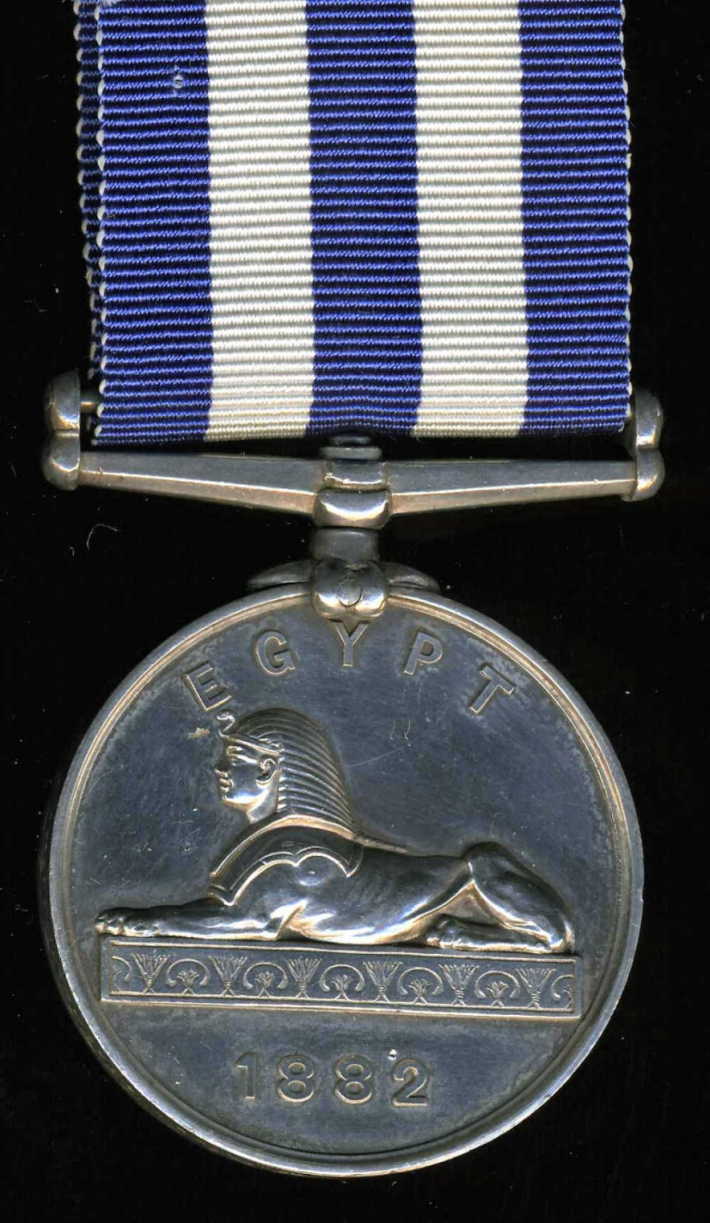 It is interesting to note that none of the ship’s complement of Marines seems to have been present at Tel-el-Kebir.

Many of these 42 recipients later went on to earn other clasps either on Carysfort or other ships.