HMS Carysfort :
a Victorian corvette in the Egypt and Sudan campaigns 1882-85. 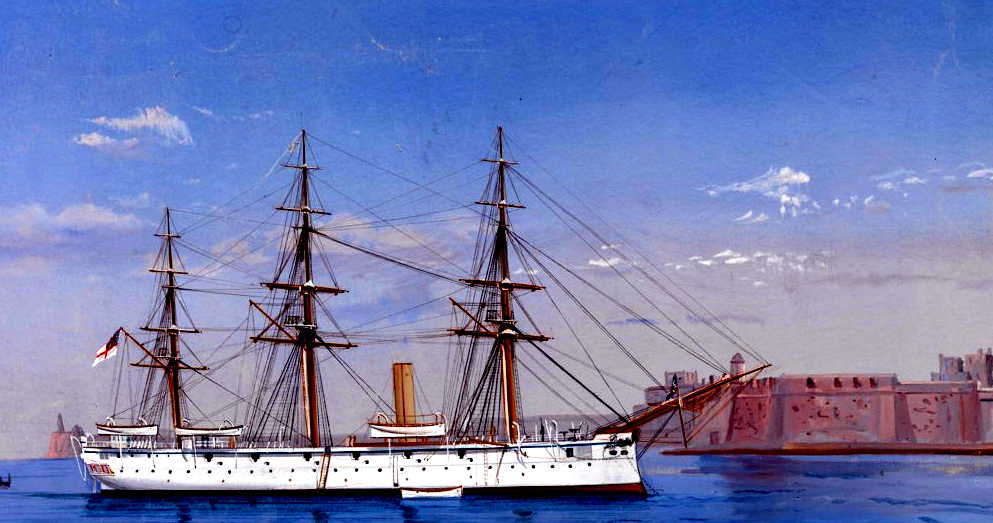 Carysfort in Grand Harbour, Valletta, in the 1880s.

When Carysfort left Egyptian waters in Sept. 1882 at the end of the Egyptian campaign, she sailed for Malta. She was to spend her entire “active” career as part of the Mediterranean Fleet, based at Valletta, and only returned to UK waters at the end of her service life.

Whilst part of the Mediterranean Fleet for nearly ten years, Carysfort spent her time cruising the eastern Mediterranean, the Adriatic, the Turkish coast, the Aegean and (occasionally) the coasts of western Italy and southern France. I commented in Part I of this article, when speaking about the ship’s maiden voyage around the world, that it seemed to me to offer a more pleasant life than that available to many “working men” back home on dry land. The same could be said about Carysfort’s peaceful years cruising the Mediterranean. In the era of “Pax Britannica”, there was little in the way of action and her usual routine consisted of visits to major ports in the Eastern Mediterranean – Piraeus, Smyrna, Rhodes, Limassol, Suda Bay, Trieste and many others – in a role which was simply “showing the flag”. The Admiral in command of the Mediterranean Fleet, the Duke of Edinburgh, had all his ships painted white – hardly a practical colour for fighting vessels – purely and simply to make sure that they were “seen”. These undemanding cruises around the ports and islands of the Mediterranean were meant to demonstrate a constant British presence in the area. 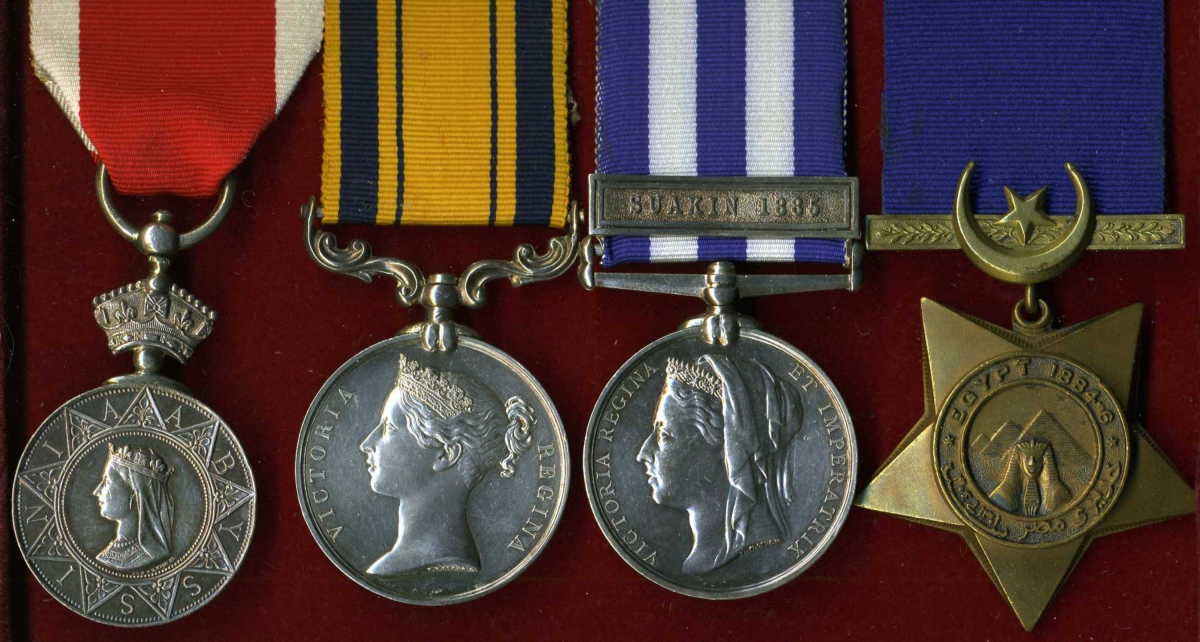 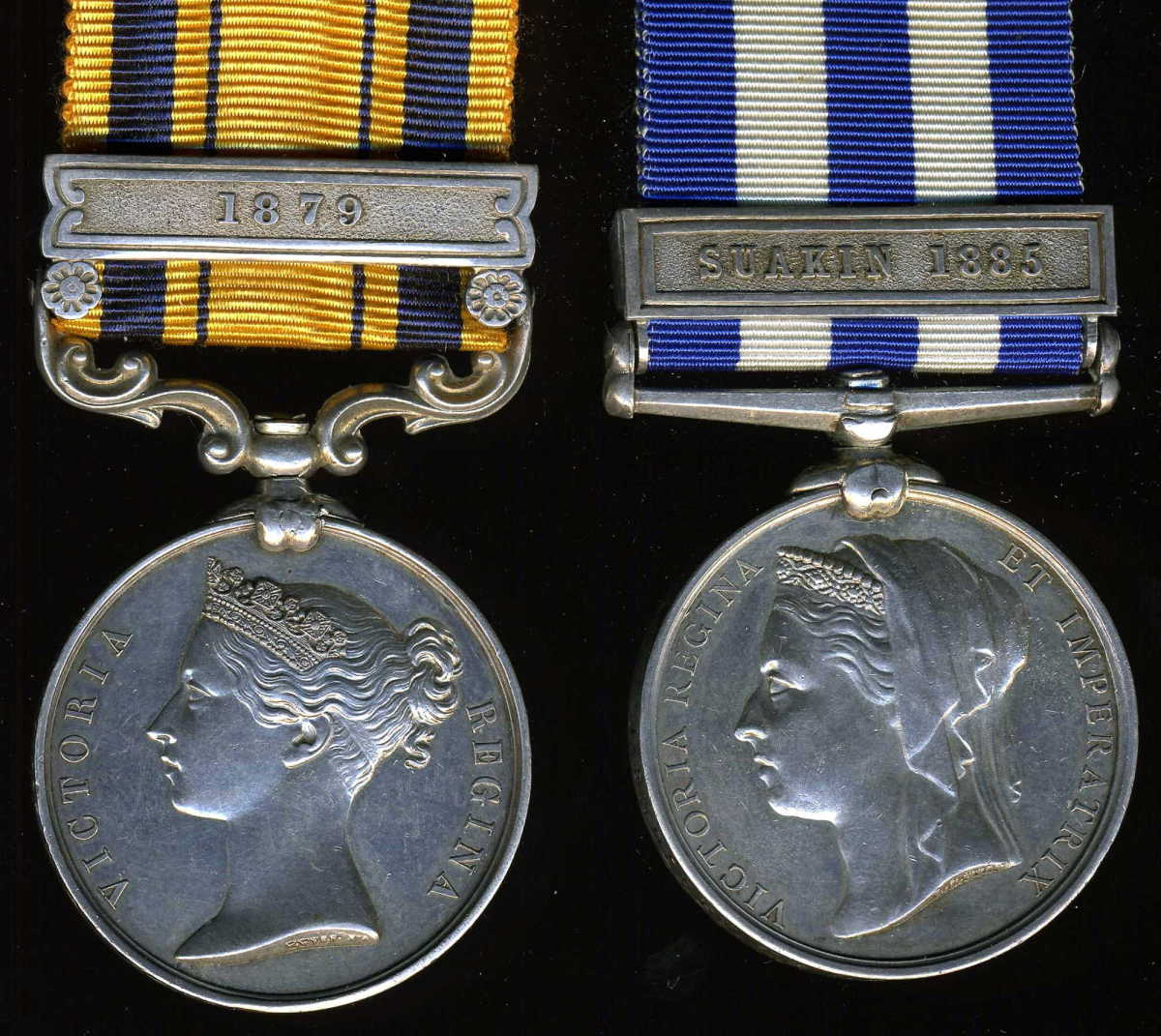 However, like other ships of the Mediterranean Fleet, Carysfort’s pleasant cruises were sometimes interrupted by the call of active service. In 1884 and again in 1885, she was diverted to Suakin on the Red Sea coast of the Sudan to play her part in operations against the tribes of Osman Digna. These operations in what has been called “the hottest place on earth” were part of the Gladstone government’s reluctant response to the Mahdist uprising in the Sudan. There was of course no British interest in the Sudan itself at that date, but a serious military uprising there was deemed a direct threat to Egypt (technically overlord of the Sudan) and therefore potentially to Britain’s control of the Suez Canal. Hence the fighting in the eastern Sudan in 1884, the dispatch of General Gordon to Khartoum to bring out the Egyptian garrisons along the Nile later that year, the Gordon “Relief Expedition” and the continuing operations around Suakin on the Red Sea in 1885. 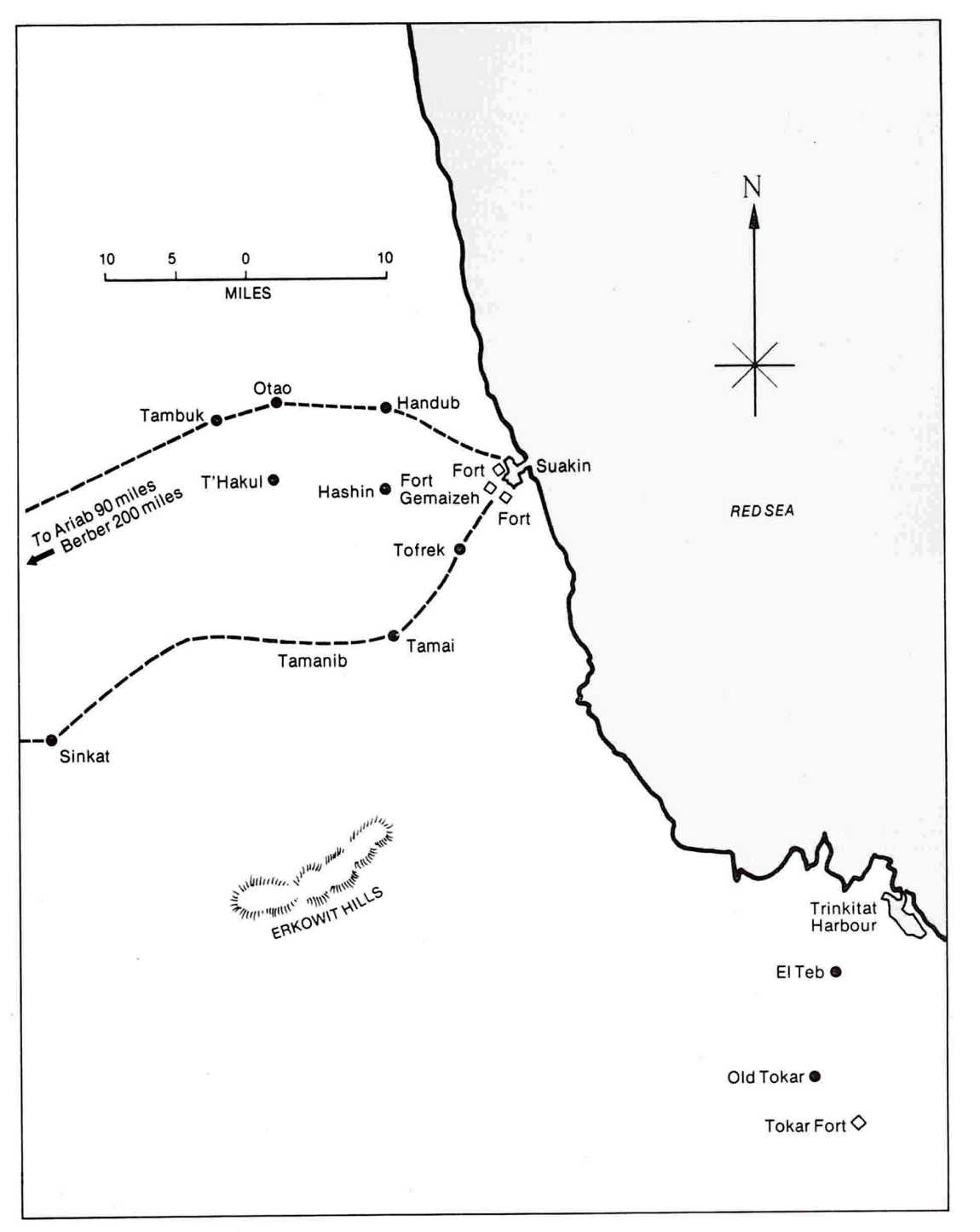 The ship joined the British squadron in the fine natural harbour of Suakin on 10th February 1884. Straight away, she was pitched into the military operations then underway, landing parties of Marines (113 on Feb. 14th) and sailors for shore work over many days. They also helped to unload and stack stores and supplies. Carysfort itself was sometimes in action, firing shells over the port defences at enemy groups congregating too close to the perimeter and was also involved in operations off Trinkitat. During “the Relief of Tokar”, land operations to rescue the threatened Egyptian garrison at Tokar after February 29th, she landed Gatling machine-gun crews to serve with the Naval Brigade; it was these men who fought at the battle of El Teb on 29th February. Carysfort’s casualties were light – only one officer and two men wounded, but the popular officer,

Lt. Royds, subsequently died of his wounds. Several of Carysfort’s crew were “mentioned in dispatches” for carrying Royds out of the action and across the desert to the ship. Some of the crew later received the single action “El Teb” clasp but as some of the same men were also present at Tamaai on 13th March many received “El Teb – Tamaai” for both actions. No member of Carysfort’s crew received the single-action clasp “Tamaai”.

Life at Suakin was by no means pleasant or easy – the heat above all was exhausting and Carysfort was given a respite in mid March, when she sailed again for Malta and remained there or off the Egyptian coast until August 5th. Once back at Suakin she resumed the duties of landing parties to work around the port at a time when enemy attacks on the perimeter were unusually frequent; Carysfort and Albacore frequently shelled nearby enemy concentrations. Carysfort remained “on station” at Suakin until 11th November 1884, suffering increasingly numerous casualties from heat exhaustion and ailments like ophthalmia caused by sand and dust. She had 37 men on the sick list on August 23rd – one man in seven of her complement. 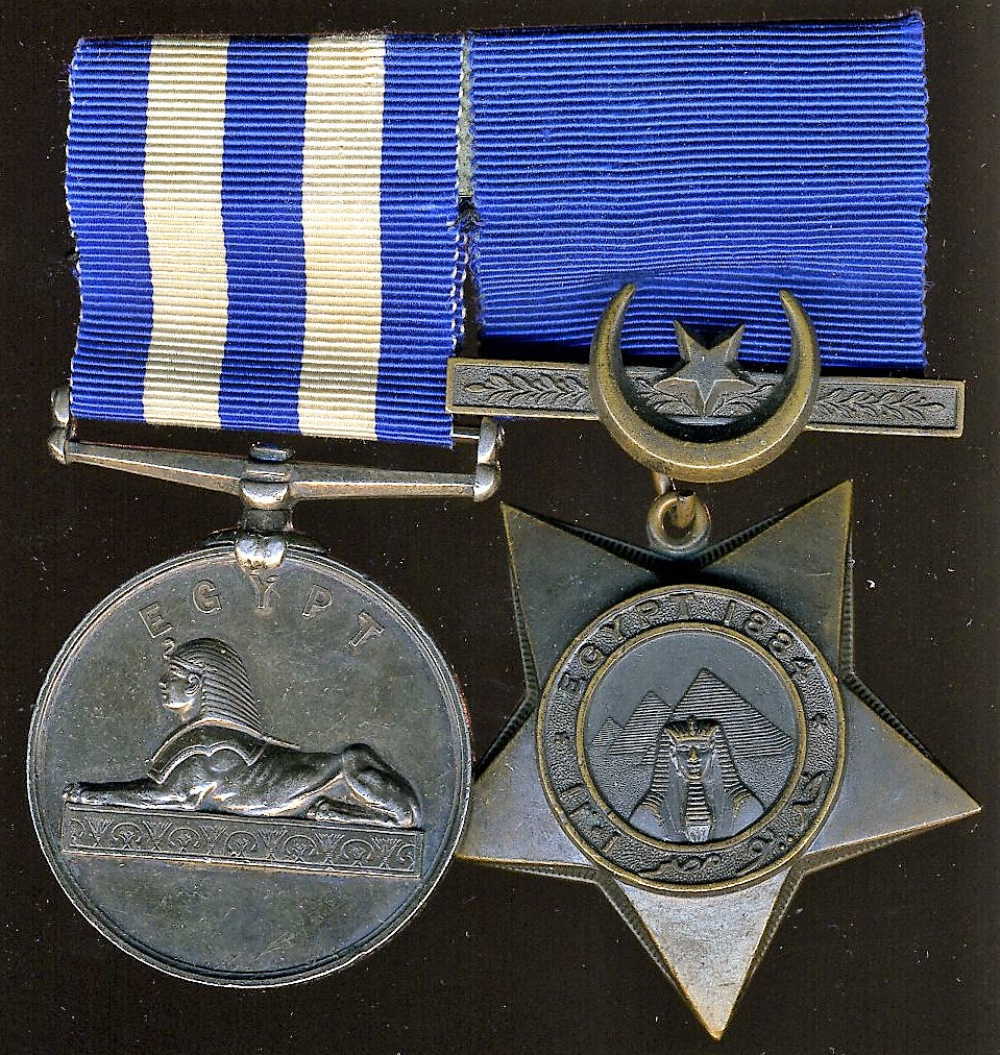 Following the debacle of the Gordon relief expedition in the winter of 1884, the British government decided to re-occupy Suakin in force, with the intention of building a light railway (by Lucas and Aird) from the port to Berber on the Nile, to facilitate the transport of troops to Khartoum. Carysfort duly found herself again called away from Malta and arrived at Suakin on March 1st 1885 as part of the new British force sent to the area, in company with Sphinx, Condor, Coquette, Cygnet, Dolphin and Starling. A small machine-gun party from the ship (12) served at the battle of Tofrek on March 22nd; they are reported to have been especially effective during the battle, cutting swathes through the ranks of the advancing tribesmen.

Interestingly, the ship’s log for 29th March 1885, records that Captain Stewart “mustered divisions and issued Soudan medals and clasps” – presumably for the 1884 actions – which is impressively fast work! But there was little extra excitement; for most of the time, the ship carried out a round of mundane duties like coaling, condensing water, training landing parties, mending and repairing, cleaning, cutlass drill and landing men for fatigue work ashore. It was work in an environment whose charms were few and quickly palled and most of the crew must have been delighted when, on 7th August, Carysfort left Suakin for good and headed back to Malta. The whole port was to be abandoned by April 1886, with the decision not to continue military action in the Sudan (or to complete the railway) and to leave it to its fate.

“Fort Carysfort” on the Suakin perimeter.

Carysfort carried essentially the same crew in 1884 as she had in 1882 and just about all of them earned the clasp Suakin 1884, so it is usual to see the 1882-dated Egypt medal with clasp Suakin 1884 to Carysfort. Of course there were just a few men of the 1882 crew did not, for various reasons, go on to serve at Suakin. Others, serving ashore as part of the Naval Brigades, earned the battle-clasps El Teb (42 to ship) or El-Teb-Tamaai (14 to ship) in addition to Suakin 1884. No member of the crew earned the single-action clasp Tamaai. 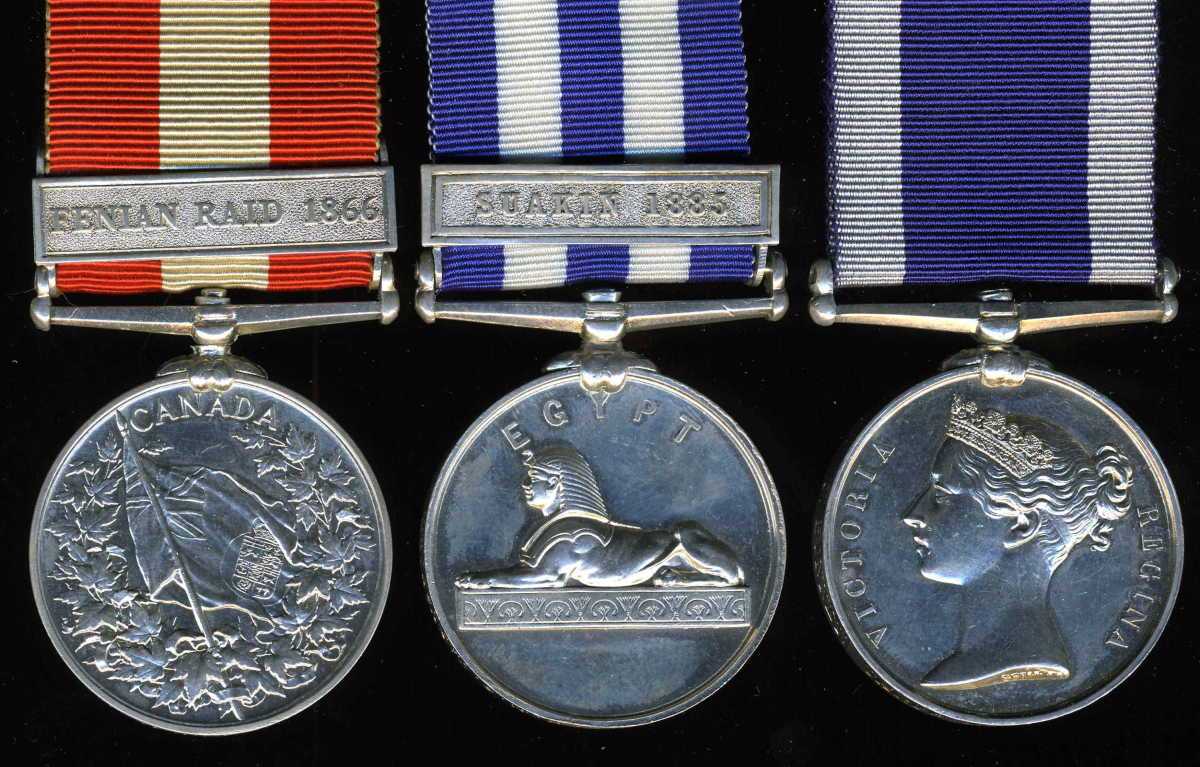 However, since the ship recommissioned at Malta after the 1884 operations, it was just about an entirely different crew that earned the clasp Suakin 1885, with just 12 also receiving Tofrek. It would be rare to find the clasp Suakin 1884 (and associated battle-clasps for that campaign) coupled with Suakin 1885 to a man who served entirely on Carysfort.

Most received the undated Egypt medal with Suakin 1885. Contrary to what has been published in earlier editions of British Battles and Medals, which claims only 32 clasps to the ship, almost the entire complement of Carysfort, her Royal Marines and local seedies, received the clasp Suakin 1885 – nearly 300 men.

Carysfort arrived in Malta and the home base of the Mediterranean Fleet via the Ionian Islands on 6th November 1885. Her last six years “on station” were a resumption of her cruises around the Aegean, the Adriatic and the coast of Turkey, with frequent visits to Rhodes, Crete and Cyprus and the smaller islands of the Aegean and Dodecanese. She took part in the naval blockade of Greece in 1886.

On 1st January 1891, Carysfort at last sailed for English waters, which she had left as long ago as October 1880 on the start of her round-the-world maiden voyage. She arrived in Devonport on 12th February and immediately joined the Reserve Fleet. Although only constructed between 1878-80, Carysfort and her sail-and-steam sister-ships of the Comus class were already deemed obsolete. She lingered in the Reserve Fleet until December 1899, when she was sold to be scrapped at Garston.

Off Nauplion [Nafplio], southern Greece, in 1886 during the blockade of Greece. HMS Albacore to right.

Today, there is little left of this particular HMS Carysfort – apart from the medals and clasps her crew earned for her considerable contribution to the campaigns in Egypt in 1882 and in the Eastern Sudan in 1884 and 1885. 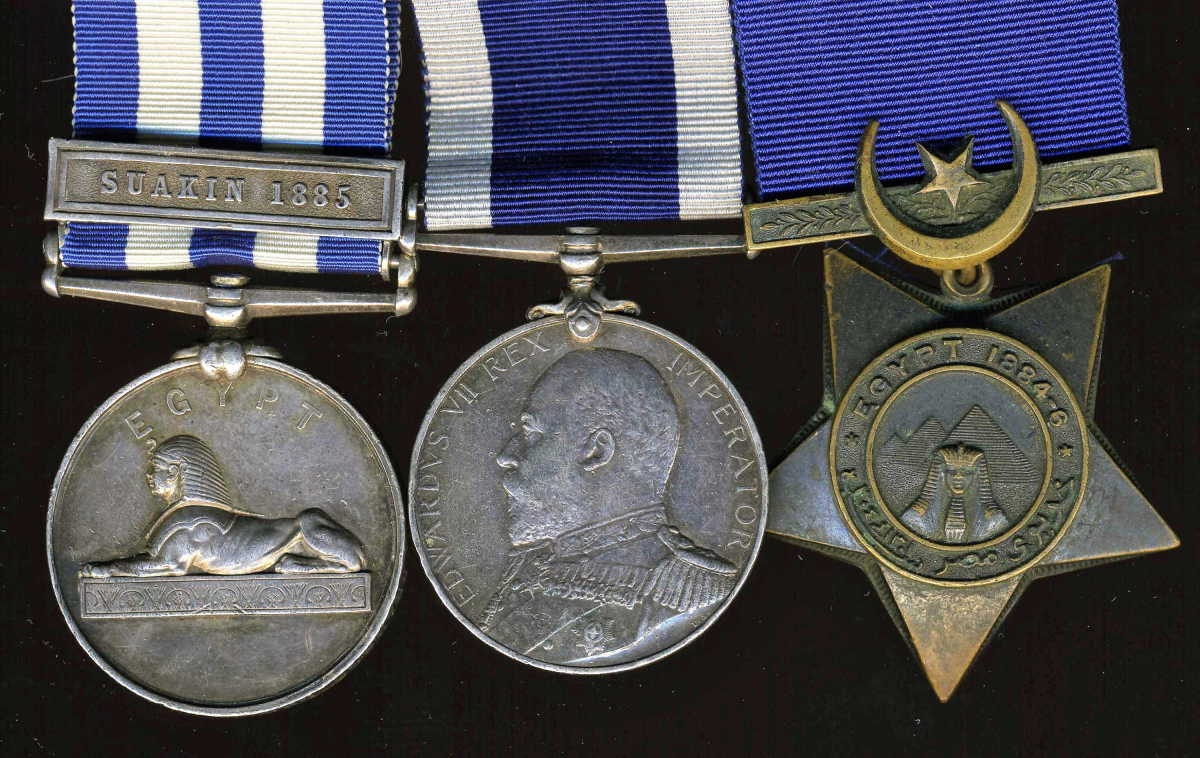