James Rigby : Marshalman to the King. 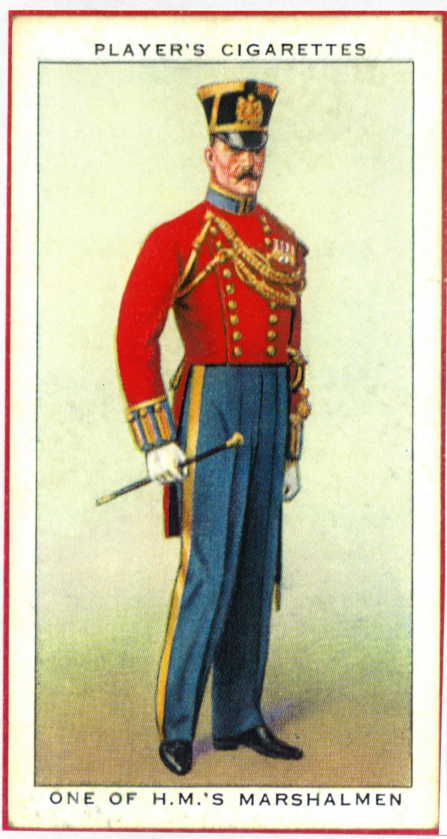 James Rigby had a most interesting and varied career and ended up with a fascinating combination of medals, but the point of this article is as much about the value of finding the right records as about his military comings and goings.

Rigby was born in Escomb near Bishop Auckland, Durham, in 1861; a Grocer’s Assistant, he attested for the 1st Grenadier Guards in 1880. Rigby must have been a sharp man – within only three years, he was a Sergeant in the 1st Battalion and an Instructor with the Depot at Caterham. As such, he was one of only two Sergeants (and 38 men) of the 1st Battalion to be selected in 1884 for service with the Guards’ Camel Corps destined to operate along the Nile for the relief of General Gordon at Khartoum. These men were very carefully selected – amongst other qualities, they had to have over two years’ service, be medically fit and be qualified marksmen or known good shots. The recommendation records which survive in the Guards’ archives in London show that Sgt. Rigby, apart being a marksman and a musketry instructor, was considered to be “a good man”. 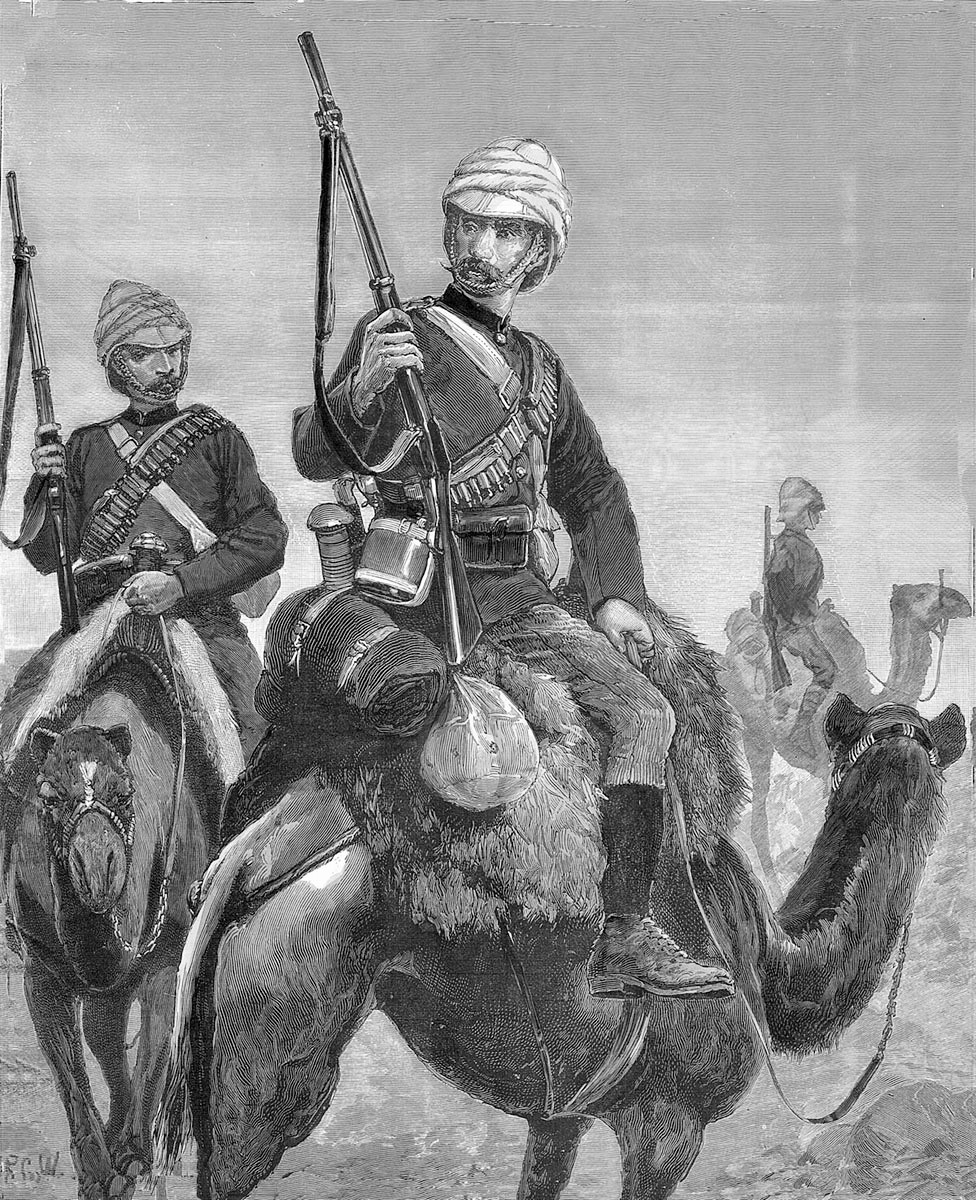 Within a week of being ordered to assemble on 15th September 1884, the 1st Grenadier Guards company was equipped for tropical service as “mounted infantry” (it would be on camels!) and en route for Egypt. The Guards’ Camel Corps served throughout General Wolseley’s carefully planned advance down the Nile towards Khartoum. The story of their long journey, along with the Heavy Cavalry Camel Corps, Mounted Infantry, the Naval contingent and others, is well told in the book “With the Camel Corps up the Nile” by Lieut. Count Gleichen of the Grenadiers. Published in 1889 (and recently reprinted in paperback), it tells of their training in Egypt, their learning to ride camels and drill and manoeuvre with them (which apparently was not as difficult as it might seem!) and then of their long, slow advance down river, where heat and dull rations was as much a problem as anything else. 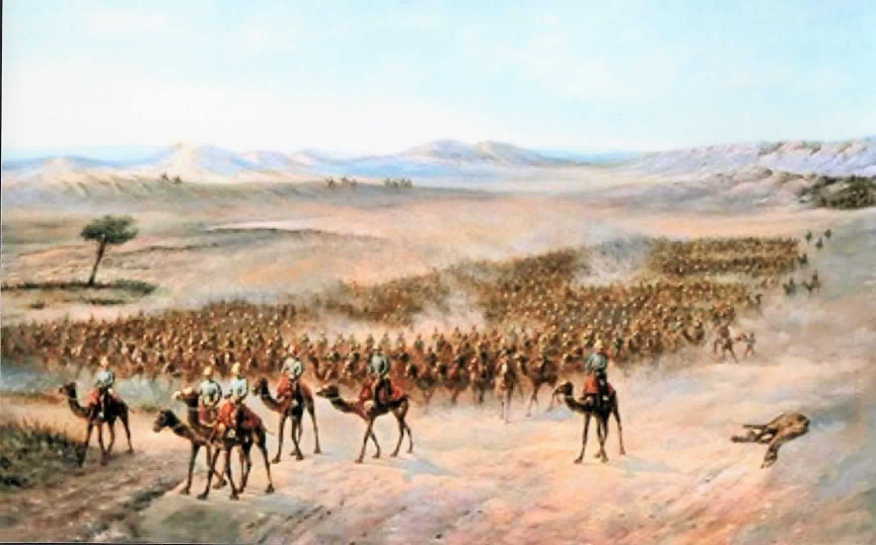 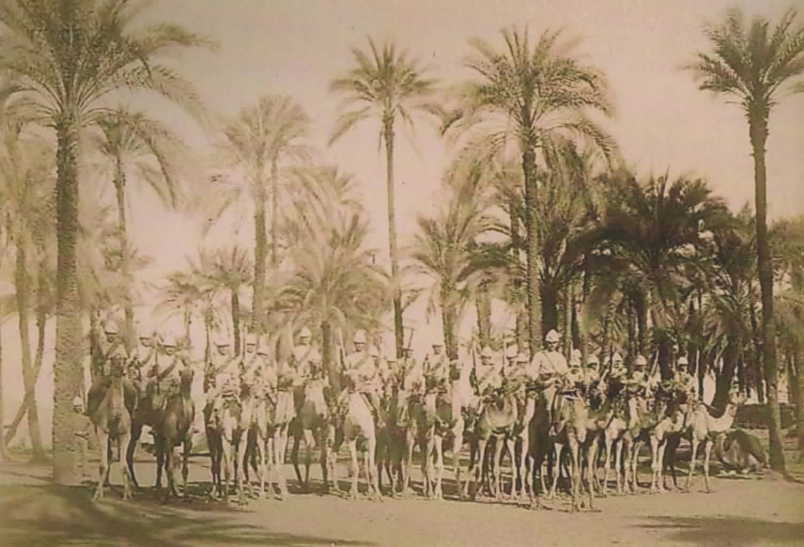 The Guards’ Camel Corps, with Rigby in it, was part of the “strike force” of only 1500 men sent from Korti across the barren Bayuda desert to reach the Nile near Metemmeh, cutting off the great loop of the Nile which the rest of the army (the “River Column”) was laboriously following southwards. It was this weak “flying column” which fought the severe action at Abu Klea on 17th January 1885, when thousands of dervish warriors, in excellent formation and showing absolute contempt for their enemy, flung themselves against a British square. Count Gleichen was very impressed with the enemy’s tactics and discipline and by their reckless courage. 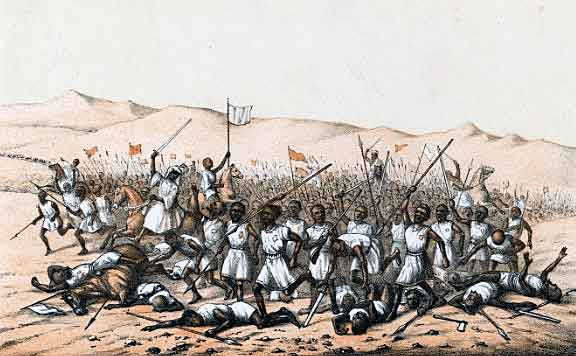 The Grenadiers were on the right face – out of the action really – when the square met the full force of a sudden enemy attack by 4,000 ansar warriors. This went in at the lower left “corner” and drove back the “Heavies” of the Heavy Cavalry Camel Corps and the Naval Contingent under Lord Charles Beresford (whose Gardner machine-gun jammed at a critical moment). The outcome looked very much in doubt, as the Sudanese actually broke into the rear of the square, killing the transport drivers, the camels, the wounded and anyone else within striking range. The situation was only saved by the cool discipline of the officers and men of the rest of the square. 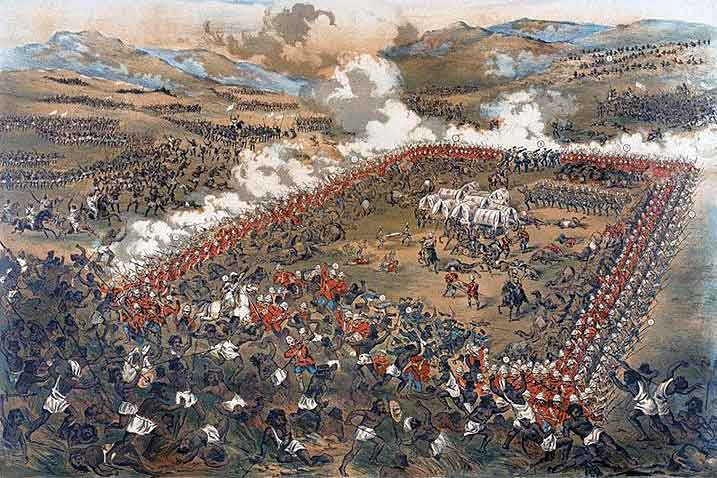 A Victorian print of the battle – but the Desert Corps did not wear scarlet! 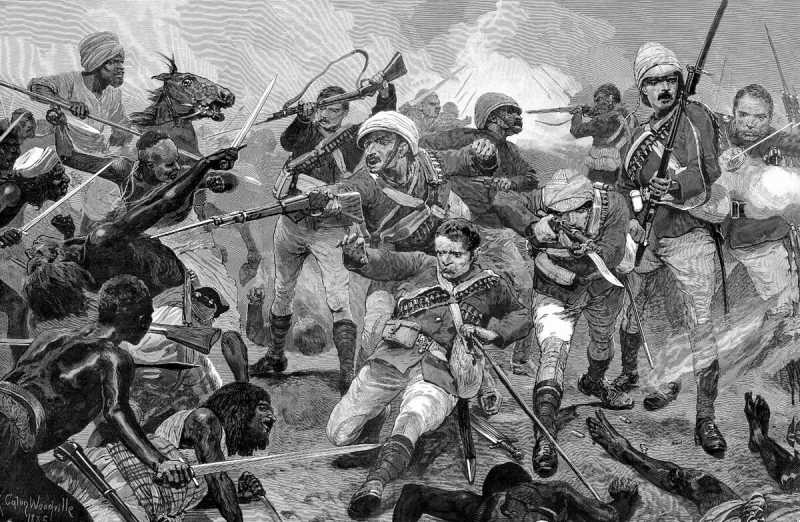 The British were fighting in two ranks, so the rear rank was ordered to face about and fire into the centre of the square. This undoubtedly caused casualties amongst the British “Heavies” and sailors still engaged in desperate hand-to-hand combat, but it also saved the day. The sheer firepower brought to bear at close range decimated the Sudanese and drove them back. At the end of the day, they suffered about 1,000 casualties, with the small British force badly mauled, with 74 dead and 94 wounded.

A few days later, this same Camel Corps fought another action at Abu Kru (or Gubat), where the 1st Grenadiers were in the thick of it, before finally reaching the Nile south of Metemmeh. The casualties in wounded and sick reduced the fighting force to less than 1,000 men – a perilously small number isolated close to a very powerful enemy. 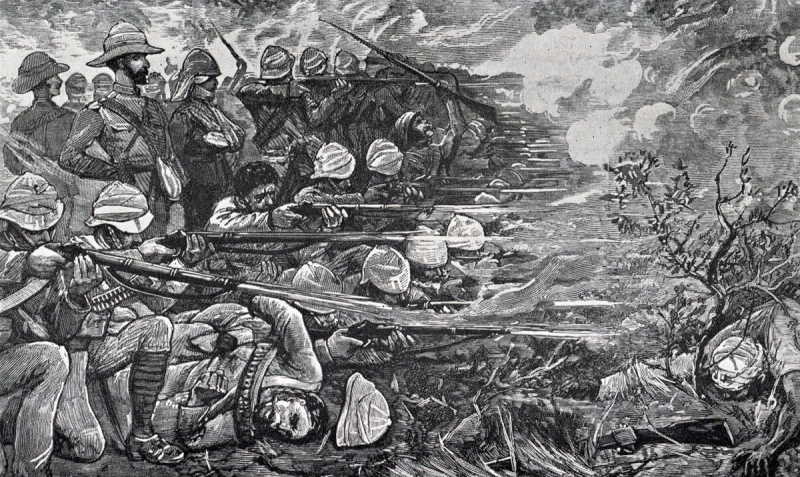 The square at Abu Kru

As is well known, Wolseley’s relief force did not reach Khartoum and did not save Gordon. It was destined to wend its weary way all the way back along the Nile and the Grenadiers spent months around Dongola doing very little (in awful heat) whilst the government decided whether or not to renew the campaign and order another attempt on Khartoum. In the end, it did not and the Guards were finally freed from the Sudan in June 1885, arriving back home in London in July.

Rigby continued his service in the 1st Grenadiers for another 15 years, spending much time as an Instructor of Musketry and was discharged in 1902 after 22 years’ service. He then held the undated Egypt medal with clasps “The Nile 1884-85” and “Abu Klea”, the Khedive’s Star for 1884-86 and the Long Service and Good Conduct medal.

However, all this is not the point of the story. Rigby’s medal group also has a Coronation Medal for 1902 and one for 1911 as well as three 1914-18 medals, named to him in the Essex Regiment. As all researchers of 1914-18 soldiers’ papers will know, their survival is very much a matter of chance – whether you get the full set, a few fragments or (more often than not) nothing at all is in the lap of the gods. Fortunately, in this case Rigby’s papers for 1914-18 do survive in the National Archives and they make interesting reading. Without them, one might be tempted to think that the 1914-18 trio named to J. Rigby, Essex Regiment, was not to the same man as the Abu Klea veteran (perhaps his son) and that the 1902 and 1911 Coronation medals were simply “added” to the group for effect, since they are not referred to in his army discharge papers.

It was some time before I noticed on Rigby’s papers for re-enlistment in 1914 that his occupation was given as “King’s Marshalman”. I really had no idea what this might be and even thought at first that “King’s” might be a company name! However, it was easy to find the answer and I soon discovered that the Marshalmen were officials of the Lord Steward’s department of the Royal Household. In fact, they were an ancient and quite select body, dating to 1236. Their original function had been actually to act as marshals on royal occasions – literally crowd-control officers, to keep back spectators and others from the person of the monarch and to organise the movement of visitors and others at royal functions. By Rigby’s day, there were only six at any one time and their role was much more a ceremonial duty, waiting in attendance on the royal family at formal functions and with duties in the organising of the flow and disposition of visitors and spectators. Their military-looking ceremonial dress uniform was quite colourful and they carried a small staff as a symbol of their former power over crowds!

Rigby earned his 1902 and 1911 medals as a functionary of the royal household, actually being present in the Coronation ceremonies in London as well as at other important functions, like the State Opening of Parliament at various times and the royal records in the Windsor Castle archives confirm his army service. When war broke out in 1914, Rigby was released from royal service to re-enlist in August and was posted to the 11th Essex Regiment in September, almost immediately being restored to his last Guards’ rank of Regimental Quartermaster Sergeant. With the 11th Essex, Rigby (then in his mid fifties!) saw active service from August 1915 in the Ypres salient, at the battle of Loos and through the Somme fighting in 1916 – again corroborated and stated in the Windsor archives. The battalion suffered very badly on the “First Day of Loos” on September 25th 1915 and on the Somme in August-September 1916 and I suppose that Rigby, as Regimental Quartermaster Sergeant, would at least have been caught up with the effects of the fighting, if not actually in the front line.

Rigby was discharged on 4th April 1917, presumably on the grounds of age (56) or physical condition, and immediately went back to his post as one of King George V’s Marshalmen. He continued in this ceremonial office until 1928, when he retired to live in Chigwell and died there on 9th August 1931, aged 71.

Rigby’s medal group is a very interesting combination – there cannot have been many men at Loos in 1915 or on the Somme in 1916 who had been in the Camel Corps at Abu Klea in 1885! But the point is that without the survival of his 1914-18 papers, it would have been far more difficult to tie the group together as one man’s entitlement, given the time scale it represents. Once again, as all medal collectors know, the research and the records are the key in reconstructing a soldier’s career and getting the full story out of a group of medals!