Fighting on the Cape Frontier 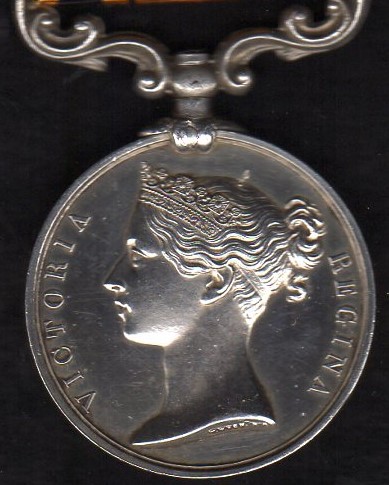 In the days before the opening of the Suez Canal in 1867 – and even afterwards – the route to India, Australia and the Far East via the Cape of Good Hope was a vital commercial link. Because of Britain’s growing trade with India and the East, it became paramount for her to control this base and its surrounding areas and from 1800 onwards, she expanded her domination over the Cape hinterland. In 1806, Britain took the nascent Cape province from the Dutch and over the next eighty years, on the principle of ‘defence in depth’ – pushing your defensive perimeter further from the threatened point (in this case, Cape Town) – she engaged upon a gradual inland expansion. British ambitions forced the old-established Dutch pioneer settlers (the Boers) to move out of the Cape region across the Orange and Vaal rivers in “the Great Trek” after 1835, leading to the formation of the northern Boer territories, the South African Republic (or Transvaal) and the Orange Free State.

British and Boer expansion not unsurprisingly brought conflict over land occupation with the existing African kingdoms and states, some of which (most famously the Zulu and Basotho) were militarily powerful neighbours. The desire to seize land was exacerbated by the discovery of huge reserves of diamonds in Griqualand West in the early 1870s, which increased the tension between Britain, the Boers and local peoples. The result over the period 1835-81 was a series of wars, known once as “Kaffir Wars”, but now less contentiously referred to as the Cape Frontier or Xhosa Wars. Most took place in the eastern Cape province.

The first general medal for service on the Cape frontiers was the South Africa Medal of 1853. Despite its date, it was actually awarded retrospectively for participation in one or more of three serious campaigns against local tribes – in 1835-36, 1846-47 and 1850-53. Much of the action – and there was some fierce fighting – took place in the Amatola highlands, the Perie Bush and Waterkloof area and leaders like Chiefs Sandili of the Gaika (Ngqika) and Moshoeshoe of the Basotho proved to be competent, resilient and dangerous enemies. Recipients of the medal may have served in more than one of these frontier wars but only the medal roll will confirm which. 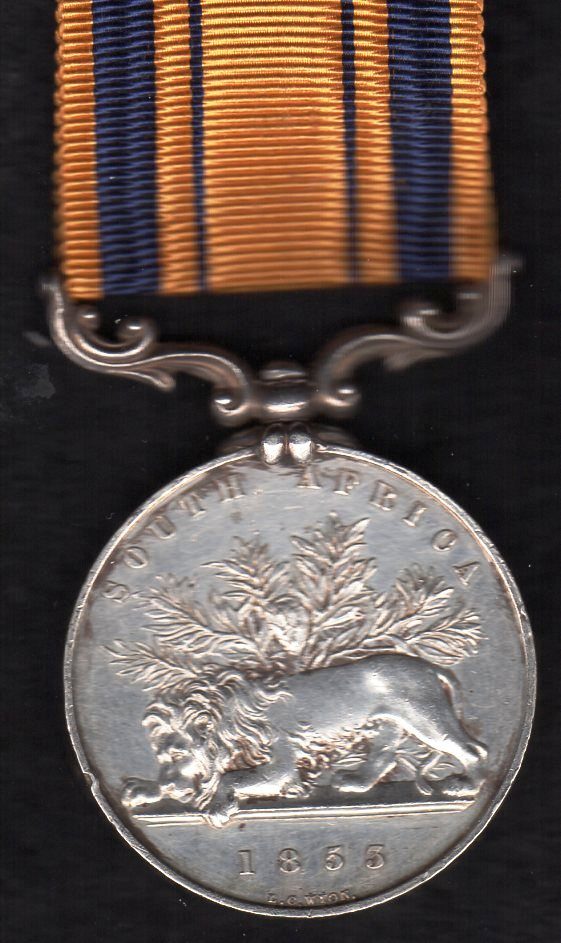 The obverse design features the familiar “young head” of the Queen by William Wyon, with titles, while the reverse has a protea bush in front of which is a lion “couchant”. This design caused some adverse comment – it was meant to symbolise “the lion of Africa kneeling in submission”, but it was pointed out that it also could be taken to represent the “British Lion” being subdued or wounded. It carried the award’s date of institution 1853 in the reverse exergue.

Medals were only given to survivors and were impressed with personal details at the Royal Mint; those to naval forces (which do not carry the ship’s name) are scarce and were only conferred for the last of the three campaigns. Medals to the approx. 190 men who survived the famous sinking of HMS “Birkenhead” on 26th February 1852 are particularly prized and expensive on the market.

What was essentially the same medal and ribbon (but with 1853 replaced by an African shield and crossed spears) and designated The South Africa General Service Medal, 1877-79, was awarded for the complex series of campaigns fought on the Cape Frontier between those dates. It is sometimes rather generally and wrongly referred to as ‘the Zulu War Medal’ but in fact the Zulu campaign of January-September 1879 was only one of many ‘native wars’ on the frontier which attracted the award of this medal. 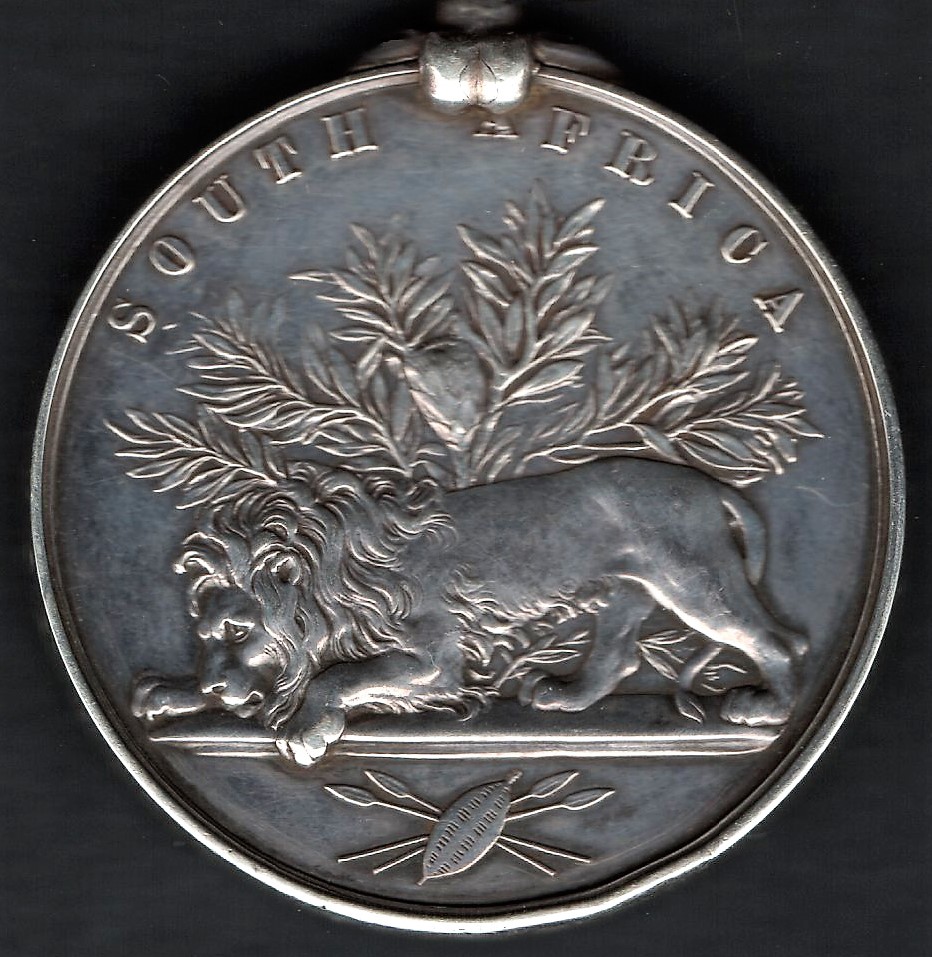 The altered reverse of the South Africa medal, for the 1877-79 campaigns

It was originally proposed to award the medal with clasp Caffraria 1877-9 (after the old term for the border region) and/or Zululand 1879 and/or Basutoland 1879 but in the end the authorities – who seem to have been somewhat confused by the variety of enemies and campaigns! – produced a more complicated arrangement of dated bars which reflected the year in which the recipient had seen active service, rather than reflecting the area.

The various dated clasps eventually authorised in August 1880 and in 1881 were for operations against: 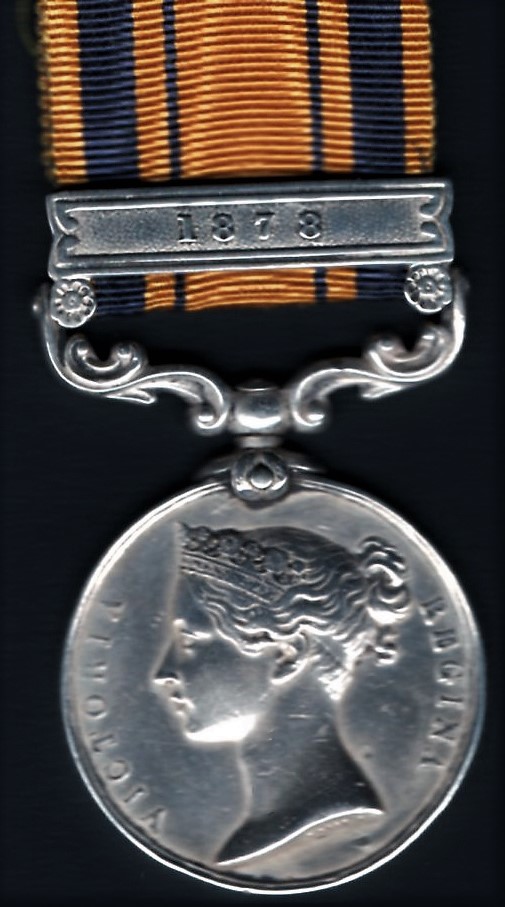 It is interesting to note that applicants who had already received the 1853 medal (i.e. over 25 years earlier) should have received only the appropriate dated clasp, to add to the existing medal, but examples of this are very rare, with only approx. 20 recorded and few ever seen.

Comparatively few British units were engaged in some of the smaller frontier campaigns before the Zulu War – notably the 88th, 1-24th and 2-24th, the 90th, the 1-13th, elements of the Royal Artillery and small Naval Brigades. Some fairly large colonial units took part in these campaigns, like the famous Cape Mounted Riflemen, the Frontier Light Horse, the Natal Light Horse or the Cape Yeomanry, who could muster a good show of strength. But most of the medals went to scratch-raised and often very small and evocatively-named local colonial units, like the Bolotwa Volunteers, Ferriera’s Horse, the Lydenburg Rifles, the Grahamstown Rifle Volunteers or the One Star Diamond Contingent, to name but a few of many. Some – like the Natal Native Contingent or Fingo Levy – comprised African personnel (often drawn from the Swazi, Basotho or Zulu) under British or Boer officers. Many comprised only handfuls of local volunteers drawn from the farming, commercial or mining communities, many of whom could not be traced later to receive the medals prepared from the rolls. This means that medals to some colonial units are very hard to find and more expensive.

By far the most famous campaign for which the medal was issued was the Zulu War of January-September 1879. There have probably been more published works on this campaign th 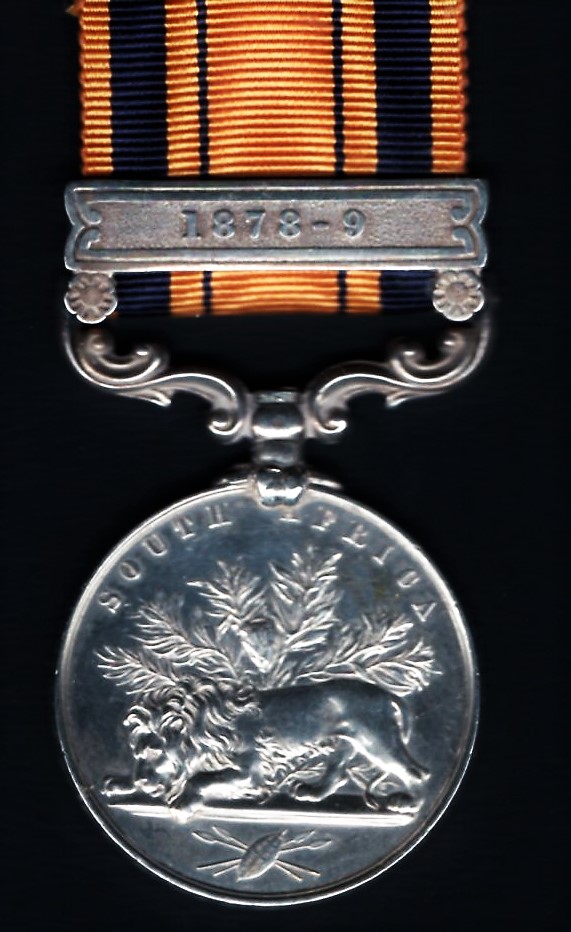 an any other colonial ‘small war’. This intense interest was probably sparked by Stanley Baker’s film Zulu, which appeared in 1964, and the publication of the influential and highly-regarded history The Washing of the Spears by Donald R. Morris. Since then, the campaign has been an enduringly popular collectors’ theme. Today, the sheer volume of published works on the Zulu War has escalated the campaign far beyond its actual historical significance – but it does at least mean that collectors have plenty of reference material!

The invasion of Zululand – deemed to be too potentially dangerous to be allowed exist on the margins of a British-controlled federation of South Africa – began on 11th January 1879 and within less than a fortnight had produced two of the most famous actions in British military history – one a disaster and one a heroic defence.

On 22nd January 1879, part of Lord Chelmsford’s ‘Central Column’ was attacked at its camp at Isandlwana and, in what was perhaps the most crushing defeat inflicted upon a British force in colonial warfare, suffered over 1,300 killed. The honour of British arms was somewhat redeemed when, later that day and into the night, a small garrison of approx. 130 men successfully defended the depot and hospital at Rorke’s Drift. As is well-known, no fewer than 11 Victoria Crosses were eventually awarded for that single action. It is perhaps unnecessary to say that medals to casualties at Isandlwana (mainly 1-24th Foot) are very much collected and, at the time of writing, fetching over £8,000. Equally needless to say is that medals to confirmed Rorke’s Drift men can reach anything over £30,000 depending on how well the recipient is ‘written up’ for the defence. 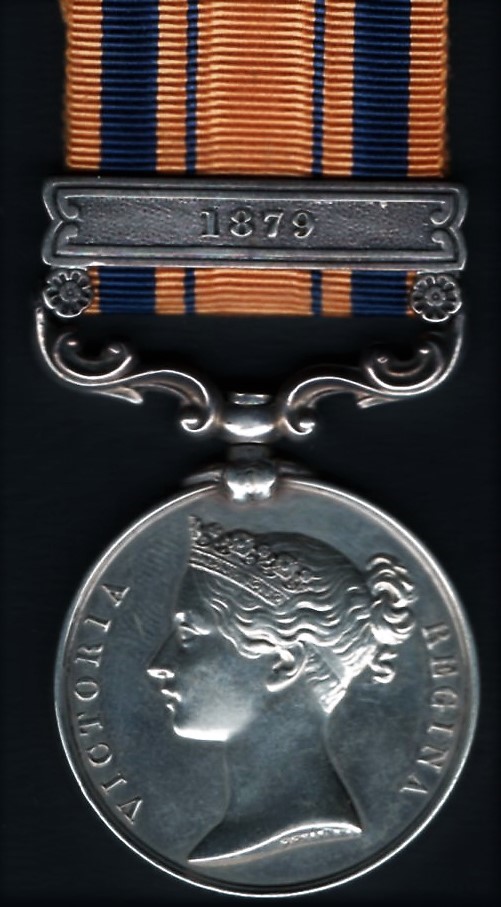 Many of the approx.16,000 men who fought the Zulu in 1879 had been engaged in earlier frontier wars, so received the appropriately dated clasp (e.g. 1877-8-9 or 1878-79), but most of the reinforcements who were flooded into the area to renew the campaign after the disaster of Isandlwana received the medal with clasp simply dated 1879. The multi-dated clasp 1877-8-9 – which covers such a range of military operations – has always been popular with collectors where it includes the recipient’s participation in the Zulu War. Also popular are medals to units which took part in the 1st Boer War or Transvaal War of 1880-81. This largely disastrous campaign (culminating in the serious British defeat at Majuba Hill) unsurprisingly produced no medals of its own (apart from gallantry awards) so that South Africa medals to units which went on to be engaged against the Boers in 1880-81 are keenly sought after. Examples are those to the 3/60th Rifles, the 58th, 91st, 92nd and 94th regiments.

For the Zulu operations, medals without clasp were awarded to mobilised forces, both British and colonial, who were based in the frontier zone but did not cross into Zululand (e.g. the Durban Volunteer Artillery) and to naval forces who only served on RN warships and transports in support operations off the coast; naval personnel who landed and actually served in the campaign received the appropriate dated clasp. 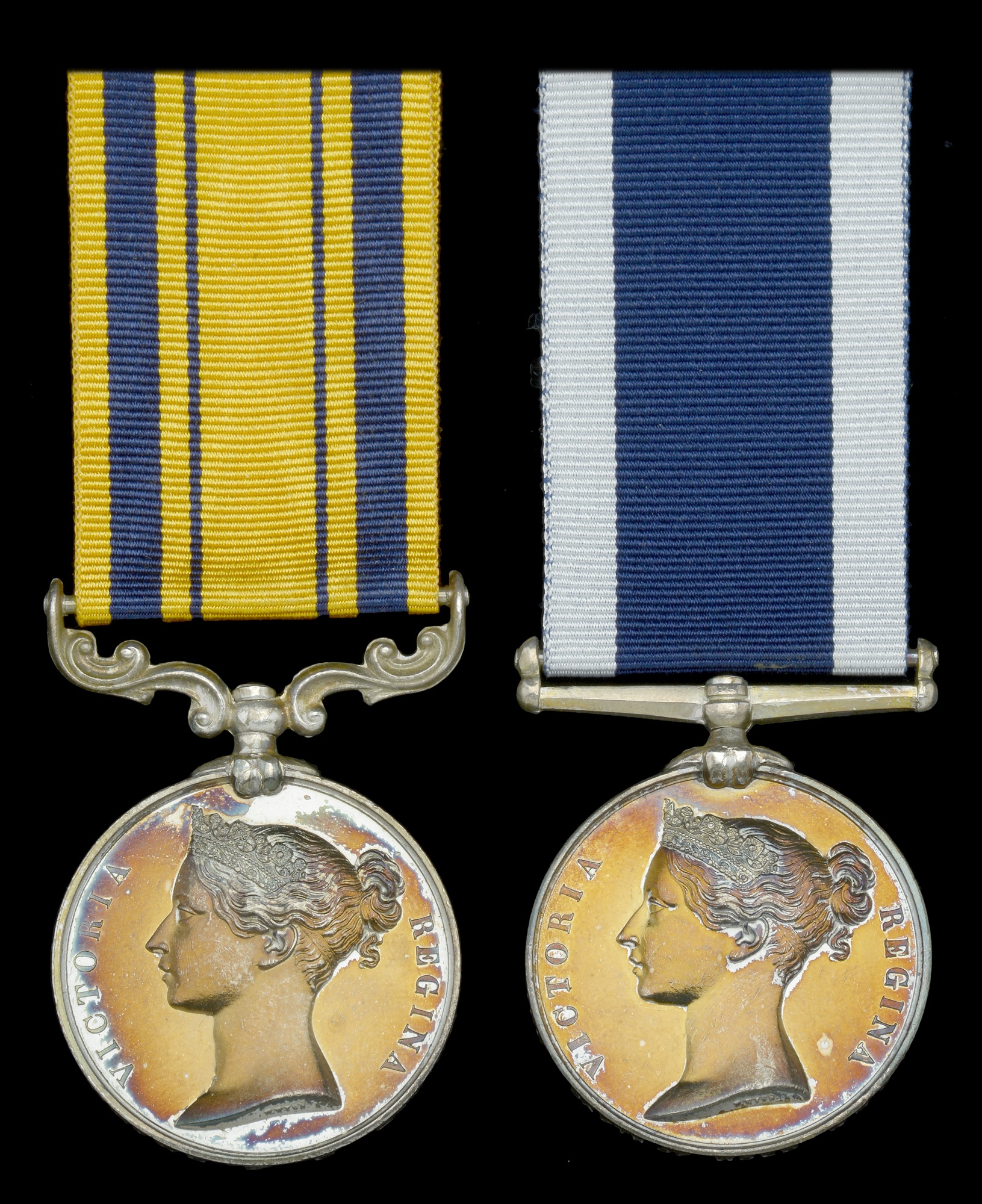 South Africa 1877-79 without clasp and Naval Long Service – to a naval recipient. Naval crews who did not serve ashore received the medal without clasp.

It is important to state, however, given the popularity of the Zulu War, that not all medals with dated clasp 1879 or incorporating that date (e.g. 1878-9) reflect anything to do with the Zulu – men could earn these clasps for service against other African communities and leaders in 1879, like (e.g.) Sekukuni or Morosi, without ever seeing a Zulu warrior! Some soldiers of the 80th Regiment and a large number of scratch-raised colonial units would fit this bill, so if you are looking to buy a medal for the Zulu War, check the medal roll first!