The Great Exhibition 1851 – a medallic extravaganza!

If we are ever tempted to think of Victorian society as staid, restrictive, strait-laced and un-enterprising, we only have to consider the sheer creative genius of the century – its great designers and inventors  or its great architects, scientists and thinkers – to dispel that stereotypical view. It never ceases to amaze just how inventive and creative the “strait-laced” Victorians could be; “thinking outside the box” and accepting revolutionary new ways of seeing and doing were common enough occurrences throughout the century.

One of the most remarkable manifestations of Victorian forward-thinking and inventiveness (as well as a typically Victorian “can do” attitude) was surely “The Great Exhibition” of 1851, housed in a revolutionary custom-designed building in Hyde Park. What Punch dubbed “the Crystal Palace” was in itself a remarkable achievement; intended to be a temporary construction, it was designed by Joseph Paxton and inspired by his own work at Chatsworth and probably by Decimus Burton’s Palm House at Kew. The product of advanced thinking in terms of structural engineering, in mass, factory production (e.g. in sheet glass and cast iron) and in standardised prefabrication, it was a magnificent achievement in it own right. The organisation of the huge exhibition and its many displays was equally impressive. 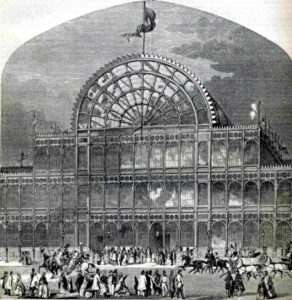 “The Crystal Palace” : one of the main entrances to the Exhibition, from a contemporary newspaper.

The Exhibition was the brainchild of an impressive committee of experts, which included famous names like Brunel, Stephenson, Cubitt and Barry and members of the Society of Arts, supported eventually by nearly 300 local committees, drawn from businesses and manufacturers of all kinds. They were effectively and enthusiastically supported by Prince Albert, the Price Consort, as Patron. The Committee’s aim was breath-taking in its ambition – to be “the World’s Show” and famously to display “the works of industry of all nations” in one place. This meant examples of the latest in design and technology in all fields, new inventions large and small – from huge pieces of industrial machinery down to pen nibs – displays of natural resources from all over the globe and fine design in a large range of materials (ceramics, wood, metalware, furniture, textiles, jewellery etc.); it intended to put on public display simply the best in contemporary design, production and innovation from all around the world. In the end, many countries displayed their wares in the exhibition – like France, Belgium, Austria, Prussia, the USA, some of the German and Italian States, India, China etc., bringing a degree of novelty and even exoticism before the British public in a way never seen before. There was a remarkable total of over 100,000 exhibits displayed by 14,000 exhibitors, occupying a million square feet of floor space and the sheer range of goods, raw materials and products on display was simply staggering. Of course, in displaying these elements of international industry and design, the originators of the exhibition intended to visibly demonstrate the overwhelming superiority of British manufacture and invention and the displays, inventions and products of British goods dominated the exhibition. These were displayed in 30 different categories, with a particular type of product or material in a specific place grouped with similar goods, whilst those from overseas were simply displayed by country. 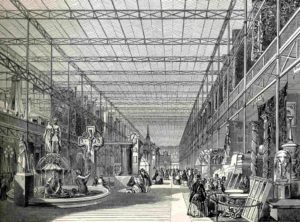 One of the main halls in the Crystal Place. The displays were on two levels. 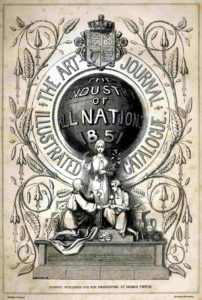 People flocked in their thousands from all over Britain (and abroad) to see the exhibition and special cheap “exhibition trains” were laid on to bring families from provincial towns to the capital. Hotels, lodgings and ad hoc guest houses were quickly overwhelmed by the demand and for a while the authorities were seriously concerned at the size of the crowds flooding into the capital, with fears of large-scale public disorder or a rise in street crime, drunkenness etc. In the end, between the exhibition’s grand royal opening on 1st May 1851 and its formal closure to the public on 11th October, no fewer than 6,000,000 people are believed to have visited “The Crystal Palace” – up to 100,000 a day at a maximum – representing a significant proportion of the British population. Most paid the standard entry price of one shilling and a huge profit of £186,000 was made with revenues from admission and cloakroom fees. The Queen herself visited on no fewer than 34 occasions. Indeed, so successful was the whole enterprise that “The Crystal Palace” – meant to be a temporary one-time exhibition venue – was taken down and reconstructed, with additions, on a new permanent site in Sydenham in 1854. Here, it continued to be a major exhibition and festival venue, as well as a popular tourist attraction, until November 1936 when a disastrous fire destroyed the main complex.

Souvenirs of the Crystal Place were produced in bewildering numbers and forms and in all sorts of materials in 1851 but in purely numismatic terms, the Great Exhibition was surely the most productive event of the C19th. Such was the Great Exhibition’s hold on the public’s imagination that a large range of medals, tokens and medallions was produced between May and October 1851, and previously unknown types are still being discovered. Apart from the official bronze medals produced as awards and rewards by the organising Council and largely to given to dignitaries, administrators, judges and exhibitors, a huge array of medallions, medalets, trade tokens and related material was privately produced and sold for profit. Some medallions, sold on street corners, were intended as simple, cheap mementoes, costing only pence and available for all to purchase as souvenirs of their unique “day out” at the Crystal Palace; others were well-designed, expensive and more exclusive. 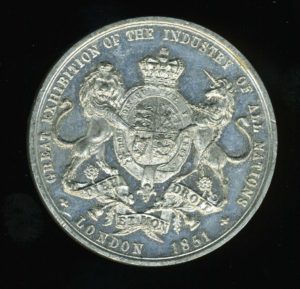 The non-official types fall largely into two groups – those intended as simple souvenirs and those produced by businesses as commercial advertisements. The former, of which more than 70 different types are known, celebrated the construction of the Crystal Palace and commemorated the Exhibition, with many showing the building itself, with statistics on its size and construction; they usually feature the profile of the Queen or Prince Albert, or both conjoined. These commercially produced souvenir types are found in a large range of materials, sizes and designs from cheap-and-cheerful penny souvenirs in alloy, about the size of some contemporary coins, to large and beautifully executed art pieces in bullion metals, suitably expensive then and now. Many types were produced by Messrs. Allen and Moore, while one specially licensed manufacturer, W. J. Taylor, struck cheap souvenir medallions actually in the Crystal Place and is believed to have produced up to 400,000 examples!

r industrial and trading concerns down to small shop businesses around the country (and five foreign nations), served to advertise not only the firm’s presence in the prestigious exhibition but also, of course, the fact of their existence, their product and their address. To combine both souvenir and advertising potential, some trade medallions were struck within the Crystal Palace and proudly state the fact.  About 70 different types of British and foreign trade token have so far been indentified, though strangely not one from a Scottish business.

Undoubtedly the most attractive and well-designed medallions were those produced as official awards. The designs were chosen an after an open competition and selected artists included two members of the famous Wyon family. There were five main types of official award (with slight design differences noted within these types); all were produced by the Royal Mint  and produced in bronze. 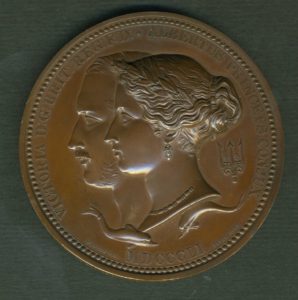 The standard reverse of the larger official medals. 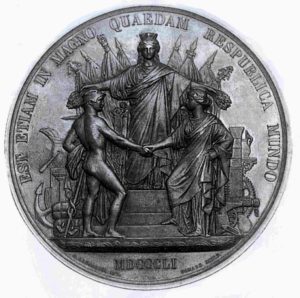 The reverse of the Council Medal – Britannia, in front of the Flags of the Nations, bestows wreaths or crowns on figures representing Industry and Commerce.

The highest (and rarest) awards were the “Council Awards”, given by the organising council for outstanding achievements or contributions. About 170 were produced. They measured 89 mm diameter and were designed by W. Wyon (obverse) and H. Bonnardell with J. F. Domard (reverse).“Prize Medals” were given to approx. 3,000 exhibitors of high merit, selected by panels of specialist Jurors. Slightly smaller at 77mm diameter, they were designed by William Wyon (obverse) and Leonard C. Wyon (reverse). 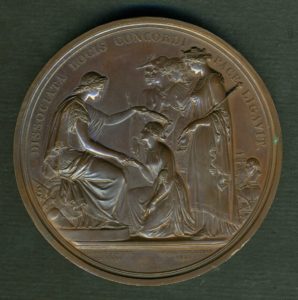 The reverse of the Prize Medal – Britannia crowns and raises a kneeling figure of Industry, while allegorical figures of Europe, Asia, Africa and America look on.

“Jurors’ Medals” were presented to the 318 subject-specialists (like engineers, jewellers, scientists etc.) who had judged the exhibits. 160 of these Jurors were foreigners and 67 other specialists were rewarded with this medal for services as co-opted judges. At 64 mm in diameter, they were designed by W. Wyon (obverse) and G. G. Adams (reverse).
A smaller cased medal, 48 mm diameter, was awarded “For Services” and given to those involved in the establishment and running of the event and to people all over the country who had helped in organising local contributions. Designed by William Wyon. 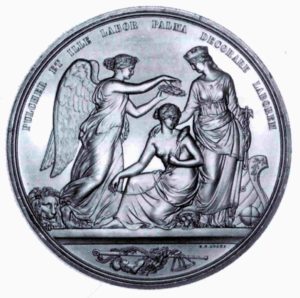 The reverse of the Juror’s Medal, showing a seated figure representing Industry, crowned by Fame and watched by Commerce.

The smallest official award, at 45 mm in diameter, was the “Exhibitors’ Medal”, given to all the 14,000 exhibitors whose products had been on display. It was designed by William Wyon. 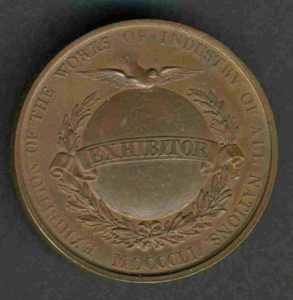 The reverse of the Exhibitor’s Medal – given to all 14,000 exhibitors!

Boxed presentation sets of some or all of these types were specially made up as gifts to local and foreign dignitaries, associations etc.; these full  sets are now very rare.

All the official medals were made in bronze, awarded with a decorative certificate (examples of which are now rare) and given in a fitted case; they were either formally named (machine impressed around the rim with the relevant details) or, in the case of the exhibitors’ awards, had details of their entry number with the class and category in which they were entered. All are identifiable to one person or company via the exhibition catalogues and are therefore researchable – which adds a great deal to their interest. The medallions were no doubt prominently displayed and treasured by their recipients.

With such a wealth of numismatic material available from the Crystal Palace, examples are not difficult to find and many are relatively inexpensive, enabling the collector to assemble a large and interesting collection. They would make a great exhibition!

The cased Exhibitor’s Medal, showing the effigy of Prince Albert.

Illustrations of the main official medals from a contemporary magazine.

The most comprehensive catalogue of the medals is L. L. Allen’s “The World’s Show”, produced by Coincraft, London, 2000; a good general account of the construction and the exhibition is “The World for a Shilling”, by M. Leapman, Headline, 2001; a more detailed academic discussion is in “The Great Exhibition of 1851: a Nation on Display” by J. A. Auerbach, Yale University Press, New Haven and London, 1999.