“Sunrise in the East”

“Sunrise in the East”

The medal awarded for the Waterloo campaign of 1815 is generally regarded as “the first British war medal” – granted to all those present in a designated area at a designated time and given to all in the same format (a circular silver medal suspended from a coloured ribbon) regardless of rank or achievement. But its issue was far more a reflection of the importance of the event rather than the sign of any desire on the part of the British authorities to start issuing campaign medals for soldiers as a regular procedure.

In reality, in the generation after Waterloo, there were in fact no official British medallic awards to soldiers or sailors simply for campaign service. Not until the Afghan and China wars of 1839-42 did “war medals” make their appearance and after that their issue became standard practice for those wars or expeditions deemed to be of significant importance.

The re-appearance of war medals after Waterloo can be traced to the Anglo-Indian invasion of Afghanistan in 1839, under the authority of the East India Company, whose aim was to put on the throne in Kabul the (hopefully) pro-British Shah Shuja-ul-Mulk, who would ensure that the strategically important country would remain a British client or at least not fall under Russian control.

The British invasion in 1839 by the 29,000-strong “Army of the Indus” was initially successful (from a military point of view) and following the occupation of Kandahar in the south, the invasion force headed northwards for Kabul. En route, it besieged and captured on 23rd July the important city-fortress of Ghazni (or Ghuznee as then spelled), and then proceeded to occupy Kabul and install Shah Shuja as Emir. In gratitude for his restoration, the Emir instituted the now-rare Order of the Doorani Empire to reward officers who had distinguished themselves in his service and also announced that he would award a medal to all British and Indian forces which had taken part in the storming of Ghazni. The new medal would be produced at the HEIC mint in Calcutta and steps were quickly taken to get the process of design, manufacture and award underway.

However, as is well-known, everything soon went downhill in Afghanistan. The Afghans, never willing to accept a foreign occupation, rose in revolt against the British in 1841, besieging some of the occupation centres (like Kandahar, Ghazni and Khelat-i-Ghilzie) and forcing the evacuation of Kabul. In the disastrous “retreat from Kabul” in the bitterly cold winter of 1841-42, most of the British-Indian army which had remained on occupation duty in Kabul was gradually destroyed as it fought and struggled its way back through the mountains towards the Khyber Pass and India. The actual death-toll, taking into account combatants and a horde of non-combatant “followers” and their dependants, has never been fully established, but it amounted to many thousands and represented one of the most serious defeats in British military history. 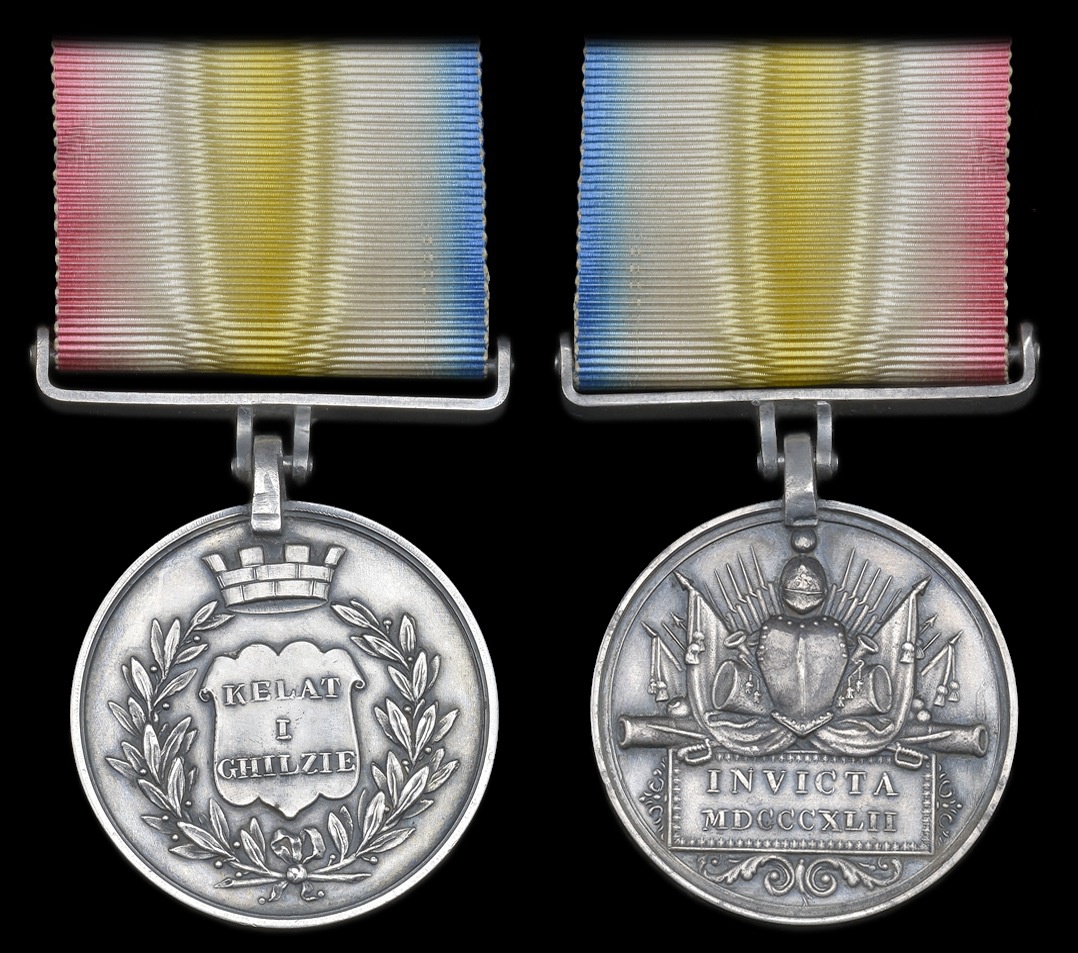 The rare award for the defence of Kelat-i-Ghilzie in 1842.

After such a shocking humiliation, it was almost immediately decided in India that “an army of retribution” would be sent into Afghanistan to restore British authority – and Britain’s sense of self-esteem. In the Summer of 1842, a series of major campaigns was launched to re-establish control of Kabul, Ghazni and Kandahar. When the bloody and difficult war of reconquest was completed, having proved the point of British-Indian military power, Britain in fact abandoned thoughts of actually controlling Afghanistan and not until 1878 – fully 36 years later – did another major Anglo-Afghan war occur and Kabul again came under British occupation – equally briefly.

On the subject of campaign medals, however, the first Afghan War and the contemporaneous “Opium War” in China (1840-42) led to the first mass issue of specific campaign medals since Waterloo. When Shah Shuja was deposed and later killed, the plans for his Ghuznee Medal seemed destined for abandonment, but instead, since the award of a medal had been publicly announced and production commenced in Calcutta, the HEIC itself took up the production and issue of the medal for award to its Indian soldiers “in the name of the Government of India”. The HEIC had in fact been at the forefront of the issuing of war service medals to its soldiers since the Deccan wars of the 1780s and through several campaigns in the early C19th (like Burma 1825-26), so its decision to take up the Ghazni medal was not out of context. However, since British regiments had also been engaged at Ghazni in 1839 and were originally intended to receive the Emir’s award, there seemed to be no reason to prohibit the issue to them and permission to award the medal was accordingly requested from the home authorities and from the Queen – as the “fount of honour”. It was granted in March 1841 and the Ghuznee medal then effectively became a “British issue” – though produced in the Calcutta Mint and paid for by the HEIC. 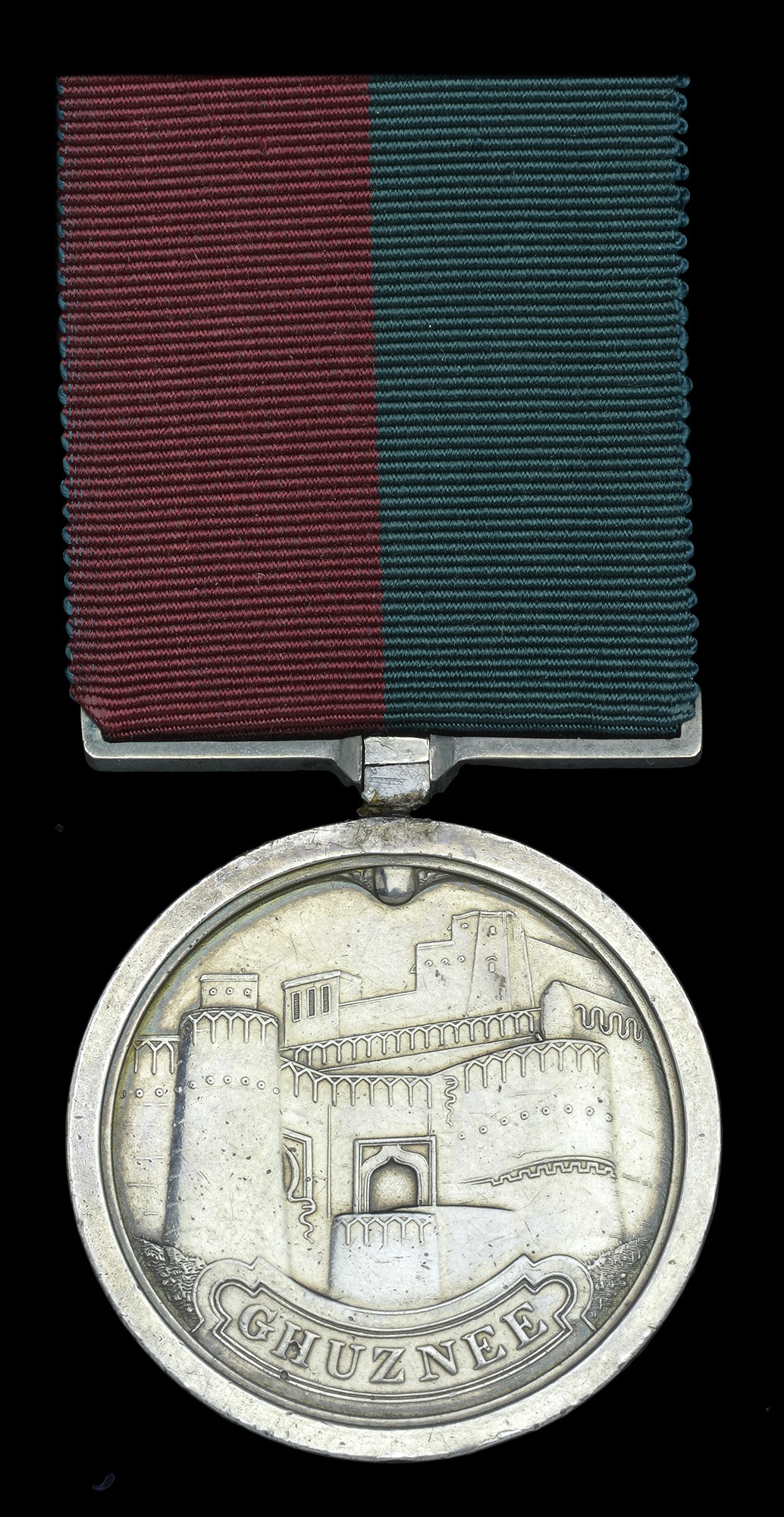 In the same way, the HEICs proposed Indian army awards for the later Afghan campaigns of 1842 and for the China War were extended by royal assent to British units which had been engaged in the campaigns and official permission to receive and wear the medals was granted. This official and “royal” permission was one reason for the appearance of the Queen’s profile and title (“Victoria Vindex” or the more usual “Victoria Regina”) on most of the medals since they officially became “British” awards(*1).

The result in the period 1840-43 was a rash of medallic awards – campaign medals with different reverses (reflecting various campaign areas) for Afghanistan in 1842, including separate awards for the defence of Khelat-i-Ghilzie and Jellalabad, medals with varied reverses for the conquest of the Emirate of Scinde in

1843 and two gunmetal Stars for operations in the state of Gwalior in 1843. Within this period of award we can really see the birth of the basic idea of giving general, standardised medals to military personnel simply for serving in a campaign.

Each of the Indian medals of 1840-43 – in no fewer than 12 types – was to be worn from an identical, wide ribbon, initially to be known as “the India Ribbon” or “the Military Ribbon of India”, with the clear intention that

future medals awarded for active service in India would be worn from the same ribbon. It is a beautiful design -almost a rainbow of colours (crimson, white, yellow and pale blue) – said to reflect the sky brightening and colouring as dawn breaks in India, and nick-named “Sunrise in the East”; it was later revived for use with the bronze Kabul-Kandahar Star of 1880. 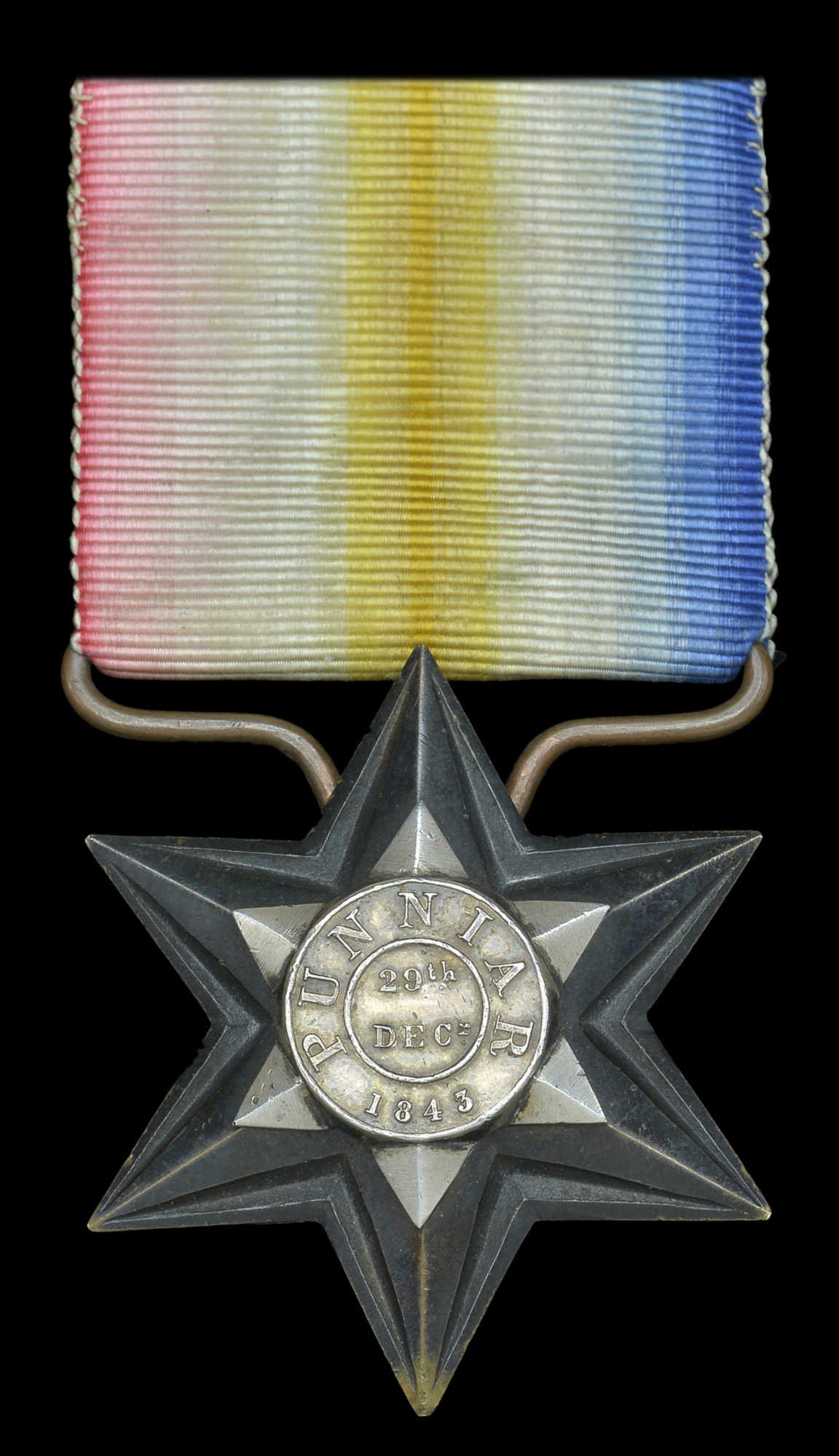 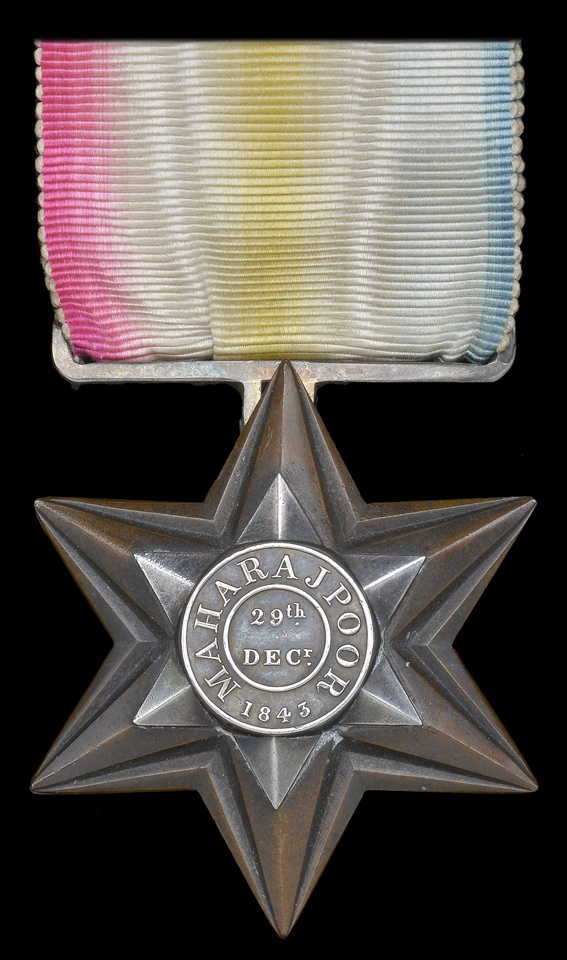 The problem with awarding medals with identical “India Ribbons” was soon apparent – if a soldier had taken part in several different Indian campaigns (and presumably later ones), he would wear on his uniform a strip of identical ribbons, so that an observer would not be able to tell from the ribbons alone which campaigns a man had actually served in.

The problem was easily solved; for the next major campaign – the first Sikh War of 1845-46 – a totally new ribbon was designed and for the 2nd Sikh War of 1848-49, a different one again. The idea of a universal “India Ribbon” was thus quickly put aside. It was, incidentally, the medals for the Sikh Wars  which also introduced the idea of “clasps” worn on the medal – silver bars denoting a particular action, battle or campaign in which the recipient had been present. It was also medals for these campaigns which confirmed the use of a more standardised medal shape (circular), overall dimension, suspension type and metal for future medals to follow – though there would be design exceptions (*2). After 1846, British campaign medals largely took on a standardised appearance which has remained in use down to those of the present day – such as that recently awarded for yet another Afghan intervention. 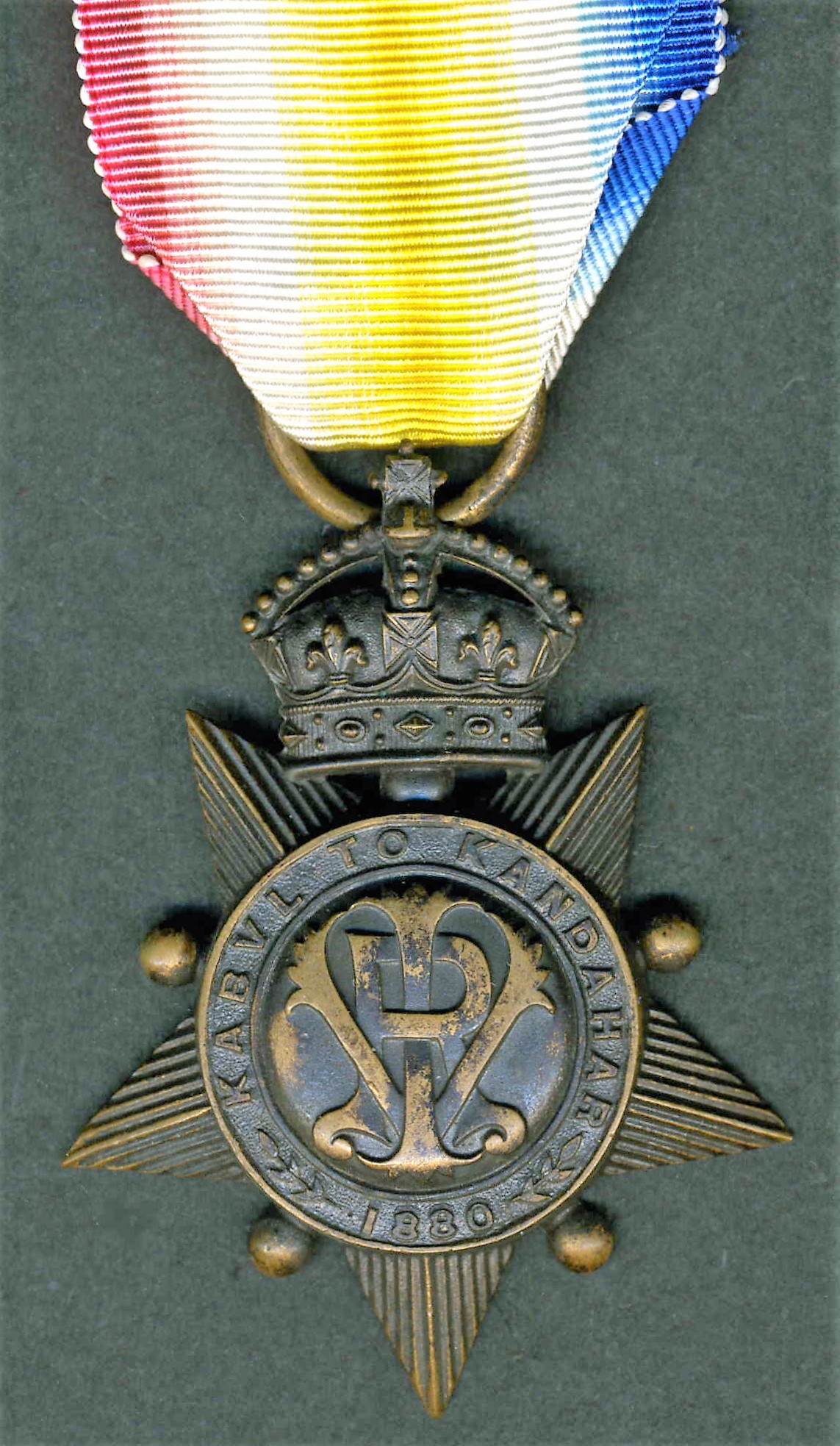 The last outing of “the India Ribbon” – the Kabul-Kandahar Star of 1880.

*1 – The 1839 Ghuznee Medal, which had not originated as a British award, did not show the royal effigy, nor did first HEIC issue for Jellalabad. The design of the medals for Gwalior in 1843, issued as uniface bronze stars, did not lend themselves to carrying the royal profile.

*2 – Such as a few awarded as Stars – like the Ashanti Star of 1896 – or produced in other metals, like bronze awards to Indian and other non-combatant personnel, or with differing suspension types. The basic “look” of British campaign awards has, however, remained remarkably standardised in appearance since 1846.